Accessibility links
In 'Calypso,' David Sedaris Blends Slime And The Sublime Sedaris' new story collection is earthy, to say the least — concerned with all the gross things that happen as we live and age — but also full of wonder at his life, and appreciation for his family. 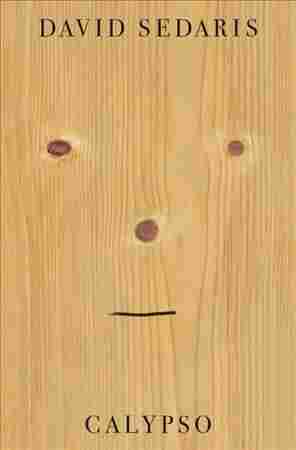 When my brother, sister, and I were growing up, our dinner conversation would inevitably turn scatological at some point, the grosser the better: A kid puked on the teacher's desk, another tracked in dog poop. "Must we talk about this at dinner?" our mother would protest. To which we would answer, "When else are we supposed to talk about it?"

David Sedaris well understands the joys of connecting with siblings over the ridiculous, the outrageous, and yes, the disgusting. His new book, Calypso, is filled with talk of thickening uterus linings, runaway bowels, and the revolting stuff passengers leave behind in airplane seat pockets. (You don't want to know.) Sedaris' nonagenarian father scolds his middle-aged progeny, "Is that any way to talk at the table?"

The 21 entries in Sedaris' winning new collection — not quite half of which are previously unpublished — are now called stories as opposed to personal essays, to avoid further accusations of undeclared exaggeration, like the ones he was hit with in a 2007 article by Alex Heard called "This American Lie." Call them what you will, but with this tenth book, Sedaris demonstrates yet again what makes him the best American humorist writing today: A remarkable ability to combine the personal with the political, the mundane with the profane, slime with the sublime, and hilarity with heart.

Reading Sedaris' family stories is like tuning into a spectacularly well-written sit-com. How will the curmudgeonly father undercut his wildly successful, gay son in this episode? What's causing sister Lisa to worry – or wag her tail — these days? At this point, we feel we know these people intimately – though of course we only know Sedaris' carefully constructed version of them, and himself.

Intimations of mortality hang over this book. Sedaris' conservative father is still dressing up for church and mainlining Fox News, but he's also had his driver's license revoked. Sedaris is frank about their lifelong disconnect, "like a pair of bad trapeze artists, reaching for each other's hands and missing every time." But he's also mindful of the clock running out.

He is also keenly aware that he is approaching the age, 62, at which his mother died in 1991. He still misses her and regrets that she didn't live to see his success. In "Why Aren't You Laughing?" he revisits their evenings full of laughter lingering around the family dinner table, which were like "a master class" in "her speciality ... the real-life story, perfected and condensed" – which, of course, became his specialty too. With obvious pain, he broaches the subject of her alcoholism, regretting that not one of them confronted her or offered help: "Sobriety would not have stopped the cancer that was quietly growing inside her, but it would have allowed her to hold her head up."

Several stories, including "Now We Are Five," deal with the complex emotions following his youngest sister Tiffany's suicide in 2013, just shy of her 50th birthday. When she died, Sedaris hadn't spoken to her in eight years; he calls himself out on having dropped her. But then, while you're still processing his point-by-point self-indictment, he pivots to his deeper subject, key to so much of his work: The central importance of family in his life. He writes that after Tiffany's death, his remaining siblings said "what I needed to hear, something to ease my conscience," and adds, "They've always done that for me, my family. It's what keeps me coming back."

Sedaris demonstrates yet again what makes him the best American humorist writing today: A remarkable ability to combine the personal with the political ... and hilarity with heart.

To facilitate family gatherings, Sedaris has added a North Carolina beach house to his enviable real estate empire, which includes homes in Paris, Normandy, London, and West Sussex. Dubbed the Sea Section, it provides fodder for many of these tales, some of which involve cutthroat games of Sorry! with his teenage niece (the only progeny of the six Sedaris siblings).

Sedaris doesn't let us forget that — driven by discipline, ambition, and a slave-driving Fitbit ­­-- he's worked hard for his success. Stopped by neither snow, rain, nor gastrointestinal viruses, he's a magpie for new material, turning his lucrative reading tours and even his obsessive rubbish patrol along West Sussex roads into narrative gold. Not all of the stories hit home, and some are little more than sketches. But his reaction to the legalization of gay marriage showcases him at his very best: deeply personal, wacky, guffaw-inducing, and tender. (A classic quip: "From the dawn of time, the one irrefutably good thing about gay men and lesbians was that we didn't force people to sit through our weddings.")

Throughout Calypso, Sedaris expresses wonderment at where he is at this point in his life: "This was not the adulthood that I had predicted for myself: an author of books, spending a week in Hawaii with his handsome, longtime boyfriend before deciding which house to return to. I had wished for it, sure, but I'd also wished for a complete head transplant," he writes. That old head continues to serve him well.