Accessibility links
Trump: 'I Wish I Did' Pick A Different Attorney General Than Sessions The president renewed his months-long feud with his own attorney general following reports that he had asked Jeff Sessions to un-recuse himself in the Russia case. 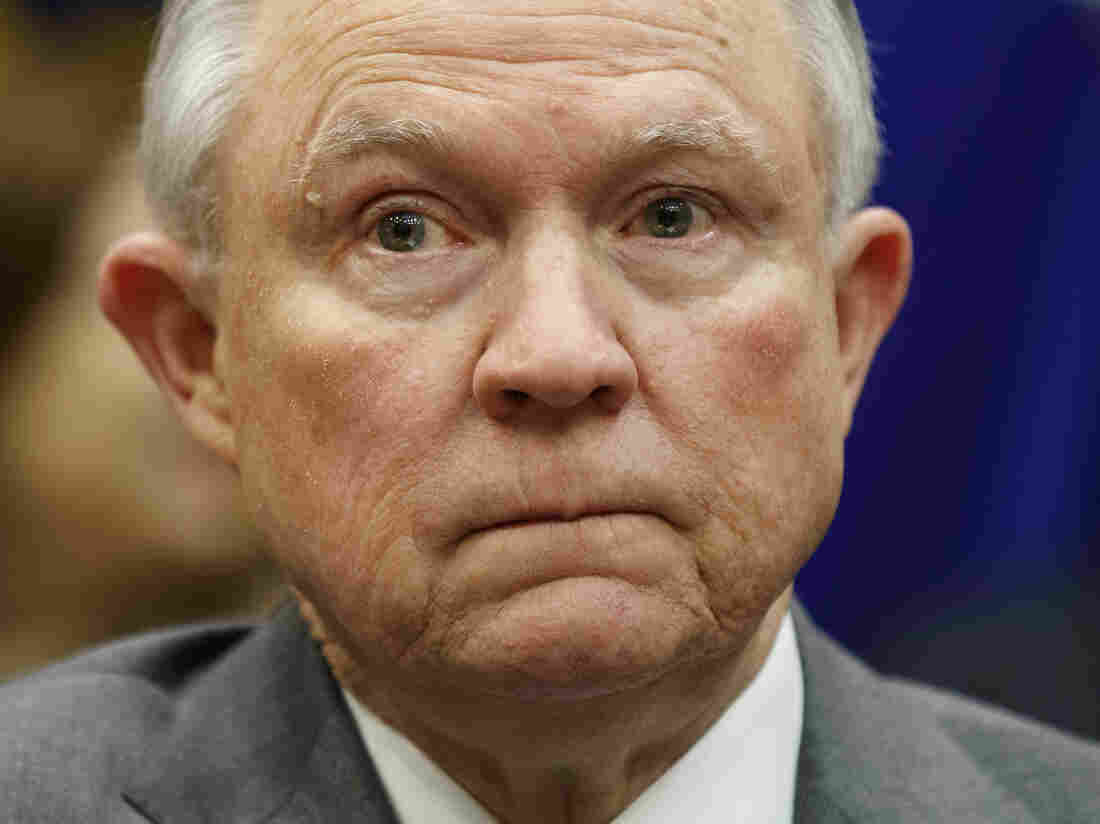 Attorney General Jeff Sessions is again on the receiving end of criticism by President Trump over his recusal from the Russia matter. Evan Vucci/AP hide caption 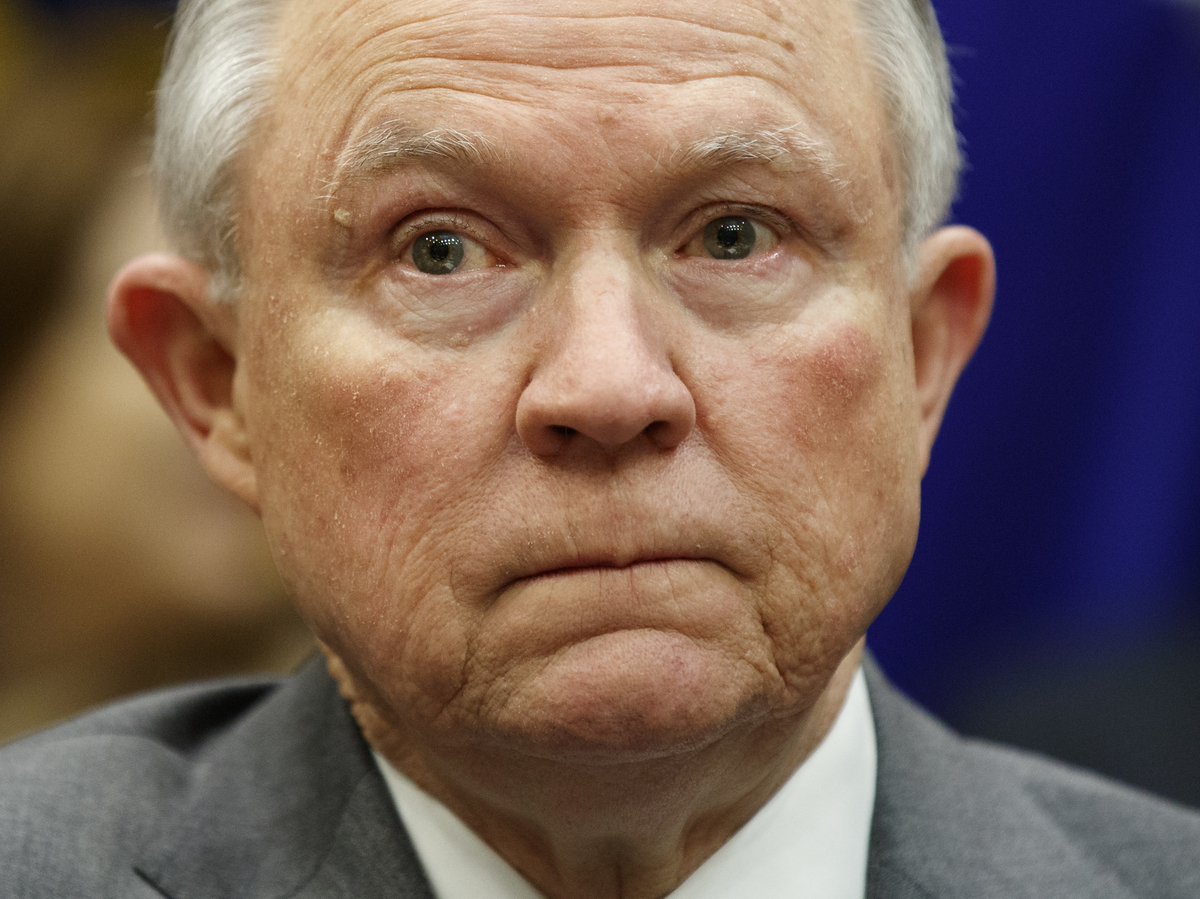 Attorney General Jeff Sessions is again on the receiving end of criticism by President Trump over his recusal from the Russia matter.

President Trump resumed his attacks against Attorney General Jeff Sessions on Wednesday following reports that he had asked Sessions to un-recuse himself from the Russia investigation — and after more erosion of Trump's claim that the FBI spied on his campaign.

Trump used his Twitter account to echo the comments of House oversight committee chairman Trey Gowdy, R-S.C., who has been using TV appearances to try to offer some nuanced support to Trump.

Gowdy told CBS on Wednesday that he could sympathize with Trump's frustrations about Sessions based on what he called Sessions' reticence about his willingness to take part in the Russia probe.

Gowdy said the problem wasn't necessarily that there had been any wrongdoing in that case but that Sessions hadn't said before he became attorney general that he felt he couldn't take part in the matter.

Trump quoted Gowdy and added his own epigram: " ' ... There are lots of really good lawyers in the country, he could have picked somebody else!' And I wish I did!"

....There are lots of really good lawyers in the country, he could have picked somebody else!” And I wish I did!

Trump's and Gowdy's comments followed a story in The New York Times that said Trump had asked Sessions to reverse his recusal in the Russia case.

Trump wanted Sessions to take control of the Russia matter, the Times reported, in order to protect him — he evidently felt he could exercise more control over Sessions than over Deputy Attorney General Rod Rosenstein, who eventually appointed special counsel Robert Mueller.

On Fox News on Tuesday and then on CBS on Wednesday, Gowdy sought to put Trump's views into the context of the president's perspective: Trump told then-FBI Director James Comey, according to Comey's memos, that he hadn't done anything wrong but that if any of his staff members had, he wanted the FBI to find out.

And the FBI was doing just that when it sent a confidential informant to meet with three Trump campaign aides in 2016, Gowdy said.

"I am even more convinced the FBI did what my fellow citizens would want them to do when they got the information they got and that it has nothing to do with Donald Trump," he said.

Gowdy emphasized the goal was to find out about Russia's interference in the election, not to spy on Trump's campaign — the opposite of what Trump has said. Trump repeated his claim that the FBI was spying on him and his campaign on Tuesday night at a rally in Nashville.

Gowdy and House intelligence committee chairman Devin Nunes, R-Calif., received a secret briefing last week about the FBI's use of the confidential human source. Gowdy, Senate Majority Leader Mitch McConnell, R-Ky., and others who have been briefed on the matter say nothing they've learned has shaken their confidence in the FBI or Mueller.

Trump and his supporters have spent months attacking Mueller, the FBI and the Justice Department with a variety of charges, including alleged "abuse of power," "bias" and others, which critics call an attempt to undercut public faith in federal law enforcement ahead of whatever Mueller's office discovers.

Gowdy said in his interviews that Rosenstein and FBI Director Christopher Wray have made clear to him that Trump was never a target of the FBI's investigation. The two leaders are "stunned," he said, whenever people think the president is a target.

That comports with the assurances that Comey has said he gave Trump in confidential conversations during his time as FBI director — although Comey declined to say so publicly. If FBI investigators were to discover wrongdoing by Trump and he did become a target, a prior public announcement would have created a duty for the FBI to correct its past statement, Comey said.

Gowdy pointed out that no one knows whether Mueller is conducting a criminal investigation. What he inherited from the FBI under Comey was a counterintelligence investigation, focused on the work of Russia's spy services and their outreach to Americans.

And the scope of the special counsel's investigation may include whether Trump broke the law in trying to frustrate the Russia investigation — by asking Comey to lay off, by reportedly asking other intelligence bosses how to get Comey off the case, by firing Comey or by leaning on Sessions. Obstruction of justice is a criminal matter.

Gowdy told Fox News that he thought Trump should grant an interview to Mueller and his investigators in order to clear all this up.

"I have always said, 'I think you ought to sit down ... you've told us publicly there was no collusion, there was no obstruction,' " Gowdy said. "Say in private what you've said publicly."

The president and his attorneys are frustrated by the swirling allegations and the case hasn't been helped by Democrats who have tried to use the special counsel investigation as a weapon against Trump, Gowdy complained.

When critics such as House intelligence committee ranking member Adam Schiff, D-Calif., don't say that Trump isn't a target, they're "doing a disservice to all our fellow citizens," Gowdy said.

What about Trump, Gowdy was asked on CBS — why does he keep charging the FBI and Justice Department with spying that didn't happen? The South Carolina congressman responded by distancing himself from Trump.

A spokeswoman later confirmed to NPR the two men had never met, spoken or "communicated."