Accessibility links
Advice For 'Grown-Ups' In Their 40s: 'Just Do What You Want More Often' Author Pamela Druckerman says she's reached a "now-or-never phase of life." Her new book There Are No Grown-Ups is a coming-of-age story — for people whose age is 40. 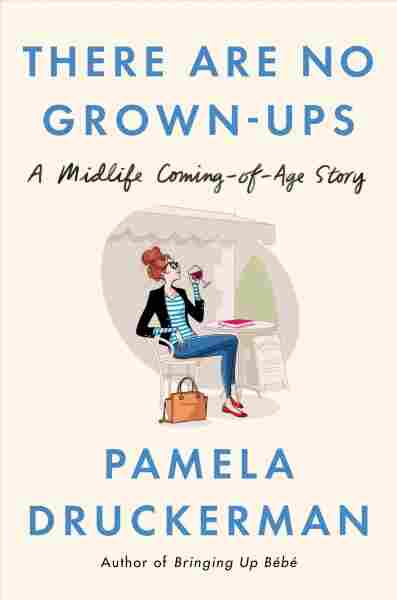 There Are No Grown-Ups

When you watch The Graduate, do you identify with the parents? Do you grow impatient scrolling to your birth year in online drop-down menus? Is a night of continuous, unmedicated sleep one of life's greatest pleasures? If so, Pamela Druckerman says, you might be in your 40s.

Druckerman thought that being in her 40s would be a "delicious secret." But, it turns out, others noticed, too. Salespeople steered her toward anti-aging creams. Her daughter observed: "Mommy, you're not old, but you're definitely not young anymore."

So she decided to write about this "confusing place in the lifespan." Druckerman's new book is called There Are No Grown-Ups: A Mid-Life Coming-of-Age Story.

Druckerman has lived in Paris for the last 14 years. Her 2012 book Bringing Up Bébé observed cultural differences in parenting in the U.S. and France. In her new book, she explores the French approach to aging. (Writing a book about being in your 40s while you are in your 40s is "quite a 'meta' way to age," Druckerman says.)

Being 40, she found, isn't about meeting any big milestone — it's an "accumulation of lots of small experiences." Druckerman took careful notes on her own experience, and shares her observations on a decade Victor Hugo called "the old age of youth."

On being in between

The people who used to cheer us on — our parents, our mentors — who said, "good job ... you're building an adult life." Those people are now kind of preoccupied with their doctors' appointments and getting their knees replaced. And then there's this whole other generation of people below you who you're supposed to be cheering on. Whether they're your kids, or people that are working for you.

On getting better at saying "no"

Another kind of tip that I tell myself is: Prioritize your own projects. ... People are going to call you and they're going to say: Please, can you help me? ... you're the only one who can help me. ... And if you don't prioritize — if you're not a little bit ruthless about your own life — nobody else is going to be.

On following your own instincts

Just do what you want more often. Don't be so worried about what other people expect. ... Nobody's going to be that disappointed that you don't want to have lunch with them. They'll get over it. ... Take as much as you want from the buffet. Go back for seconds. Nobody's going to be offended. ... Just follow your own instincts and things tend to work out better rather than being self-conscious.

Care For A Career Change-Up? These Stories Are Proof It's Never Too Late

On taking stock of your life in your 40s

I think in writing a memoir you kind of give order to your life. And so the process of pulling this information and these memories out of myself helped me give some order to what I experienced.

... Even if you're not writing a book ... [in your 40s] you sort of have enough distance from your life and from your family and from your friends to see patterns and to kind of rise above it a little bit and understand yourself more. I think it was [philosopher Arthur] Schopenhauer who said the first 40 years provide the text and the next 30 provide the commentary. I feel like I had entered, in a way, the commentary phase and that made life a lot more interesting.

8 Ways You Can Survive — And Thrive In — Midlife

On her cancer diagnosis

When I was 41 I had a very bad back pain and it turned out to be Non-Hodgkin's lymphoma. I had three little kids and husband and a book about to come out ... and I was suddenly confronted with ... death. ... I really had to confront a lot of ... very dark possibilities. ... I think a lot of people say after they're ill that they changed their whole life — that they realized what they really wanted. And for me, it was a process of realizing that I love my life. And it kind of deepened everything.

On self-fulfilling prophecies about aging

In America we have the story that ... your sex drive evaporates. ... Nobody wants to sleep with you, but you don't want to sleep with them either. ... And it turns out that that is really much more of a cultural story than a biological story, and ... people's behavior responds to this cultural story. ...

In France there's a slightly different narrative. ... Women in their 50s and 60s in France are much more sexually active than women in America are. So I don't think you can ... snap your fingers and switch cultural narratives. But just knowing that it's not biologically inevitable I think gives you some power over it.

Women [in the U.S.] will say ... "As I got older I stopped caring what anyone thought and I could just do whatever I wanted." [That] always felt a little bit false to me, and a little bit sad — that you would reach the stage where you didn't care about other minds ... and it felt sort of unnatural.

The French have a slightly different version, where you get to know your own mind more ... you're trying to please yourself with the way you dress, and the way you act, and who you are. But you're also engaged with other people — you care how you look, you care how you dress. So it's a more interactive version of aging. ... It's about being free thinking, it's about organizing your life to correspond to who you really are, but it's also a social model — it's about your relationships, too.

Forget About It: Your Middle-Aged Brain Is Not On The Decline

On being "comfortable in your own age"

In America the idea is you try to look as young as you can, for as long as you can. And when that stops working you kind of blame yourself and feel like a failure. And the French have this slightly different ideal, which is to be the best version of the age that you are — to be comfortable in your own age. And that was both more calming and a lot more realistic.

Selena Simmons-Duffin and Becky Sullivan produced and edited this interview for broadcast. Beth Novey adapted it for the Web.