Accessibility links
Steel, Aluminum Tariffs On U.S. Allies EU, Canada And Mexico To Take Effect Friday The tariffs have been threatened for months — and are likely to lead to retaliatory measures. Commerce Secretary Wilbur Ross said the tariffs are based on national security concerns. 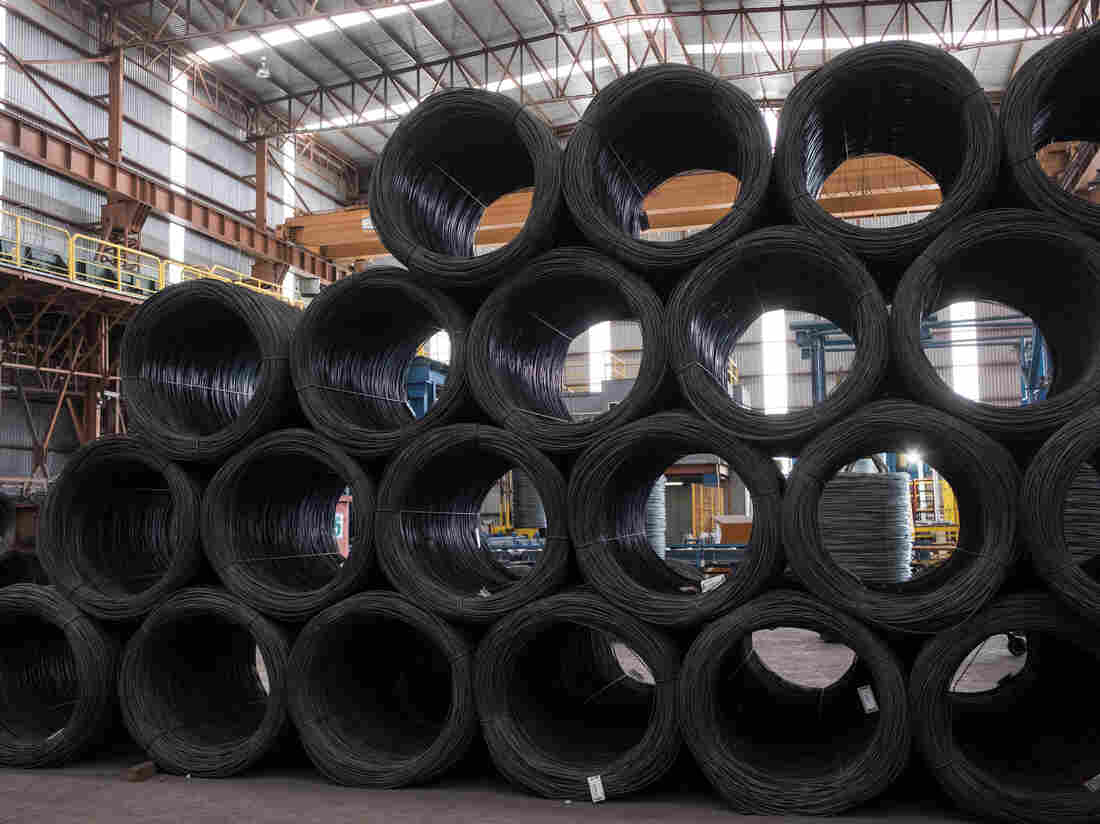 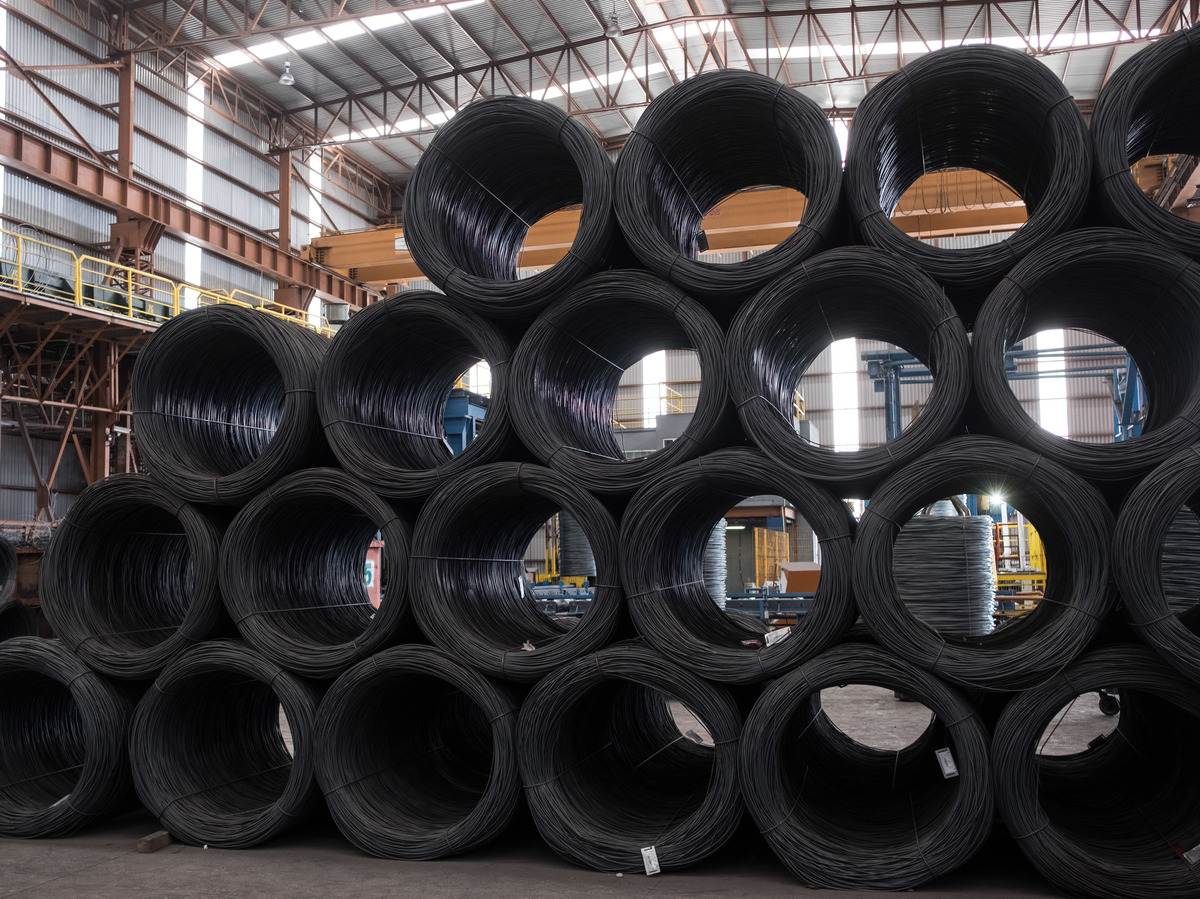 Coils of steel wire sit stacked in the shipping area of the Grupo Acerero SA steel processing facility in San Luis Potosi, Mexico, in March. Mexican steel will be subject to a 25 percent tariff.

The Trump administration made good on threats to impose tariffs on some of the nation's closest allies Thursday, announcing it will no longer exempt Canada, Mexico and the European Union from previously announced levies on steel and aluminum.

The announcement was made in Paris by Commerce Secretary Wilbur Ross.

Canada and Mexico had been exempted from the tariffs announced in March while negotiations over the North American Free Trade Agreement continued. But Ross said those talks were taking longer than "we had hoped." And so the administration decided to lift the exemption from the tariffs for those countries.

He said trade talks with the EU had also been fruitless.

The EU is the nation's No. 1 source of imported steel, and Canada is the top aluminum source.

The tariffs — 25 percent on imports of steel and 10 percent on aluminum — take effect at midnight Friday. They are expected to lead to retaliation from European nations. Likely targets are thought to be U.S. exports of jeans, motorcycles and bourbon.

EU Commission President Jean-Claude Juncker said of the U.S. tariffs, "This is protectionism, pure and simple. We will defend the union's interests, in full compliance with international trade law."

“Today is a bad day for world trade. The EU cannot not react. We will immediately introduce a settlement dispute at WTO and will announce counterbalancing measures in the next hours. Unilateral measures are totally unacceptable." @JunckerEU #EUTrade pic.twitter.com/p3sPMfyzCe

France's minister of the economy and finance, Bruno Le Maire, called the tariffs "unjustified, unjustifiable and dangerous," in an interview on NPR's All Things Considered.

"We cannot negotiate, we cannot enter into any kind of discussion, under pressure," Le Maire said. "And being hit by tariffs will not help us to open the door to any kind of negotiation."

In a statement, Mexico's Economic Ministry said it was imposing tariffs on steel imports, lamps and pork products as well as various produce and cheeses. The tariffs will remain in effect, the ministry said, until the U.S. government eliminates the imposed taxes.

Canada will impose tariffs against imports of steel, aluminum, and other products from the US – we are imposing dollar for dollar tariffs for every dollar levied against Canadians by the US.

House Speaker Paul Ryan, R-Wis., said in a statement that he "disagreed" with the decision and that he plans to keep working with the president to find better options "to help American workers and consumers."

"Today's action targets America's allies when we should be working with them to address the unfair trading practices of countries like China," Ryan also said.

Sen. Ben Sasse, R-Neb., said, "This is dumb. Europe, Canada, and Mexico are not China, and you don't treat allies the same way you treat opponents. We've been down this road before — blanket protectionism is a big part of why America had a Great Depression. 'Make America Great Again' shouldn't mean 'Make America 1929 Again.' "

Bad news that @POTUS has decided to impose taxes on American consumers buying steel and aluminum from our closest allies--Canada, the EU, and Mexico (with whom we run a trade surplus on steel). In addition to higher prices, these tariffs invite retaliation.

In a call with reporters, Ross said the tariffs are based on national security concerns, which he said was an all-encompassing category.

"We take the view that without a strong economy, you can't have strong national security," he said. "The president's overwhelming objective is to reduce our trade deficit."

The administration's biggest concern is steel exports from China, which are already subject to tariffs, but the White House says overcapacity in other nations must similarly be addressed. Ross said there "is no silver bullet solution" of simply imposing tariffs or quotas on China itself.

The U.S has reached agreement with South Korea, Australia, Brazil and Argentina, which are voluntarily limiting their metals exports.