Accessibility links
'Heavenly Bodies' Is Gorgeous — But Full Of Strange Silences The companion piece to this year's Met Gala, Heavenly Bodies functions beautifully as an art object — but it has some odd blank spots, particularly around the contributions of women to Catholicism.

'Heavenly Bodies' Is Gorgeous — But Full Of Strange Silences

'Heavenly Bodies' Is Gorgeous — But Full Of Strange Silences 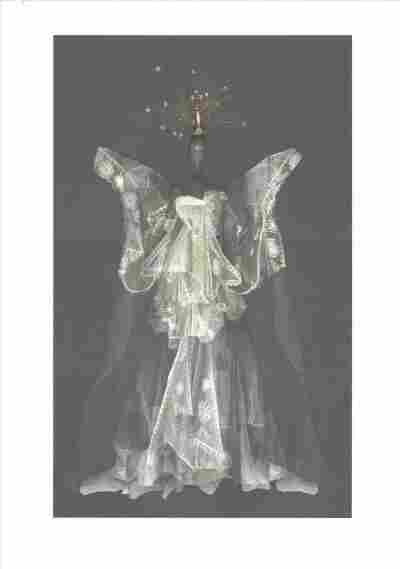 Fashion and the Catholic Imagination

Over the last decade or so, the Costume Institute has become the socialite daughter of the Metropolitan Museum of Art. Its yearly fundraiser — timed to a new costume exhibition — has gone from a fashion industry who's-who to a red carpet livestreamed on E!, and the exhibitions themselves are blockbuster events. Recent years ranged from abstract exercises ("Manus X Machina," about fashion and technology) to fraught cultural ground ("China Through the Looking Glass," which hit many of the hurdles you might expect).

This year's exhibit, "Heavenly Bodies: Fashion and the Catholic Imagination," is a gorgeous and frustrating middle ground. Catholicism has a long history of reinforcing its own iconography, creating a visual dictionary recognized the world over. (Chances are you've never asked a costume-party priest or nun who they are.) That means the exhibit itself is more than just designer pieces beside the religious vestments that inspired them — it's a cultural history of enormous complexity that begs examination beyond the allure of a beautiful garment. Given the Vatican's involvement (it lent out 40 rare vestments), there's some inevitable tension. That seems perfectly embodied in the painstaking companion volume.

A book like this operates on two levels: As an art object, and as a thesis statement. As an object, Heavenly Bodies is handsome, and despite some distracting collage treatment on the photographs, elevates itself beyond an exhibition catalog, though the Vatican collection alone would be worth cataloging — so staggeringly ornate that many modern takes necessarily pale in comparison. (Essayist Marzia Cataldi Gallo mentions Benedict XVI's belief that "beauty is not a decoration applied to the liturgy but its constituent element.") The book benefits from essays like David Morgan's "Vestments and Hierarchy in Catholic Visual Piety," in which the "costume culture of the Vatican outlived the robes and wigs and paraphernalia of heads of state, thrusting it into a symbolic space all its own." There are also smart notes on the physical spaces the clothes occupy in the museum, or historical artworks that are echoed in some of the clothes. And the modern garments reflect Catholicism's influence on fashion from the sequined to the sleek.

The chosen designs make for a beautiful, if slightly tidy, interpretation of Catholic tradition.

The chosen designs make for a beautiful, if slightly tidy, interpretation of Catholic tradition, which has influenced an impressive range of designers from Lanvin to Lacroix, and a few designers who appear often enough to feel like their own conversation between fashion and religion. A devout Balenciaga designed clerical vestments alongside Catholic-inspired womenswear; Alexander McQueen was more interested in the tension between the holy and the carnal, with silkscreened religious icons folded and stretched uneasily across the body.

But much also seems left unsaid. Among other things, Catholic imagery carries a known erotic charge; long before Madonna and Lady Gaga, there was Saint Sebastian transfixed by arrows, or the Ecstasy of Saint Theresa. Many garments here are alluring interpretations, but most discussion of sensual subtext — or any significance to the many women's garments adapted from exclusively-male vestments — is absent. (It brings to mind Morgan's discussion of the Virgin Mary, whose garments help remove the body from the icon: "We do not contemplate Mary's body per se," he promises, "but rather her tunic, cape, and mantle.") And despite a presence in the Met's Byzantine rooms reflecting the early days of Christianity, the commentary is largely a Roman Catholic affair. 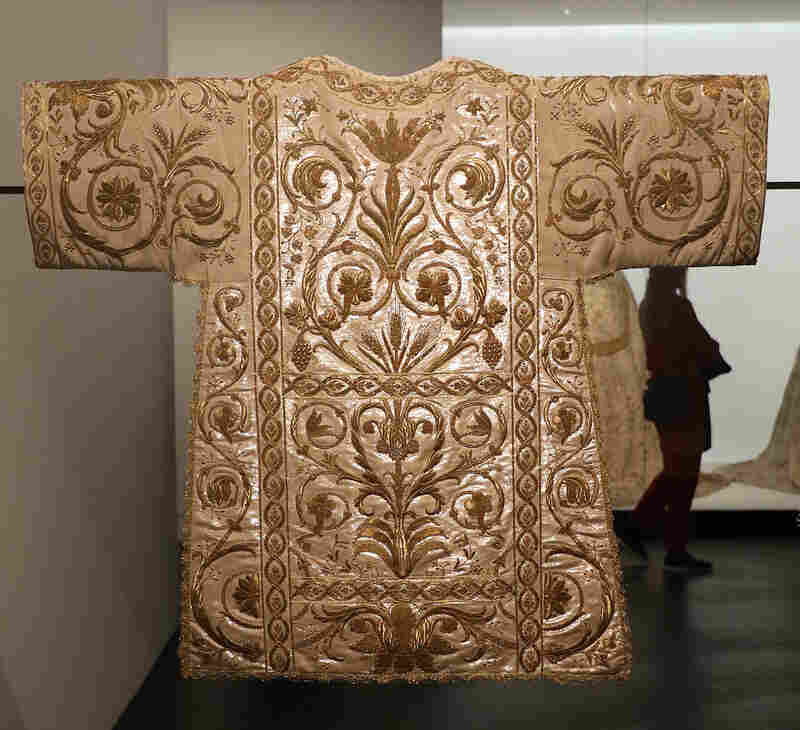 One of the intricately embroidered garments on display for "Heavenly Bodies: Fashion & the Catholic Imagination" at the Metropolitan Museum of Art. Taylor Hill/FilmMagic hide caption 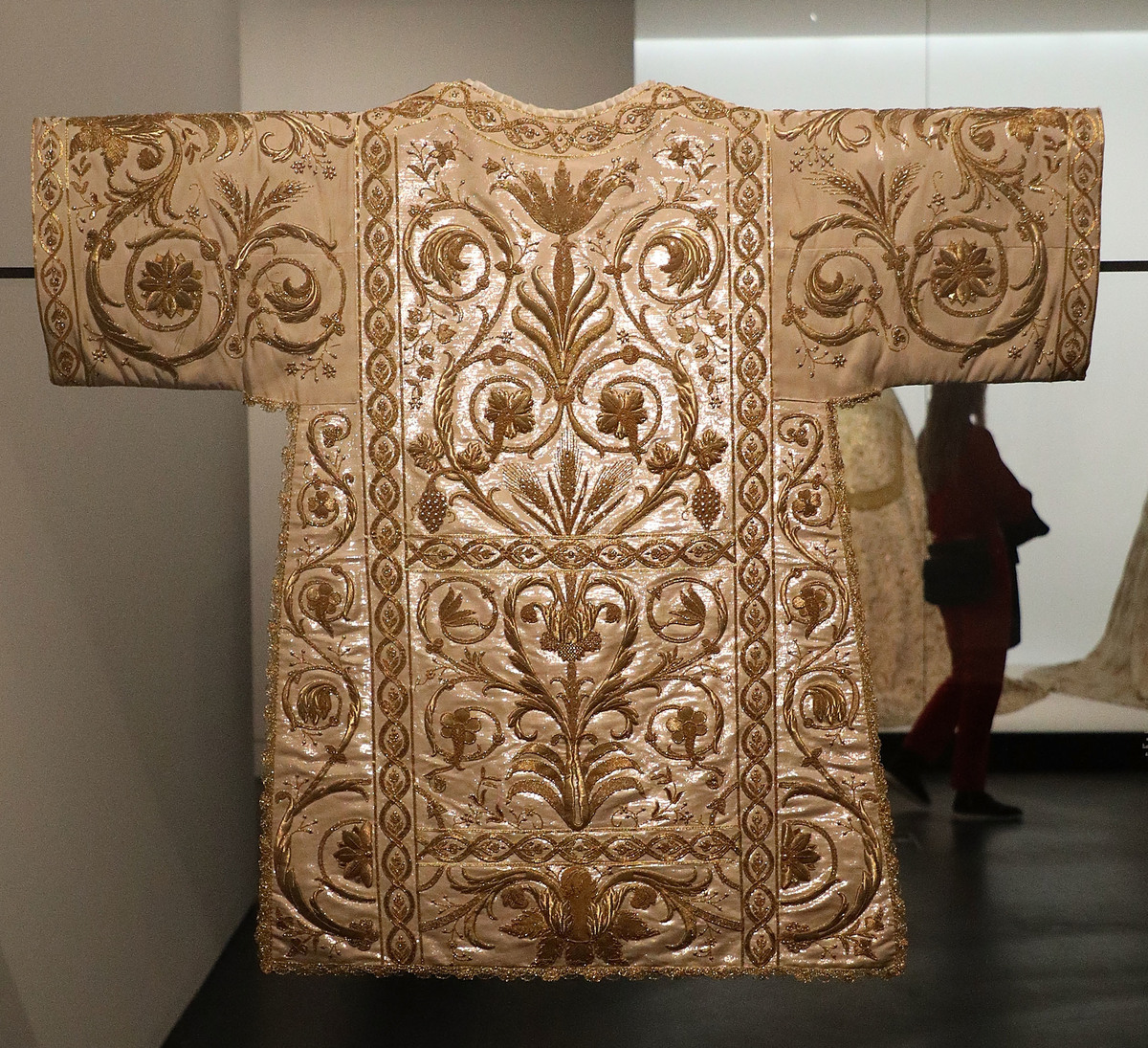 One of the intricately embroidered garments on display for "Heavenly Bodies: Fashion & the Catholic Imagination" at the Metropolitan Museum of Art.

Of course, at heart this is an exhibition catalog, not narrative nonfiction — its primary job is to present things for examination, curated to suggest relationships and prompt the viewer to want to learn more. (If you're curious about why a Vatican cope features an eagle, a bull, and a lion, enjoy researching Babylonian iconography and tetramorphs!) But given that Heavenly Bodies has expanded the scope of curation with so many essays, some empty spaces that might go unnoticed in an exhibit start to feel pointed on the page. In particular, notes on vestments for Pius XI, made by the Poor Clares, and Ricardo Tisci's vestments for Our Lady of Graces, designed by Sisters of the Poor Benedictine Cassinesi of Lecce prompt the question: Since nuns traditionally made many of these vestments, and are enough of a fixture to inspire an entire section of the exhibit, why is their work — or their presence in the Church — not seriously discussed?)

Heavenly Bodies is without doubt a gorgeous collection of garments, full of elegant (or playful, or powerful) reminders of the ubiquity of the Catholic imagination in our public memory. And there are always questions that a museum exhibit naturally hopes to generate, about context, history, and relationships. The Catholic Church, as a rule, doesn't encourage quite the same level of scrutiny about itself. At heart, that means that despite clothes built on centuries of subtext about religious and state power, sexual and social weight, and enduring iconography quite literally vested in these artifacts, context is often absent. The result is beautiful, with some heavy silences.