Accessibility links
Asian-American Voters Could Become A Force In Historically Red Orange County Once a rock-ribbed Republican stronghold, Orange County, Calif. went blue in the last presidential election for the first time since 1936. Asian-Americans are the fastest growing demographic there. 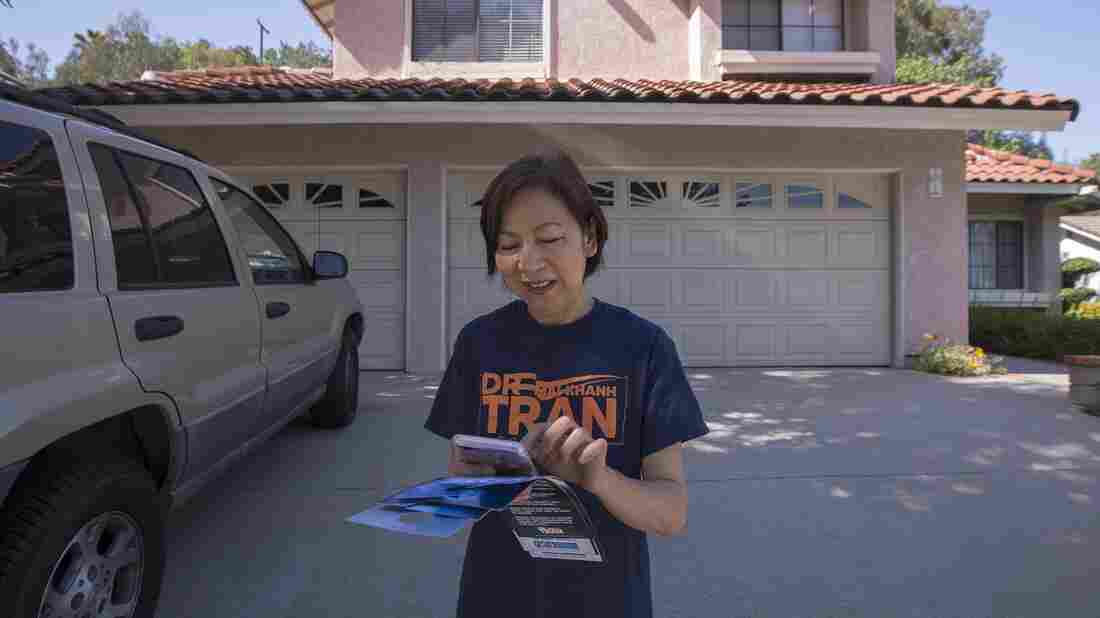 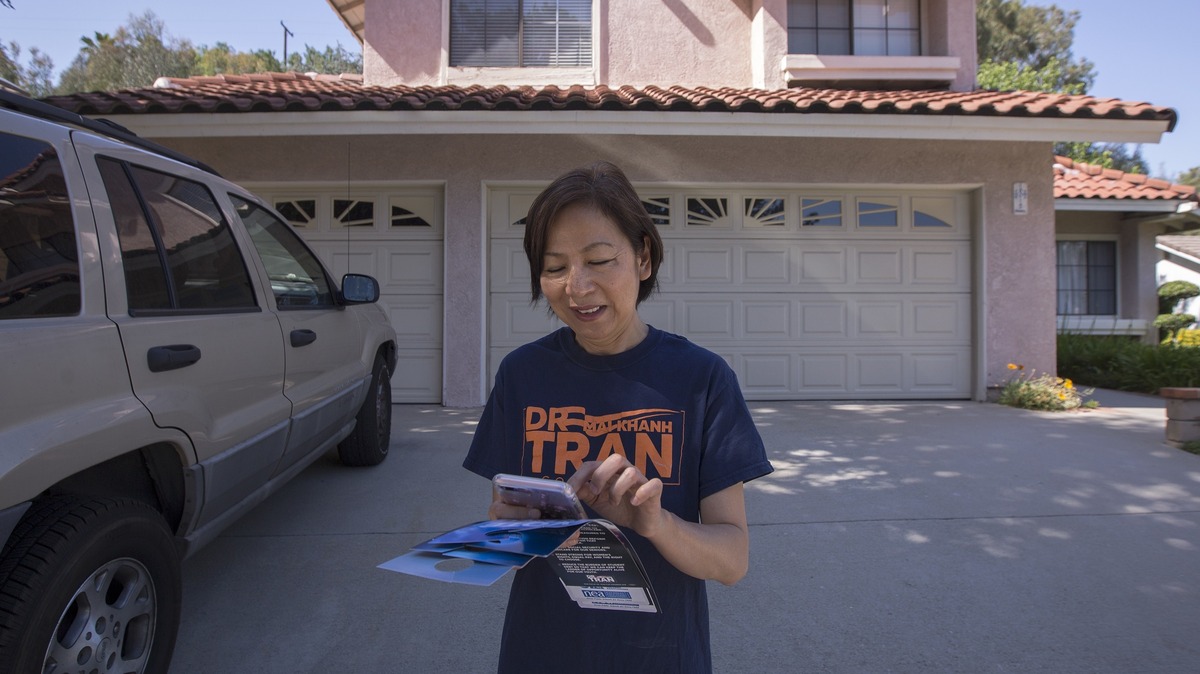 As California joins seven other states in holding its primary Tuesday, one spotlight is on a handful of congressional seats in suburban Orange County, where Democrats think they can take back control of the House. That's in part due to the region's fast-changing demographics.

Once a rock-ribbed Republican stronghold, Orange County went blue in the last presidential election for the first time since 1936. Pundits credited a get-out-the-vote effort among the county's left-leaning Latino population. But this go around eyes are on Asian-Americans, the county's fastest growing minority.

Historically, Asians haven't been as politically active in the county. And among those who were, Republicans have had a sizable edge when it comes to voter registration.

Midterm Messages: Women Are Owning 2018, But So Is Trump

But there are signs all of this may be changing. The looming question a lot of people don't yet have an answer to is who will win their support.

"In the past, because of our background, we tended to be more conservative," said Frank Chen, an engineer in Irvine. "We handled problems mostly internally, we don't like to express our disapproval."

But Chen was eager to talk politics and the California primary one afternoon while snacking on soup dumplings at a café in Irvine's hip and modern Diamond Jamboree shopping center. It's a favorite lunch spot for young Asian professionals.

Chen says the younger generation is becoming much more politically active than their parents and grandparents before them. He's planning on voting Democratic in Tuesday's primary, largely because he says he doesn't like the direction the country is going under President Trump.

"Asians are realizing, 'hey,' you can't just be silent," Chen says. "If you have a problem with something, you should talk about it, bring it up so people will know where you stand."

There was one, dramatic moment this past Spring that made it clear that Asian-Americans were becoming a political force in Orange County. Busloads of Chinese Americans from Irvine arrived at a Board of Supervisors meeting to protest plans to build a temporary homeless shelter near schools and a park. The groups organized their opposition quickly thanks to social media apps like WeChat, a favorite in the Chinese community. They held protest signs as hundreds chanted loudly "No tent city!" The county scrapped the plan.

"My theory has been that the demographics shifted so rapidly that Orange County was not ready for it," says Sylvia Kim, director of the Orange County chapter of Asian Americans Advancing Justice, a civil rights group.

According to Census figures, the Asian-American population in Orange County has more than doubled since 1990: now accounting for one of every five residents. The county now has the third largest population of Asian-Americans in the country, behind only the Los Angeles and San Francisco regions.

"As the fastest growing racial group in the U.S., Asian-Americans as a whole, we have not yet reached our political potential," Kim says.

She thinks this is especially the case in suburban Orange County, where she says the large Cambodian, Vietnamese, Korean and Asian Pacific Islander communities tend to live in more closed off ethnic enclaves. The county is also huge and spread out with no one, large city as a center hub. In many neighborhoods, very little English is spoken which can make get-out-the-vote efforts a challenge.

"If you think about the Latino community, I always say to service providers, you just need to speak one language," Kim says. "When you're reaching out to the Asian community you need to speak six languages."

Kim got a group of Asian-American civil leaders together recently for a forum in Santa Ana to strategize on how to mobilize more voters to the polls, or fill out their mail-in ballots, ahead of the primary. They snacked on banh mi sandwiches and egg rolls, and it was one of the first times in recent memory that some of the groups servicing the various communities had shared a stage.

Panelists like Tricia Nguyen, representing the Vietnamese community, said one barrier is that some immigrants have come from more corrupt countries and have historically not been motivated to vote because they don't think their voice matters.

"At the end of the day if you want to change, especially the midterm elections, than we have to get more people to vote and vote the right way," Nguyen said.

The forum's audience was mostly progressives. Nguyen and others concluded they aren't sure whether O.C.'s Asian-American voters are organized enough yet to be a key swing vote this year, but that they will be by 2020.

A recent report by Asian Americans Advancing Justice showed that among the county's registered Asian-American voters, 35 percent are Republican, 27 percent are Democrat, though a large number – 34 percent - are unaffiliated.

In the heavily Korean suburb of Garden Grove, the president of the Korean American Federation of Orange County, John Kim, told NPR he doesn't expect those statistics to change much, even as the county has gotten more diverse.

Political historians say some of the county's earlier Korean and Vietnamese immigrants were traditionally aligned with Republicans, due in part to the GOP's historically strong anti-communist stances.

"We do support the Republican party more than Democrats," Kim said.

The shopping center that Kim's office sits in is lined with more traditional Korean barbecue restaurants, karaoke bars and large Asian supermarkets. Most of the clientele is older, not a lot of English is spoken.

For Kim, the big issue for Korean-American voters right now is the negotiations over the Korean Peninsula, a big reason he says why many here support Donald Trump.

"We support him because we believe him, what he is saying now," Kim says.

Kim just wishes the president wouldn't be so hard on immigration. That appears to be at least one widely shared view among Orange County's diverse – and still up-and-coming – Asian voting block.

Because of incorrect information provided by Getty Images, a previous caption in this story said Rowland Heights is in Orange County. It is in Los Angeles County and borders Orange County.