Accessibility links
Democrats Hope To Avoid Knocking Party Candidates Out Of Contention In California Democrats had great success in convincing new candidates to run in the state, but the rush of excitement created crowded races with some contenders campaigning aggressively against one another. 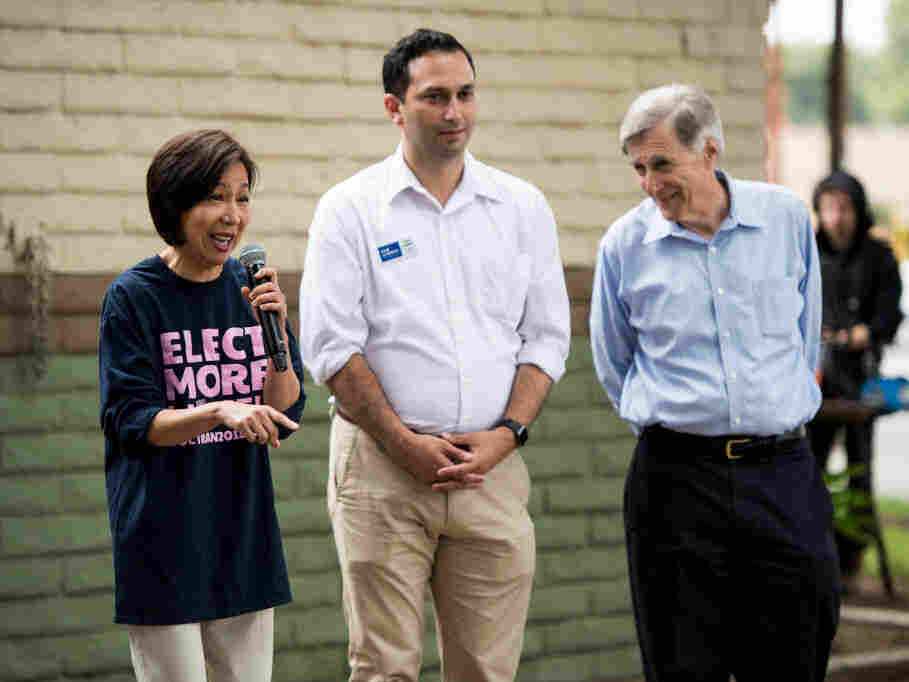 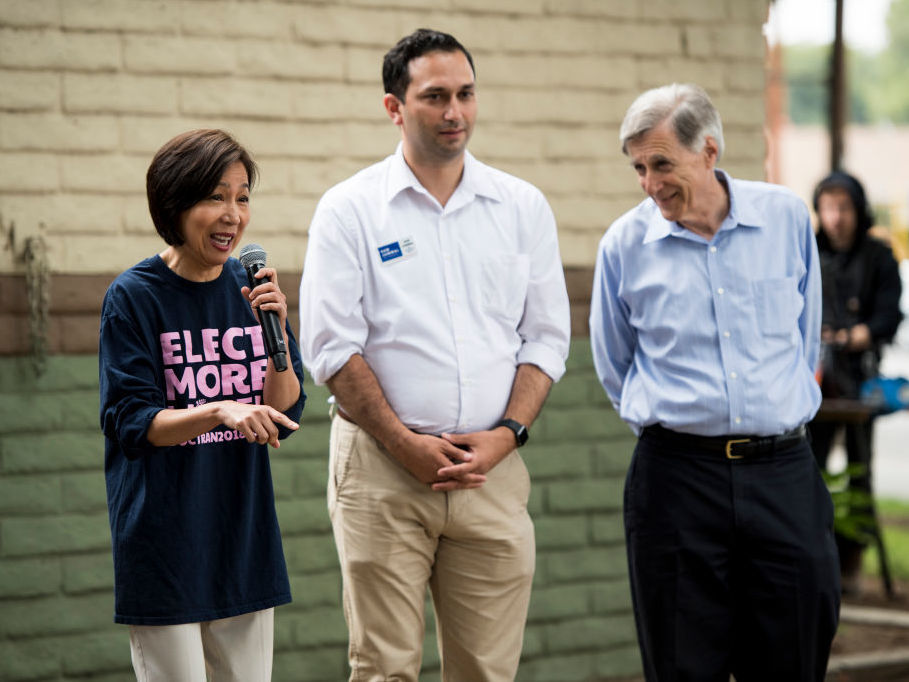 Democrats running for the California 39th Congressional district, from left, Mai Khanh Tran, Sam Jammal and Andy Thorburn, speak to voters during a rally held by Swing Left at Carolyn Rosa Park in Rowland Heights, Calif., on May 19.

House Democrats believe they can win more Republican-controlled congressional seats in California this year than any other state in the country.

But, first, they need to prevent their own candidates from ruining their plans.

The June 5 primary has taken on near-mythic importance for Democrats aiming to regaining control of the House in November. They hope that high disapproval ratings for the Republican-led Congress and President Trump will create a rush of enthusiasm for Democrats in areas where GOP control is already tenuous.

There is no doubt that there's real enthusiasm in California this year, particularly in the suburbs around Los Angeles. It is nearly impossible to find a corner on a busy street in many of these towns that isn't packed with a jumble of candidate signs and posters.

But the problem for the party is that most of the signs are for Dems running against each other.

Democrats had great success in convincing new, energetic candidates to step up and run — almost too much in some cases. The rush of excitement created crowded races with three or more Democrats campaigning, sometimes aggressively, against one another.

This poses a serious risk in a California where the top two primary-vote winners wind up on the ballot in November, regardless of their party.

Engaged voters in California are hyper-aware of those risks, but most say they're not willing to back down and away from their candidate of choice.

Crowded fields pitting Democrats against each other

The infighting got so bad in past few weeks that the chair of the California Democratic Party had to broker a truce between two Democrats in the 39th district, which includes towns like Brea and Fullerton. That race is one of many where there are so many Democrats running in the primary that party leaders fear voters will be hopelessly split — meaning no Democrat will get enough votes to make it to the general election.

This district was supposed to be a dream for Democrats. The current congressman, Republican Rep. Ed Royce, is retiring. That should have evened the playing field for Democrats to pick up the seat without having to run against a representative that voters already know.

At one point there were nearly 10 Democrats running in the district. Now they're down to nine candidates all together, with some internal polls showing not a single one with more than 20 percent of the vote.

Andy Thorburn is a progressive running in the district — and he is widely considered to be trailing establishment-backed candidate Gil Cisneros. The two spent most of May trading barbs and attacks in ads and public forums, but by Memorial Day, Thorburn was downplaying their differences. At least on policy.

"Let's not overstate the differences, there are way more differences between Republicans and Democrats, obviously," Thorburn said at a campaign event in Fullerton. "There are differences of emphasis, nuance. They're not earth-shaking differences."

Republicans are quick to point out that the leadership at the Democratic Congressional Campaign Committee decided to intervene in several races to put a thumb on the scale for some candidates. And so far, nearly every DCCC backed candidate has been a relatively moderate, mainstream Democrat.

That has been a turn-off for some deeply engaged progressives who say the party is violating their own message — the message that they want their candidates to match their districts. The emphasis on finding the right candidates is so strong in California that the DCCC opened a rare West Coast branch last year just to help manage these races.

Campaign officials say privately that they're closely watching what undecided voters and disaffected Republicans want — and that they're using that information as a guide for who they pick.

Washington Rep. Denny Heck, who heads recruiting at the DCCC, said that in the end, the goal of any campaign is to win.

"Democrats have greater risks this year because we're the ones that have the long list of candidates," Heck said. "On occasion, in these top two primary states we're confronted with really complicated, almost Gordian-knot-type problems with a plethora of candidates — and a real prospect that we'll get shut out and two Republicans advance. That's a particular problem for us this year because all of the energy is on the Democratic side."

The problem in the 39th district, and others around it, is that the candidate squabbling is driving the most engaged voters further apart. Most say they expect the party to unite when the primary is done, but that's cold comfort if none of the Democrats make it past the primary.

Democrats firing at each other

The infighting is just as bad in areas where Democrats have an almost absolute chance of advancing to the general election, like in the 25th district north of Los Angeles. National Democrats say they aren't intervening in this race to oust Republican Steve Knight. But the two candidates are sparring nonetheless.

Progressive Bryan Caforio and his more moderate competitor, Katie Hill, have clear policy differences on a range of issues, like gun control, health care and immigration. But they have also been locked in a fight for weeks over a series of negative ads and mailers attacking a non-profit organization that Hill once ran.

The fight bled into a candidate forum and into interviews in recent weeks. The issue has become so prominent that Hill talked about it with canvassers last weekend. Her campaign prepared language for how to address the negative ads when they go door to door.

The fight is attracting a lot of attention at a time when Knight could otherwise be vulnerable on the hot-button issue of immigration. Knight is one of nearly two dozen Republicans who have signed on to a petition to force votes on immigration bills, including a pathway to citizenship that many conservatives are against.

That petition could be completed next week, which would thrust Knight into the center of a political fight that is causing a chasm-sized rift within the Republican Party.

But for the most part, Knight is not facing questions about that back home.