Accessibility links
To Raise Awareness For Climate Change, 50-Year-Old Makes Bid To Swim Across Pacific Ben Lecomte is the first person to try to swim across the Pacific Ocean. NPR's Lulu Garcia-Navarro talks to him from Choshi, Japan, before he departs to attempt the 5,500-mile journey. 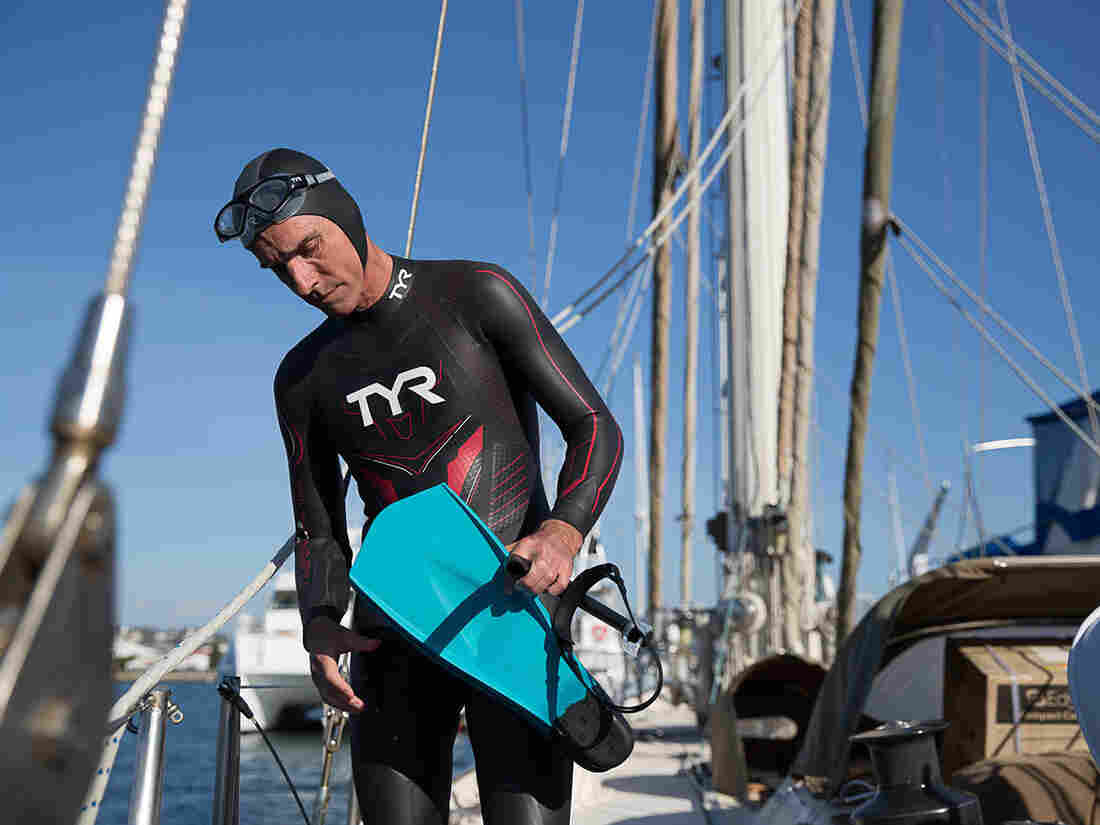 Ben Lecomte hopes to become the first person to swim across the Pacific Ocean. He leaves on Tuesday from the coast of Japan for a six-month journey. Seeker.com hide caption 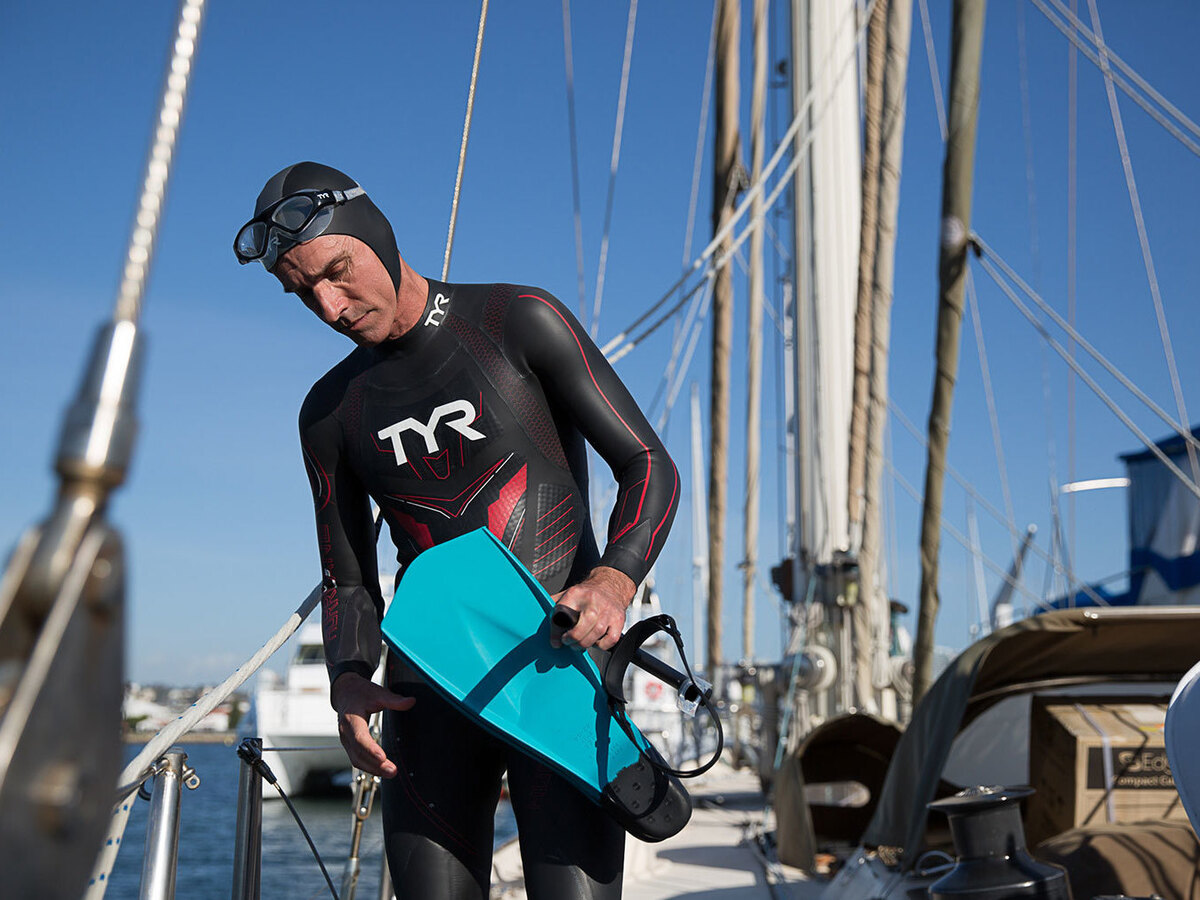 Ben Lecomte hopes to become the first person to swim across the Pacific Ocean. He leaves on Tuesday from the coast of Japan for a six-month journey.

On Tuesday, 50-year-old swimmer Ben Lecomte will push off from a beach in Choshi, Japan, wearing a shark repellent bracelet and an armband to track radiation in the ocean. He hopes to reach San Francisco in six months as the first person to swim across the Pacific Ocean.

A successful 5,500-mile journey will be a feat of athleticism and a major scientific opportunity. Lecomte, a Frenchman now living in Texas, is traveling alongside a boat with a six-person crew. He'll swim eight hours per day on a route that includes the Great Pacific Garbage Patch and the White Shark Migration Area.

Scientific partners, including NASA and Woods Hole Oceanographic Institution, have provided equipment for the swimmer's crew to conduct research on his body and the ocean along the way. They'll gather over 1,000 water samples, in part to gather data on pollution and plant life.

Lecomte has been planning the journey since he swam across the Atlantic Ocean 20 years ago. This time, he'll pick up each morning exactly where he left the night before, in hopes that this swim will become an official record. Seeker.com and Discovery have teamed up to track the journey, which Lecomte is doing in part to raise awareness for climate change.

"The ocean is in peril," he says. "I think it's my duty to use my passion to make a little change."

Weekend Edition's Lulu Garcia-Navarro spoke with Lecomte as he prepares for his swim.

On starting the swim

The real training will start when I jump in the water. Because it's not something you can really replicate, you know — swimming eight hours a day, sleeping on the boat and having limited contact with the outside — it's very particular. As Lecomte swims, a crew of six will take water samples and track data about his body as it moves through the water. The Longest Swim hide caption As Lecomte swims, a crew of six will take water samples and track data about his body as it moves through the water.

On what scares Lecomte about the trip

The sharks are there, I mean, that's their environment. But for me, the biggest concern, I think — it's mostly the cold water. Because you can do so much in cold water after so many hours in the water, and no matter how thick your wetsuit is, you get cold, and it's very, very uncomfortable. 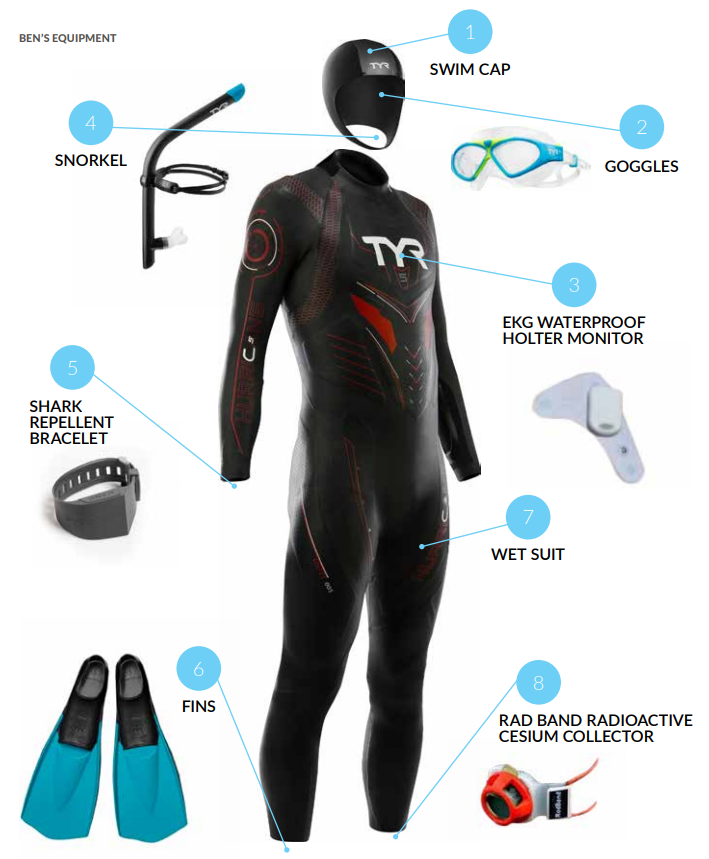 Along with his wetsuit, Lecomte will wear a shark repellent bracelet, a heart monitor and an armband that collects data about contaminants from Japan's Fukushima power plant explosion in 2011. The Longest Swim hide caption

After his swim across the Atlantic, Lecomte said "never again"

It didn't take that long for me to change my mind. Three, four months afterwards I was already thinking about my next adventure and doing something kind of the same.

I had the idea of the swim in the Pacific early on, but I got married and had children so I put that on the side. That was my priority, and now I come back to that dream that I had. I don't want to live with any regrets, so it's something that I've pursued, and I'm determined to do it.

On his children, who will join the last leg of Lecomte's journey

They are very enthusiastic. They are with me right now, they were on the boat last night with me and they are going to be on the boat tonight, and love it. We swim very often together, so we share the same passion.

On why he's swimming across the Pacific

The ocean is in peril. I'm very sensitive to my kids and knowing what they are going to have in their lives. I think it's my duty to try to use my passion to make a little change. We have to find what our role is if we want to preserve what we have. And that's very important for me — and for me to do that for my children.