Accessibility links
Supreme Court Decides In Favor Of Baker Over Same-Sex Couple In Cake-Shop Case The Supreme Court on Monday ruled that a local baker in Colorado was within his rights to refuse to bake a cake for a same-sex couple's wedding, but it did not go beyond this case. 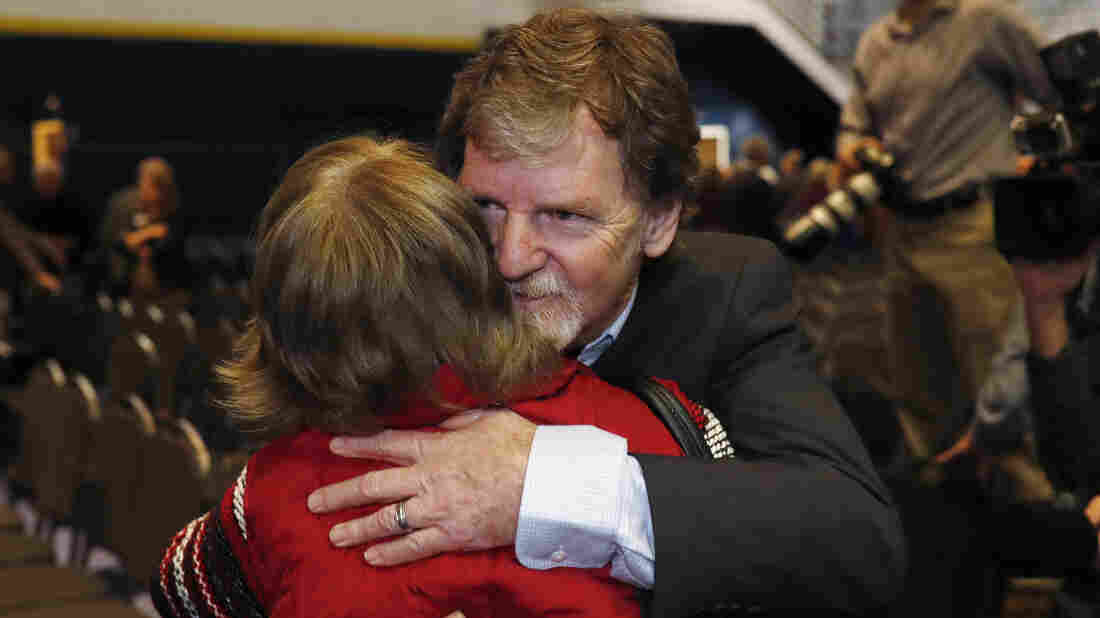 Jack Phillips, owner of Masterpiece Cake, is hugged by a supporter after a rally on the campus of a Christian college in November. David Zalubowski/AP hide caption 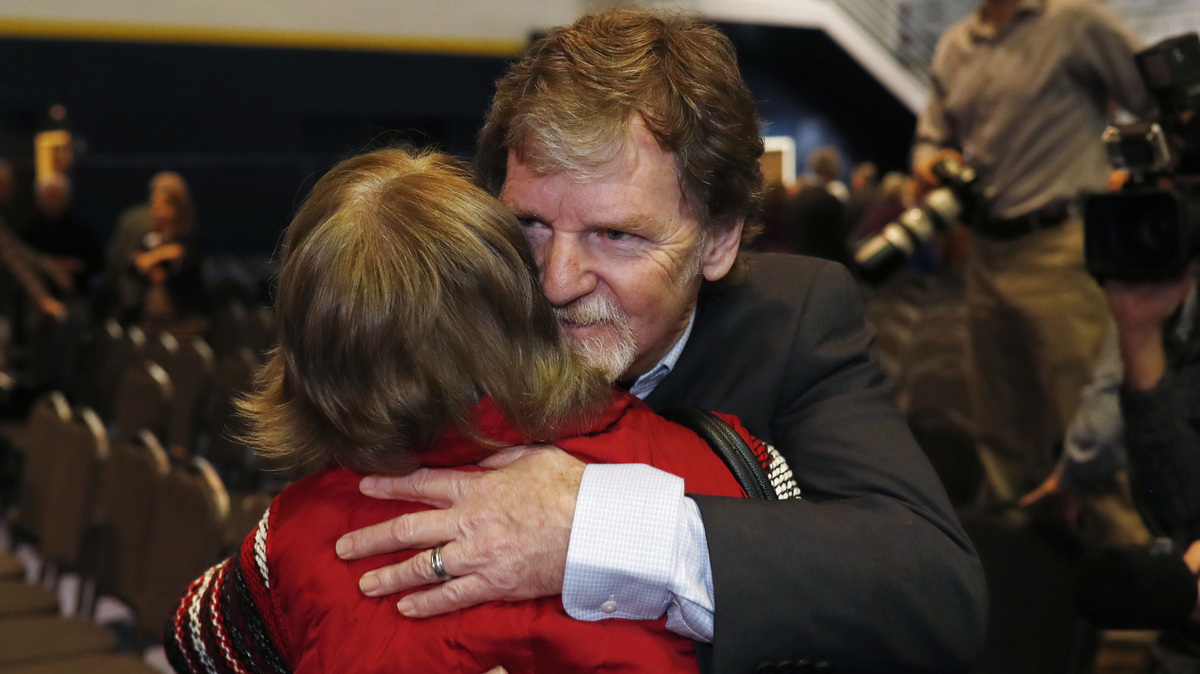 Jack Phillips, owner of Masterpiece Cake, is hugged by a supporter after a rally on the campus of a Christian college in November.

2 Big Decisions From The Supreme Court

The U.S. Supreme Court ruled Monday in favor of a Colorado baker who refused to make a wedding cake for a same-sex couple. But the 7-to-2 decision was on the narrowest of grounds and left unresolved whether business owners have a free speech right to refuse to sell goods and services to same-sex couples.

The case began when a same-sex couple in Colorado — Charlie Craig and Dave Mullins — filed a complaint with the state civil-rights commission after baker Jack Phillips told them that he did not design custom cakes for gay couples. Colorado, like most states, has a state anti-discrimination law for businesses that are open to the public. Twenty-one states, including Colorado, have laws that bar discrimination based on sexual orientation, in addition to barring discrimination based on race, religion and gender.

Acting on the complaint filed by Craig and Mullins, the Colorado Civil Rights Commission ruled in favor of the couple, as did the state Supreme Court. Phillips appealed to the U.S. Supreme Court. As he put it last December, "It is hard for me to believe the government is forcing me to choose between providing for my family ... and violating my relationship with God."

The case seemed to set up a direct clash between Phillips' religious and free speech rights, and the enforcement of Colorado's law. But Justice Anthony Kennedy, writing for the court majority on Monday, threaded the needle far more narrowly. Kennedy said it is "unexceptional" that Colorado law "can protect gay persons in acquiring products and services on the same terms and conditions that are offered to other members of the public," but at the same time, "the law must be applied in a manner that is neutral toward religion."

In this case, Kennedy concluded, the Colorado Civil Rights Commission's consideration of Phillips' case was "compromised" by the comments of one of seven commissioners at a public hearing — comments that Kennedy said disparaged Phillips' faith as "despicable" and comparable to comments made by those who sought to justify slavery on religious grounds. Moreover, the state law at the time afforded storekeepers some latitude to decline creating specific messages they considered offensive, and the Colorado commission had previously allowed three different bakers to refuse to put an anti-gay message on a cake.

Even though the court majority sided with Phillips, Monday's decision was not a roaring defense of business owners' right to discriminate in the name of religion. As Washington University law professor Elizabeth Sepper put it, "The decision from the court is a punt, but it could have been dynamite instead of a dud."

Yale law professor William Eskridge described the decision as "a draw which goes slightly in favor of religious freedom."

Throughout the opinion, Kennedy seemed to be balancing the ledger, trying not to disturb public accommodation laws like the one in Colorado and reiterating that gay people may "not be treated as outcasts." While a member of the clergy clearly cannot be forced to conduct a wedding ceremony for a same-sex couple, in violation of his religious views, Kennedy said, Colorado "can protect gay persons, just as it can protect other classes of individuals."

Lessons for the future, such as for the travel ban case

In his opinion, Kennedy went out of his way to say that decisions on specific cases in the future may well be different. He closed by saying that "the outcome of cases like this in other circumstances must await further elaboration in the courts, all in the context of recognizing that these disputes must be resolved with tolerance, without undue disrespect to sincere religious beliefs, and without subjecting gay persons to indignities when they seek goods and services in an open market."

Professor Thomas Berg of St. Thomas Law School in Minnesota saw Monday's decision as "a toe in the water" for the Supreme Court. "This is the court's first tangle with the issue," he said, and "they clearly wanted to proceed slowly."

As UCLA law professor Eugene Volokh observes, there is much that today's decision doesn't tell us about "what happens with bakers, florists, photographers, videographers, calligraphers" and other businesses, "where the government says, look, we don't much care about your religiosity. We just think you have to provide these services for same-sex weddings."

Elliott Mincberg, senior counsel for People for the American Way, said the decision sends a potent message to state and local governments for the future and "will put a high premium" on those bodies "being careful how they talk about religious objections."

Notwithstanding the assessment across the academic ideological spectrum, conservative groups trumpeted their victory Monday. David Cortman, senior counsel for the Alliance Defending Freedom, called the case "a significant win for religious freedom."

If so, what is down the road in the travel ban case currently before the Supreme Court, in which a great deal of hostility to Muslims was expressed by President Trump, both before and after he was elected?

After Monday's decision, Yale law professor Robert Post said he was "looking forward to the question of whether the court applies the same sort of reasoning to the Muslim ban case, that is to say, whether statements which are discriminatory in their purpose infect the whole record of decision-making."

Despite the lopsided 7-2 vote in Monday's ruling, the court appeared deeply fractured. Seven justices agreed that Phillips was entitled to a fair hearing from the Colorado commission and that the hearing he had received — in which one commissioner compared Phillips' invocation of his beliefs to defenses of slavery and the Holocaust — didn't meet that standard.

Despite this consensus, there were four separate opinions filed for the majority. While Kennedy's opinion spoke for the court, there were three concurring opinions elaborating on agreements and disagreements with Kennedy's reasoning.

Liberal justices Elena Kagan and Stephen Breyer wrote separately to say that bakers may refuse to make a cake with a message they find offensive, so long as they would refuse the same message to any customer.

Conservative Justices Neil Gorsuch and Samuel Alito disagreed with Kagan and Breyer. They argued that as the Colorado commission had previously allowed bakers to refuse to decorate cakes with anti-gay designs, the commission's decision to rule against Phillips was inherently inconsistent and discriminated against some religious groups.

Justice Clarence Thomas' opinion, joined by Gorsuch, was the only one that addressed Phillips' free speech claim, arguing that cake decorating is expressive and protected from government restriction under the First Amendment.

Justices Ruth Bader Ginsburg and Sonia Sotomayor dissented, contending that principles of anti-discrimination required ruling against Phillips. The offensive remarks of a single commission member, they said, did not taint the proceedings, which were reviewed by two courts afterward.

"Whatever one may think of the statements in historical context," Ginsburg said, "I see no reason why the comments of one or two commissioners should be taken to overcome Phillips' refusal to sell a wedding cake to Craig and Mullins."