Accessibility links
Bill Clinton And James Patterson's Thriller Stars A President Facing Impeachment The President Is Missing follows a commander in chief trying to thwart a cyberattack — and not lose his job. Clinton co-wrote the book with best-selling author James Patterson. 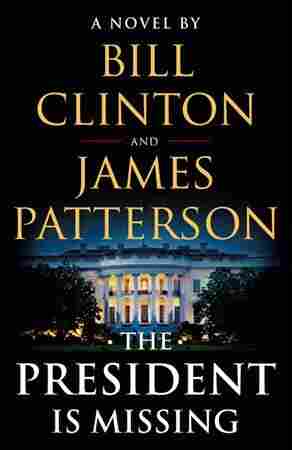 The President Is Missing

by Bill Clinton and James Patterson

There's a new novel out Monday — a political thriller told from the perspective of a U.S. president who's been called to testify as his opponents lay the groundwork to impeach him. The narrator, President Jonathan Duncan, describes the scene toward the beginning of the book:

I am alone at my chair. No aides, no lawyers, no notes. The American people are not going to see me exchanging hushed whispers with an attorney, my hand over the microphone, removing it to testify that I have no specific recollection of that, Congressman. I'm not hiding. I shouldn't have to be here, and I sure as hell don't want to be here, but here I am. Just me. The president of the United States, facing a mob of accusers.

Those lines were co-written by best-selling author James Patterson and a man who has himself faced impeachment: former President Bill Clinton. Their novel is called The President Is Missing. It follows a fictional president as he tries to thwart cyberterrorists who aim to completely cripple the United States.

Clinton and Patterson spoke to NPR about how realistic the book's plot is and the experience of impeachment.

Patterson: We talked to dozens of experts in this area and they do believe that this is possible and it's something — you know, on some level this will happen.

Bill Clinton Says He 'Does Not' Owe Monica Lewinsky An Apology

Beware The Twist! Bill Clinton Plans To Pen A Thriller With James Patterson

On whether a president could really order his Secret Service protection to stand down, as President Duncan does when he wants to meet someone in private

Clinton: The answer is, in theory, yes; in practice, it's hard, as you saw. Anybody besides the president who has Secret Service protection can actually sign off of it, and basically assume liability. And others have done it. We can find no example where a president ever did it. I never did. Every president wants to 'cause you just get tired of never being alone and in control of your destiny, but it's irresponsible to do.

Patterson: And there are several lawyers who said, "Yes, it could happen." You would also find some lawyers that say you couldn't do it, but you would have lawyers that say, "Yes, you can do it."

On a speech in which President Duncan declares, "Our democracy cannot survive its current downward drift into tribalism, extremism, and seething resentment. Today it's 'us versus them' in America."

Clinton: Well, I think this has been going on in some form or fashion since the '60s, and it was flaming in the '90s, and I was just lucky enough to have a tough enough hide and enough experience as a governor in a fairly conservative state to be able to bridge it and get a lot done with the Congress. ... Do I think Hillary got a bad deal? Yeah, I do. But the larger problem is that the system — because of organized interest groups, massive money, basically the business model of the way politics is covered — the whole thing favors paralysis. And the voters, when they vote in an emotional state, very often reinforce that. So this is, in the end, it's up to the American people, which is why I wrote it this way. I think, when they're calm, 65 to 70 percent of the American people say, "I just want somebody to get the show on the road and make it better than it is now." ...

Patterson: I don't think the book is terribly political. In fact, it isn't, and we really went out of our way. And in that speech, I mean, you definitely feel President Clinton, and I think that's good. I'm happy that we did it that way. And if I wasn't, I would have said, you know, let's calm the speech down.

On what Clinton wanted to communicate about the experience of impeachment

Clinton: It's important that people understand that you have to develop the capacity, if you really want to serve people, to basically almost disengage yourself from whether something is making you angry because it's not fair to you. It's almost like you can't exist — it's almost like you can't have feelings except for the American people. You shouldn't be mad except on behalf of the American people. Everything else has to be calculation so you can maximize your capacity to do the job you put your hand on a Bible and swore to do.

Kat Lonsdorf and Courtney Dorning produced and edited this interview for broadcast. Patrick Jarenwattananon and Nicole Cohen adapted it for the Web.