Accessibility links
Court Sees 'Hostility' To Religious Beliefs In Case Of Baker And Same-Sex Couple By upholding the right of a baker not to make a cake for a same-sex wedding, the Supreme Court rekindled the debate over whether religious freedom claims can trump protections against discrimination. 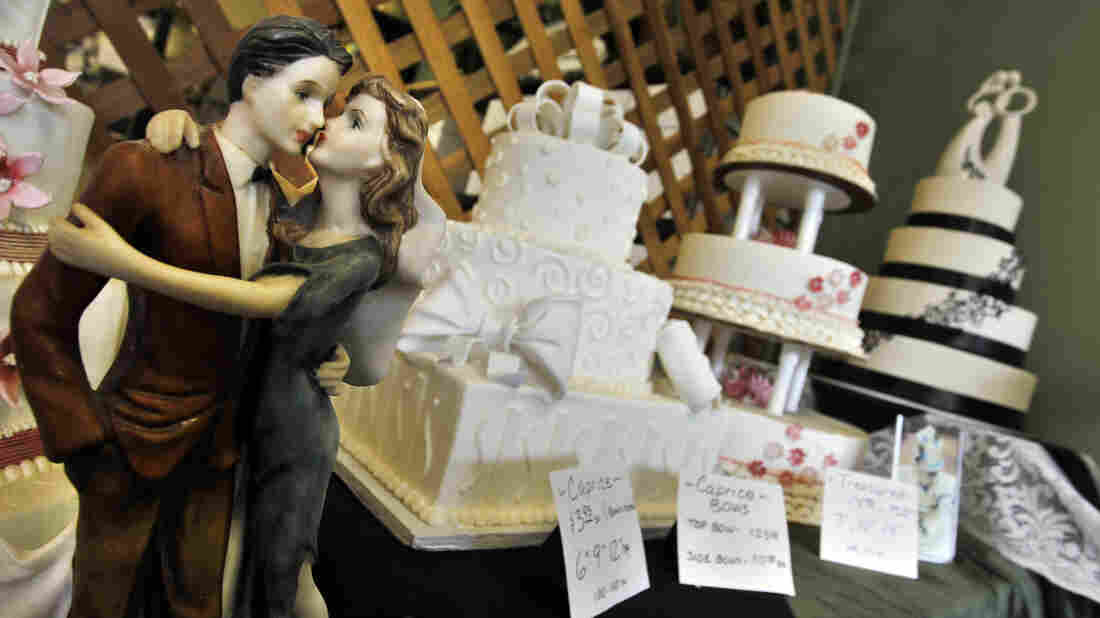 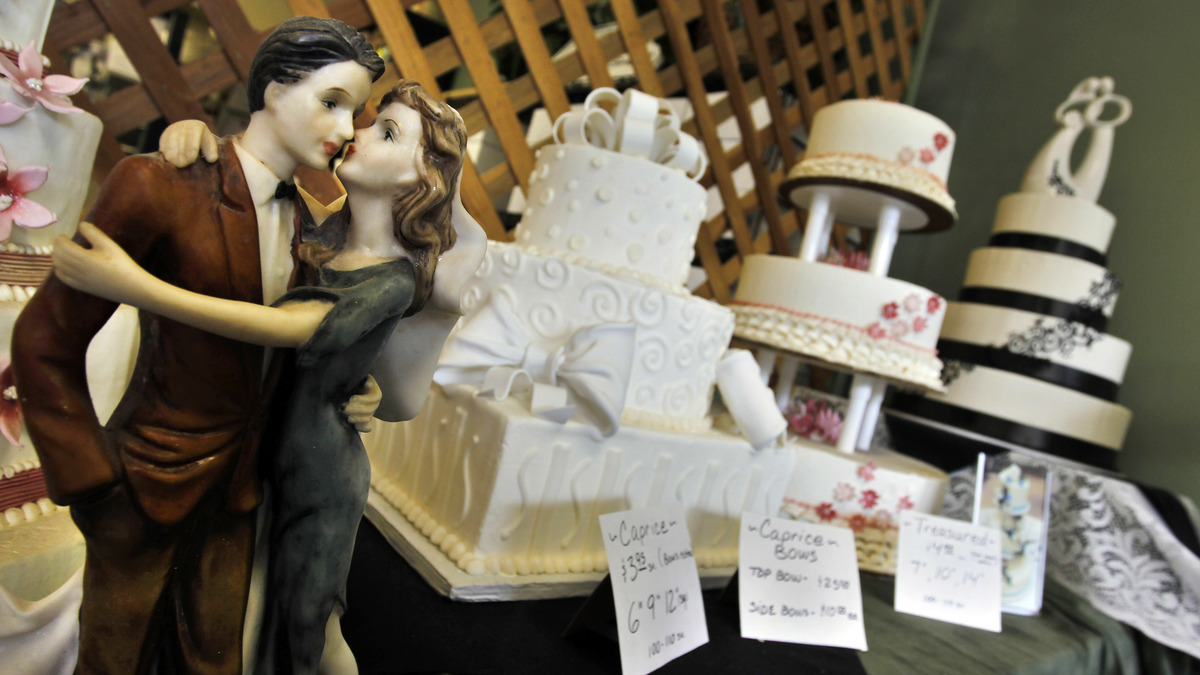 The wedding cake display seen at Masterpiece Cakeshop in Denver in 2013.

The U.S. Supreme Court, having legalized same-sex marriage in 2015, now clarifies that people are still free to oppose it.

On Monday, the court ruled 7-2 in favor of a Colorado baker who refused to make a wedding cake for a gay couple, citing his religious opposition to same sex marriage.

Jack Phillips, owner of Masterpiece Cakeshop, was asked by a gay couple in 2012 to create a cake in celebration of their wedding. Phillips, a devout Christian, told the couple he could not accommodate their request, because he believed that God intended marriage to be the union of one man and one woman.

The gay couple subsequently lodged a discrimination complaint against Phillips. The complaint was upheld by the Colorado Civil Rights Commission, which ordered Phillips to "cease and desist" discriminating against same-sex couples in his sale of baked goods. Phillips appealed the ruling all the way to the Supreme Court, and the court on Monday agreed with him, on the grounds that he was entitled to religious freedom.

The court ruling was hailed by the Alliance Defending Freedom (ADF), a conservative nonprofit organization that supported Phillips' appeal.

The court ruling was drawn narrowly, however, and civil rights groups reacted to the decision with some relief.

"The Supreme Court acknowledged that LGBTQ people are equal and have a right to live free from the indignity of discrimination," said Chad Griffin, president of the Human Rights Campaign. "Anti-LGBTQ extremists did not win the sweeping 'license to discriminate' they have been hoping for."

The American Civil Liberties Union (ACLU) noted in a statement that the court's decision was based on "concerns unique in the case" and that it "reaffirmed its longstanding rule that states can prevent the harms of discrimination in the marketplace," in the words of ACLU Deputy Legal Director Louise Melling.

The unique issue in the Masterpiece Cakeshop v. Colorado Civil Rights Commission case concerned statements made by commissioners about Phillips' assertion of a right to freely exercise his religious faith in accordance with his beliefs.

Writing for the court majority, Justice Anthony Kennedy said some commissioners "disparaged Phillips' faith as despicable and characterized it as merely rhetorical, and compared his invocation of his sincerely held religious beliefs to defenses of slavery and the Holocaust."

Such statements, Kennedy wrote, indicated "clear and impermissible hostility" toward his religious beliefs.

Kennedy had also argued that dissenting views on same sex marriage should be treated respectfully when he wrote the majority opinion in the court's 2015 Obergefell v. Hodges ruling, which legalized same-sex marriage in the United States.

The view that marriage is the union of a man and a woman, Kennedy wrote in that ruling, "has been held—and continues to be held—in good faith by reasonable and sincere people here and throughout the world."

In the Colorado case, Kennedy noted that other bakers in the state were not punished for refusing to make cakes with messages condemning homosexuality and same-sex marriage.

"The state can't play favorites," said ADF Senior Counsel Waggoner, speaking on a conference call with reporters. "I think that's what the court said loud and clear today. Because it did play favorites, because it expressed hostility towards [Phillips], that's why the case was reversed."

Unresolved in the Supreme Court decision was whether disputes over same-sex weddings and religious freedom objections might be seen differently if they were handled by civil rights commissions in a more neutral manner.

"There is no helpful national standard," says John Inazu, a professor of law at Washington University Law School who specializes in religious freedom claims. "The court's jurisprudence means that we're going to have state-by-state norms that vary quite a bit ... about what counts as protections for religious freedom."

"One of the consequences of this," Inazu says, "is that we're going to see blue state/red state arrangements deepen rather than come together."