Accessibility links
Trump Turns Philadelphia Eagles Event Into 'Celebration Of America' After most Eagles players decided not to attend a White House celebration of their Super Bowl victory, Trump dis-invited the championship team, and accused it of abandoning its fans. 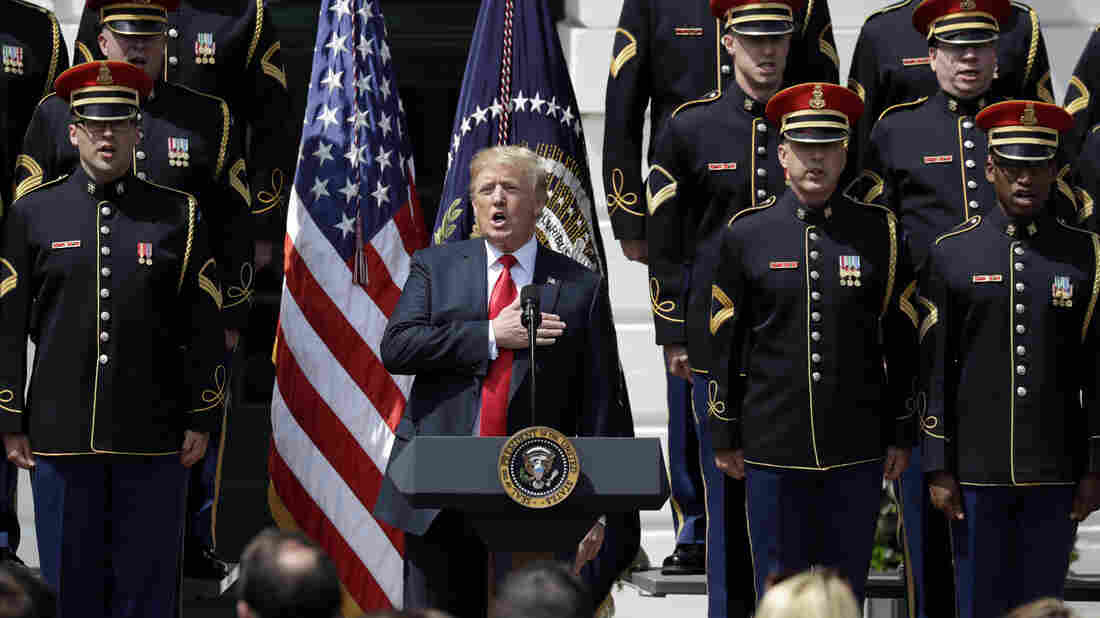 President Trump sings during a "Celebration of America" event on the South Lawn of the White House on Tuesday. Evan Vucci/AP hide caption 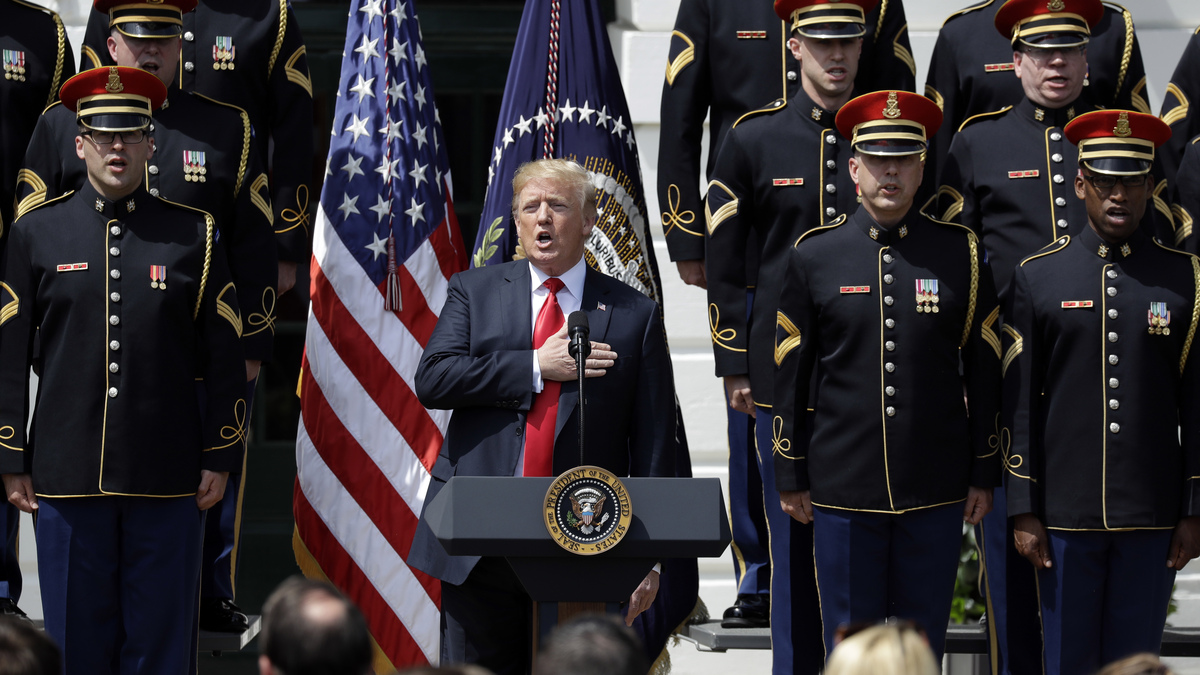 President Trump sings during a "Celebration of America" event on the South Lawn of the White House on Tuesday.

There was God Bless America, but no Swoop the Eagle. The U.S. Marine Band was there, but neither quarterback Nick Foles, nor head coach Doug Pederson, nor any member of the 2018 Super Bowl winning team was at the White House Tuesday for what was to be a celebration of the Philadelphia Eagles victory.

Instead, the team's fans gathered on the South Lawn heard a selection of patriotic songs, after President Trump dis-invited the team, when it became apparent only a handful of players were likely to show up to the event, as another battle in the unending culture wars played out over social media.

On Monday night, Trump tweeted that after being invited to the White House, "only a small number of players decided to come and we canceled the event." Then apparently referring to the NFL's new policy of allowing players to remain in the locker room during the playing of the national anthem rather allowing them to take a knee in protest on the field, Trump said "Staying in the locker room for the playing of our National Anthem is as disrespectful to our country as kneeling. Sorry!"

Several players, following the lead of former San Francisco 49ers quarterback Colin Kaepernick have taken a knee to protest the recent spate of shootings involving police and black men along with other issues — which Trump has seized on, seeing a political opportunity in this midterm year.

But, significantly, none of the Eagles took a knee in protest during the 2017 season. Eagles player Malcolm Jenkins did, however, engage in a raised-fist protest at points during the 2017 season and, at one point, Jenkins was joined by Rodney McLeod and the two men were supported by fellow Eagle Chris Long. Jenkins and McLeod are black and Long is white. 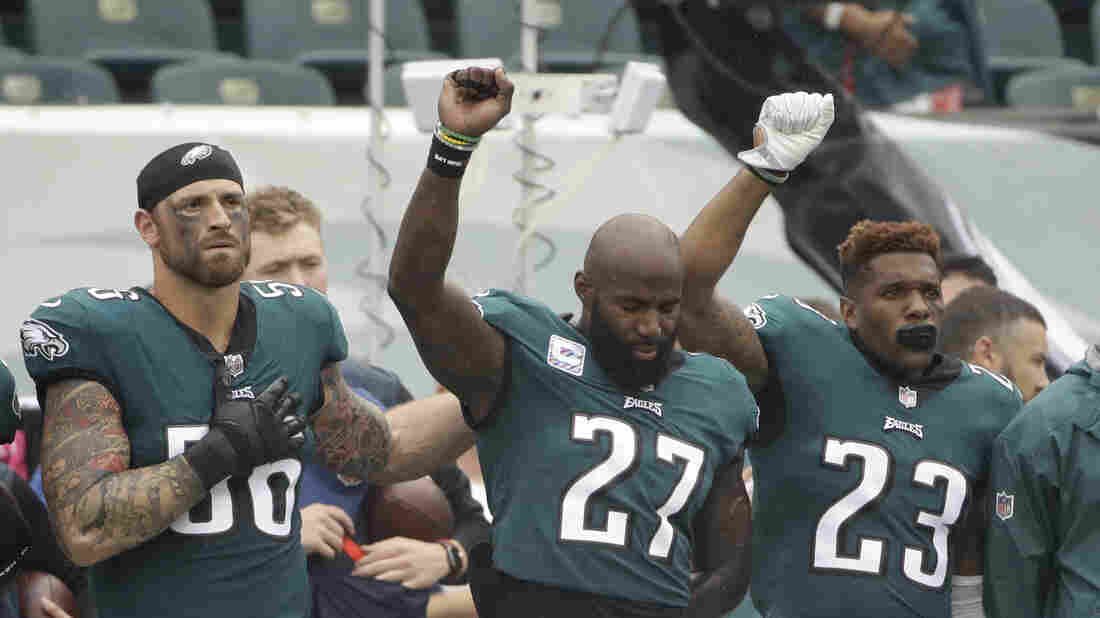 Philadelphia Eagles' Chris Long (56), Malcolm Jenkins (27) and Rodney McLeod (23) gesture during the national anthem before an NFL game against the Arizona Cardinals on Oct. 8, 2017, in Philadelphia. Matt Rourke/AP hide caption

Philadelphia Eagles' Chris Long (56), Malcolm Jenkins (27) and Rodney McLeod (23) gesture during the national anthem before an NFL game against the Arizona Cardinals on Oct. 8, 2017, in Philadelphia.

The NFL Players Association tweeted Tuesday morning it was "disappointed" in the president's decision, and that "NFL players love their country, support our troops, give back to their communities and strive to make America a better place."

At Tuesday's event, which Trump called "even bigger than we had anticipated," he said that "we stand to honor our military, and to honor our country, and to remember our fallen heroes who never made it back home."

Trump added, "we stand to honor our fellow citizens, and our magnificent Constitution," overlooking, perhaps, the First Amendment which protects various rights associated with protesting.

Trump Picks Fight With The Eagles, Philadelphia Takes It From There

White House press secretary Sarah Sanders said Tuesday just prior to the White House event that "the vast majority of the Eagles team decided to abandon their fans." She also called the decision of many of the team's players not to attend the event with Trump "a political stunt by the Eagles organization."

And the winner of the 2018 NBA crown? Don't expect them at the White House either. Cleveland Cavaliers star LeBron James said Tuesday "I know no matter who wins this series, no one wants the invite anyway. So it won't be Golden State or Cleveland going."

The Trump administration's record with visiting sports teams is a mixed one. The Pittsburgh Penguins, last year's winners of hockey's Stanley Cup, and baseball's World Series winners Houston Astros did attend. Last year's Super Bowl champs, the New England Patriots attended a White House event in their honor too, although, not all players including star quarterback Tom Brady, showed up.

"I think the president has made it pretty clear he's going to try to divide us, all of us in this country, for political gain," Warriors coach Steve Kerr said Tuesday. "So it's just the way it is. I think we all look forward to the day when we can go back to just having a celebration of athletic achievement and celebrate Americans for their achievement, their good deeds."