Accessibility links
What Americans Told Us About Online Shopping Says A Lot About Amazon Of Americans who shop online, 92 percent have shopped on Amazon, according to a new NPR/Marist poll that shows the company creating new shopping habits and retaining a striking amount of trust. 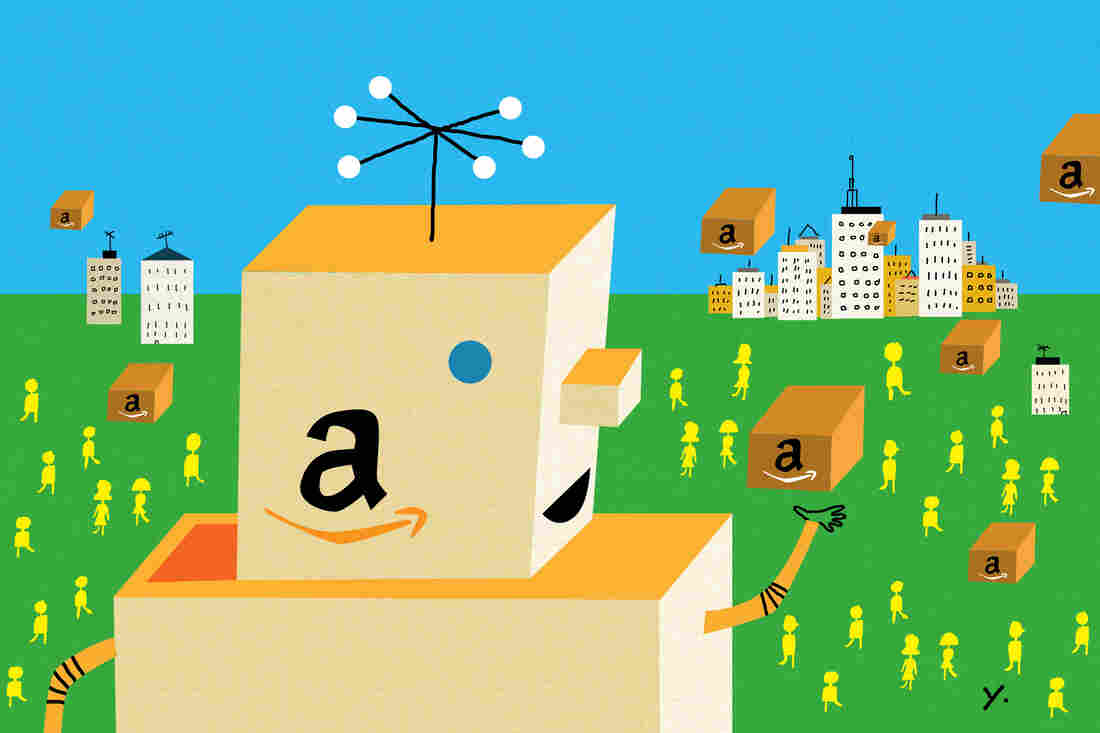 Close to two-thirds of Americans say they've bought something on Amazon, according to a new NPR/Marist poll. That's more than 90 percent of America's online shoppers. James Yang for NPR hide caption 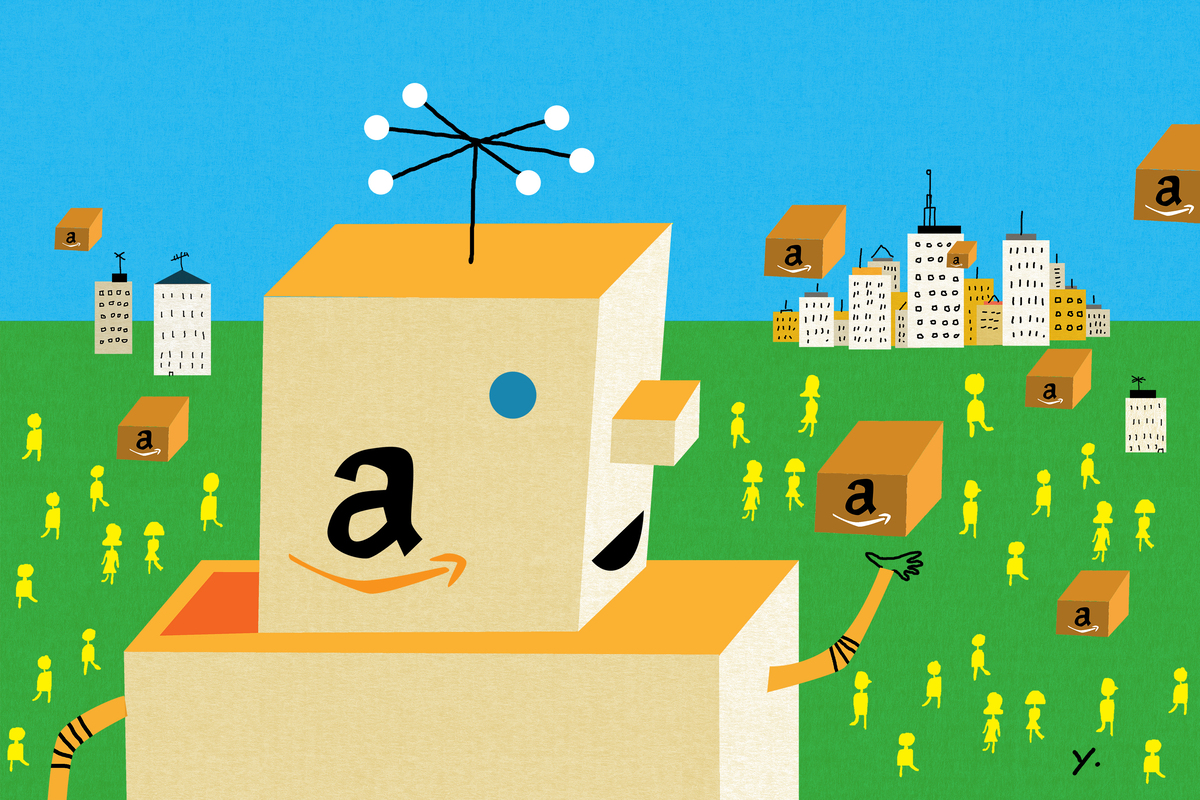 Close to two-thirds of Americans say they've bought something on Amazon, according to a new NPR/Marist poll. That's more than 90 percent of America's online shoppers.

On a cold December night last year, a meeting was called in the lobby of my apartment building. Concerned residents gathered to discuss a matter of great import: what to do about the swarms of packages jamming the lobby closet and overflowing into the entryway.

Unclaimed boxes were an eyesore and a nuisance. Finding the right package was starting to require gymnastic ability. And the boxes kept coming, by the dozens, maybe hundreds. Most of them were from Amazon: brown, with a smile on the side.

On that day, the residents of this downtown Washington building decided to tame the chaos. They voted that the lobby required a redesign. The boxes would get their own new package room, behind a password-activated door. This decision would reshape the building's first floor, but they bet it would raise the value of the property. At least the ungainly stacks would be safe in a separate room.

This is a picture of America, physically adjusting to the success of Amazon.com, the one-stop shop for everything.

In just two decades, founder and CEO Jeff Bezos has transformed from a Honda-driving online salesman of books to the world's richest man. He sits atop one of the most influential American companies at the center of an activity that makes up two-thirds of the U.S. economy: consumer spending.

Close to two-thirds of Americans now say they've bought something on Amazon, according to a new NPR/Marist poll. That is 92 percent of America's online shoppers — which is to say, almost all of them. More than 40 percent say they buy something on Amazon once a month or more often. In fact, when people shop online, they're most likely to start on Amazon.

E-commerce has been in hypergrowth mode since it started. Still, only about a 10th of all our shopping dollars are spent over the Internet. And in the overall retail universe, Amazon does trail far behind Walmart in annual sales. But in the world of e-commerce, Amazon is king.

"We can either go to Amazon on our own, at 9 o'clock at night, and have (our order) there in two days," said Melanie Hinchey, a mother of two who works at a tech company in Milwaukee. "Or we could wait until the weekend, and get everybody in the car, go out shopping and hopefully we find what we want."

The convenience that Hinchey talks about appears to be habit-forming. No wonder Amazon today is worth over $800 billion — the world's second-most-valued company, behind Apple. Amazon employs more than half a million workers worldwide. (Note: Amazon is one of NPR's financial sponsors.)

Amazon has slayed so many competitors that companies shiver when it enters into a new business. Even a whiff of such a move can rattle share prices of mighty corporations.

These days, it's much more than an online store. It makes movies and TV shows, has a massive cloud data-storage business where it keeps information from the government and numerous other companies, runs the Whole Foods grocery chain, offers people Internet-connected door locks, and makes the popular Alexa smart speaker.

To its critics, Amazon has argued that it's actually not as dominant as it seems.

"I think there's a big difference between horizontal breadth and vertical depth," Jeff Wilke, head of Amazon's consumer division, told The Wall Street Journal in October. He said Amazon accounted for less than 1 percent of worldwide retail and cited "incredible competition" in all of Amazon's different businesses.

"I don't think any one of these areas is a football game where there's only one winner," Wilke said.

In April, Amazon said more than 100 million people around the world pay for its Prime subscription, which in May went up to $119 from $99 a year in the U.S. The NPR/Marist poll found that among Americans, roughly 75 million online shoppers pay for Prime — plus another 35 million use someone else's account. Put together, almost two-thirds of American online shoppers are living inside the Amazon retail universe.

Details Of The NPR/Marist Poll

"I buy things like soy milk and body wash and shampoo — things that are shelf-stable that I know I'm going to use every week — via Prime," Hinchey said. "They just come once a month. I don't even have to think about buying those things. It's a bit less of a mental load."

This kind of shopping for basics online — batteries, toothpaste, garbage bags, cereal, canned food — is a pretty new behavioral shift. According to the NPR/Marist poll, most Americans have never shopped for basic household goods or nonperishable groceries on the Internet. But the people who have tend to buy those things on Amazon.

The main draw online shoppers cite is two-day shipping. Though most retailers now offer this perk, people continue to associate it with Amazon, which all but willed this cultural change into existence. Bezos had originally appalled Wall Street when he announced what promised to be a money-losing proposition of unlimited two-day shipping to get people to pay into a yearly "membership."

These days, Amazon's many tentacles have put the company in the crosshairs of competitors and critics from many directions. Privacy advocates have raised alarms about Amazon's data-gathering inside people's homes. Reports have scrutinized instances of harsh working conditions. Retailers have blamed Amazon for bankruptcies, hundreds of store closings, historic meltdowns and the death of America's malls.

President Trump has emerged as a powerful detractor, criticizing Amazon's relationship with the U.S. Postal Service and Bezos' ownership of The Washington Post. There has also been talk that the president could decide that Amazon is too big and needs to be broken up.

"Amazon has primarily escaped antitrust scrutiny because antitrust has become so focused on consumer welfare," said Lina Khan, director of legal policy at the Open Markets Institute, a think tank.

Khan, who has studied Amazon, said the government and the courts apply the laws in a way that focuses on whether companies are hurting customers. Some scholars argue that is still the right approach for Amazon as it has been for other companies historically.

But in Khan's view, with Amazon, the issue is less about the short-term interests of consumers, but the suppliers, producers, retailers and competitors in all the areas where Amazon is dominant — many of whom now depend on Amazon to reach their own customers.

"I think that's the other side of Amazon's power that is often neglected," Khan said. "It shows how if you are amassing market power, antitrust won't necessarily respond to that anymore, unless it's obvious that you're also hurting consumers in some way."

And as far as American consumers go, Amazon's heft has not hurt the brand, which remains one of the most trusted. The NPR/Marist survey found a staggering 67 percent of American online shoppers say they have "quite a lot" or "a great deal" of trust in Amazon to protect their privacy and personal information, even though the majority of them had little to no such confidence in online retailers in general.

Yet for all their love of online shopping, Americans still like their stores. When Amazon shoppers were asked whether they would prefer to shop in stores or online, a majority answered: The store.