Accessibility links
Game 3 Of The NBA Finals A Sort Of Homecoming For Golden State Warrior Quinn Cook The NBA Finals continue to thrill fans, but for this Warriors reserve guard, it's an extra special moment. Two years ago Cook was slogging through basketball's minor leagues. 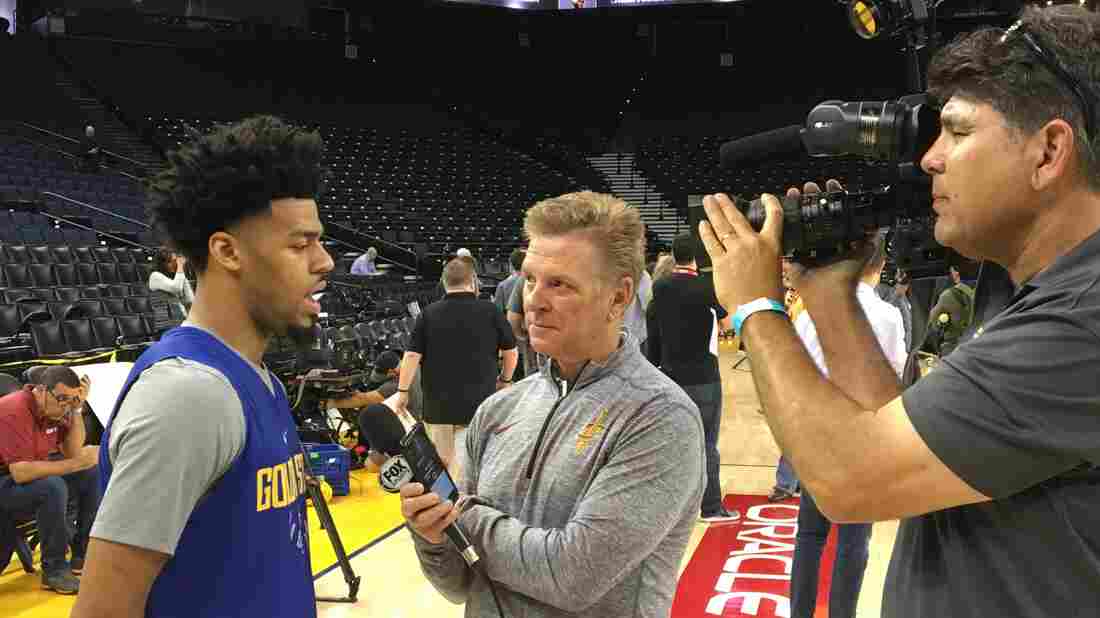 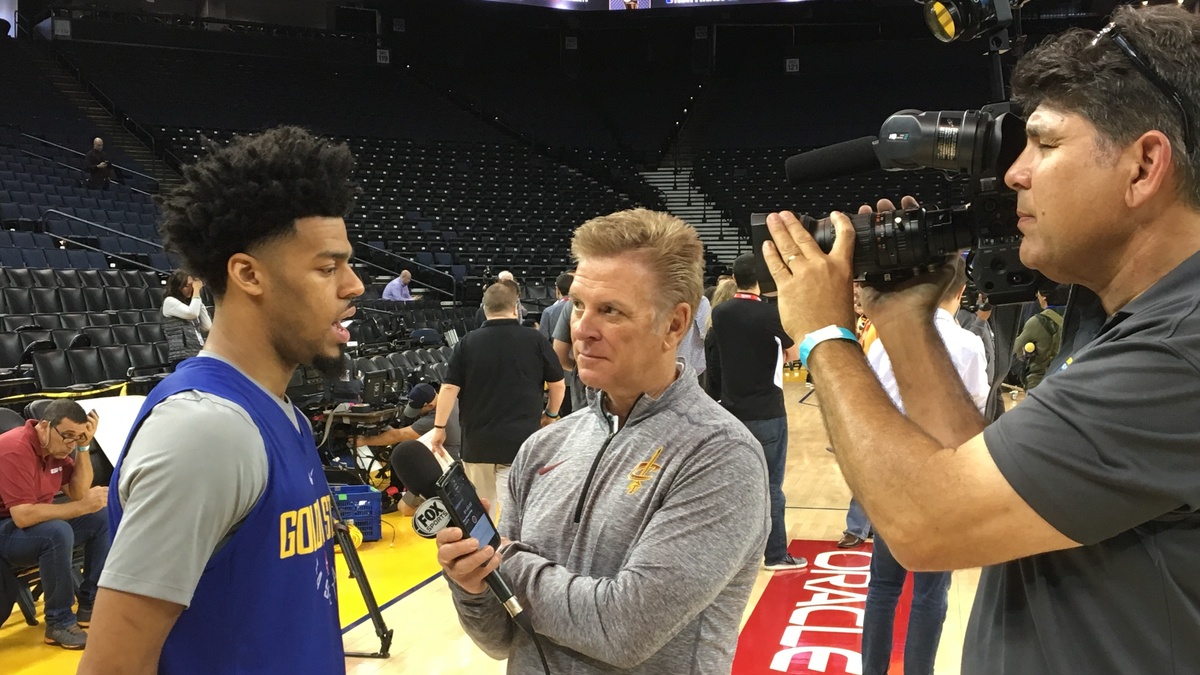 With a few minutes left in game two of the NBA Finals between the Cleveland Cavaliers and the Golden State Warriors, this past Sunday, something unremarkable happened: Quinn Cook scored.

It was a layup, and it happened when the game already was decided and the bench players, like Warriors reserve guard Cook, were on the court. Unremarkable. Still, there was Cook in a Warriors uniform, playing and scoring in the Finals. Kind of amazing for those who followed his story.

The NBA Finals are in Cleveland for Wednesday's Game 3 and the Warriors lead the series 2-0. For Cook, it's a homecoming of sorts because he started his professional career in Ohio. It was a start he never imagined. A star in college, Cook had to grind through pro basketball's minor leagues. Now, suddenly, he's on the brink of winning an NBA title.

Two years ago, on the NPR podcast Embedded, we described how Cook helped Duke win the NCAA men's Division 1 basketball title in 2015, and then a few months later, he gathered with friends and family to watch the NBA draft.

But Cook didn't get picked, and the hoped-for celebration didn't happen.

"I thanked everybody who came [to the draft watch party], about 20 people that came," Cook told NPR. "My mom knew I was about to break down. [I] went outside, broke down in my brother's car. It was painful."

Three of his fellow Duke teammates were drafted in the first round. Cook headed for the Canton Charge of the D League. Now it's called the G League. It's the NBA's minor league, where talented but not-ready-for-primetime basketball players go, hoping it's a step to the NBA.

Early on in the season, Cook said he resented having to go the D League route. But he learned to embrace it and was named Rookie of the Year.

Despite his success, Cook still didn't get a coveted call-up to the NBA.

"It's been the story of my whole life," he told NPR in 2016. "[Maybe] it's just my size or, I don't know. I was just always overlooked growing up. Y'know that's what my agent was telling me, I mean, you've had this happen before. You just got to go to work and show everybody that you belong in the NBA."

Stutter stepping to the NBA

After a second successful D League season, in which Cook was named Most Valuable Player in the D League All Star game, he stutter-stepped his way toward the NBA.

He was signed and cut by New Orleans, Dallas, New Orleans again and Atlanta. Then last October, Cook signed what's called a two-way contract with Golden State. The contract tied him exclusively to the Warriors G League team, in Santa Cruz, Calif., while allowing a limited number of appearances with the NBA club. But when Golden State's superstar guard Steph Curry was injured late in the regular season, Cook's appearances became frequent.

Basketball underlings are told to make the most of their minutes, when they get them. Cook certainly did that during his big chance with the Warriors. He scored in double figures 14 straight games right before the 2018 playoffs began. 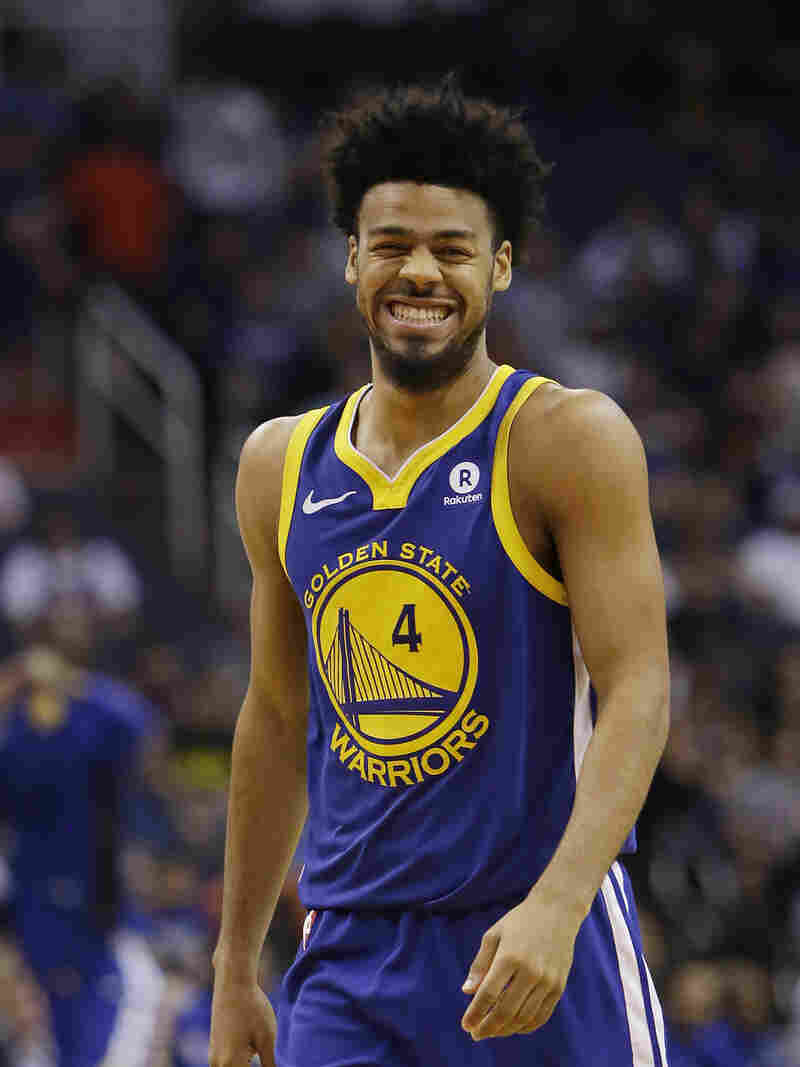 Golden State Warriors guard Quinn Cook in the second half during an NBA basketball game against the Phoenix Suns on April 8, 2018, in Phoenix. Cook started his basketball career in Ohio, where Game 3 of the NBA Finals happens on Wednesday. Rick Scuteri/AP hide caption

On April 10, Cook took a big step toward long term. He signed a two-year contract with the Warriors.

The Warriors assembled for Media Day before the Finals, and Cook handled his duties like a veteran – whether it was recording a promo for the Cartoon Network, or joking with Guillermo from Jimmy Kimmel Live!

Still, he admits having "pinch me" moments about where his journey has led.

"As soon as we won [the Western Conference Finals which put Golden State in the championship series], we started walking to the locker room and I broke down a little bit," Cook says. "And then just coming in here today, [you see] the NBA Finals logo everywhere and it hit me then like 'wow' this is really the NBA Finals.

"I could tell you who's been in the NBA Finals since 1989, '90, probably," Cook continues. "To be here it's a dream come true. But I just don't want to be here. I want to win. [My teammates] want to win another championship."

And despite the tearful draft night three years ago, and the roller-coaster ride since then, Cook says he's glad it went the way it did.

"I'm happy y'know I had to wait that long and really push myself even harder," Cook says. "I knew there would be a time, like I told you, y'know back then, that I had to wait my turn, it wasn't my turn yet and I finally got the right opportunity, the right situation, I took full advantage, and just being here on this team, just learning so much from these guys. You can do nothing but get better."

Cook's post-season learning curve has been steep at times. In the Western Conference finals against Houston, Cook missed a potential game winning shot at a crucial moment, in what turned out to be a Golden State loss. In the first two games of the Finals, he's played a total of three minutes.

But you have a sense if there are more opportunities — to play and to make an impact — he'll be prepared.

Because Quinn Cook is nothing, if not ready.