Accessibility links
'Mariam Sharma' Nails The Fun Road-Trip Vibe Summer is the season for road-trips, and Mariam Sharma Hits the Road makes for a saucy, yet emotional ride, following three Pakistani-American teens on a journey through the Deep South. 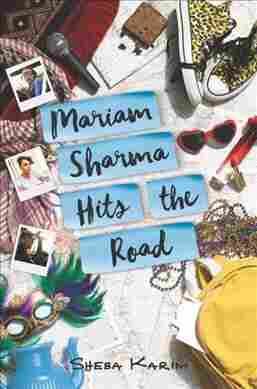 Summer is the season for road-trips, and Mariam Sharma Hits the Road makes for a saucy, yet emotional ride. It follows three Pakistani-American teens as they journey through the Deep South, looking for escape, answers, trouble, and above all, a fabulous adventure.

Mariam Sharma has two best friends: Ghaz is a gorgeous party girl constantly at odds with her very conservative parents, and Umar is a devout Muslim golden boy who hides the fact that he's gay. In a lot of ways, Mariam's liberal, non-traditional mother means she has it easier than her friends. But she has her own troubles: Her father abandoned them when she was just a kid, and now she can't seem to let herself fall in love.

When Ghaz calls to say that she's in trouble with her family, it isn't exactly a surprise: Her scantily-clad picture is on a giant billboard in Times Square for the whole world to see, and her modeling debut has gotten her locked away in her room, possibly forever. Mariam and Umar decide to break her out and take an epic road trip away from their problems. His parents think he's going to the Islamic Association of North America convention — and he is — but first, they'll take a wild tour of all the barbecue joints, drag shows, and honky-tonks the American South has to offer.

The journey bounces gamely from fun, identity-affirming parties to deeply upsetting encounters with racism and Islamophobia, making for a wild and harrowing trip. But the one thing that feels more perilous than accidentally playing the call to prayer in a diner full of good old boys is confronting the demons within — Ghaz's abusive history with her family, Umar's inner conflict about what it means to be both Muslim and gay, and Mariam's fear that deep down, she's just like her dad, unable to commit to loving anyone but herself.

Film-Loving 'Twinkle' Is A Star On The Page

In my experience, long drives with friends are a mashup of shared jokes, intense conversations, singing really loudly, and the occasional long boring stretch. Mariam Sharma really nails this vibe. Even though Mariam, Umar, and Ghaz are dealing with a number of issues that center around their own culture and community, I found all the familiar elements of taking a best friends' road trip and was transported back to some of my own youthful adventures. I was also delighted by how openly they talk about sex, bodily functions, masturbation, religious anxiety, and other taboo subjects. This sort of deep and "vulgar" talk is key to the road trip experience, and it makes the characters come to life.

As the friends drive further and further south, I felt a creeping sense of anxiety. Every time they entered a new town, I was afraid for them, and the story doesn't look away from the dehumanizing racism that teens who look like Mariam, Ghaz, and Umar face every time they walk into a new space in America. It would have been easy for a violent moment to turn their trip into a different, much more tragic kind of story — and while there is great value in that sort of narrative, I found myself very moved by the different path that Mariam Sharma takes. Instead of relying on outside forces to build to its climax, it looks inward at every opportunity, emphasizing the traumas and triumphs within the characters' own hearts. In this way, it is both culturally specific and universal.

I don't mean to imply that this is a dark and brooding book. For all of its facing of issues, Mariam Sharma feels like a celebration of being young and on the road with good friends by your side. It embraces pop culture references without every leaning too heavily on them (RuPaul's Drag Race fans will feel right at home), making for a fast read that's fun, political, and the perfect addition to a summer travel bag.