Accessibility links
The Quiet Rage Of Mazie Hirono The Hawaii senator is the chamber's only immigrant. The Democrat, who asks every nominee whether they've ever been accused of sexual misconduct, has a passion belied by her cool affect. 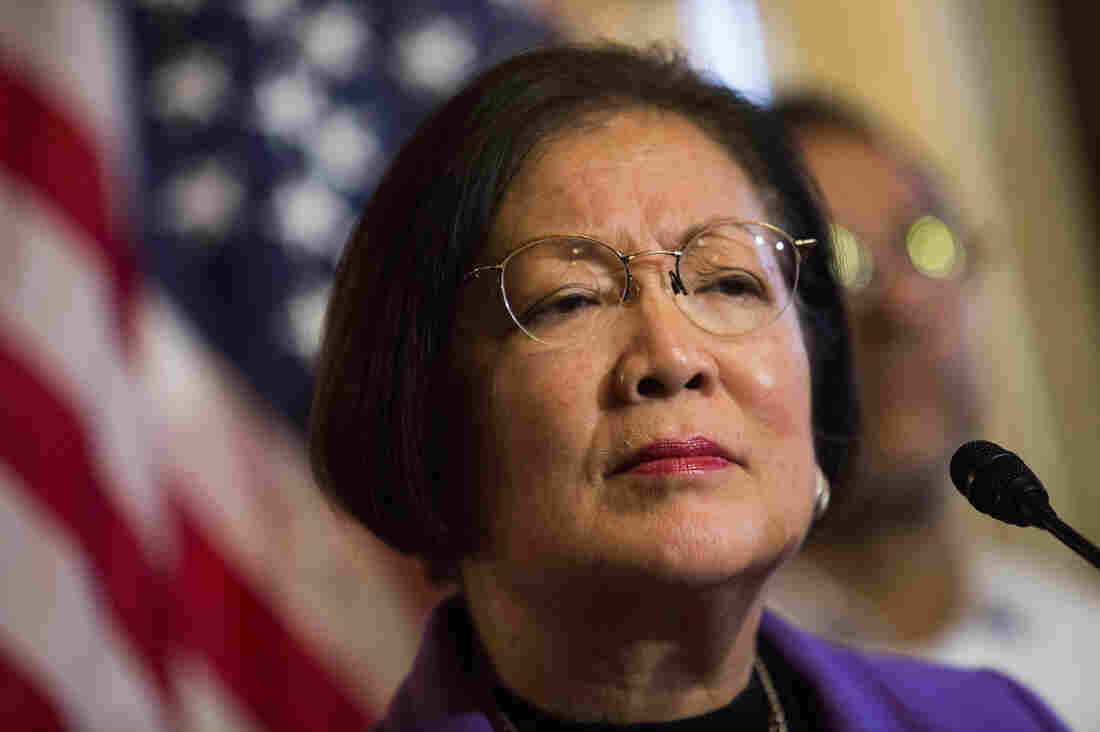 Democratic Sen. Mazie Hirono may have a quiet demeanor, but that shouldn't be confused for a lack of toughness. Drew Angerer/Getty Images hide caption 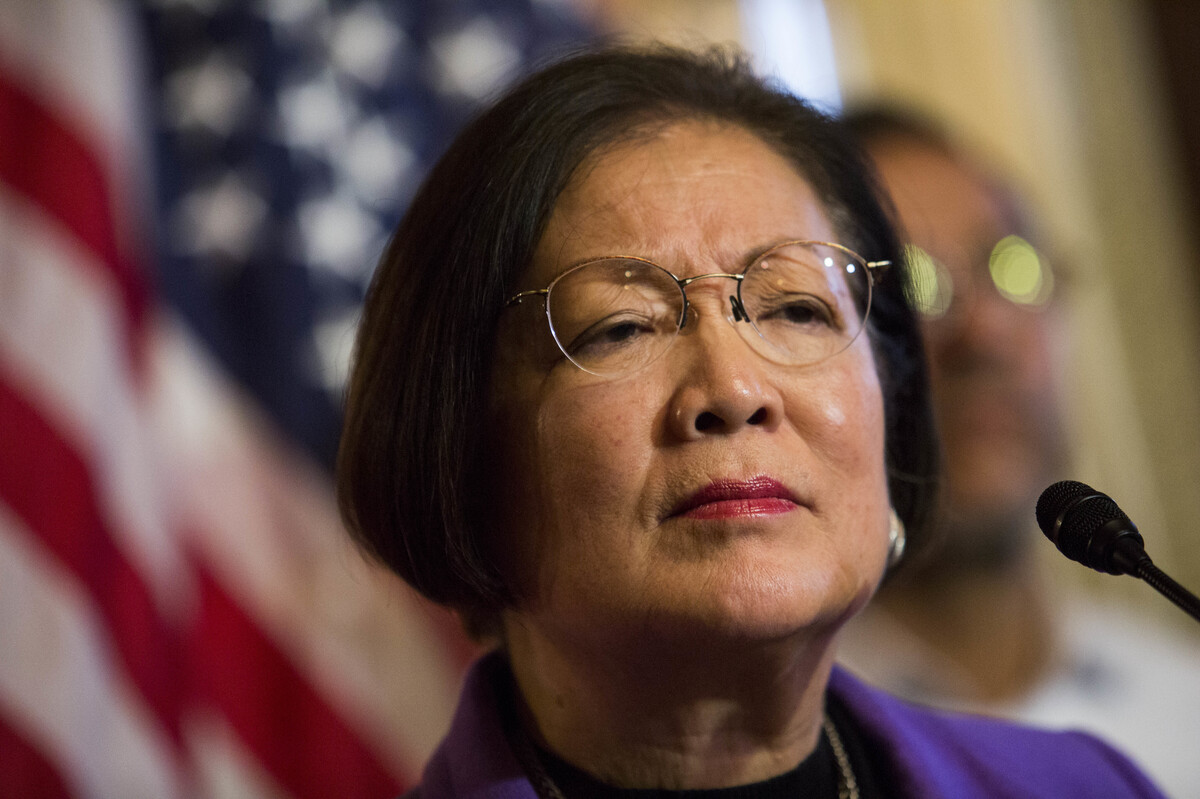 Democratic Sen. Mazie Hirono may have a quiet demeanor, but that shouldn't be confused for a lack of toughness.

Mazie Hirono used to be known as the "good girl" of Hawaii politics.

She was seen as polite, never in-your-face, not a boat-rocker. But now, that view has changed.

As one Hawaii columnist put it, she is a "badass."

"I always was," Hirono said in an interview with NPR. "I just wasn't very noisy about it. I've been a fighter all my life. I just don't look like that."

If that's considered liberal, as opposed to what I call justice and fairness, as I am wont to say, 'F*** them!' "

Sen. Mazie Hirono referring to her view that judges should be fair and qualified and care about individual and civil rights

The Senate's only immigrant takes that fight to President Trump, whom she openly calls "xenophobic" and a "liar." "To call the president a liar, that is not good, but it happens to be the truth," the soft-spoken Hawaii senator told Time recently.

The Democrat also takes that fight to Senate Judiciary Committee, as it weekly considers a tranche of Trump judicial nominees, abandoning long-standing rules that guaranteed significant time to examine each nominee's record. There are lots of big-gun Democrats on the committee, senators who get a lot more attention than Hirono. But she is perhaps the most dogged, albeit polite, questioner.

That doggedness will be even more important this summer because Republican leader Mitch McConnell has just canceled most of the August recess, mainly to push through more Trump judicial nominees before the midterm elections. McConnell's aggressiveness about judges is galling to Hirono.

"The word hypocrisy comes to mind," she said, adding that McConnell just wants to get "more right-wing, ideological judges" onto the courts. The Republican-controlled Senate has already confirmed 21 Trump appeals court appointees, compared with nine Obama appointees when the Democrats controlled the Senate at an equivalent time.

"As long as we're going to be here," Hirono said with a twinkle, "maybe we should pass something important like DACA or an infrastructure bill."

Because Senate Democrats are in the minority, they have little control over the legislative agenda, whether that is addressing immigration or infrastructure, or the pace of confirmation votes. But they do have the power to debate each nominee on the Senate floor for up to 30 hours. If they do that, look for Hirono to be there, even though she is up for re-election this year and may have to cancel planned events in her home state.

"If I had to wait around for somebody to pick me ... I never would have been picked"

Despite her often cool affect, she is no stranger to determined badassery.

She recalls a breakfast in 1994 when the Democratic candidate for governor, Ben Cayetano, tried to talk her out of running for lieutenant governor. He argued that she wouldn't help the ticket.

After Cayetano finished, Hirono said she looked him in the eye, "and I said, 'Well, that's all fine and good, but it's all bulls***. And I'm running.' "

By the time the primary happens, "people will know who I am," she recalled telling Cayetano.

Indeed they did. Hirono actually wound up getting more votes in that election than Cayetano himself.

"If I had to wait around for somebody to pick me for lieutenant governor," Hirono said, "I never would have been picked."

"People are getting screwed in this country every single second, minute, hour of the day"

In the Senate, Hirono is known as a "workhorse, not a show horse," as one of her colleagues put it. But she is the only senator who asks every nominee, for any position, whether they have ever been accused of sexual misconduct and whether they have ever signed a nondisclosure agreement. She wants these answers on the record in case future information shows a nominee lied.

She is the Senate's only immigrant and its first female Asian-American, and she had kept a pretty low profile. But she has put herself out there more, doing more media interviews, for example, in hopes it would help her advance causes she cares about.

"As I tell my staff," she said, "people are getting screwed in this country every single second, minute, hour of the day. And, by our efforts, if we can decrease that number, we will be making a difference. We will be doing our jobs."

Hirono plays the political game with a quiet rage, bred of personal experience.

The escape to America from Japan

Born on a rice farm in Japan, she lived with her mother and three siblings in harsh conditions. Her father, who had problems with alcohol and gambling, left the family with his parents, and by the time Hirono was 7, her mother was plotting an escape for herself and her children.

They would eventually travel by ship, in steerage for a week, to Hawaii. There, they lived in a boardinghouse, crowded into one room and sharing a stove and refrigerator with the other boarders. Hirono's mother supported them by working low-wage jobs.

"No job security, no health care, no nothing," she said, adding that she doesn't remember ever going to a doctor in those years. Her "greatest fear," Hirono said, was that her mother would get sick.

After graduating Phi Beta Kappa from the University of Hawaii, she worked as a legislative aide, and on political campaigns. But, by the time Hirono was 26, she knew she wanted more.

Hirono left Hawaii for Georgetown University Law School, paying for it with money she had saved up, plus student loans and a small scholarship. Hirono was nothing if not inventive about saving her pennies.

She even made her own yogurt by putting the starter and milk in a jar and — wait for it — "I'd wrap my electric blanket around it, and the next morning it would be yogurt!" Hirono said.

Her activism in politics sprang from the Vietnam War and from a book, The Feminine Mystique.

"Literally, the light bulb went on, and I thought, 'Why do I think that some guy is going to take care of me?' " she said. "Where did that come from?"

Indeed, she was 42 and serving in the Hawaii state legislature when she finally took the plunge, marrying Leighton Kim Oshima. Her friends were shocked by her choice of mate, because she had broken up with Oshima 13 years earlier, and, as she puts it, with a laugh, "It was one of those breakups where I burned all of his pictures."

Hirono sees herself today as strategic and able to build bridges.

In fact, the first bill she got enacted into law was with the help of then-Sen. and now Attorney General Jeff Sessions, a man with whom she disagrees on almost everything.

A soft heart and hard head 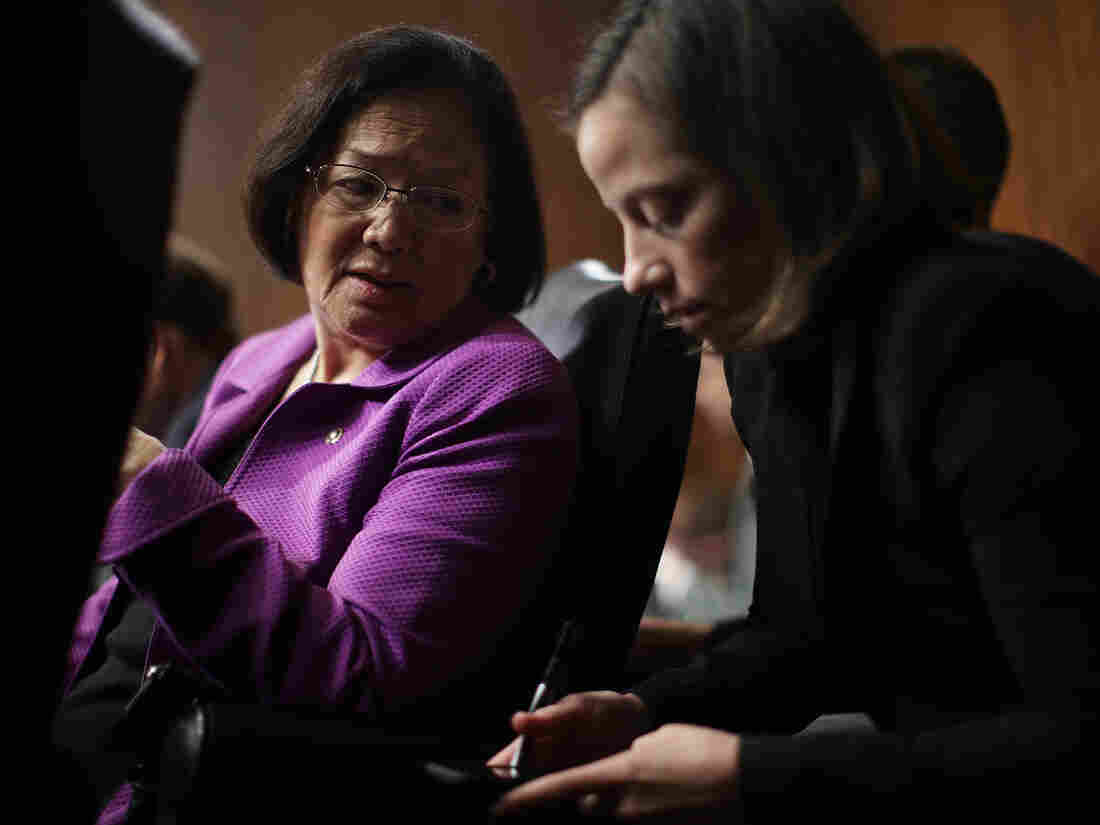 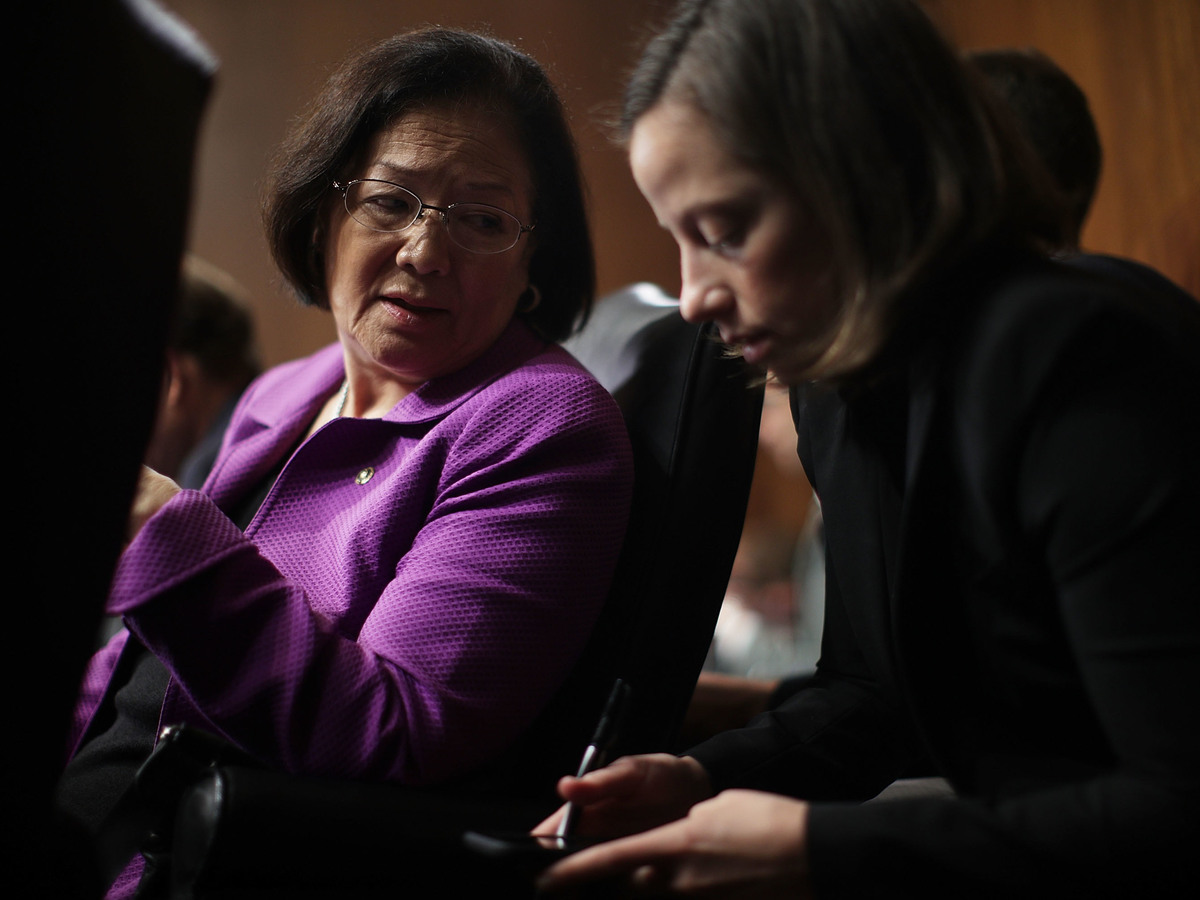 Hirono talks to an aide during the confirmation hearing of FBI Director nominee Christopher Wray.

Hirono was trying to move a stalled bill out of committee and onto the Senate floor for a vote. Because the bill involved a charitable tax provision to aid victims of a typhoon in the Philippines, there was a deadline.

Under Senate rules, an objection from just one senator would doom the bill. So she did something unusual. She went to the Republican cloakroom.

"I began to talk with him," she recounted, "and I said, 'Why is your caucus so against this bill?' "

Sessions explained that Republicans felt they had to be consistent in opposing this sort of special tax provision. Hirono countered with an impassioned plea, explaining why the bill was important to her and to many Hawaiians. And then she did something else unusual.

Reaching over to Sessions, she touched his heart. With her hand on his shirt, she said, "I am speaking to this."

"We don't often communicate that way," she noted.

Sessions heard her. He did officially object that night but made it clear he would would work out a compromise quickly that would accomplish Hirono's goals without "offending the budget niceties."

With Sessions' willingness and Hirono's doggedness, the bill was enacted into law the day before the deadline.

Four years later, however, Hirono went to Sessions to tell him she could not support his nomination to be attorney general, not just because they disagreed on so many issues, but in particular because Sessions "would come on the floor every week to rail against immigration reform."

Hirono's interactions with Sessions are an example of her soft heart and hard head. She has needed both in the past year.

Hirono's battle with cancer leads to a passionate plea

Diagnosed with kidney cancer, she has undergone two major operations. After the second one, a teeth-grindingly painful operation to remove 5 inches of a rib, she was out for 10 days, but back on the Senate floor in time for the big vote on repeal of Obamacare — and to deliver a message to her colleagues.

She had not planned to speak and had no prepared remarks, but she was uncharacteristically emotional.

GOP Health Care Bill Dies In The Senate, What's Next For Democrats?

GOP Health Care Bill Dies In The Senate, What's Next For Democrats?

Sighing audibly, she began, "I was born at home in rural Japan. I lost a sister to pneumonia, when she was 2 years old. She died at home, not in a hospital, where maybe her life could have been saved."

Her voice quivering, she paused. "It's hard for me to talk about this," she said. "I think you can tell. Give me a moment."

After gathering herself, she turned to her own kidney cancer and the treatment, enabled by having health insurance, that was saving her life.

"When I was diagnosed with kidney cancer and facing my first surgery," she said, "I heard from so many of my colleagues on the other side of the aisle, who wrote me wonderful notes, sharing with me their own experience with major illness in their families or loved ones. You showed me your care. You showed me your compassion."

Then suddenly, her voice rising, and her hand banging the table with each word, she demanded, "Where is that tonight?"

Hirono's voice is rarely that openly passionate. Indeed, she can often have a rather flat affect, an unassuming, even cool public presence that is in sharp contrast to her earthiness and colorful language in private.

After a long day, this reporter asked her why her skepticism about Trump judicial nominees is any different from Republican skepticism of Obama nominees.

Her reply was that what she wants are judges who are fair and qualified and "care about individual and civil rights."

And then, without missing a beat, she added, "If that's considered liberal, as opposed to what I call justice and fairness, as I am wont to say, 'F*** them!' "