Accessibility links
Exquisitely Cast 'Ocean's 8' Sparkles Ocean's 8 lacks the stylish touches that Steven Soderbergh brought to Ocean's Eleven. But a great cast and some clever commentary about women and Hollywood make it a whole lot of fun. 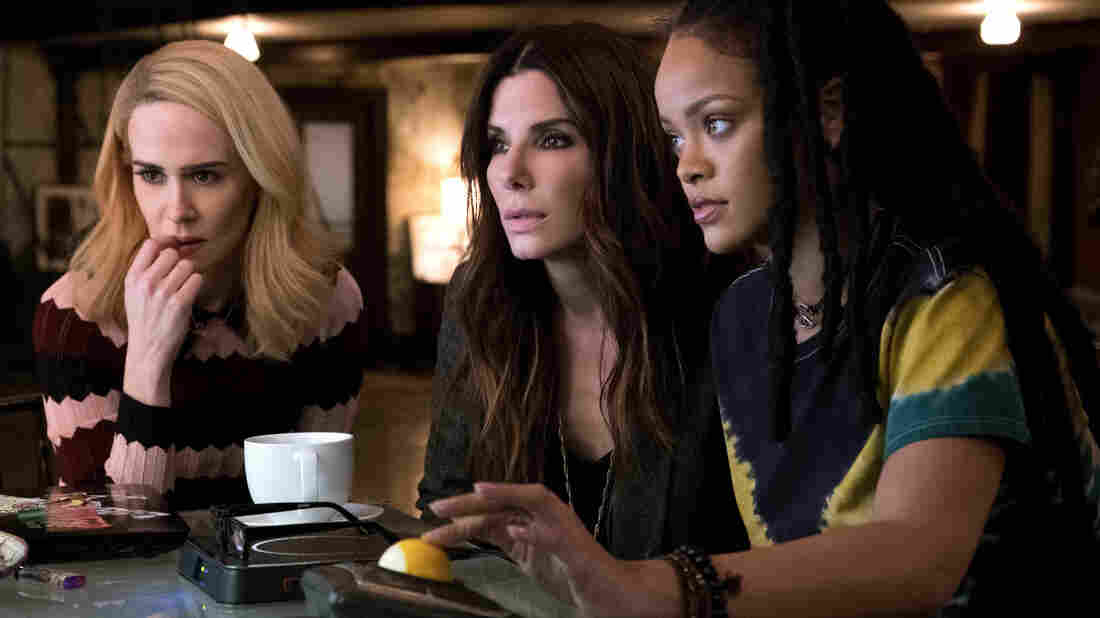 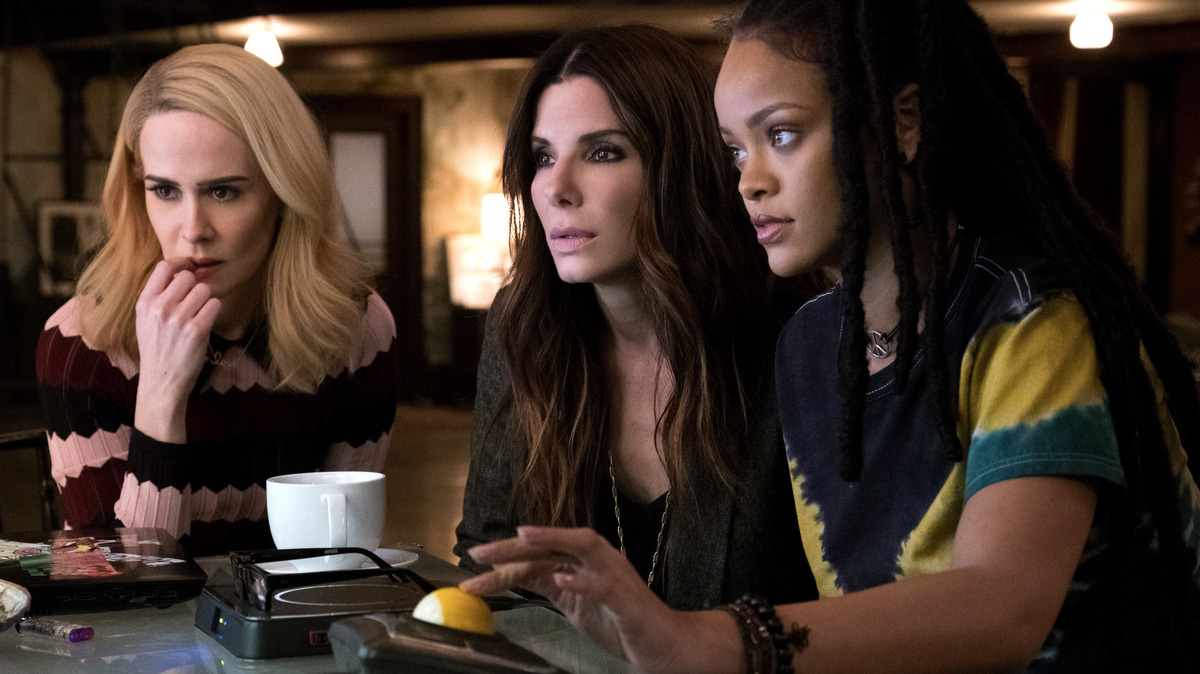 Steven Soderbergh's Ocean's Eleven was released in December 2001. It arrived early in a long winter in which debates bubbled along over what people wanted from entertainment in the post-Sept. 11 environment. Would they seek out simple diversions? Or something uplifting? Perhaps one of the reasons the film became so beloved is that it was the right movie at the right moment: irresistibly stylish, almost meaninglessly exciting, a heist film about incredibly charismatic men stealing unthinkable amounts of money from the least sympathetic victim imaginable — plus George Clooney winning the girl, too. It was silly, but also ... oh, it was all so dashing.

Ocean's 8 does not benefit from Soderbergh's mischievous, coiled-spring direction. Director/co-writer Gary Ross, who directed The Hunger Games and Seabiscuit (and, not for nothing, is a multiple Oscar nominee), makes softer films with fewer flourishes, notwithstanding a couple of moves that salute — or, if you like, lift from — Soderbergh. The script, which he wrote with Olivia Milch, doesn't have the pop of the best parts of Ocean's Eleven, so it relies heavily on its stellar cast.

How fortunate it is that the cast is so thoroughly up to the task.

Ocean's 8 revolves around eight terrific women: Sandra Bullock, fully out of the enormously endearing stumbly ingenue mode in which she first became famous; Cate Blanchett, operating without her regal carriage as a glam vision of petty crime; Anne Hathaway, playing the superficial star she was once accused of being (and delivering unto every doubter of her considerable comedic talent a knee in the gut); Mindy Kaling, playing a clever jeweler and doing entirely without the fizzy sparkle that's sustained her onscreen work since The Office; Sarah Paulson, sending up the Hollywood vision of the demure suburban mother; Helena Bonham Carter, somehow both embracing her daffy aesthetic and being utterly outside it; Rihanna, perhaps the current queen of the real Met Gala, here comfortably astride the line between that image of herself and a different one entirely; and Awkwafina, a real-life rapper who will also be appearing in Crazy Rich Asians later this year and who, I suspect, will soon have her own studio comedy film.

The heist plot in Ocean's 8 is much less byzantine than the casino-heist plot in Ocean's Eleven: The women will infiltrate the Met Gala and steal a Cartier diamond necklace so valuable that it's been in a vault for decades. How to get it out? They dupe Daphne Kluger (Hathaway), a hot, seemingly awful young actress who's been tapped as the event's celebrity host, into wearing it, and then they take it right off her neck. The team is led by Debbie Ocean (Bullock) and her BFF (?) Lou (Blanchett), who recruit the rest.

A side note: Why do I say "BFF (?)"? Because Bullock and Blanchett have such frankly hot chemistry in a couple of scenes that it's easy to wonder whether Debbie and Lou either have, or had in the past, what we might gauzily call A Thing. But that's never acknowledged, and to read it into the film raises the uncomfortable problem of Representation That Isn't — of queer characters who are only queer in the minds of others, not in their own actions or words. Either way, the two have either a very sexy friendship or a very sexy more-than-friendship.

Bonham Carter is a fashion designer, Kaling is a jeweler, Paulson is a fence, Rihanna is a hacker (named Nine Ball, with an actual nine-ball tracking ball for her computer, which is very cool), and Awkwafina is a pickpocket. All will play a role, as will an art dealer named Claude (Richard Armitage), whose relationship to the whole thing takes a while to play out.

What adds so many funny grace notes to Ocean's 8 is how much it is about Hollywood, and about actresses, while embracing its status as what we might call an "except with women" movie:

Ghostbusters — except with women.

The Karate Kid -- except with a girl.

And now, Ocean's Eleven — except with women. (Honestly, it should be Ocean's Fifteen, given that the wage gap means Debbie can get more women for the same price her brother hired 11 men.) (Just kidding, ha ha!)

Hathaway's performance, in particular, cannot be read without reference to the brutal public treatment she has absorbed in real life over ... being too earnest? Being too happy about winning an Oscar? Back in 2013, this reached the absurd point where a New York Times article concluding that people essentially despised her for no good reason at all was nevertheless titled "What Is Anne Hathaway Doing Wrong?" Anne Hathaway is here, in Ocean's 8, to tell you that you don't know squat about her, that she has heard every mean, nasty, cranky, ungenerous, sexist thing that can be said about her, and her response is ... comedy. Great, fearless, elegant, bright-eyed comedy that dares to ask the question, "I'm not this person — but what if I were? Wouldn't that be hilarious?"

Late in the film, there is a series of cameos that may not stand out to a young slice of the audience, but will be familiar to anyone who has been watching actresses on screen for a long time. And it's when you see those cameos that the full sweep of the film's comment on the Hollywood female image — a comment that's never heavy-handed, but feather-light — lands.

It's no coincidence that there are no boyfriends or husbands of any significance — other than Paulson's, because her adorable family is part of her cover. It's common for entire casts of men to care little about romantic relationships, but less common with casts of women. Are any of them in relationships? Are any of them interested in men? Women? Not during this caper. They're interested in money, just like they would be if they were men.

But at the same time, it's also no coincidence that Ocean's 8 was placed at one of the most famous events there is for the performance of celebrity femininity. The Met Gala is where every stitch of clothing is critiqued, as either too much or not enough. It is where actresses like the fictional Daphne and the real Hathaway go to be devoured for their missteps. But there is a moment, of course, when the plot dictates that we must see most of these actresses in their gala drag. And when you have watched them all play flesh and blood people and then you see them slip into a crowd of uncomfortably dressed stiffs, it invites an intriguing mental reversal. This glamour, this fancypants presentation, this is boring. This is mundane. What is interesting is watching these women work, scheme, crack wise with each other. The way the film manages to drool over the Met and the poshness of everything while still ultimately deflating it as little more than a lovely moment to play dress-up is quite smart.

There is still a very real concern for fashion. In particular, Blanchett's style here — platinum blunt cut, feathery bangs; slim-cut, but often wide-legged suits — it is an entirely different fantasy. It has nothing to do with the brand of femininity that the gala reveres. It is a punk-inflected, angular, indelible look that people will be copying for years. And if you know anything about Rihanna, you know that her look is never less than fully considered. Here, she has a sort of army-jacket chic that's so persuasive that it's almost — almost — possible to believe she could disappear into a crowd. (Although as one of my friends noted just after the film ended, it is perhaps the plot's greatest required suspension of disbelief that one must assume an inconspicuous Rihanna.) And she and Awkwafina are both so, so funny that you'll leave eager to see them closer to the center of the next project.

The shortcomings of the film's style, and in particular the mostly bland direction, will likely dull both reviews of it and reception of it by audiences — particularly given how central style was to Ocean's Eleven. But the charisma of the cast is tremendous, it's still a breezy and adventurous heist movie, and particularly in the performance from Hathaway, it's timely, in its way, just as its predecessor was.