Accessibility links
Uproar Continues Over Pro-Right Remarks By U.S. Ambassador To Germany The new U.S. ambassador to Germany upset his hosts, and Democratic senators back home, with his announced support for right-wing populists in Europe. 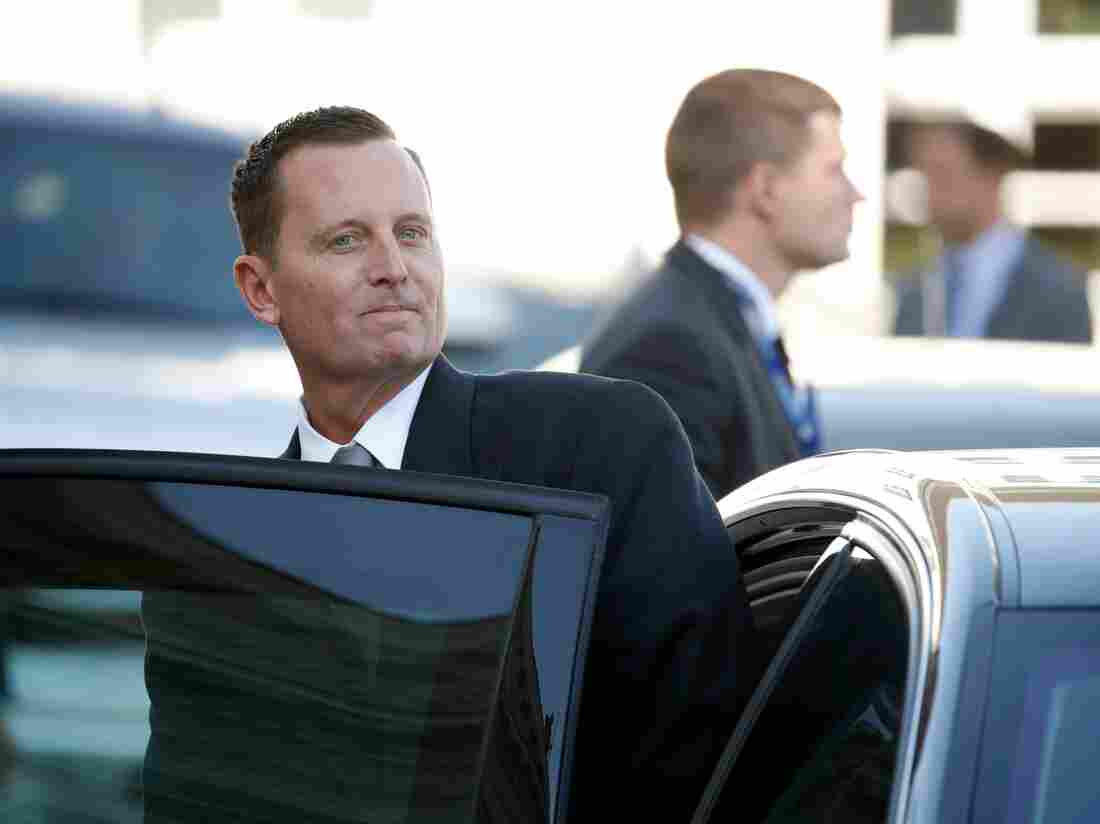 U.S. Ambassador to Germany Richard Grenell gets in his car after an accreditation ceremony for new ambassadors in Berlin on May 8. Odd Andersen/AFP/Getty Images hide caption 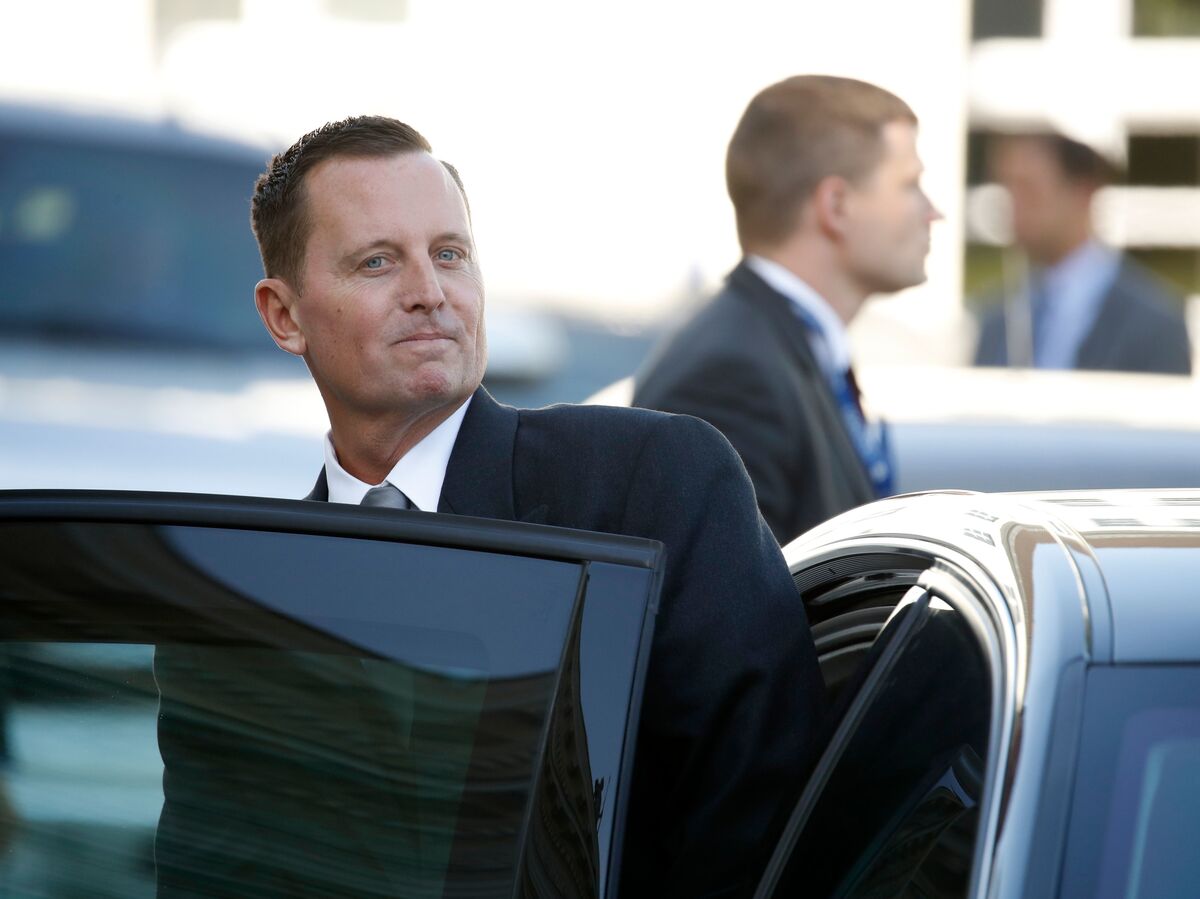 U.S. Ambassador to Germany Richard Grenell gets in his car after an accreditation ceremony for new ambassadors in Berlin on May 8.

Richard Grenell has been the U.S. ambassador to Germany for barely a month, but already politicians on both sides of the Atlantic are demanding he be recalled.

The uproar is over Grenell's recent comments on Twitter and the right-wing Breitbart news site in support of Europe's conservative politicians who he said are making gains against the political establishment. German and U.S. politicians charge that the remarks could amount to meddling in Germany's political affairs.

"Ambassadors have a right to express their opinion. They're representatives of the White House, whether it's this administration or other administrations," U.S. State Department spokeswoman Heather Nauert said in a news conference in Washington on Tuesday. "We hear them voicing their opinions and they're sometimes opinions people may or may not like."

John Kornblum, a former U.S. ambassador to Berlin during the Clinton administration, agreed. Contrary to what Grenell's critics claim, he says, there isn't a diplomatic handbook ambassadors go by.

"People are saying, 'Oh, he's breaking all of the rules of diplomacy,' " Kornblum told NPR. "Well, there essentially aren't any rules of diplomacy. What there are is a government or an ambassador's judgement as to what works and what doesn't work."

During a routine visit to Germany's Foreign Ministry on Wednesday, Grenell was asked to clarify remarks he made in an interview published over the weekend by Breitbart.

The right-wing news site quoted Grenell saying: "I absolutely want to empower other conservatives throughout Europe, other leaders. I think there is a groundswell of conservative policies that are taking hold."

He added, "The election of Donald Trump has empowered individuals and people to say that they can't just allow the political class to determine before an election takes place, who's going to win and who should run."

The U.S. ambassador also gushed over Austrian Chancellor Sebastian Kurz, calling him a "rock star." Kurz — who is critical of German Chancellor Angela Merkel — heads a right-wing government he formed with the Freedom Party of Austria, which has Nazi roots.

Under criticism, Grenell tweeted: "The idea that I'd endorse candidates/parties is ridiculous. I stand by my comments that we are experiencing an awakening from the silent majority - those who reject the elites & their bubble. Led by Trump."

Absurd. I condemn those comments completely. Don’t put words in my mouth. The idea that I’d endorse candidates/parties is ridiculous. I stand by my comments that we are experiencing an awakening from the silent majority - those who reject the elites & their bubble. Led by Trump. https://t.co/DjSX4SL3bf

But his decision to invite Kurz to dine at the U.S. Embassy next week during the Austrian leader's visit to Germany, as reported on Monday by German magazine Der Spiegel, irked many Germans, who wonder why the American ambassador assigned to Berlin was making overtures to a leader from another country. The U.S. Embassy described the planned meeting as a "common initiative" but declined further comment.

According to the German Foreign Ministry, State Secretary Andreas Michaelis told Grenell the fact Germans were upset over his comments showed the "high value that the German population attached to relations with the United States." The ministry added the American diplomat was "unhappy about the reactions his interview had triggered."

"In particular, he did not want to be perceived as the partisan of right-wing forces in Germany," the ministry statement said, adding Grenell "also wanted to create the conditions for a close and trusting cooperation with German partners."

That may be wishful thinking, given the impression many Germans have of the new American ambassador to Berlin, a post left vacant for nearly 16 months because of delays in the White House appointing and the Senate confirming staff.

Already on Grenell's first day, the 51-year-old diplomat who is a cancer survivor, former Fox commentator and served as spokesman of the U.S. mission to the United Nations under George W. Bush, managed to ruffle German feathers by tweeting that German companies should stop doing business with Iran following the U.S. pullout from the Iran nuclear deal.

And so a reporter on public broadcaster ARD recently quipped while showing footage of Grenell: "Is he smiling or baring his teeth?"

The U.S. Embassy declined to comment about the German reaction and Grenell has declined repeated NPR requests for interviews.

During a May 31 interview with KCRW Berlin, Grenell described himself as a "consistent conservative."

"A consistent conservative is probably an inconsistent defined political person," Grenell said. "So I'm very comfortable with my positions. I don't feel that I'm inconsistent, but from a purely partisan political criteria, I'm very inconsistent."

Some national politicians chose different monikers for him.

"It's somewhat like the colony's new master has arrived to take up his post," Sahra Wagenknecht, a German lawmaker whose left-wing group includes members of a party that succeeded East Germany's ruling Communists, said in an interview with public broadcaster ZDF.

"No government can allow itself to be treated like that," added Wagenknecht, one of several German politicians who have publicly said they want Grenell gone.

Some Congress members in Washington criticized Grenell too.

Sen. Jeanne Shaheen, a Democrat from New Hampshire, said in a written statement on Monday: "If Ambassador Grenell is unwilling to refrain from political statements, he should be recalled immediately. The United States does not accept foreign meddling in our elections, and we shouldn't have an ambassador attempting to intrude in another country's political affairs."

On Thursday, Sen. Bob Menendez, D-N.J., called for a State Department investigation into the issue.

When I raised concerns to Grenell about politicizing this post, he personally assured me that once he became Ambassador he would stay out of politics. This interview is awful - Ambassadors aren't supposed to "empower" any political party overseas. https://t.co/i8oOhqEk5k

But German legislator Omid Nouripour, who heads the foreign policy committee in parliament for the Green party, told NPR that Grenell should be given another chance.

"I don't think that the U.S. ambassador of Germany should be expelled," he said. "But it's obvious that the way he's speaking these days is not the language we're used to from diplomats. And I hope this is because he's new in his job and I hope he learned from the mistakes he did."

Nouripour added he recently extended Grenell an invitation to meet with him and his left-leaning pro-environment parliamentary group. The German lawmaker said: "I will try to [get] my own impression of him by inviting him for a meal with a non — non-establishment, non-conservative."

Former Ambassador Kornblum added that Grenell is hardly the first American diplomat to stir up trouble in Germany. He too was embroiled in controversy 19 years ago while establishing the new U.S. Embassy in Berlin. His insistence that German authorities change some of the roads around the site to enhance security sparked a backlash, he said.

"Europe is in the midst of a social-political upheaval which is very similar to that which is taking place in the United States, probably for more or less the same reasons," he explained.