Accessibility links
'I Could Never Fake It': Nick Offerman On Striving For Nonchalance Offerman has made a career out of playing colorful cranks — most notably, Ron Swanson, the boss on NBC's Parks and Recreation. He now stars as a middle-age single dad in Hearts Beat Loud. 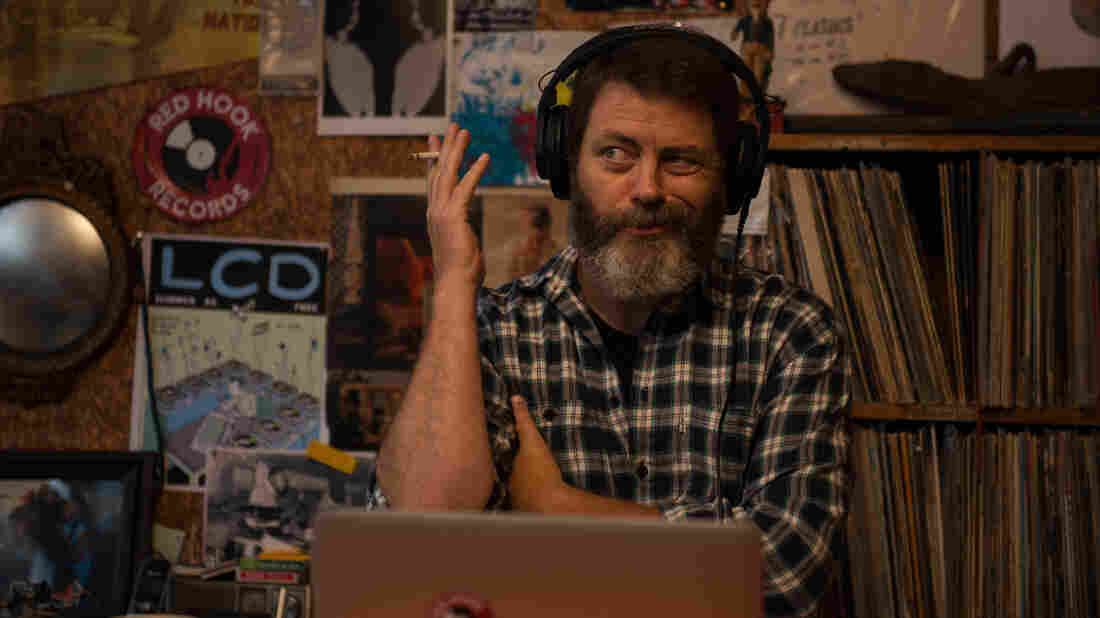 Nick Offerman plays Frank Fisher, a single dad, in Hearts Beat Loud. "This is the largest role, by far, I've ever had in a film," he says. Eric Lin/Gunpowder & Sky hide caption 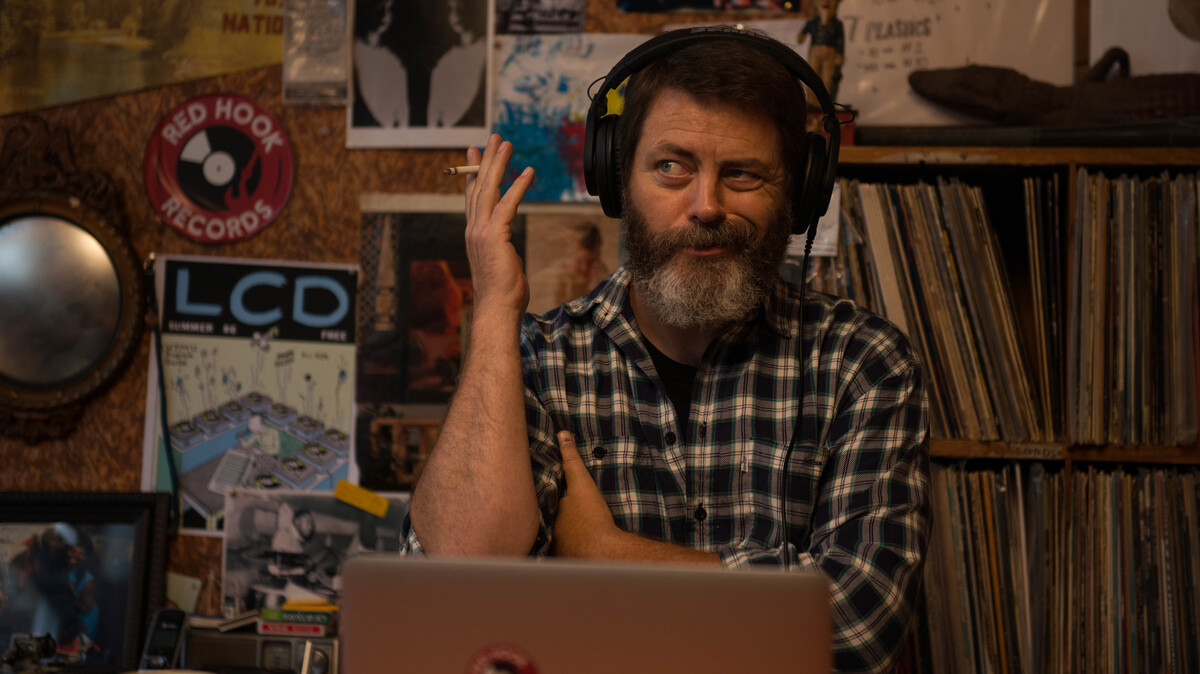 Nick Offerman plays Frank Fisher, a single dad, in Hearts Beat Loud. "This is the largest role, by far, I've ever had in a film," he says.

Nick Offerman has made a career out of playing colorful cranks — most notably, Ron Swanson, the hyper-masculine boss on the NBC comedy series Parks and Recreation.

But now, in the new film, Hearts Beat Loud, Offerman has a chance to play a more nuanced character — one he calls a "fully fleshed-out human being." Offerman plays a middle-age single dad who owns a struggling record store and wants to start a band with his teenage daughter, played by Kiersey Clemons.

Post-Ron Swanson, Nick Offerman Has The 'Gumption' To Be Himself

"This is the largest role, by far, I've ever had in a film," he says. And it's been an opportunity to explore vulnerabilities and relationships in a way he hadn't previously been able to as an actor: "I just got to play all these scenes that I had never gotten to do in 25 years in the business," he says.

On finding his niche in theater school as a woodworker

In the four years of theater school it became clear that I was not going to be cast well, and it was well-deserved. I was trying too hard ... I unwittingly thought that my sort of country rube persona would not be interesting to an audience, I needed to be much cooler and hip and urbane, and so I just tried way too hard, which made me bad.

Meanwhile, one of the classes we had to take as freshmen was scene shop. ... That was my first real wood shop, and it might as well have been the Land of Oz. I was immediately smitten.

I knew how to use tools. I had worked framing houses. I had built a lot of stuff with my dad, including a small barn. And I picked up the tools and I hammered them together and the rest of the class stood there staring at me with their jaws dropped. ... The guy running the shop said, "Hey, you can make wages in here. In your off-time, you can come in and I'll pay you to use these tools and I'll teach you to use the shop."

So that organically became my formula, where everybody saw that and they said, "Hey, let's not give Nick too many lines because of the bad acting, but let's throw him a bone, because then he'll build the whole damn set." And so I exploited that circumstance for years, and it really paid off. They kept me around and five lines became six. One year I had nine lines. That was a big year for me. Eventually, the penny dropped and I said, "Oh! I should just talk like me." And then things began to pick up.

The Movie Nick Offerman Has 'Seen A Million Times'

On struggling to appear nonchalant in auditions

The thing that's hard to conquer is: You're a broke actor. Every single job, it can be a guest star on some terrible TV show, but it will change your life. If you get it, it will pay for six months of rent, and so that lends a desperation to your audition and that's the secret to the whole thing, is learning to conquer that sensibility. I could never fake it.

On two turning points in his acting career

Not My Job: We Quiz Nick Offerman On The Finer Points Of Manhood

And the other thing was, I said, "I don't care if [LA is] not a theater town, I got to do a play." ... And so I looked all around and some great friends of mine, these casting directors hooked me up with this play, the lead of which was [Will & Grace actor] Megan Mullally [who later married Offerman].

And I was low. I was drinking too much bourbon. I was having a real tough time. And I got into this play, because I had feeling — and sure enough it saved my life. ...

Within the space of that play, my life changed. Our relationship began and I focused on working as a carpenter and this incredible new love relationship and suddenly going into these auditions, because my life was happy, that's where I found the nonchalance.

I had auditioned a handful of times for roles on The Office. And Greg Daniels, who created the American Office and Mike Schur [who was] sort of his star writer, they created Park and Recreation. And I guess Mike Schur had taken a shine to me at this one specific Office audition unbeknownst to me, and he wrote my name on a Post-it and put it on his computer monitor and, like, three years later when Parks and Rec was starting up he took that Post-it and said, "Oh yeah, I want to get this guy on my show."

And so they tried to put me in one role and it didn't work out. Coincidentally it was supposed to end up a love interest for Rashida [Jones], a notion which at the time NBC scoffed at. ... I was at the sporting goods store and they called me to say. "It's over." ... [But] by the time I came out to the parking lot, they called again and said, "OK, Greg and Mike Shur really want you on the show, so they're going to put you in this role of Amy [Poehler's] boss, supposed to be an older guy, but they're standing by it, they're being very stubborn." And I stood there and felt tears welling up and said, "That sounds fine, thank you."

I don't have a quick analogy for it, but I suppose [it's like] if you ... had to row a boat across the Atlantic Ocean, but for the middle passage a seagull swooped in and dropped off an out-board motor, so you could put your feet up for that time and say, "OK, I know I'm going to have to row again at some point, but right now I'm just enjoying these clouds a great deal."

Heidi Saman and Mooj Zadie produced and edited this interview for broadcast. Bridget Bentz, Molly Seavy-Nesper and Beth Novey adapted it for the Web.