Accessibility links
Immigration Debate Shines Spotlight On Divided House GOP House Republicans are struggling to find consensus on an immigration bill that can unify the GOP's ideological divide over how to address the legal status of people brought to the U.S. as children. 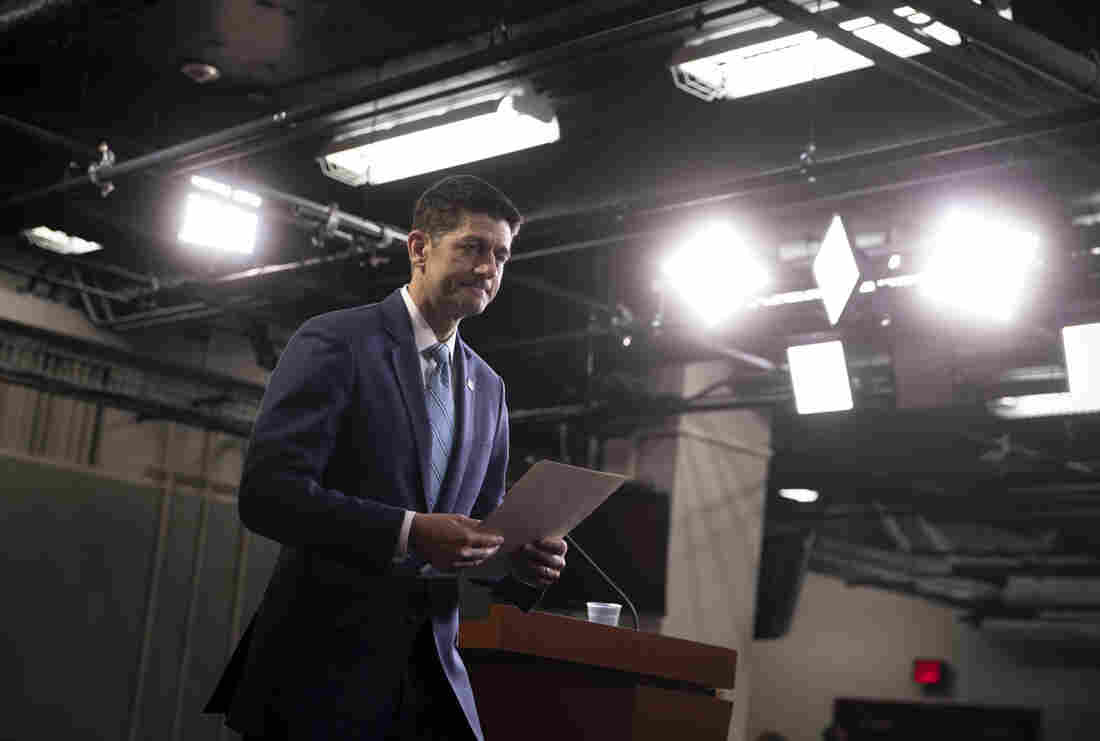 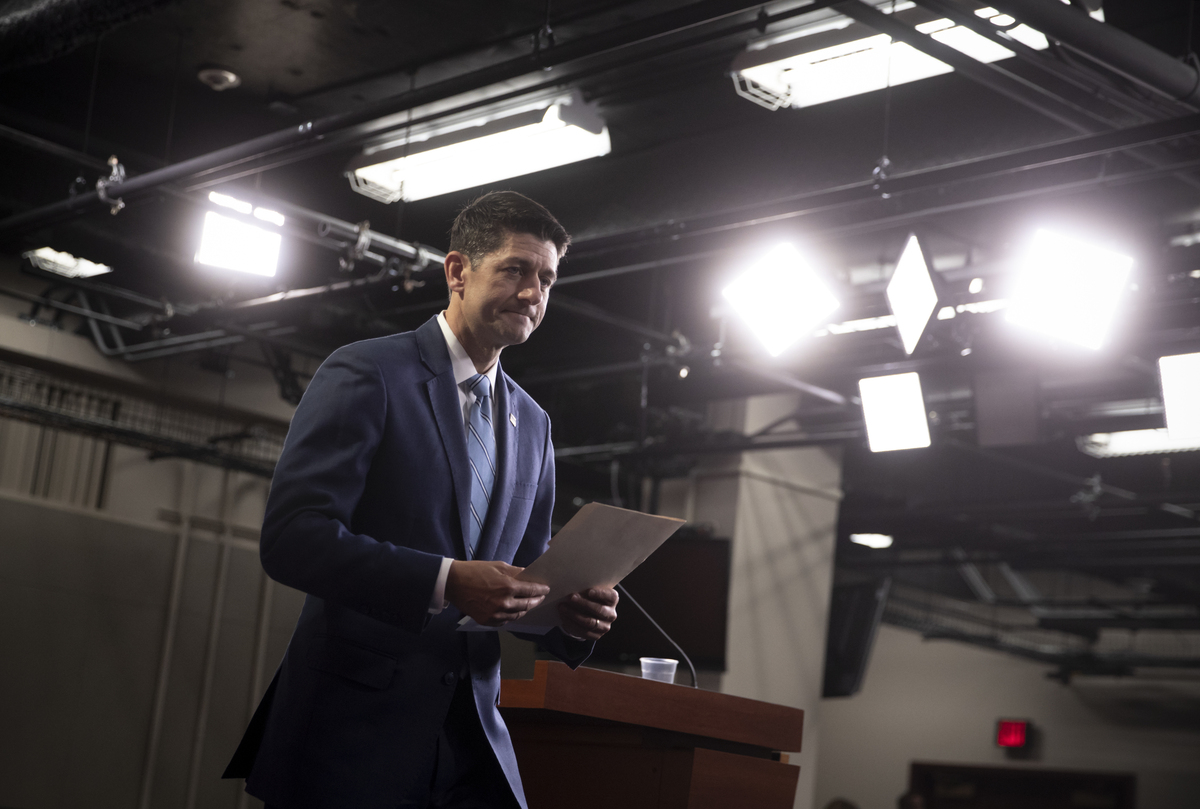 House Republicans huddled for hours Thursday morning in another attempt to find party unity on an issue that divides the GOP like no other: immigration.

The meeting concluded with little tangible progress toward a final bill, but Speaker Paul Ryan told reporters there was agreement within the House GOP that they would continue to work on a bill that addressed "four pillars" of immigration policy outlined earlier this year by the White House. Ryan said that is "the most optimistic, plausible chance of getting [a bill] into law."

The four pillars include a path to citizenship for undocumented immigrants brought to the U.S. as children, commonly known as DREAMers; border security; ending the diversity visa program; and putting new restrictions on laws regarding family-based legal immigration. "What we've all agreed is the four pillars is a really good point to rally around," Ryan said.

Legislation to that end failed to pass the Senate earlier this year, so it's unclear how the House strategy would result in a bill that could become a law. "We don't spend our time thinking about votes in the Senate," Ryan said, when asked about such a bill's long-term prospects in Congress.

In recent weeks, uprisings from the party's conservative and moderate wings forced Republican leaders led by Ryan to agree to turn the floor over to an immigration debate the third week of June, but what the House will vote on remains a mystery.

The party is divided over two very different approaches to immigration. Conservatives have been agitating for months for a vote on hard-line immigration legislation authored by House Judiciary Chairman Bob Goodlatte, R-Va. GOP leaders never brought the bill up for a vote because they say it doesn't have the support to pass the House.

House Freedom Caucus Chairman Mark Meadows, R-N.C., said his group of conservatives wants to ensure the House votes on something similar to the Goodlatte bill that adheres to the White House framework.

"What I envision the leadership doing is taking all of the feedback and crafting something," Meadows told reporters after the meeting. "What it comes down to is the citizenship question and how you deal with that."

At the same time, frustrated moderate Republicans — many of whom represent the battleground districts that will determine control of the House this November — began working with Democrats last month on a discharge petition to force a vote on the floor.

A discharge petition is a legislative act of rebellion that can overrule party leaders by forcing House votes on a bill if 218 lawmakers sign the petition. The measure is rarely successful because it requires at least some members of the majority party to rebel against their own leaders.

GOP leaders strongly oppose the discharge petition, but signatures keep getting added to it. As of Thursday morning, supporters were just three votes shy of the 218 they need. Ryan said he was confident Thursday's meeting put the brakes on the petition effort as Republicans work toward legislative compromise. He said Republicans are working to "exhaust possibilities" to avoid a discharge petition, but he did not rule out that it could still happen. "Obviously, time is of the essence," he said.

Retiring Rep. Joe Barton, R-Texas, has not signed the petition, but he warned that the effort to gather signatures is on a fast track, a process that will only speed up if leadership fails to produce a bill.

"If we don't agree pretty quickly you'll get two or three more signatures on the discharge petition and one of those four bills will go to the Senate and it will probably be one of the more liberal bills," Barton told reporters. "I would vote for that because I think some solution is better than no solution. But I'm one of 20 or 30 Republicans who would."

A moderate solution could pass only if a majority of Democrats signed on to the bill. That could potentially pass the Senate, but only if Senate Majority Leader Mitch McConnell, R-Ky., agrees to allow it to come up for a vote. And that will happen only if Trump gives a clear signal that he will sign whatever the Senate passes.

It is a complex bind that makes it highly unlikely that any immigration bill will become law as the result of these negotiations. But many supporters of the moderate bill say the emphasis on a hard-line partisan immigration solution is shortsighted.

Last month, conservatives voted down a farm bill they support on the floor as a leverage play on immigration to counter the moderates' discharge petition strategy. The farm bill now can't pass until the immigration debate is resolved.

Adding to the internal drama is the pressure on party leaders to negotiate a way out of this dispute that doesn't prompt a further rebellion in the ranks. Ryan, who is not running for re-election, has been dogged by speculation since his announcement that he might need to resign early. He wants to remain speaker through the remainder of this Congress. His top two deputies, Majority Leader Kevin McCarthy, R-Calif., and Majority Whip Steve Scalise, R-La., are angling for leadership promotions in the next Congress. How the trio navigates this immigration debate is being closely watched for what it could mean for their own political futures.

When asked if his lame-duck status has made it harder to negotiate with his rank and file, Ryan said no. "I don't think that's it at all," he said, adding that immigration is a "difficult issue" for his party and they are working to find the "sweet spot."