Accessibility links
No Driver Input Detected In Seconds Before Deadly Tesla Crash, NTSB Finds The driver of a Tesla Model X on autopilot died after it hit a barrier between a highway lane and an exit ramp. The NTSB found he didn't brake or have his hands on the wheel shortly before collision. 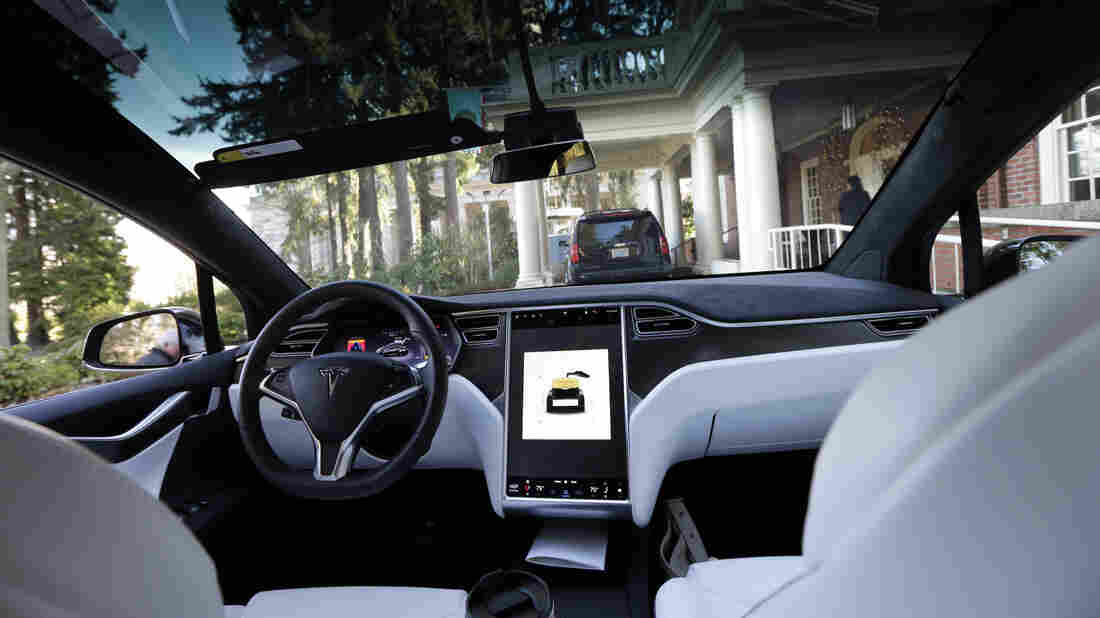 The interior of a Tesla Model X 75D semi-autonomous electric vehicle is shown in January 2017. The company's autopilot system has been engaged at the time of a number of accidents, including a crash that killed the driver in California in March, but the company emphasizes the system can't be relied on to prevent collisions. Ted S. Warren/AP hide caption 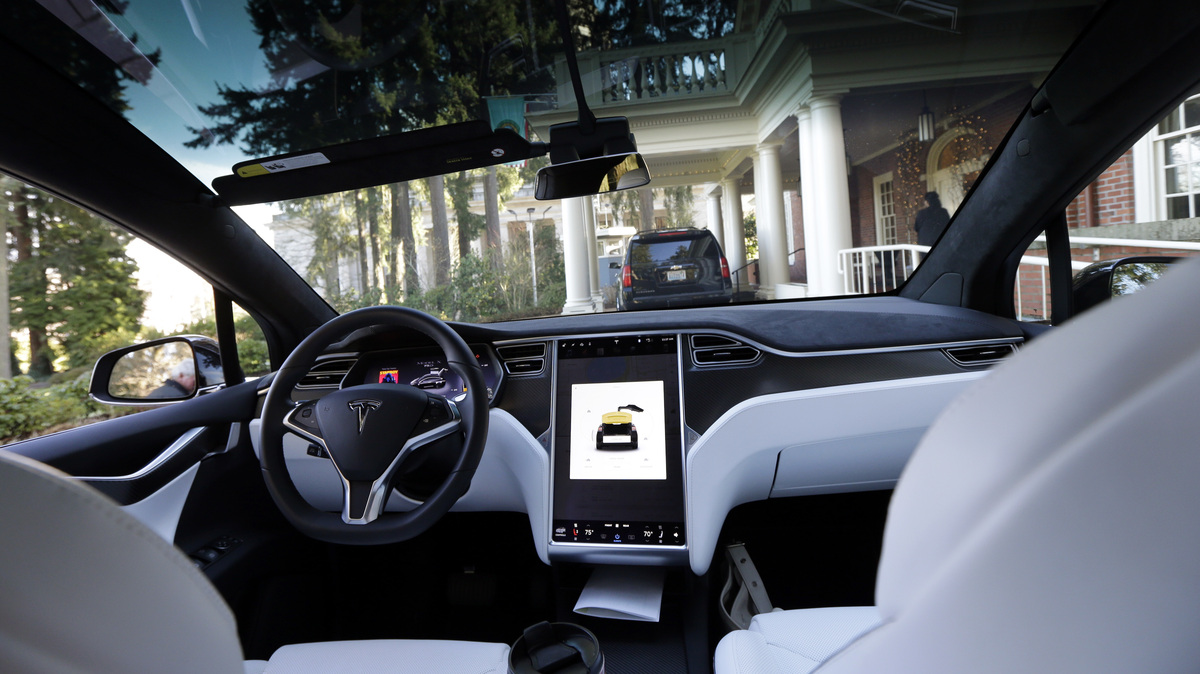 The interior of a Tesla Model X 75D semi-autonomous electric vehicle is shown in January 2017. The company's autopilot system has been engaged at the time of a number of accidents, including a crash that killed the driver in California in March, but the company emphasizes the system can't be relied on to prevent collisions.

National Transportation Safety Board investigators say the driver of a Tesla using autopilot did not have his hands on the steering wheel in the moments before a fatal crash in the Silicon Valley area of Northern California in March.

Investigators also found that the Tesla was accelerating, with the cruise control engaged, when it crashed into a highway barrier. Walter Huang, the 38-year old driver, was killed.

The NTSB's preliminary report on the crash of a Tesla Model X on U.S. Highway 101 in the bay area suburb of Mountain View, Calif., indicates that Huang had the vehicle in its semi-autonomous autopilot mode for nearly 19 minutes before the crash. That mode is designed to help keep a car in its lane and adjusts its speed based on surrounding traffic.

Huang also had the Tesla's cruise control set at 75 miles per hour, but the car was traveling slower than that because of another vehicle in front of it. But once the autopilot mode sensed that vehicle no longer was in front of the car, the Tesla began accelerating, and continued speeding up until impact near the exit to State Highway 85.

Seven seconds before impact, according to the NTSB report, the Tesla veered to the left, and "for the last 6 seconds prior to the crash, the vehicle did not detect the driver's hands on the steering wheel."

According to the report, "As the Tesla approached the paved gore area dividing the main travel lanes of US-101 from the SH-85 exit ramp, it moved to the left and entered the gore area."

NTSB: Tesla Booted From Crash Investigation For Not Following Rules

The triangular gore area is marked by white lines to show the divide between the exit ramp and the thru lanes on the highway, but the Tesla sped through the gore area and slammed head-on into a previously damaged crash attenuator at the end of a concrete median barrier, at a speed of about 71 mph. After hitting the attenuator, the Tesla hit two other cars. Passersby pulled Huang from the wreckage moments before the vehicle burst into flames, but he later died from his injuries at a hospital.

The NTSB report notes some other significant details about the vehicle and how fast it was going.

The NTSB report also indicates that not only did the driver not have his hands on the steering wheel in the final six seconds before impact, but there was "no precrash braking or evasive steering movement detected."

In the days after the crash, Huang's wife Savonne said her husband had complained about the system not working properly near the area where the crash occurred.

Questions have been raised about the Tesla autopilot system's ability to detect stopped or stationary objects in other crashes. In January, a Tesla Model S that may have been on autopilot hit a parked firetruck on Interstate 405 near Los Angeles. And last month, a Tesla Model S in autopilot mode hit a stopped fire department vehicle in Salt Lake City. The driver in the second incident told authorities she thought Tesla's emergency braking system would stop the car to avert a collision.

According to the Associated Press, Tesla says its vehicles and systems are not to blame; the drivers are.

A Tesla spokeswoman pointed to passages in the company's owner's manual that warn that automatic emergency braking may not work all the time, and won't save the driver from an accident.

"It is the driver's responsibility to drive safely and remain in control of the vehicle at all times," the manual says. "Never depend on Automatic Emergency Braking to avoid or reduce the impact of a collision."

Shortly after the March 23 crash that killed Huang, Tesla released a statement that said "the only way for this accident to have occurred is if Mr. Huang was not paying attention to the road."

The preliminary NTSB report released today does not assign blame for the crash, and officials say it may take a year or longer to determine the probable cause.

NTSB spokesman Christopher O'Neil told the AP Thursday that, among other factors, investigators are trying to determine how the car's camera, radar and ultrasonic sensors were working and what they were tracking.

"The focus isn't Tesla's technology," he said. "The focus is on what led to this crash and how do we prevent it from happening again."