Accessibility links
Trump's Tariffs Worry A Small Steel City In Pennsylvania A Russian-owned steel mill in Mercer County, Pa., is seeking an exemption from the tariffs. Some workers at the mill backed Trump but now fear their jobs could be in jeopardy because of his policies. 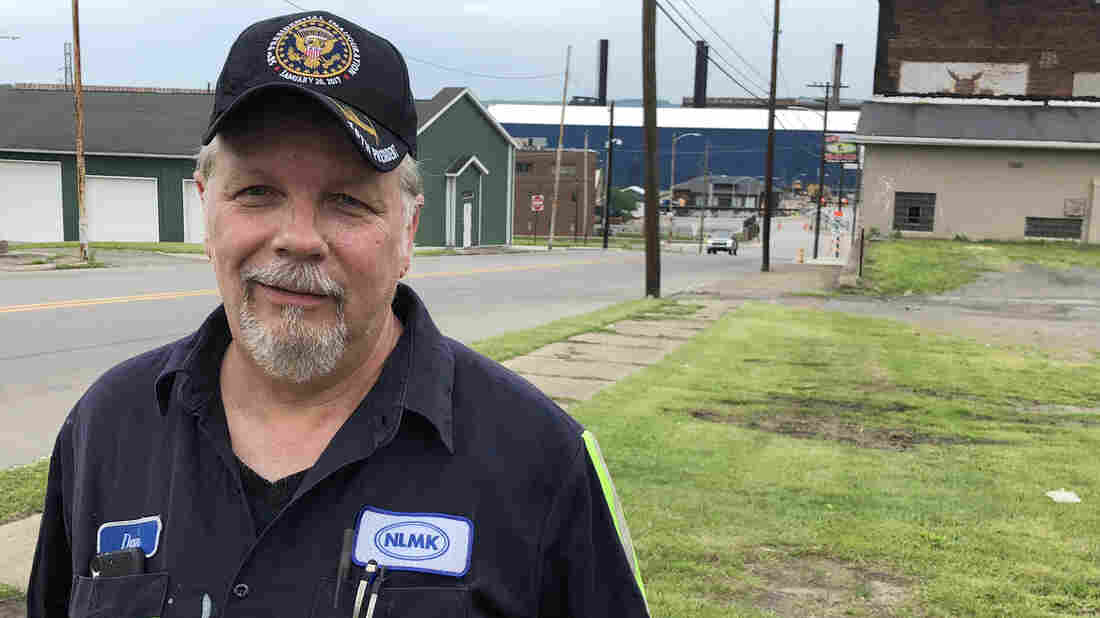 Dan Moore voted for President Trump and says he does not regret his vote even though his job may be in limbo because of the steel tariffs. Asma Khalid/ NPR hide caption 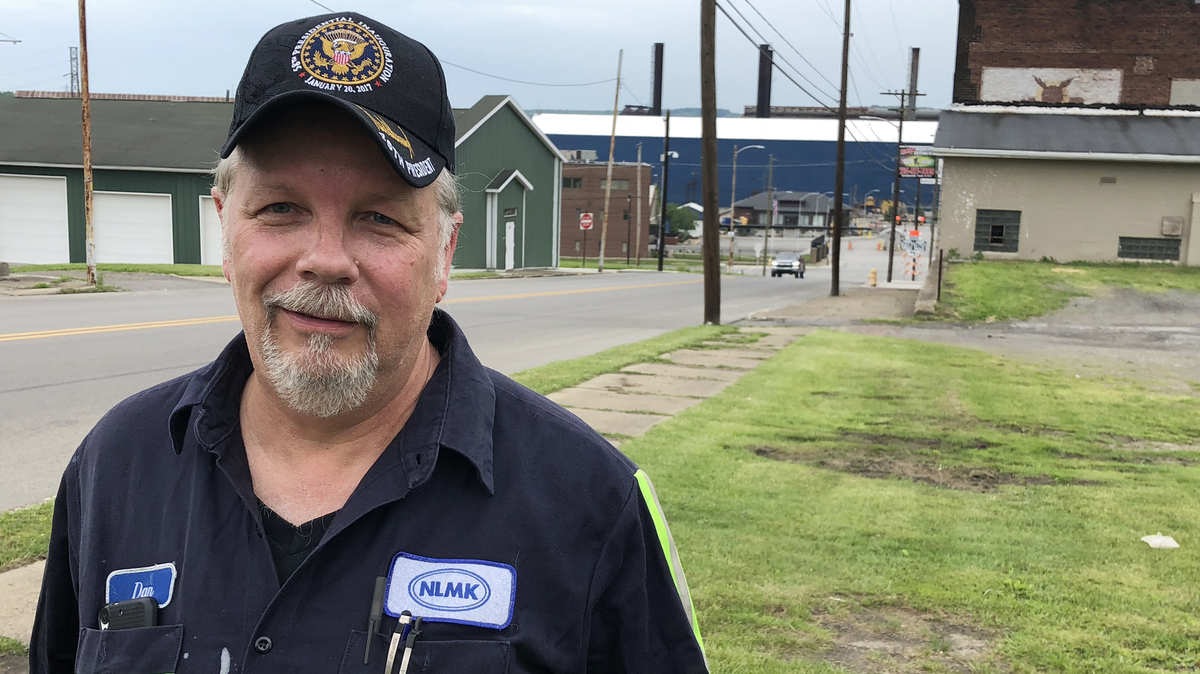 Dan Moore voted for President Trump and says he does not regret his vote even though his job may be in limbo because of the steel tariffs.

Dan Moore, a 58-year-old steel mill worker, gives the president an A+ on everything from tax cuts to foreign policy, but he is not so sure about tariffs.

"We need tariffs, but when it starts to impact the company where you work ... you're thinking, well wait a minute, time out!" he said.

Moore is worried the tariffs might cost him his job. The mill where he works, NLMK Pennsylvania, in the town of Farrell, not far from the border with Ohio, employs 750 workers and is a subsidiary of Novolipetsk Steel, or NLMK, Russia's top steelmaker.

But even though NLMK is creating American jobs, the company is being hit with a 25 percent tariff on steel because it imports raw steel slabs from Russia before turning them into coils in Pennsylvania and then selling that steel to customers that manufacture cars or pipes, for example.

Bill Almashy, a 48-year-old crane operator at the mill, worries that NLMK might not be able to survive the tariffs.

He knows what it is like to lose a steel mill job. This is the third mill he has worked at in recent years. One of the previous mills went bankrupt; the other moved most of its jobs to Mexico. Along the way, Almashy lost his home, his pension and his 401(k).

"A lot of steel in America is gone," he said. " Basically our politicians failed us."

And so when he first heard about President Trump's tariffs, he "applauded" the president. He says he still does but doesn't understand why his company should be punished for importing steel.

"Even if they're foreign-owned, but they have a factory in this country and they're employing American workers, to me, that's an American company," Almashy said.

To him, exempting this Russian-owned steel mill from tariffs would be a matter of putting "America First."

And that's the crux of the debate. 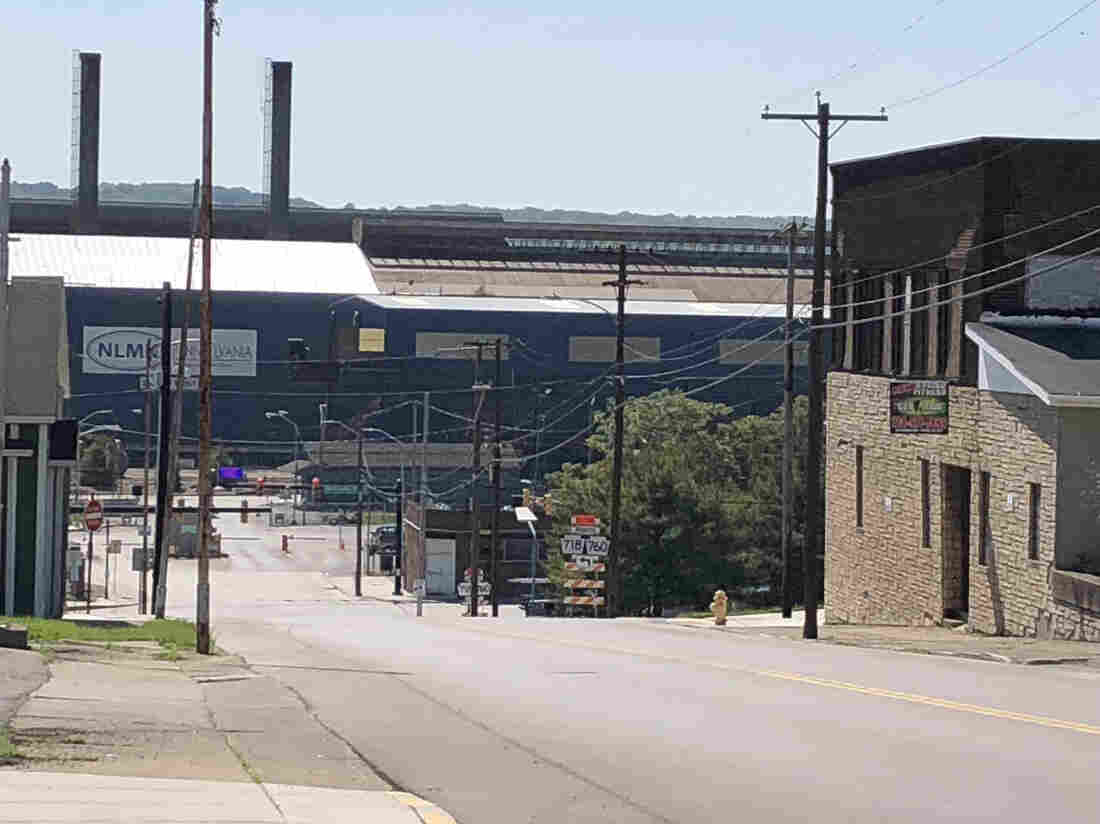 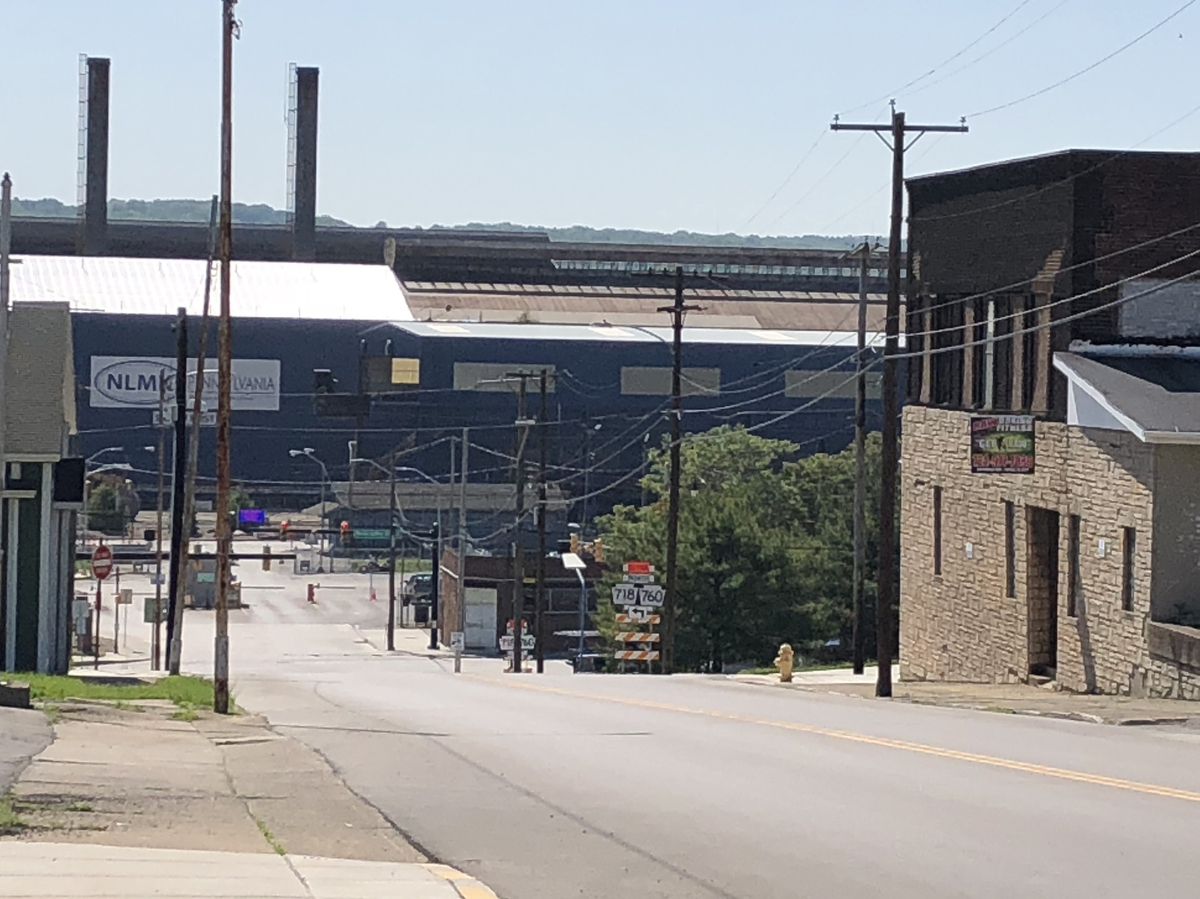 NLMK Pennsylvania employs around 750 workers in Farrell, a tiny town in Mercer County, Pa., where President Trump captured 61 percent of the vote in 2016.

Moore voted for Barack Obama in 2008 and 2012, but during the last presidential election, he became enamored with Donald Trump's promise to bring back jobs and renegotiate trade deals. He thought tariffs in the abstract would be beneficial, but now that they could hurt the company he works for, he thinks the Trump administration needs to re-evaluate the idea.

"Tariffs — they may help some people, but they're gonna hurt a lot of people too. I don't know exactly how you balance that," Moore said. "Maybe it's not the right time for tariffs." Maybe, he says, the president ought to focus more on wages and jobs instead.

Moore is about to head into the mill down the road for his shift. He is wearing a dark blue work uniform shirt over his round belly and a Trump hat over his graying hair. It's a souvenir he picked up during Trump's inauguration.

Moore insists he has "no regrets" about his vote, even though he knows some might think that's strange given the precariousness of his current employment due to the very tariffs Trump introduced.

"President Trump was the better candidate," he says flatly.

Plus, he thinks the president is receptive to feedback.

"I have plans to write a letter to President Trump or maybe a personal phone call," Moore said. He believes that if he can get the president's ear, he might be able to persuade him to give NLMK an exemption for the 3 million tons of semi-finished steel slabs it wants to import from Russia. 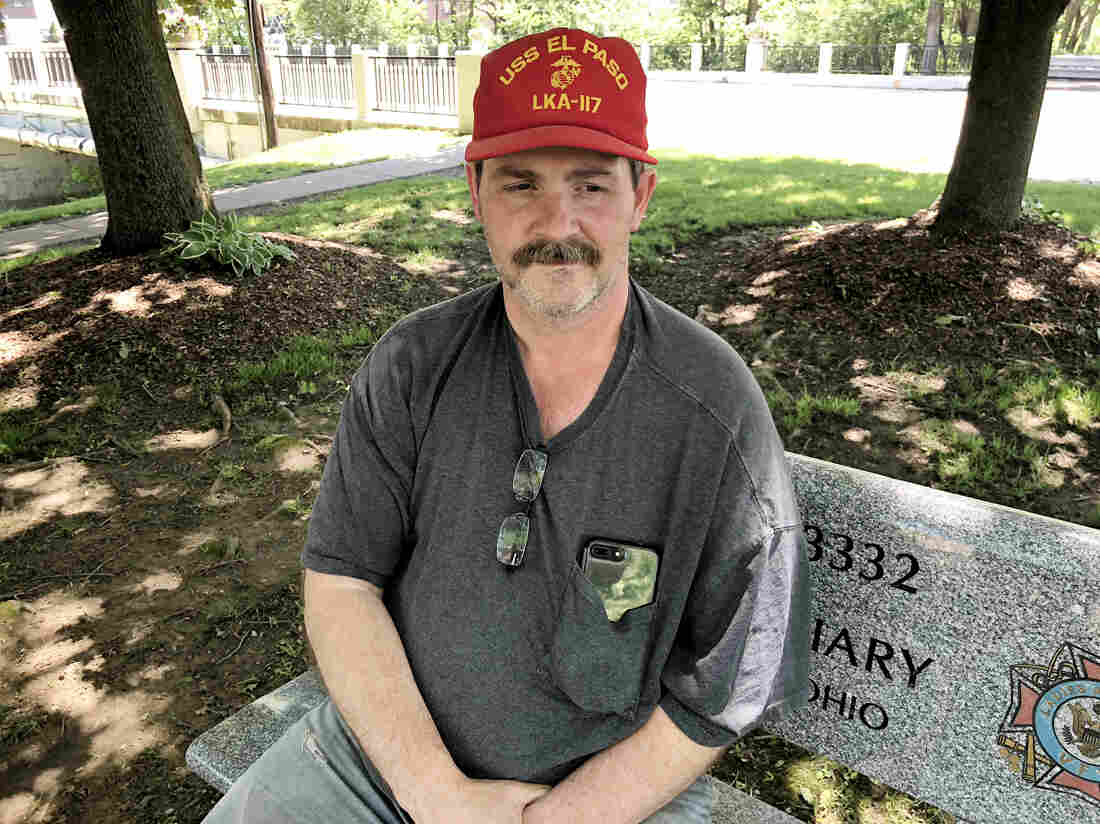 Bill Almashy says when he first heard about President Trump's tariffs he liked the idea. He still does, but he doesn't understand why the company he works for should be punished for importing steel. Asma Khalid/NPR hide caption 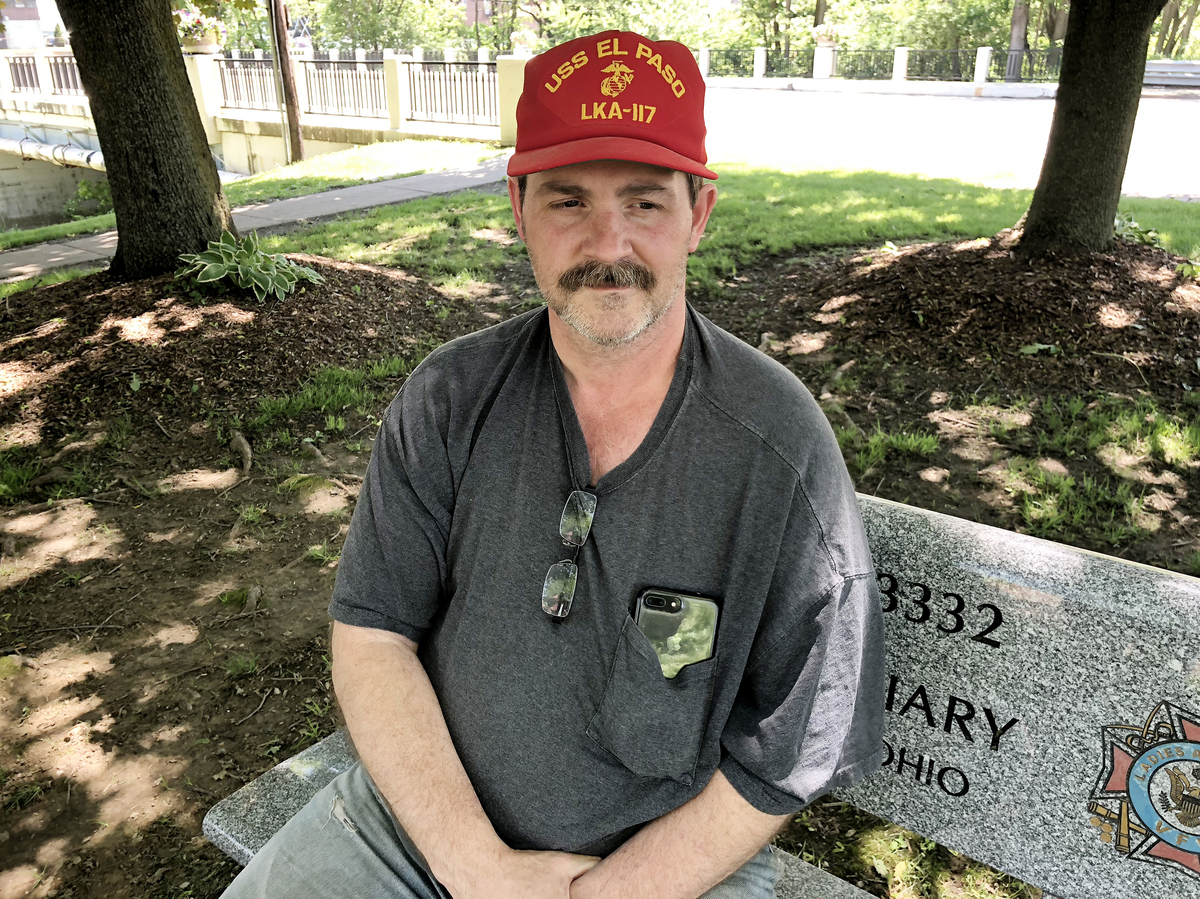 Bill Almashy says when he first heard about President Trump's tariffs he liked the idea. He still does, but he doesn't understand why the company he works for should be punished for importing steel.

NLMK, which also has a mill in Indiana, applied for an official exemption from the tariffs with the Department of Commerce in March, arguing that it cannot find enough domestic steel slabs to purchase.

But that application is still pending. The Commerce Department has said the review process should take roughly 90 days and it will consider requests for exclusions of "certain products determined not to be produced in the United States in a sufficient and reasonably available amount."

Critics say NLMK is exaggerating its supply problem because it wants to continue buying slabs at a steep discount from its parent company in Russia, whose majority shareholder Vladimir Lisin is the wealthiest person in that country. In a statement to NPR, the company did not comment on Lisin but strongly denied it is trying to buy "cheap foreign slabs."

"I hate to say it, but in a lot of ways NLMK is the boy who cried wolf," said Scott Paul, president of the Alliance for American Manufacturing, a group that has been supportive of the president's steel tariffs. Paul is skeptical that NLMK would actually close its Pennsylvania (or Indiana) mill because of the steel tariffs. "A lot of companies will need to make adjustments ... finding new domestic suppliers," he said.

Paul says right now there may not be enough domestic steel slabs available for purchase, but that will change because of the tariffs.

The Commerce Department will ultimately decide who is right.

But some people in Farrell cringe at the possibility of Washington, D.C., determining their fate.

Michael Ceci, Farrell's city manager, says tariffs are "an abomination" for his community.

Outside his office, dilapidated homes and boarded-up storefronts line the broken brick roads of this once booming steel city in Western Pennsylvania. In the busy days, Carnegie Steel housed multiple blast furnaces that melted hundreds of tons of steel a year. Most of that is just a faded memory these days.

Farrell has gotten rusty. It has struggled financially in recent decades, though Ceci says the city was finally doing a bit better because of NLMK.

"We've gotten high-paying jobs at this mill, it's really helping and now you're gonna change the rules again and make us start over again?" he asked. "Because of decisions made at the national level by politicians who are not in touch with what's happening on the ground with the people who live here."

Ceci says a quarter of the city's $3 million general fund comes directly from NLMK through property taxes and income taxes, and if it were to shut down, it would crush the city financially.

"I would not figuratively but literally leave the keys on the desk, the lights will get turned off when the power doesn't get paid. And that's it," he said, dangling his office keys and dropping them on his desk for emphasis. "The state could come in and run [the city] because the revenue would not be here to provide the basic services." 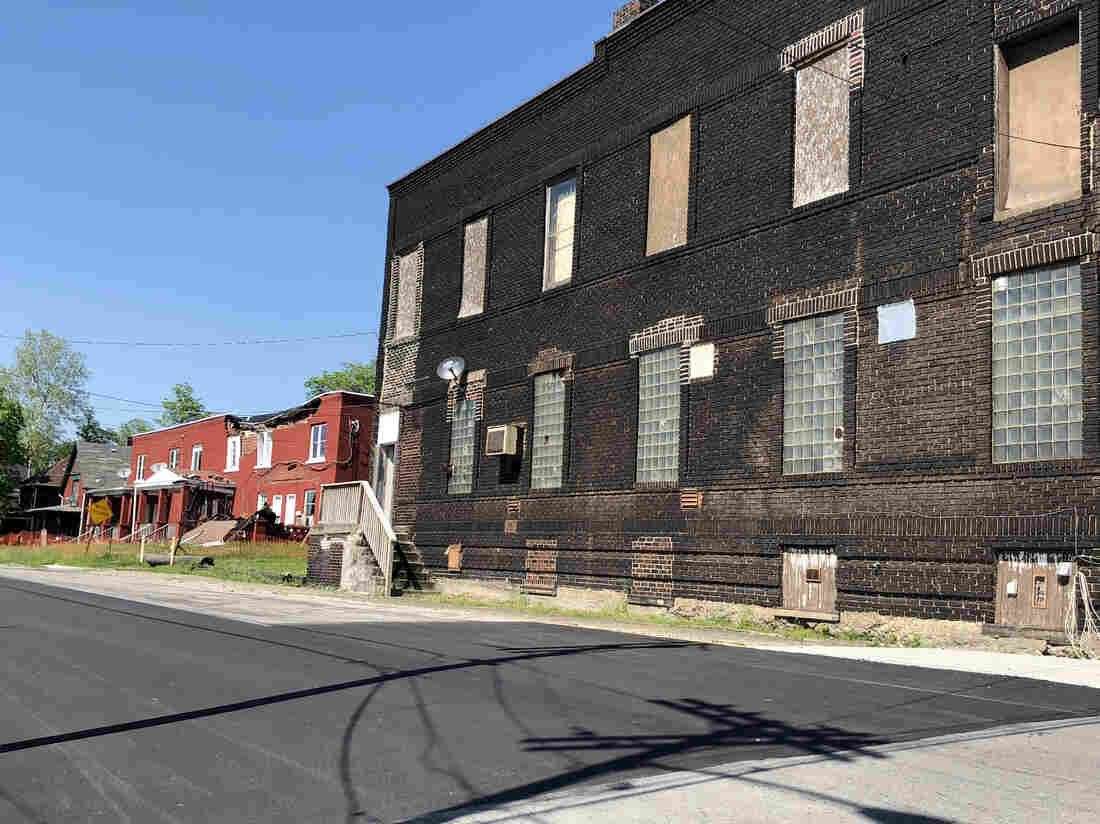 The population of Farrell, Pa., has been in a steady decline for years. These days fewer than 5,000 people live in the once-grand steel city. Asma Khalid /NPR hide caption 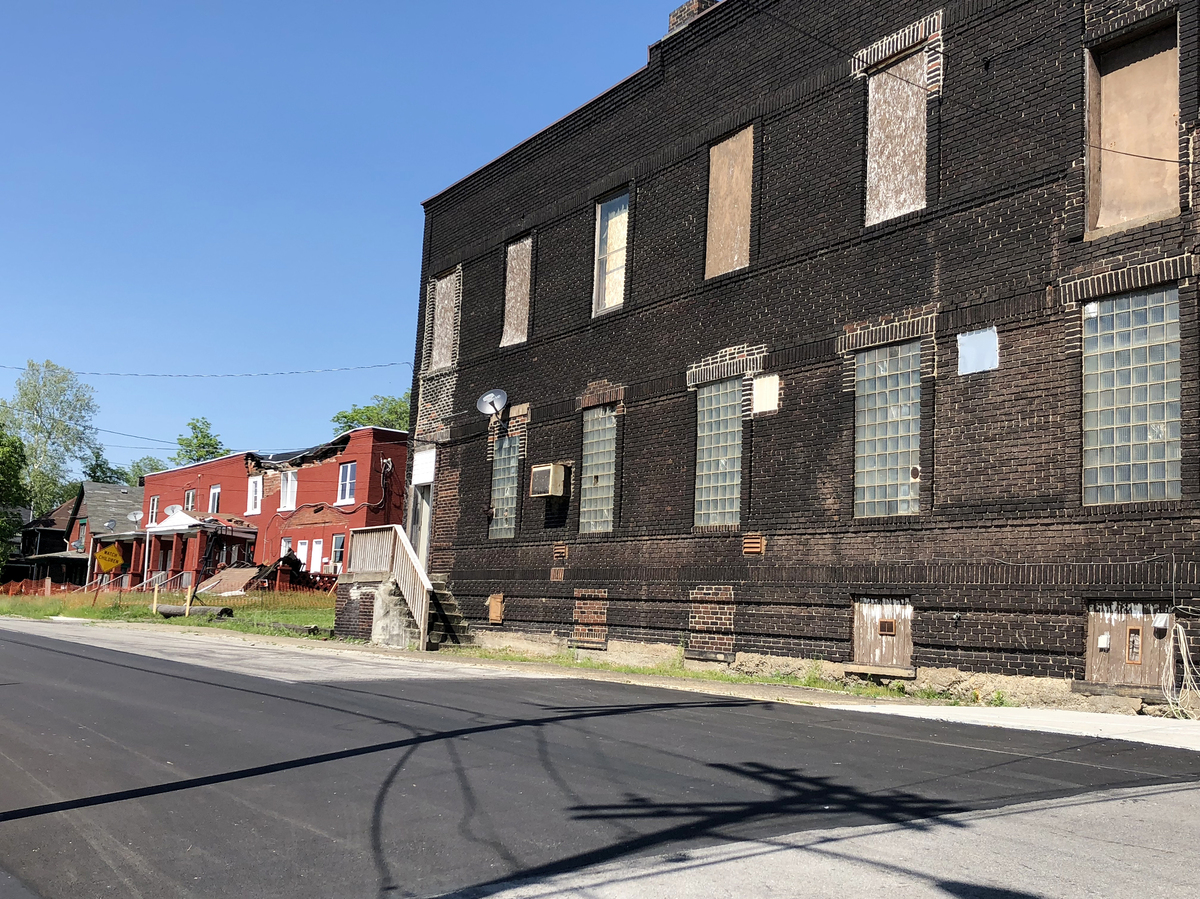 The population of Farrell, Pa., has been in a steady decline for years. These days fewer than 5,000 people live in the once-grand steel city.

Locals mostly agree that Americans have been hurt by unfair global trade, but they also plead against tariffs on their local mill.

Loren Holler, drinking a Budweiser with his wife at the bar in Farrell's VFW hall, is one of the few contrarians.

He says if NLMK goes out of business it'll hurt a lot of people, but he still thinks the benefits of the steel tariffs nationwide outweigh the economic damage his individual community will face.

"I think tariffs are good," said Holler. "You can't cry wolf because you've been robbing the bank."

But for Moore, it's hard to think about the overall national benefits, because he is worried about his own future. He hopes he doesn't get laid off. At 58, he is not sure where else he would go.

"Every day I have to try to stay focused on the job, but you have that question in your mind — how much longer do I have before I get my pink slip?" he said.