Accessibility links
Trump Likely To Get Chilly Reception At G-7 As Allies Bristle At U.S. Moves President Trump's G-7 trip will take place as tensions rise between the United States and some of its closest allies, including French President Emmanuel Macron. 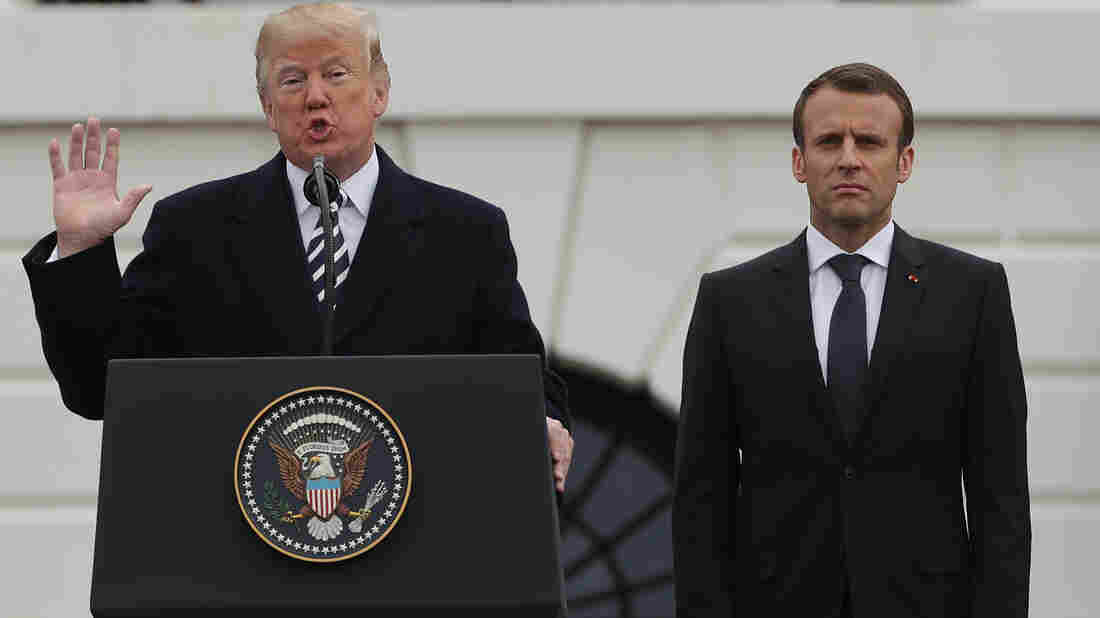 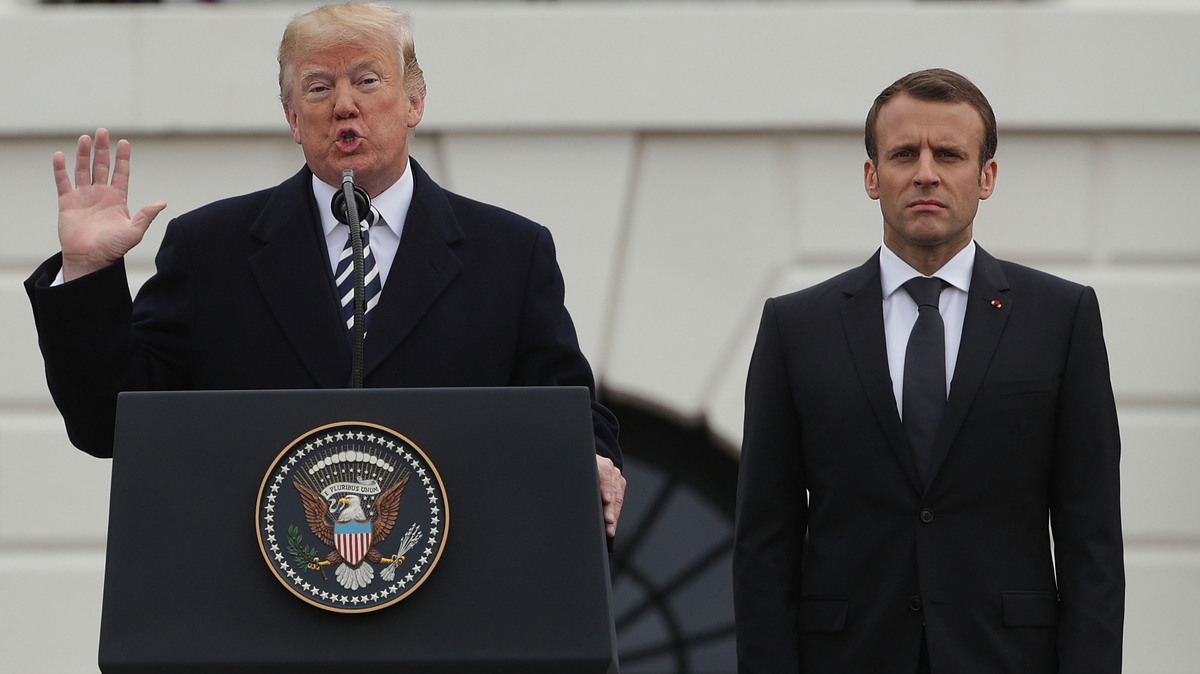 President Trump and French President Emmanuel Macron participate in a state arrival ceremony at the South Lawn of the White House on April 24.

President Trump is heading to Canada for the G-7 summit on Friday. The weather is expected to be mild, but he is likely to get a frosty reception from the other world leaders in the group.

Ahead of Trump's arrival, French President Emmanuel Macron tweeted suggesting the international Group of Seven could issue a communique at the end of the summit that leaves out the United States. "The American President may not mind being isolated, but neither do we mind signing a 6 country agreement if need be," Macron wrote.

The American President may not mind being isolated, but neither do we mind signing a 6 country agreement if need be. Because these 6 countries represent values, they represent an economic market which has the weight of history behind it and which is now a true international force https://t.co/UA86fcjozs

Not to be outdone, Trump responded on Twitter saying that both Macron and Canadian Prime Minister Justin Trudeau "are charging the U.S. massive tariffs and create non-monetary barriers."

Please tell Prime Minister Trudeau and President Macron that they are charging the U.S. massive tariffs and create non-monetary barriers. The EU trade surplus with the U.S. is $151 Billion, and Canada keeps our farmers and others out. Look forward to seeing them tomorrow.

In a second tweet Thursday evening, Trump said Trudeau "is being so indignant, bringing up the relationship that the U.S. and Canada had over the many years and all sorts of other things..."

Prime Minister Trudeau is being so indignant, bringing up the relationship that the U.S. and Canada had over the many years and all sorts of other things...but he doesn’t bring up the fact that they charge us up to 300% on dairy — hurting our Farmers, killing our Agriculture!

Tensions between the U.S. and its allies have increased in recent weeks after a series of White House decisions have frustrated some of the United States' closest international partners.

This is not the first time that relations have been strained, but the depth of the current disagreements may have lasting consequences.

Trump pulled out of the Iran nuclear deal after German Chancellor Angela Merkel and Macron both visited the White House and appealed to Trump not to completely withdraw from the agreement.

Then last week, the Trump administration imposed tariffs on steel and aluminum from the European Union, Mexico and Canada, sparking anger and threats of retaliation from those allies.

Canada, in particular, has taken offense at the notion that the steel tariffs are justified on the basis of national security concerns.

At the summit in Charlevoix, Quebec, Trump will hold bilateral meetings with Macron and Trudeau, in addition to attending working sessions with all of the G-7 leaders.

"America stands very much alone as they enter this G-7," Heather Conley, director of the Europe program for the Center for Strategic and International Studies, told reporters on a press call.

The White House has downplayed reports of tensions between the leaders, but stressed that the president is committed to overhauling trade practices.

"I regard this as much like a family quarrel. I'm always the optimist. I believe it can be worked out," top White House economic adviser Larry Kudlow told reporters on Wednesday. 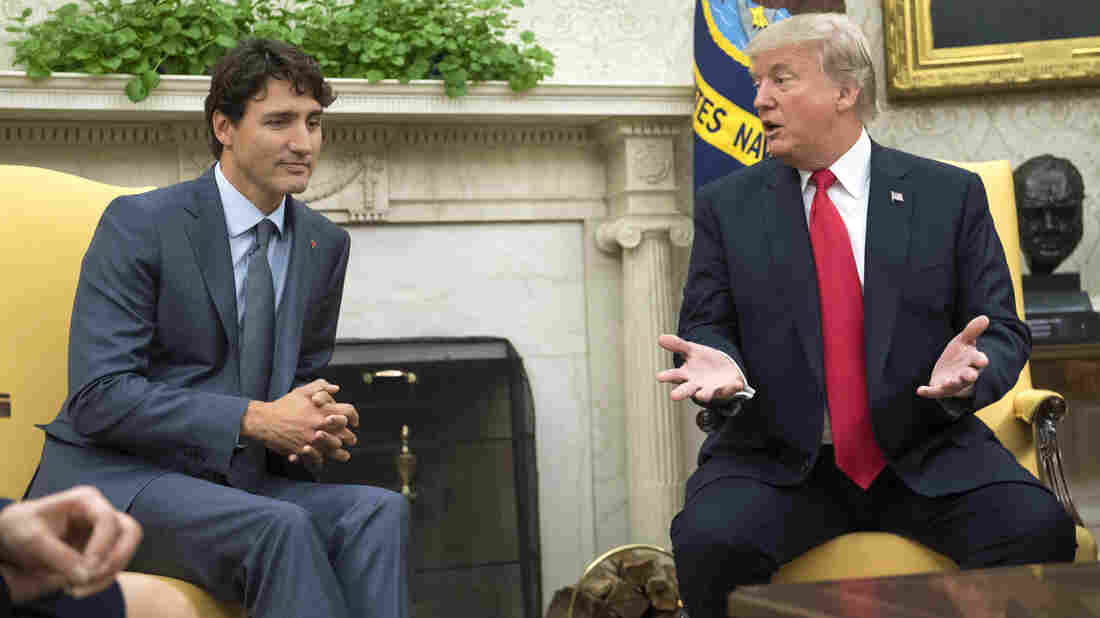 President Trump speaks alongside Canadian Prime Minister Justin Trudeau during a meeting in the Oval Office at the White House in October. Pool/Getty Images hide caption 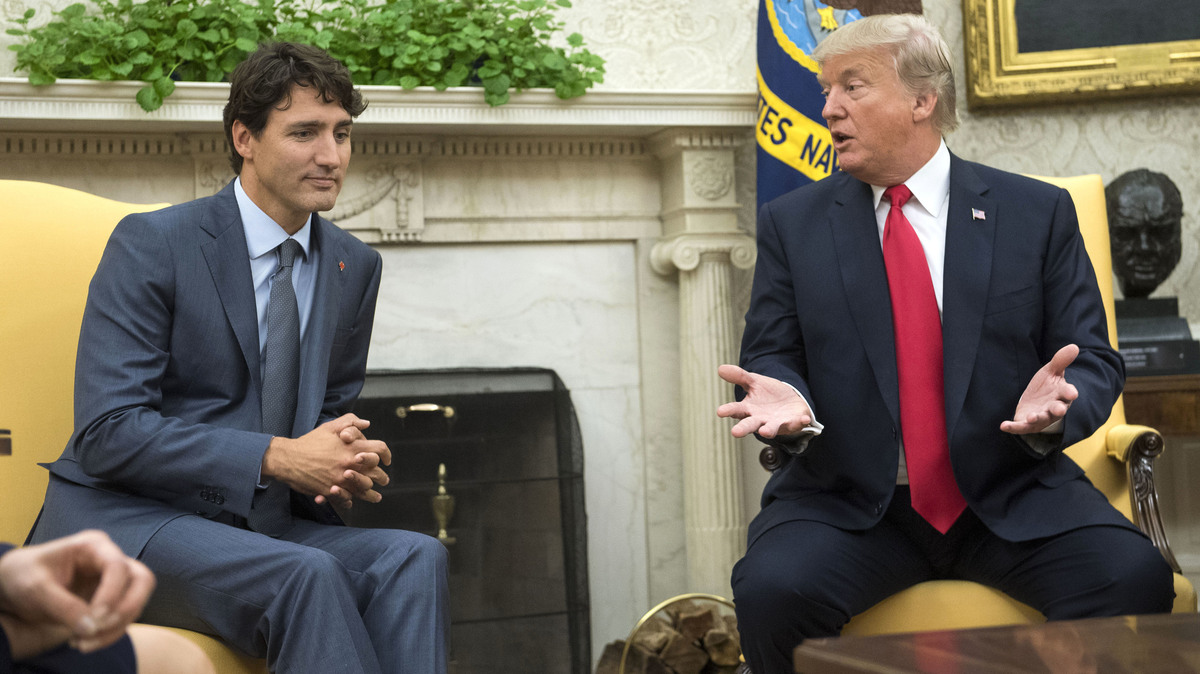 President Trump speaks alongside Canadian Prime Minister Justin Trudeau during a meeting in the Oval Office at the White House in October.

In the past, the U.S. has had low points with Europe. In the lead-up to the Iraq War in 2003, the U.S. was at odds with France and Germany, as the two European countries worked in opposition to the war. At the time there was even a symbolic call by critics to change french fries to "freedom fries" in the United States.

While there have been disputes over policy, analysts say the current dust-ups between the Trump administration and longtime U.S. allies point to a potential shift in international dynamics.

"There's never really been a fundamental question about commitment to the postwar international economic order," Thomas Wright, a senior fellow at the Brookings Institution, told reporters on a call about the summit. "That's really what's in question today."

The divides between the countries are wide. There are differences in styles of diplomacy and views about cooperation and free trade.

At the start of Trump's presidency, many foreign leaders worked to develop cordial relationships with him, hoping that it would help to make Trump more willing to compromise on some of his more contentious campaign promises.

"There is a feeling, I think, over the last few months that that approach has not borne fruit, and that they haven't really gotten anything for that friendly approach," Wright said.

While it is unlikely that leaders will be openly hostile to Trump, they may be a little more direct in their criticism of the United States.

Already at the meeting of the finance ministers ahead of the G-7, the six non-U.S. countries released a statement raising concerns about U.S. trade actions.

The U.S. and the rest of the G-7 countries — Britain, Canada, France, Germany, Italy and Japan — depend on each other for security and as economic partners, so the governments will have incentives to find some common ground.

But there is some risk that comes along with the discord.

"One risk is that others will take advantage of this apparent vacuum in American leadership and the lack of trans-Atlantic consensus and act in ways that will harm trans-Atlantic interests, whether it's Russia in the Eurasia ... or China in Asia," said Ian Lesser, of the German Marshall Fund.