Accessibility links
Bernie Sanders Is Losing Primary Battles, But Winning A War While many of Vermont Sen. Bernie Sanders' preferred candidates are faltering in Democratic primaries in 2018, the Sanders agenda continues transforming the Democratic Party. 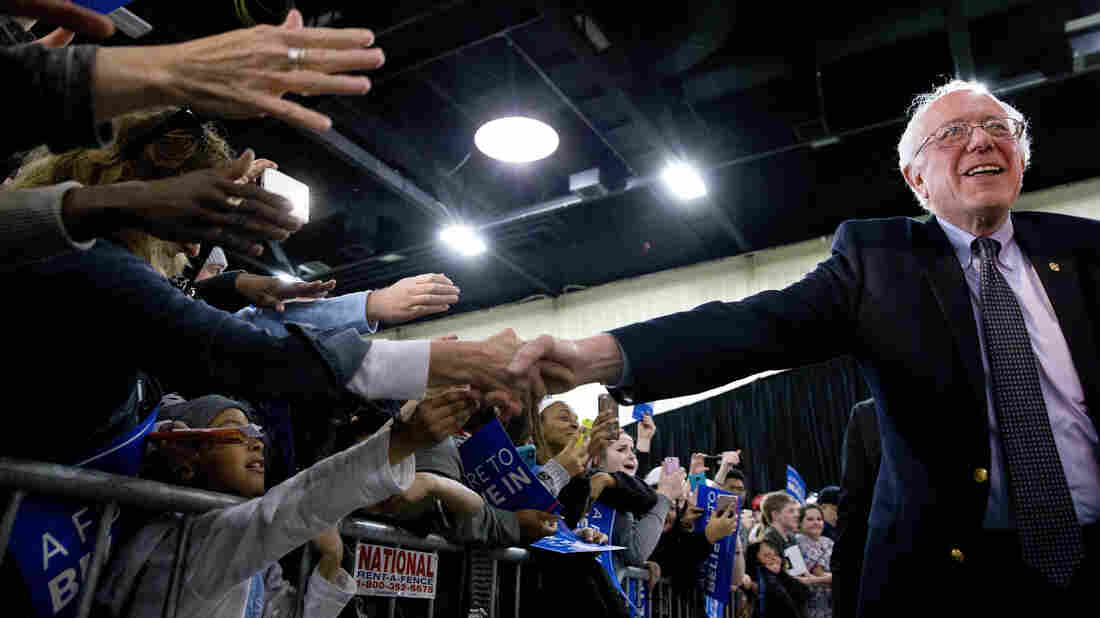 Sen. Bernie Sanders, I-Vt., greets the crowd as he arrives for a campaign rally in Tulsa, Okla., in 2016, when he built a large political movement during his bid for the Democratic presidential nomination. Many in the party have adopted parts of his agenda, even though candidates he backs mostly have lost in 2018. Jacquelyn Martin/AP hide caption 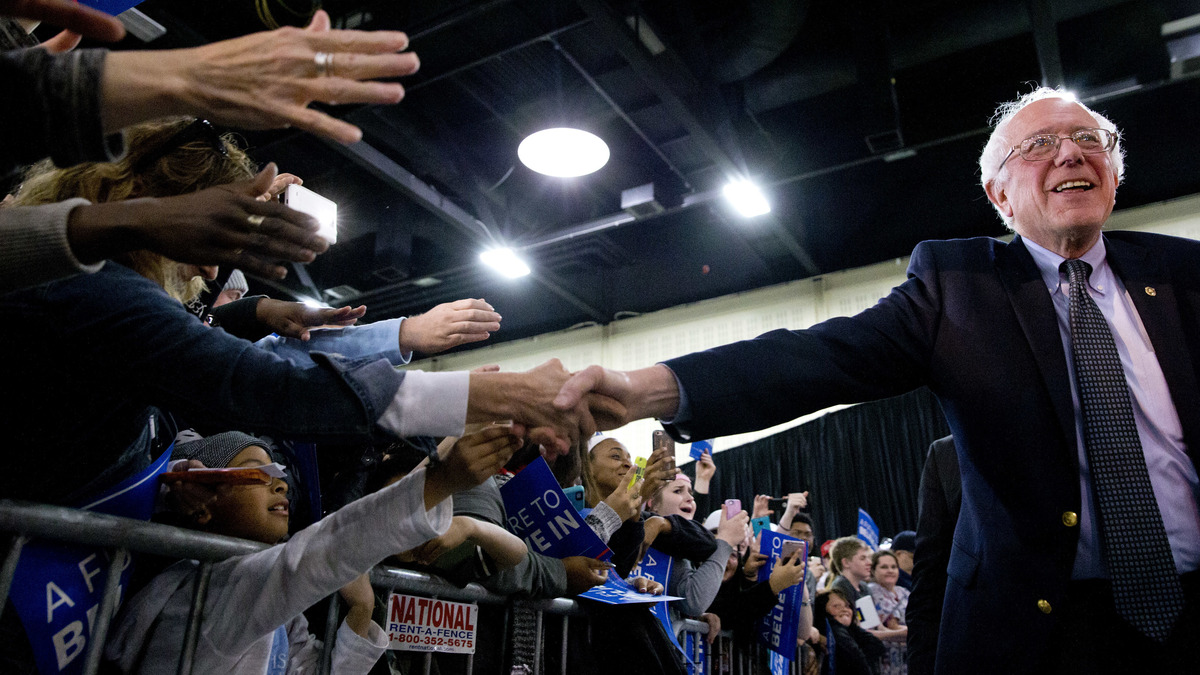 Sen. Bernie Sanders, I-Vt., greets the crowd as he arrives for a campaign rally in Tulsa, Okla., in 2016, when he built a large political movement during his bid for the Democratic presidential nomination. Many in the party have adopted parts of his agenda, even though candidates he backs mostly have lost in 2018.

Since most of the congressional candidates that Vermont Sen. Bernie Sanders endorsed this year are losing contested primaries, then Sanders' political clout must be fading, right?

"You know, he has a much broader look at politics than just elections," Sanders' longtime strategist Jeff Weaver said.

That is evident. The 2016 candidate repeatedly questioned the political value of his endorsements, and even expressed some mild indifference to the race-by-race results of the primaries he's waded into.

Sanders' broader goal is to get more first-time voters and first-time candidates involved in the political process, and to keep pushing progressive policies like a Medicare-for-all health care plan into the Democratic mainstream.

If that takes more than one election cycle, so be it.

"I hope they win," Sanders said. "Maybe they don't. But if you get 45 percent of the vote now, next time you may well win."

In the U.S. House primaries that have happened so far, Sanders has endorsed six candidates in contested races. Only two of his chosen House candidates have won contested primaries, and one was an incumbent: Rep. Nanette Barragán of California.

Even if many of his hand-picked candidates are coming up short, more of the Democrats who are winning are lining up closer to Sanders anyway. A Medicare-for-all, single-payer health care plan continues to gain support among Democratic candidates, and the $15 minimum wage Sanders made a key part of his presidential campaign has been adopted as a cause by party leaders across the country.

But given his broad success at reshaping the party, the question lingers as to why so many of the candidates bearing Sanders' personal seal of approval are losing.

This week, another Sanders-endorsed House candidate lost a Democratic primary by a wide margin. Pete D'Alessandro ran Sanders' Iowa campaign in 2016, which resulted in a virtual tie with Hillary Clinton. This year, the Vermont senator campaigned alongside him, cut a TV commercial for him and helped him raise money. But D'Alessandro finished in third.

"I could be 100 percent in terms of my endorsements," Sanders told NPR. "All you've got to do is endorse establishment candidates who have a whole lot of money, who are 40 points ahead in the poll. You know what, you'll come and say, 'Bernie, you were 100 percent supportive of these candidates, they all won.'"

"The candidates that we support, by and large with few exceptions, are all candidates who are taking on the establishment, and are often outspent," he added.

Sanders and Weaver argue that a race-by-race accounting isn't the best way to track what the 2016 Democratic presidential runner-up is doing this year.

"The issue here is not that I think a Bernie Sanders, or frankly the endorsement of anybody else, is some magical potion to get people elected," Sanders said. "Frankly, between you and me, I'm not sure how much endorsements – how significant they are. Sometimes they help, sometimes not much."

Two of the 17 candidates Sanders has backed this year say that, in their minds, there's no question the endorsement helped.

"It did a lot of good for our campaign," said Greg Edwards, who ran in a crowded Pennsylvania House primary last month. "It increased my name ID, helped me get volunteers, helped with fundraising, certainly. And we got a lot of media attention out of it. I think we got four or five press hits."

Still, Edwards also ended up third in his race.

But Edwards centered his campaign around policies many voters now associate with Sanders. "Universal health care, Medicare-for-all, around universal preschool, around debt-free college. Around increasing the minimum wage from $7.25 to $15," he said.

When Sanders introduced his latest single-payer health care bill last year, it was quickly endorsed by several of the Senate Democrats mentioned as possible 2020 presidential candidates.

Braddock, Pa., Mayor John Fetterman was running on many of those issues two years ago, when he entered Pennsylvania's Democratic U.S. Senate primary against two better-funded candidates.

Fetterman had hoped for a Sanders endorsement that year, but didn't get it. Fetterman finished third in that 2016 race.

The call finally came two years later, when Fetterman was running for lieutenant governor in a crowded field that included an incumbent. "I don't care who you are, but you know when somebody says, 'Please hold for Senator Sanders,' and then you hear his voice on the line say, 'Hi John', you're like, 'Oh my gosh!'"

"What I ran on in 2016, that didn't change in 2018," said Fetterman, who won last month's primary. But now, many other Democratic candidates share those views, too.

"A Democrat can't be elected nationally if he or she doesn't embrace his idea of Medicare-for-all, I fundamentally believe that," said Fetterman. "And at the heart of that, that's what Sen. Sanders has always championed."