Accessibility links
Trump Wants Russia Back In G-7 As he departed the White House for Canada and this weekend's summit of leading economic powers, President Trump said Moscow should be readmitted to the club. 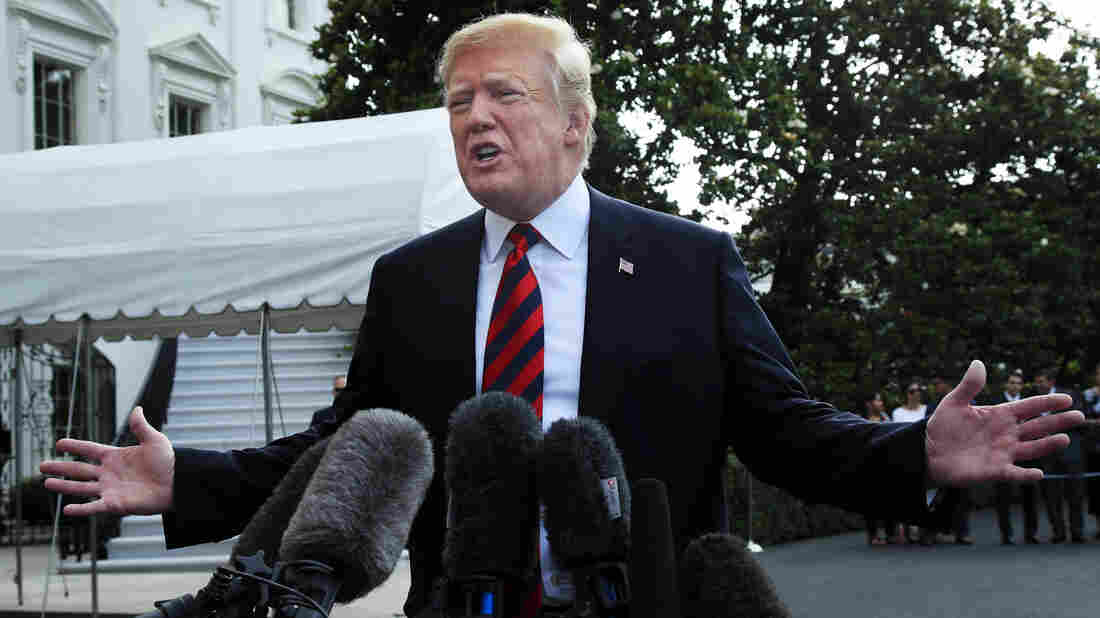 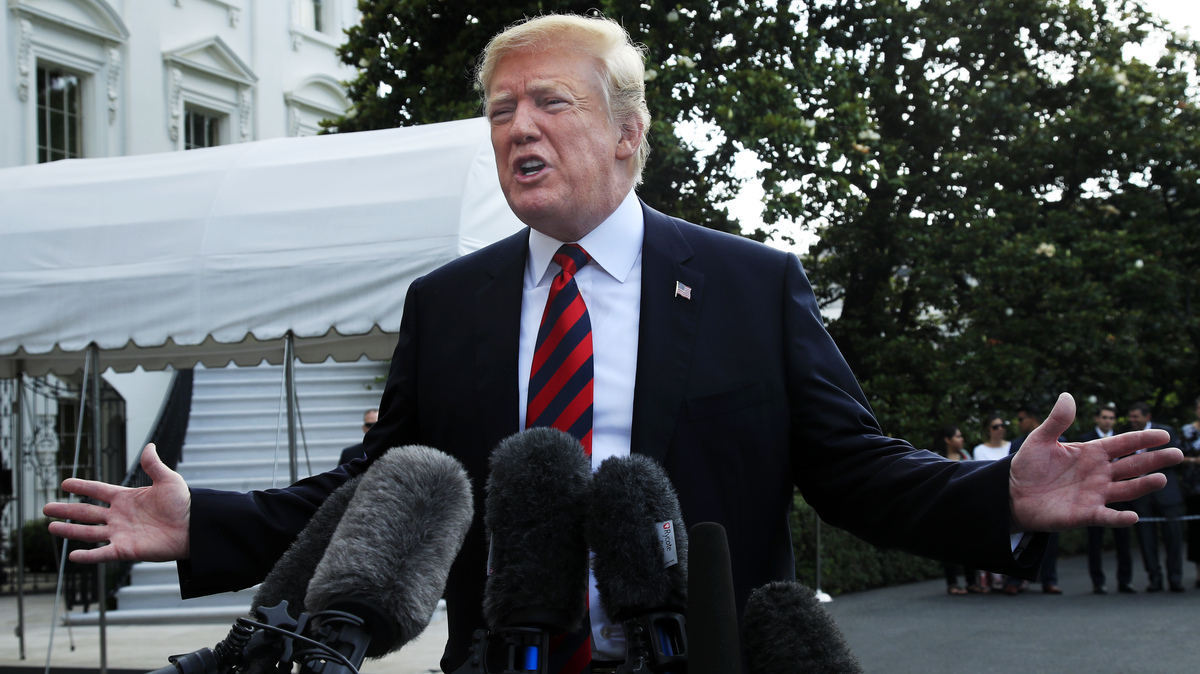 President Trump speaks to reporters before leaving the White House on Friday to attend the G-7 Summit in Charlevoix, Quebec.

President Trump is calling on the Group of 7 to readmit Russia to the group of leading economic powers, saying "we should have Russia at the negotiating table."

Moscow was kicked out of the group, then the G-8, four years ago after it annexed Crimea. It had been invited to join the group in the 1990s after the collapse of the Soviet Union. But after Russia's intervention in Ukraine and annexation of Crimea, Western leaders sought to isolate Vladimir Putin's government.

The G-7 is made up of the U.S. and allies Britain, Canada, France, Germany, Italy and Japan.

Trump, talking to reporters as he left the White House for this weekend's G-7 summit in Charlevoix, Quebec, asked, "Why are we having a meeting without Russia being in the meeting?" He went on: "Whether you like it or not, and it may not be politically correct, we have a world to run."

It's the latest in a number of friendly gestures Trump has made toward Putin, and Russia, which U.S. intelligence officials say actively sought to interfere in the 2016 presidential election on behalf of Trump. Independent counsel Robert Mueller has been investigating the Russia meddling, which Trump has denounced as a "witch hunt."

Trump headed to the G-7 meeting after his administration imposed sanctions on those nations participating, likely making for a fractious summit.

The president tweeted that he was heading for Canada "for talks that will mostly center on the long time unfair trade practiced against the United States."

I am heading for Canada and the G-7 for talks that will mostly center on the long time unfair trade practiced against the United States. From there I go to Singapore and talks with North Korea on Denuclearization. Won’t be talking about the Russian Witch Hunt Hoax for a while!

"All of these countries have been taking advantage of the U.S. on trade," Trump said. But he downplayed the tension, saying, "When it all straightens out, we'll all be in love again." 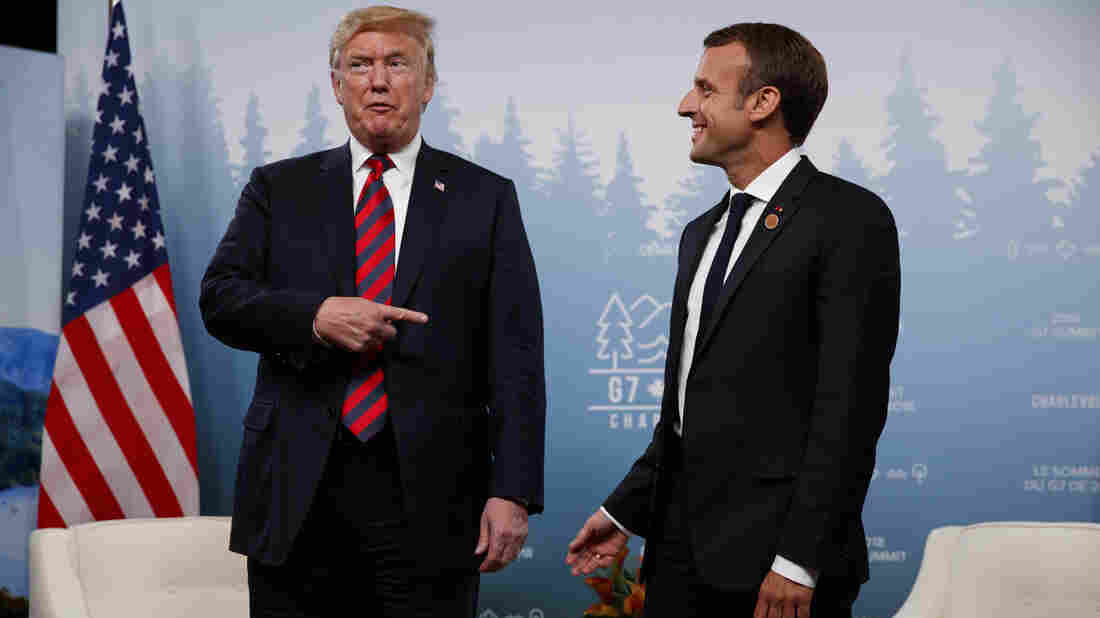 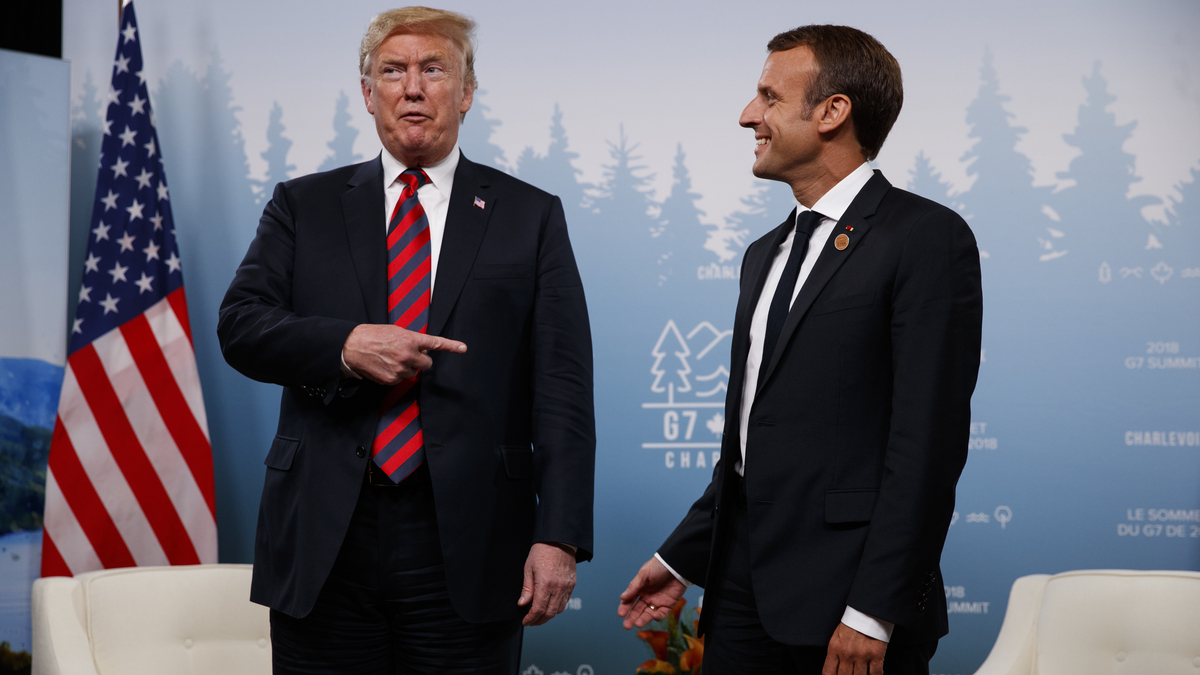 Trump said he "may leave a little bit early" from the G-7 meeting.

Then, Trump and Macron met again on the sidelines of the summit Friday evening. The two leaders acknowledged that they sometimes have differences but were also very complimentary of one another, especially Trump of Macron.

Macron said, in part, "sometimes we disagree but we always speak and share I think common concerns and common values, and we share a willingness to deliver and get results together."

Trump said of Macron, "we have a little test once in a while when it comes to trade" but also said they have a very good relationship.

The president also met on Friday with Canadian Prime Minister Justin Trudeau, though Trump said the two did not discuss Russia being brought back into the group.

The two have bristled over trade and tariffs recently but appeared jovial after their meeting. Trump first joked that the Canadian leader "has agreed to cut all tariffs."

"Our relationship is very good. We're actually working on cutting tariffs and making it all very fair for both countries. And we've made a lot of progress today," Trump said. "We'll see how it all works out."

Trump maintained the U.S. relationship with the country's northern neighbor is "probably better, as good or better, than it's ever been. And I think we'll get to something very beneficial to Canada and to the United States." 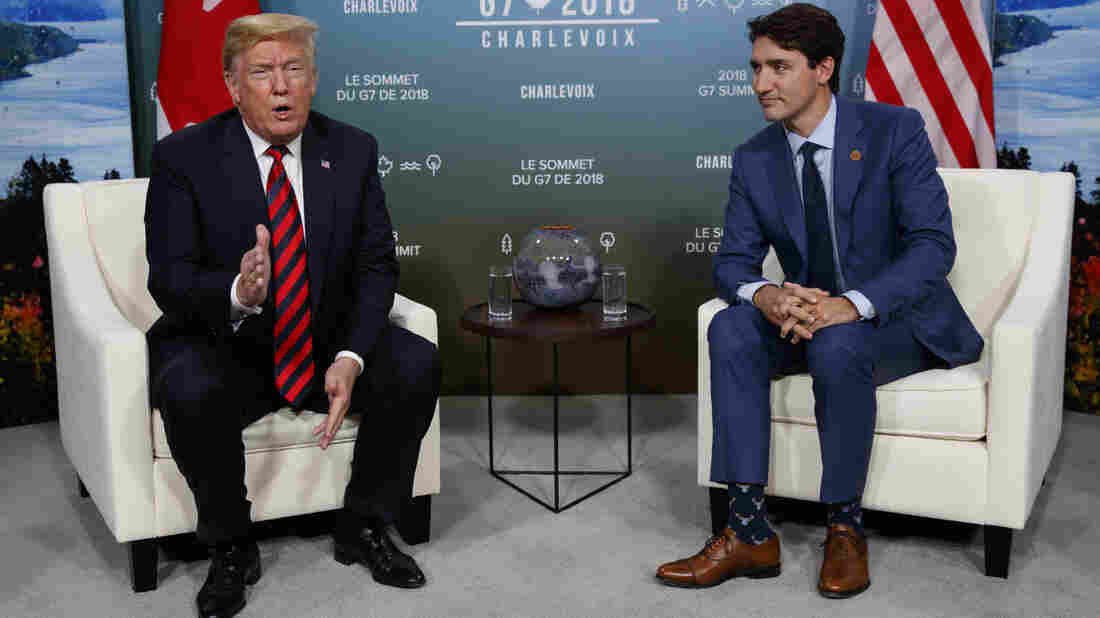 In his remarks to reporters on the White House lawn before departing for Canada Friday morning, Trump touched on a wide range of topics.

Referring to the Mueller investigation, and the possibility it may result in criminal charges against him, Trump maintained he has "the absolute right to pardon myself," adding "but I'll never have to do it because I didn't do anything wrong." At the same time Trump said, "I'm not above the law."

Trump also said he intends to issue more pardons, including to the late boxing champion Muhammad Ali. Ali was convicted in 1967 of avoiding military service. But his conviction was overturned by the U.S. Supreme Court, and in a statement Ali's attorney, Ron Tweel, said that although he appreciated Trump's sentiment, "a pardon is unnecessary." Noting Ali's conviction had been overturned, Tweel said "there is no conviction from which a pardon is needed."

Trump said he had a list of 3,000 names for possible pardon consideration.

He also said first lady Melania Trump wanted to accompany him on his trip to Canada and then to Singapore for his summit with North Korean leader Kim Jong Un, but that "she can't fly for one month," on advice of her doctors.

Trump revealed that the first lady, who was admitted to Walter Reed Military Medical Center last month for what was described as a "benign kidney procedure," had "close to a four-hour operation" and said "she's doing great."

Trump also had a restrained show of support for Environmental Protection Agency administrator Scott Pruitt, who has come under fire for using government officials to conduct personal business including trying to find him a used mattress from the Trump International Hotel and driving him around Washington in search of his favorite moisturizer.

Pruitt, Trump said, "is doing a great job within the walls of the EPA." But outside, Trump said, "he's being attacked very viciously by the press, and I'm not saying he's blameless but we'll see what happens."