Accessibility links
As U.S. Flexes Its Muscles On Trade, Other Countries Are Beginning To Push Back This weekend's G-7 summit comes as the U.S. clashes with its biggest trading partners over tariffs. President Trump wants them to make big concessions, but he's encountering a lot of resistance. 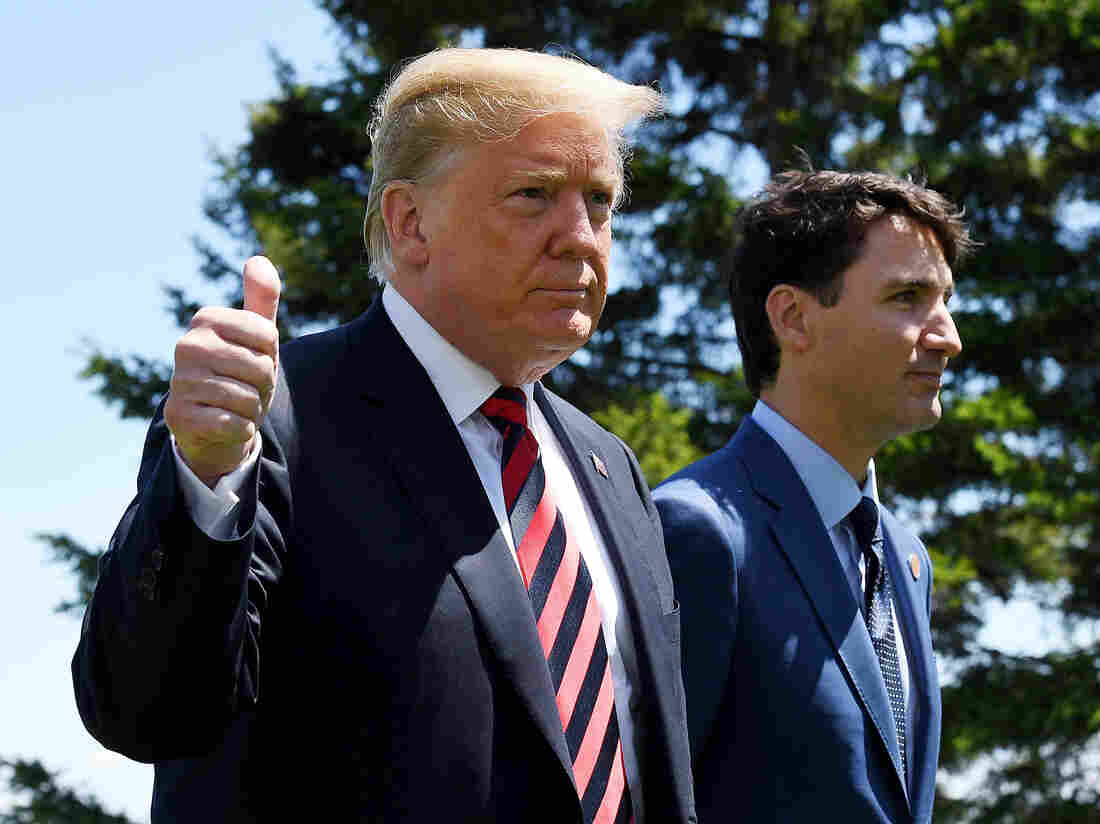 President Trump is greeted by Canadian Prime Minister Justin Trudeau at the official welcome of a G-7 summit Friday in Quebec. The summit comes as the U.S. is clashing with Canada and other big trading partners over tariffs. Leon Neal/Getty Images hide caption 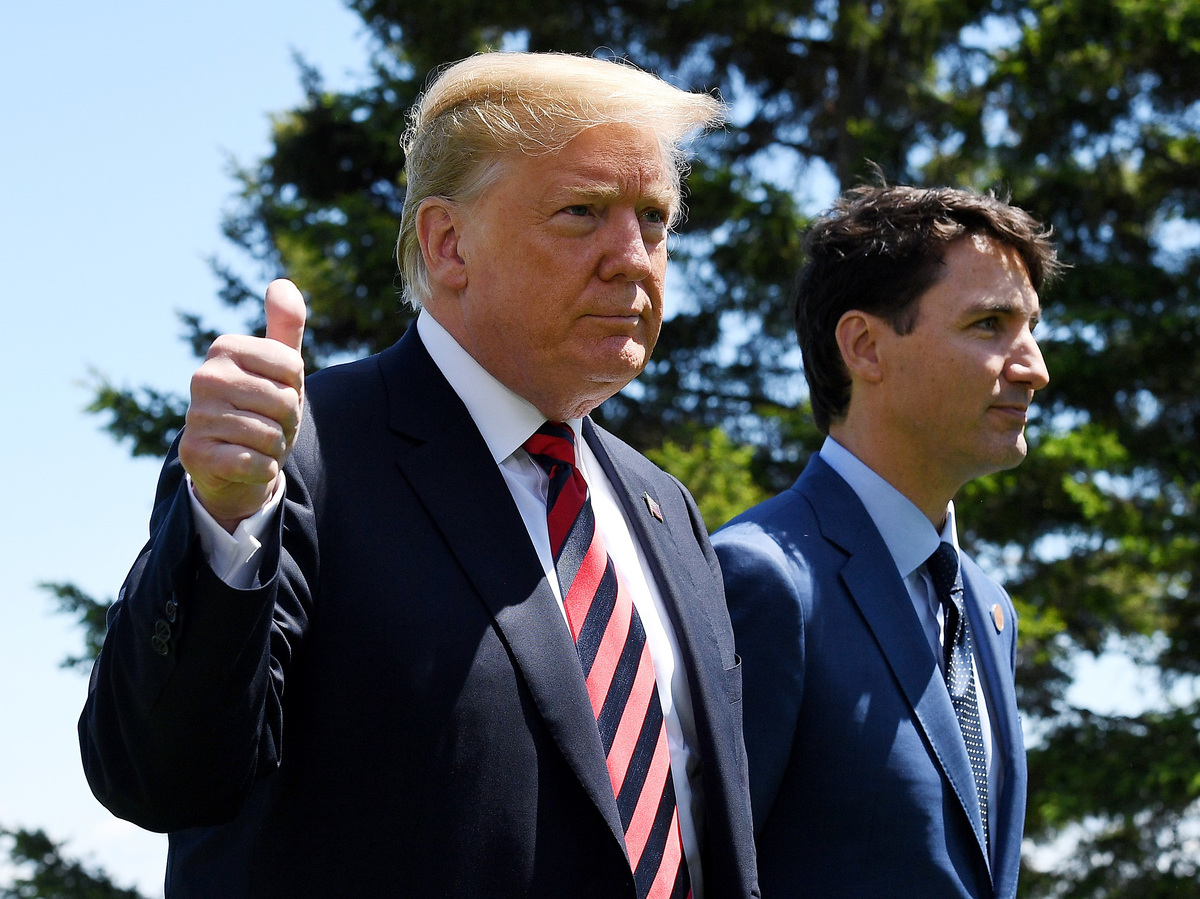 President Trump is greeted by Canadian Prime Minister Justin Trudeau at the official welcome of a G-7 summit Friday in Quebec. The summit comes as the U.S. is clashing with Canada and other big trading partners over tariffs.

As the world's largest economy, the United States can use its considerable economic muscle to force other countries into making concessions in trade disputes.

But as President Trump is finding out, even the biggest guy on the block can face resistance by pushing too hard.

As leaders of the Group of Seven industrialized countries meet in Quebec, Trump is facing serious opposition from some of America's closest allies, with some Western leaders warning that they are willing to part company with the U.S. over trade.

"The American president may not mind being isolated, but neither do we mind signing a six-country agreement if need be," French President Emmanuel Macron said in a tweet Thursday.

The American President may not mind being isolated, but neither do we mind signing a 6 country agreement if need be. Because these 6 countries represent values, they represent an economic market which has the weight of history behind it and which is now a true international force https://t.co/UA86fcjozs

Trump came to office proclaiming that the U.S. has been taken advantage of by its trading partners. He has sought to renegotiate trade agreements and threatened to impose tariffs on countries that resisted.

His efforts have generated opposition all over the world, from both rivals such as China and allies like Canada and Germany.

"We have to believe that at some point, common sense will prevail. But we see no sign of that in this action today by the U.S. administration," Canadian Prime Minister Justin Trudeau noted tartly last week, after the White House decided to impose tariffs on steel and aluminum imported from its northern neighbor.

Meanwhile, Beijing has threatened to retaliate by cutting off imports of products such as pork and soybeans, if Trump goes ahead with a plan to slap tariffs on Chinese goods.

"[Trump] is getting a lot of pushback from just about every country that he's taking a tough stance against," says Douglas Irwin, professor of economics at Dartmouth College. "There's a lot of global resistance, I think, to the way the Trump administration is trying to push U.S. trade policy."

Trump has argued that the U.S. can negotiate with its trading partners from a position of strength because other countries want access to the vast American market and will have no choice but to give in to U.S. demands.

Hardball tactics have worked in the past. During the 1980s, the Reagan administration was able to persuade Japan to open up its markets somewhat, amid rising anger over the growing U.S. trade deficit with Japan.

But Japan was a major Cold War ally that needed American protection. Today, the major U.S. trading partner is China, which is simply not as vulnerable to U.S. pressure, Irwin notes.

Moreover, the U.S. is not as dominant a player in the global economy as it was in the 1980s, he says.

"The weight of the world economy has really shifted toward Asia. That's where some really big, rapidly growing markets are, and the U.S. is just not quite as important as it was before," he says.

Many countries also remain suspicious of the way the U.S. seems to have done an about-face on trade policy, appearing to abandon its long-standing support for free and open markets, says Simon Johnson, professor of entrepreneurship at the Sloan School of Management at the Massachusetts Institute of Technology.

The U.S. has long spread the gospel of markets all over the word, arguing that free trade benefits all countries. Trump, by contrast, often seems to view trade as a kind of war game in which one country's gain necessarily means another country's loss.

"I think a lot of countries are taking the position that they have cooperated for a long time in what has always been an American-initiated and an American-overseen system, so now Mr. Trump wants to change the rules. To what end? What exactly is he going to get from that?" Johnson says.

Irwin says U.S. trading partners are "drawing a line in the sand early on, saying, 'Look, this is an inappropriate way of approaching things. You can't treat us this way. And we're going to resist.' Because if they just cave in, then the Trump administration might double the ask."