Accessibility links
Trump Administration Move Imperils Pre-Existing Condition Protections The Justice Department has announced it will not defend the Affordable Care Act in an ongoing lawsuit brought by 20 states that challenge the legality of core pillars of the law. 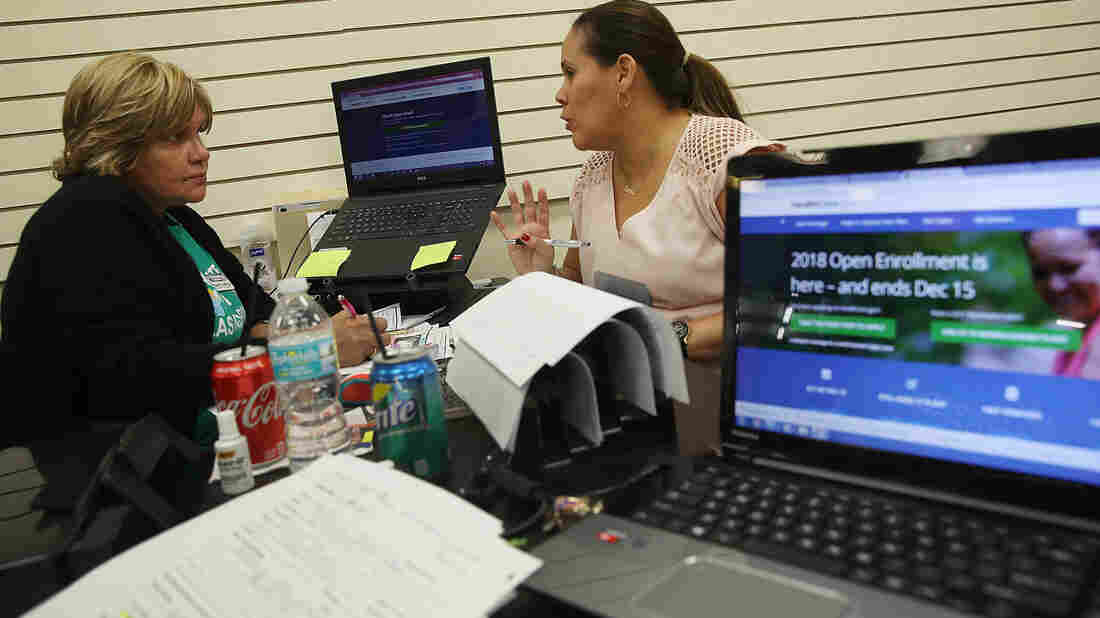 Margarita Mills (left), an insurance agent from Sunshine Life and Health Advisors, speaks with Daniela Morales as she shops for insurance under the Affordable Care Act at a store set up in the Mall of Americas, on Nov. 1, 2017, in Miami. Joe Raedle/Getty Images hide caption 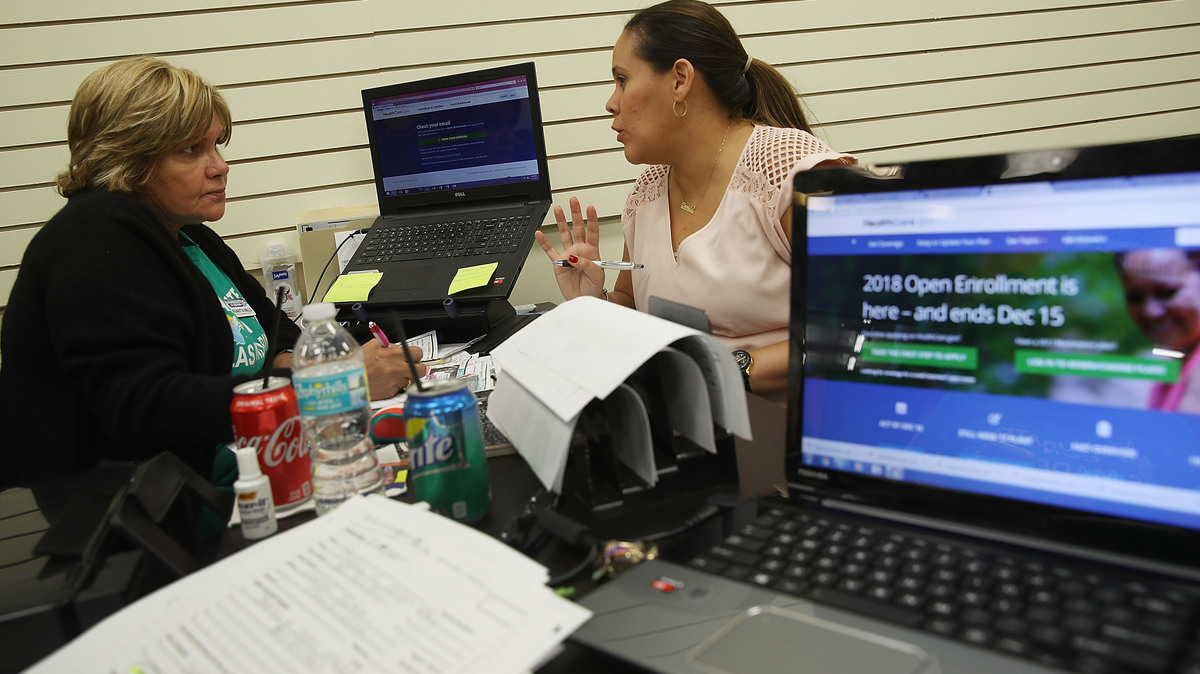 Margarita Mills (left), an insurance agent from Sunshine Life and Health Advisors, speaks with Daniela Morales as she shops for insurance under the Affordable Care Act at a store set up in the Mall of Americas, on Nov. 1, 2017, in Miami.

The Trump administration's decision to abandon the Affordable Care Act in an ongoing court challenge could affect some of the most popular pillars of the law — further intensifying the fight over health care in the middle of an election year.

It is unusual for the Justice Department to refuse to defend existing law in court challenges. In this case, 20 states sued the federal government in February claiming the individual mandate is unconstitutional after Congress zeroed out the tax penalty for not having health insurance in its 2017 tax cut law. The lawsuit, led by Texas Attorney General Ken Paxton, contends that without an individual mandate, the entirety of the ACA, commonly known as Obamacare, is unconstitutional.

If that argument prevails in the courts, it would render unconstitutional Obamacare provisions that ban insurance companies from denying coverage to people with pre-existing conditions — arguably the most popular component of the 2010 health care law.

As many as 130 million adults under age 65 in the U.S. have pre-existing conditions that could result in their not being able to get insurance coverage in the private market, according to the Department of Health and Human Services. The Kaiser Family Foundation puts the number at about a quarter of the country's under-65 population. A Kaiser tracking poll in June 2017 showed 70 percent of adults want Congress to keep pre-existing condition protections.

The ACA made all those practices illegal. By withdrawing from defending the law in court, the Trump administration is saying it no longer supports those consumer protections, which are popular with voters. The move could upend insurance markets for next year and change the dynamic of this fall's elections.

"This suit comes as insurers are proposing individual market premiums for 2019. The lawsuit injects more uncertainty into what is already an uncertain environment for insurers. Insurers hate uncertainty, and they respond to it by hedging their bets and increasing premiums," says Larry Levitt, senior vice president at the Kaiser Family Foundation.

Nicholas Bagley, a professor at the University of Michigan Law School who had been a Justice Department lawyer, says DOJ's move is troubling.

"The Justice Department has a long-standing, durable, bipartisan commitment to defend acts of Congress. It's a cornerstone of what they do," he says. "For the Trump administration to crumple that up and throw it out the window is galling."

Just hours before the Justice Department officially withdrew from the case, three of the staff attorneys who had been working on it withdrew. "These are civil servants. They're not political. They are good soldiers. Their job is to defend federal programs," Bagley says, noting that he has not talked with any of them about the case. "They believed they could not in good conscience, consistent with their professional obligations, sign the brief. These are people who defend programs they disagree with all the time."

The Justice Department has opted not to defend existing law in the courts in other matters. For instance, in 2012 the Obama Justice Department said it would not defend the Defense of Marriage Act, which legally defined marriage as a union between a man and a woman for federal purposes.

America's Health Insurance Plans, the trade association for health insurance companies, supports the pre-existing condition protections under the ACA. "Removing those provisions will result in renewed uncertainty in the individual market, create a patchwork of requirements in the states, cause rates to go even higher for older Americans and sicker patients, and make it challenging to introduce products and rates for 2019," AHIP said in a statement.

AHIP said it will file an amicus brief in support of the law that "provides more detail about the harm that would come to millions of Americans if the request to invalidate the ACA is granted in whole or in part."

On Capitol Hill, congressional Republicans' reaction to the Trump administration's decision was muted, with many lawmakers voicing skepticism that the courts would ultimately rule against a law already upheld by the Supreme Court.

"We need to let that go forward and see if it goes anywhere," said Rep. Tom MacArthur, R-N.J. "I don't know if that legal logic will fly or not." MacArthur worked on legislation to continue pre-existing condition protections during the GOP's unsuccessful effort to repeal Obamacare last year.

While the ACA has been the target of a sharply divided and partisan debate for nearly a decade, pre-existing protections are one of the most popular actions Congress has taken in modern times. "I think that's a pretty essential pact with the American people," said MacArthur.

Health care is already a dominant issue in this year's elections, with voters regularly citing it as a leading determinant for how they will vote.

"There is no doubt that Republicans are responsible for the rising cost of healthcare premiums and the high likelihood that many will no longer be able to afford basic care at all, and they will face serious blowback in the midterms," the House Democrats' campaign operation said in a statement.