Accessibility links
Marine Corps' Top General Joins Ramadan Meal Gen. Robert Neller, commandant of the Marine Corps, joined a Baltimore-area mosque for Iftar, the evening meal during Ramadan which breaks each day's fast. He was the guest of a Muslim Marine vet. 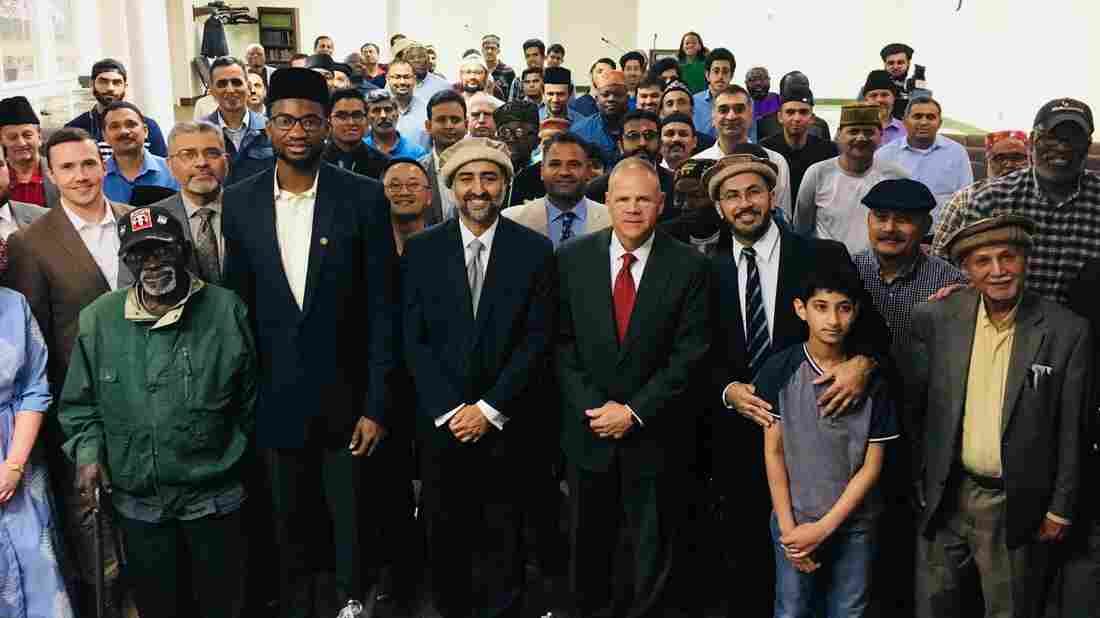 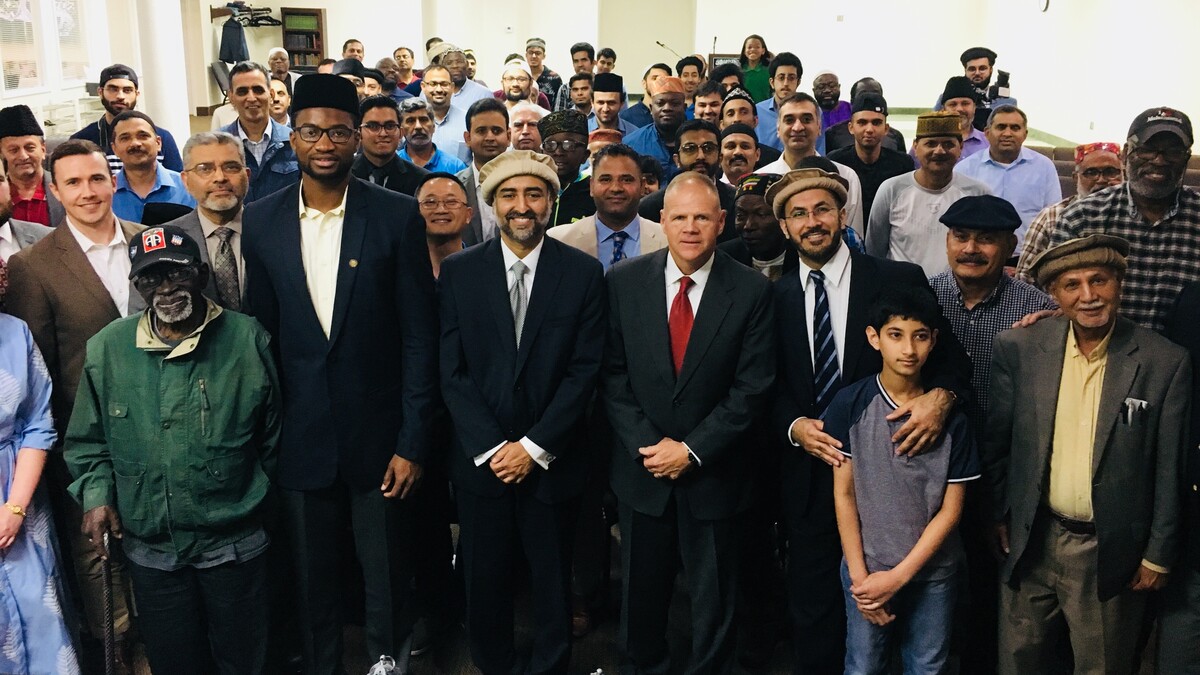 Gen. Robert Neller, front row fourth from left, at Bait-us-Samad (House of the Eternal) mosque outside Baltimore, Md., Thursday night. The Marine Corps' top general was an Iftar guest at the invitation of Marine veteran Mansoor Shams, fifth from left.

The commandant of the U.S. Marine Corps, Gen. Robert Neller, stopped by a mosque outside Baltimore on Thursday evening for Iftar, the fast-breaking meal during the month of Ramadan, when practicing Muslims don't eat or drink during daylight hours.

"I don't consider coming to your mosque to be anything extraordinary," Neller said, in his brief remarks.

But such a visit wasn't ordinary, either.

As the Marines' top general, Neller is a member of the Joint Chiefs of Staff, which advises the president. Last year President Donald Trump skipped Iftar, ending a 20-year tradition of hosting a Ramadan dinner at the White House.

In his remarks to the 100 or so Ahmadi Muslims present, Neller gestured to Mansoor Shams, the former Marine who invited him.

"He's a Marine and he asked me to come and I said yes," said Neller.

This year Trump did host a dinner, last Wednesday night. The guests were mostly foreign dignitaries. No mainstream American Muslim leaders were invited.

"And that points to a larger theme that has been developing under this president that Islam is a foreign religion," Omar Noureldin, vice president of the Muslim Public Affairs Council told NPR's Ari Shapiro. "I mean, American Muslims have been a part of this country since its founding."

A message of inclusion

At the Bait-us-Samad (House of the Eternal) mosque near Baltimore, Neller would not take media questions but he did take some from the audience, mostly about how Muslims are perceived by fellow Americans. He explicitly avoided politics or policy with his answers.

"There are always going to be [those who] lump large groups of people in single categories. But I think as a Marine I'm more interested in the individual and their ability to serve," he said.

Neller shared some stories about his travels as a Marine to places where he was the minority as a white, Catholic American. He spoke about using what he knows about Islam to find common ground with Iraqi leaders during a year spent in Anbar province.

"We're all sons of Abraham – why are you fighting me?" Neller recalled telling them.

Neller added that in combat, all the distractions of the race and religion of your fellow Marine fall away.

Mansoor Shams, the former Marine who invited Neller, says he wrote to the commandant last year, not expecting a response. But Neller did write back and eventually asked Shams to speak to Marine officers about Islam. Neller said that coming to the mosque was a way to return the favor.

"It gave me more hope, it gave me more optimism," Shams said. "Even when you're going through those bumps on the road where you're getting bashed left and right for your faith, that when you have the commandant of the Marine Corps standing there like a true patriot, an American, in your mosque it just gives you some goosebumps that say everything is going to be OK."

Shams served four years in the Marine Corps and is now a businessman, but he spends lots of his time doing outreach. Part of that has been organizing Iftar dinners all this month with veterans.