Accessibility links
Mister Rogers Talked Frankly With Kids About 'Grown-Up' Issues That Weren't Filmmaker Morgan Neville says he gets asked one question more than any other: Was Fred Rogers as nice as he appeared on TV? Won't You Be My Neighbor? answers that question with an emphatic yes. 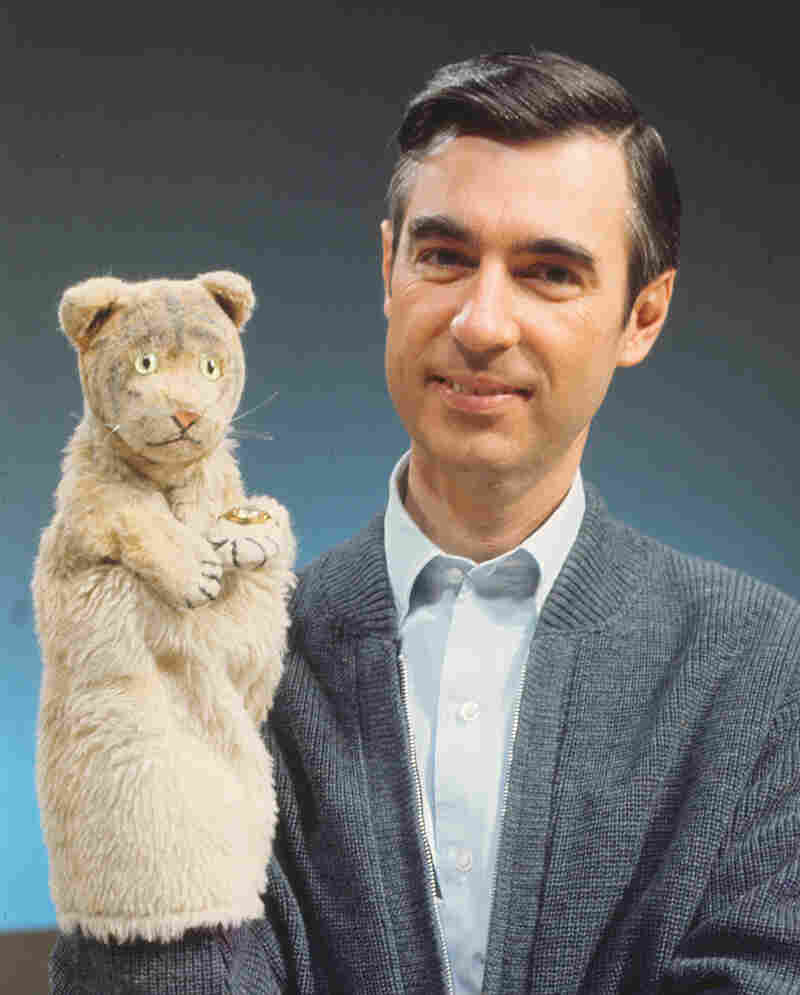 Along with his trusty puppet, Daniel Tiger, Fred Rogers explained a complex world to kids in terms they could understand. His goal, says filmmaker Morgan Neville, was to "allay fear and promote love." Focus Features hide caption 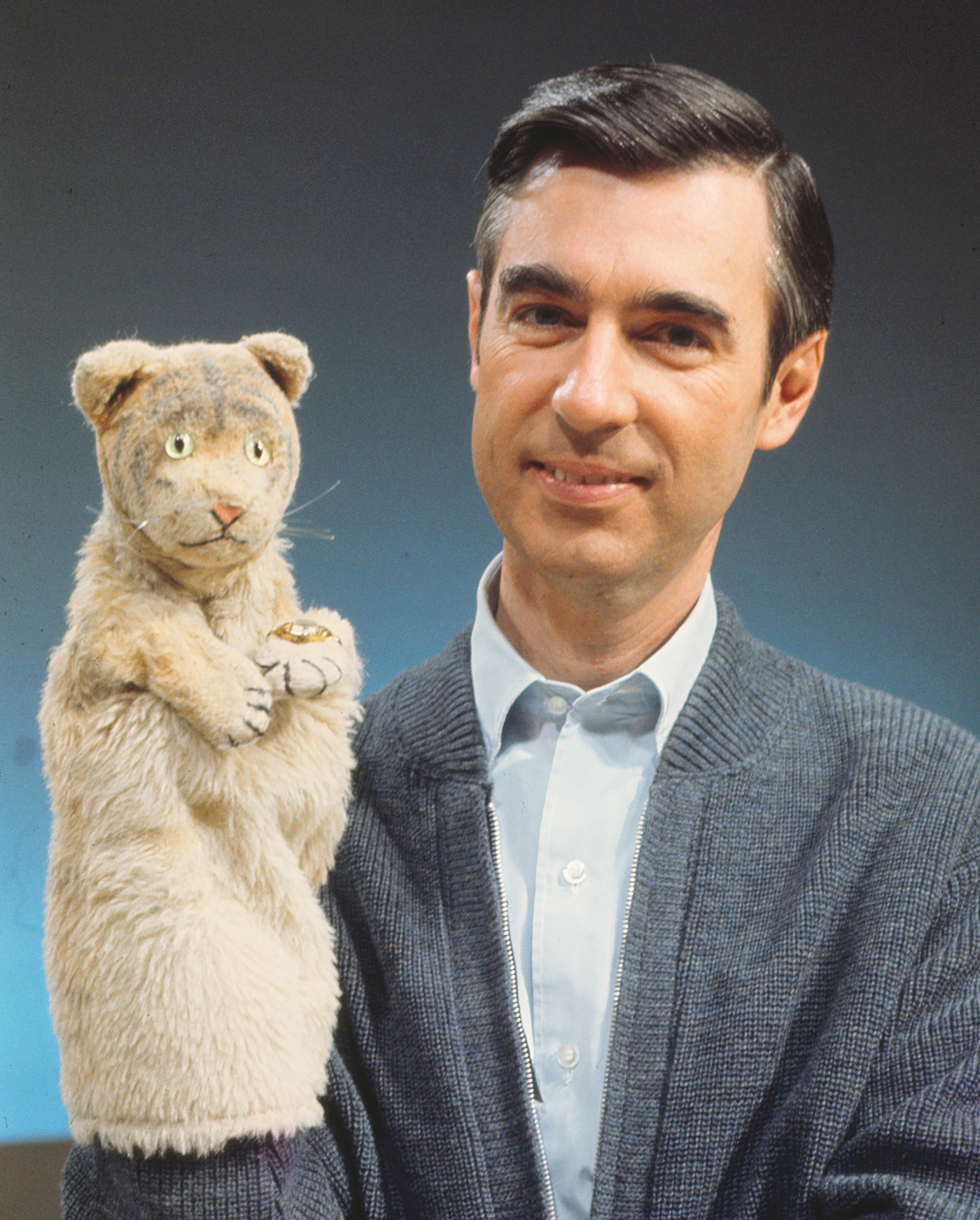 Along with his trusty puppet, Daniel Tiger, Fred Rogers explained a complex world to kids in terms they could understand. His goal, says filmmaker Morgan Neville, was to "allay fear and promote love."

It's hard to imagine anyone sending hate mail to Fred Rogers, but there was one episode of Mister Rogers' Neighborhood that brought the beloved children's TV star a bit of blowback: "He did an episode about Santa Claus," explains filmmaker Morgan Neville. "And he didn't like the idea that there was somebody who snuck into your house in the middle of the night ... so he told kids the truth ... and a lot of parents wrote a lot of angry letters."

Santa aside, Rogers generally flew "under the radar," Neville says, even when he was engaging kids in conversations that some adults considered well beyond their years. With a toy trolley, talking puppets and a simple set, the show had low production value, but the host was "cutting edge," the filmmaker explains, in respecting the emotional intelligence of children; helping them grapple with "grown-up" issues such as death, divorce and disturbing current events.

Aimed at toddlers and preschoolers, Mister Rogers' Neighborhood made its nationwide debut in 1968 and aired for more than three decades. It's now the subject of a new documentary called Won't You Be My Neighbor?, directed by Neville.

"Most of us have a relationship with Fred Rogers that predates our memory ..." Neville says. "It's very deep in us and he speaks to us almost like our own inner child."

On how Rogers discovered television during a visit home during college

He came back to visit his parents for spring break in 1948 and his parents had gotten a television — one of the first televisions in the neighborhood — and he watched it on this spring break and said: My God, this is an incredible invention and I can't believe how it's being misused.

On being "cutting edge" in respecting the emotional maturity of children

What he's doing is not just providing joy for children but really trying to allay fear. When he looked at children what he realized is that most adults condescend to children. When bad things happen they say, "Don't worry about it," or "It wasn't anything." And kids are way too smart and intuitive to not know when those things are happening. So what he decided to do is to level with kids — to really speak to them honestly and say, "Yes something bad happened, but let me tell you why, and let me explain it in age-appropriate terms." Because he really felt that fear was was the most destructive force in our society.

On whether he was as nice as he appeared on television

This is the the question I get more than any other question. ... There's a letter that I found from a 5-year-old boy to Mister Rogers that said, "Dear Mister Rogers, Are you for real?" ... and I think that's the fundamental question we all have. ... And the reality is: Yes, he is 100 percent for real.

We've seen so many of our cultural figures fall and there's almost this expectation of somebody who is really promoting kindness ... that there has to be something dark behind him. And, in fact, the miraculous thing is that he is exactly who he seems. Mister Rogers invited Officer Clemmons to share a wading pool at a time when that could still be considered radical. John Beale/Focus Features hide caption Mister Rogers invited Officer Clemmons to share a wading pool at a time when that could still be considered radical.

On the episode when Mr. Rogers invited an African-American police officer, played by François Clemmons, to rest his feet in a wading pool on a hot day

He was, in his own quiet, subtle way trying to model how we should treat each other. It's really the thing he's doing over and over with: Won't you be my neighbor? What he's asking is: How do we treat each other? What kind of neighborhood are we going to have? What are the rules by which we live in a society together?

That's his subtle way of saying: There's nothing wrong with sharing a pool with a person of a different race. In fact, at the end of that scene, Fred takes his towel and dries François' feet, you know, as Jesus did with the disciples ... and none of that was by accident. It was all by design. Fred knew exactly what he was doing.

On not shying away from difficult topics and current events

He dealt with divorce and death. ... He knew that children experience these things and he felt like his mission was not to tell kids that everything's all right, but to tell kids that bad things do happen and this is how you can process them. ...

[After Robert F. Kennedy was assassinated in 1968] Fred knew that children would be home and they would know that this bad thing had happened. And so he quickly put together an episode that aired [ahead of the televised funeral] ... where he could explain to people how to speak to their children about something as horrific as an assassination.

And that was really Fred in a nutshell. ... He did it again and again. He did things around the Challenger disaster, the Gulf War, 9/11, Reagan's assassination attempt. ... He really felt like it was in those moments he was really doing the best of what he wanted to do. That that's when people really needed him.

On remembering that Rogers was human

He wasn't a saint. He was a human who had insecurities and doubts and made mistakes. And, really, throughout his entire life, from his earliest days to his deathbed, was wondering if he had done enough. ... I think it's important to understand that he was human and not a saint, because if you sanctify somebody like Fred Rogers it means that we don't have to try and live up to him.

Fatma Tanis and Mallory Yu produced and edited this interview for broadcast. Beth Novey adapted it for the Web.