Accessibility links
Not My Job: We Quiz Baseball Star Keith Hernandez On 'Fifty Shades Of Grey' Back in the day, Hernandez did ads for the men's hair brand Just for Men — the tag line was "No play for Mr. Gray." We'll ask him three questions about another Mr. Grey. 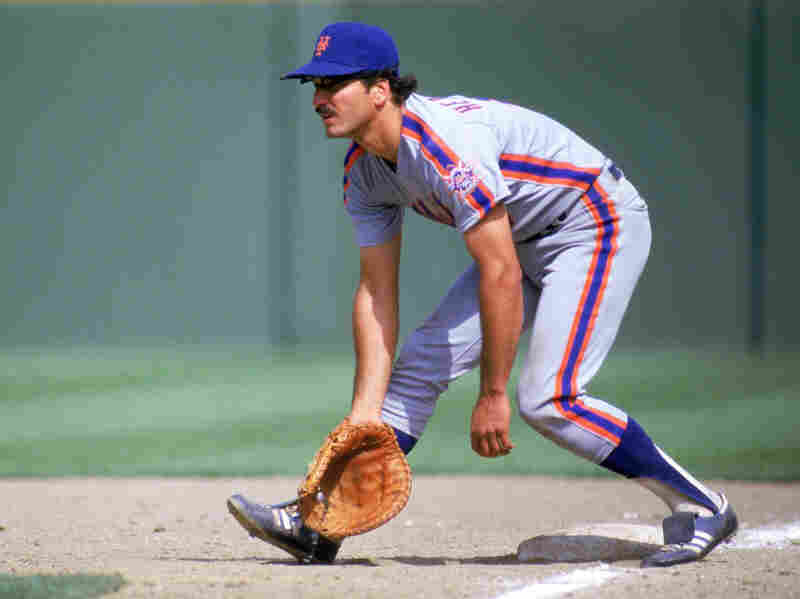 Keith Hernandez of the New York Mets is shown above during a 1986 game against the San Diego Padres. Stephen Dunn/Getty Images hide caption 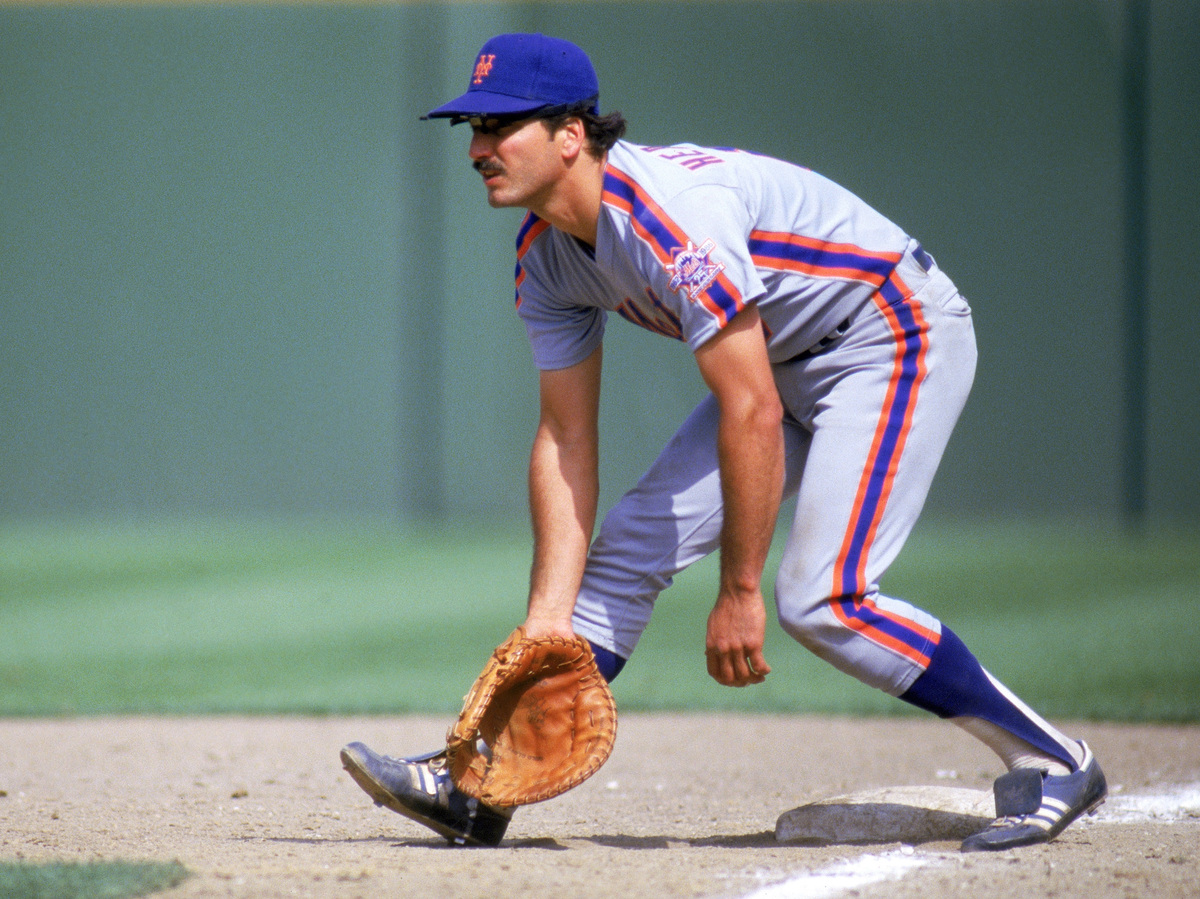 Keith Hernandez of the New York Mets is shown above during a 1986 game against the San Diego Padres.

First baseman Keith Hernandez won 11 consecutive Gold Glove Awards for his extraordinary fielding in the 1970s and '80s. After his Major League career was over, he went on to have a celebrated guest appearance on Seinfeld and enjoy fame as a color commentator for his old team the New York Mets. He has now written a new memoir called I'm Keith Hernandez.

Back in the day, Hernandez did ads for the men's hair brand Just for Men — the tag line was "No play for Mr. Gray." We've invited Hernandez to answer three questions about another Mr. Grey — Christian Grey, from E. L. James' novel Fifty Shades of Grey.

And now the game where we ask people who are experts in one thing about something else entirely. It's called Not My Job. Keith Hernandez is acclaimed as one of the best first baseman in the history of baseball, winning 11 consecutive Gold Gloves. Think about that - it means he won at least 10 of them while playing with a solid gold glove.

SAGAL: He went on to have a celebrated appearance on "Seinfeld," fame as a color commentator for his old team, the Mets, and now he has a new memoir called "I'm Keith Hernandez." Keith Hernandez, welcome to WAIT WAIT... DON'T TELL ME.

KEITH HERNANDEZ: It's great to be with you.

SAGAL: It's great to talk to you. The title of your book - "I'm Keith Hernandez" - that was a famous line from your "Seinfeld" episode. One of the things that's amazing to me - you had a very long career in the major leagues. You did exactly one hour of sitcom. But it seems like people often talk about you in relation to that sitcom. Is that right?

HERNANDEZ: Don't ask me to help you move.

SAGAL: That's considered - I mean, you've been out there with your memoir, "I'm Keith Hernandez." Are most of the questions you're getting about baseball or about "Seinfeld?"

HERNANDEZ: Mostly baseball because it's a baseball book. But there are - you know, the younger generation that did not see me play - they'll say, nice game, pretty boy, or...

HERNANDEZ: That's usually the main one. Or, what was it like to kiss Elaine?

HERNANDEZ: So those are the main questions that I get.

SAGAL: Yeah. I'm going to ask you about one of your trademarks, which is your mustache. You've had - you had that all through your playing career. Am I right?

HERNANDEZ: I did three times in my life shave it off. And one time, just recently, I kept it off for over a year, and I never - even my brother doesn't like it (laughter), so...

SAGAL: Really? Isn't it weird, though, when people look at you, and they say, I don't like that, and what they're looking at is your face?

LUKE BURBANK: When you get hit by a pitch...

BURBANK: ...Does it hurt super bad and you guys are just pretending it doesn't hurt that bad?

HERNANDEZ: In our day, we were told, never let a pitcher know he hurt you. But boy, did it hurt. Trust me.

SAGAL: I know that there are a certain proportion of our audience right now who are very bored with this baseball chat...

SAGAL: ...And are saying out loud to their radios, ask him about his cat. So...

SAGAL: Your cat has become a celebrity on social...

HERNANDEZ: Yes. You know, I take him out in the morning on my shoulder and get the newspaper. It's around a 30-yard walk. And I just was - just started tweeting. And someone - I'd just learned how to video. It was my first video. And it just went viral, and now everybody doesn't give a crap about me. They all want to see Hadji.

SAGAL: Can you put Hadji on the phone?

SAGAL: Has it gone to his head?

BURBANK: Is he named for Gil Hodges?

HERNANDEZ: No, he's actually from the "Johnny Quest" cartoon if you remember, back in the...

HERNANDEZ: And Hadji is a Bengal cat, which is a province of India. So it was only - it was perfect, and that had to be his name.

SAGAL: Right. So did you imagine when you were a player that, someday, your playing days would end, and you'd end up talking about your cat on National Public Radio?

HERNANDEZ: I have to say no.

SAGAL: Yeah. This is not what you expected.

SAGAL: I understand. Well, don't let it go to his head. You don't want him, like, dipping into the tuna or anything bad like that.

SAGAL: Well, Keith Hernandez, we could talk baseball with you all day, but we have, in fact, invited you here to play a game we're calling...

BILL KURTIS: Mr. Gray Gets A Lot Of Play.

SAGAL: Now, back when you did a famous series of ads for a product called Just For Men - a hair dye. And the tagline, as we all remember, was no play for Mr. Gray. Well, we're going to ask you about a different Mr. Grey - the hero of "Fifty Shades Of Grey..."

SAGAL: ...The first of a series of novels we all thought was scandalous back when we had no real problems.

SAGAL: So answer two out of three questions about the "Fifty Shades Of Grey" series, you'll win our prize for one of our listeners. Bill, who is baseball great Keith Hernandez playing for?

SAGAL: I feel obligated to ask - have you ever read these books, Keith?

SAGAL: I don't think it would help if you had. All right, here's your first question. Some people look down on the "Fifty Shades" series, but the book series has done some real good in the world, as in which of these real cases? A, an Idaho octogenarian was able to subdue a home intruder with a whip she purchased after reading the book.

SAGAL: B, a dying paper mill in Maine was saved because the books were such a hit they stayed in business making the paper for them. Or C, in New York, one woman was able to give herself the Heimlich maneuver at home using a hardback copy of "Fifty Shades Freed."

SAGAL: You're going to go for A, that an octogenarian in Idaho read the books...

SAGAL: You like that. I would like that one to be true, but it was actually the paper mill.

SAGAL: So many copies of this book were sold - more than the "Harry Potter" series - that they actually saved a paper mill because it had to make so much paper for it.

PETER GROSZ: And they were like, no, we'll go out of business, actually.

SAGAL: Here are - you have two more questions, so you can do this. And, you know, you know how this works. You get three chances. You...

SAGAL: ...All kinds of "Fifty Shades" merchandise out there to go with the huge publishing and movie phenomenon. Which of these is a real product? A, a tea called Fifty Shades of Earl Grey.

HERNANDEZ: I'm kind of partial to B.

BURBANK: I knew he was going to pick B.

SAGAL: You're choosing the BDS and M children's cereal...

SAGAL: ...Called Domina-Trix. That is your choice.

BIM ADEWUNMI: It's full of calcium.

SAGAL: ...Appreciate it, but I just want to know if you're making this choice of sound mind and body.

HERNANDEZ: You want me to change, don't you?

GROSZ: Is there another pet, perhaps?

SAGAL: ...Fifty Shades of Earl Grey. We thought that would be obvious, actually. But that's OK. That's OK because you have one more here. Now, we're going to test to see if you've read the book. Which of these is a real quote from the book "Fifty Shades Darker?" A, quote, "desire pools, dark and deadly, in my groin."

SAGAL: B, quote, "his voice runs right through me, desire and anticipation spawning in my belly." Or C, quote, "I don't think my heart could stand the strain of another email like that - or my pants."

HERNANDEZ: Oh, boy. What do you think, Hadji?

HERNANDEZ: We'll run with B.

SAGAL: You're going to run with B. You're right because they were all real.

SAGAL: Oh, you could not have made that up.

SAGAL: Keith - Bill, how did Keith Hernandez do on our quiz?

HERNANDEZ: So I didn't strike out.

KURTIS: Well, you did get two strikes.

KURTIS: That's - that would put you out everywhere but here because you're always in our hall of fame, Keith.

SAGAL: Keith Hernandez's new book is called "I'm Keith Hernandez." It's a memoir especially focusing on his amazingly interesting early years as a pro ball player. Keith Hernandez, thank you so much for joining us on WAIT WAIT... DON'T TELL ME. What a pleasure to talk to you.

HERNANDEZ: Oh, it has been great. Thank you.

(SOUNDBITE OF SONG, "MEET THE METS")

SAGAL: In just a minute, drink your vegetables in our Listener Limerick Challenge game. Call 1-888-WAIT-WAIT to join us on the air. We'll be back in a minute with more of WAIT WAIT... DON'T TELL ME from NPR.