Accessibility links
Maine Voters To Decide On Whether They'll Rank Candidates In Future Elections In asking voters to rank candidates in order of preference, Maine becomes the first U.S. state to adopt a system also used in Australia, Ireland, several other countries, and a handful of U.S. cities. 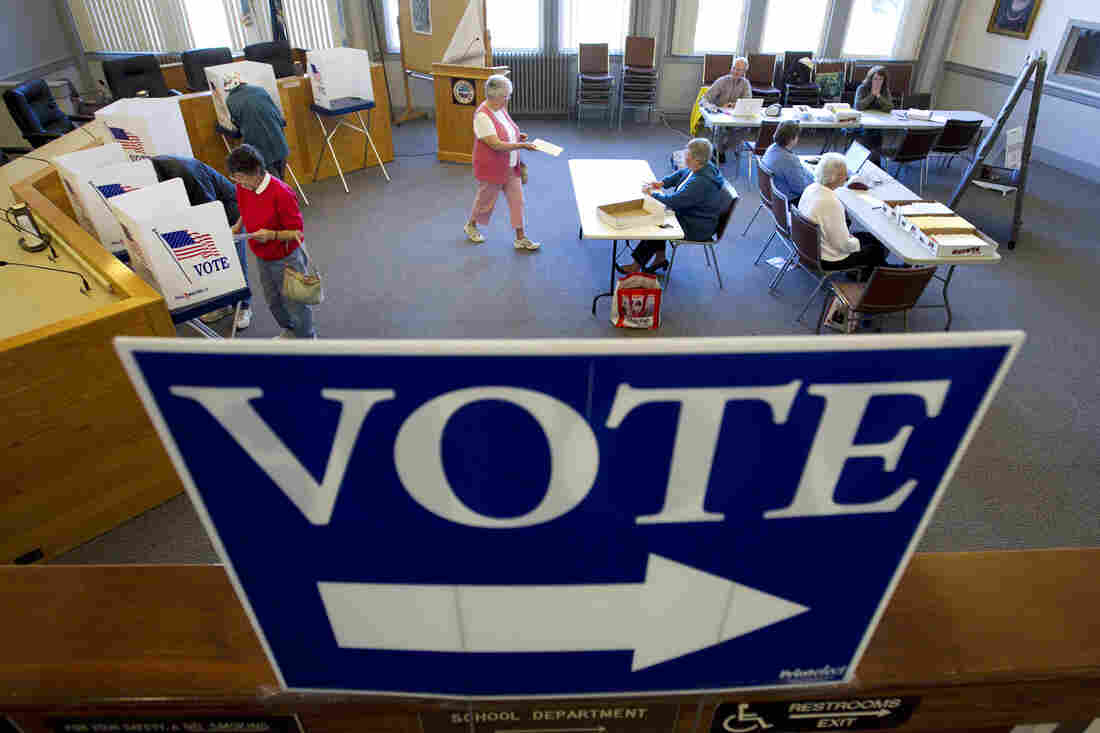 In an Oct. 2012 file photo, voters cast their votes through absentee ballots for the November election in Cape Elizabeth, Maine. Ranked-choice voting will be put to its biggest test when Maine uses the system in a statewide primary election on June 12, the first time a U.S. state has adopted the voting method. Robert F. Bukaty/AP hide caption 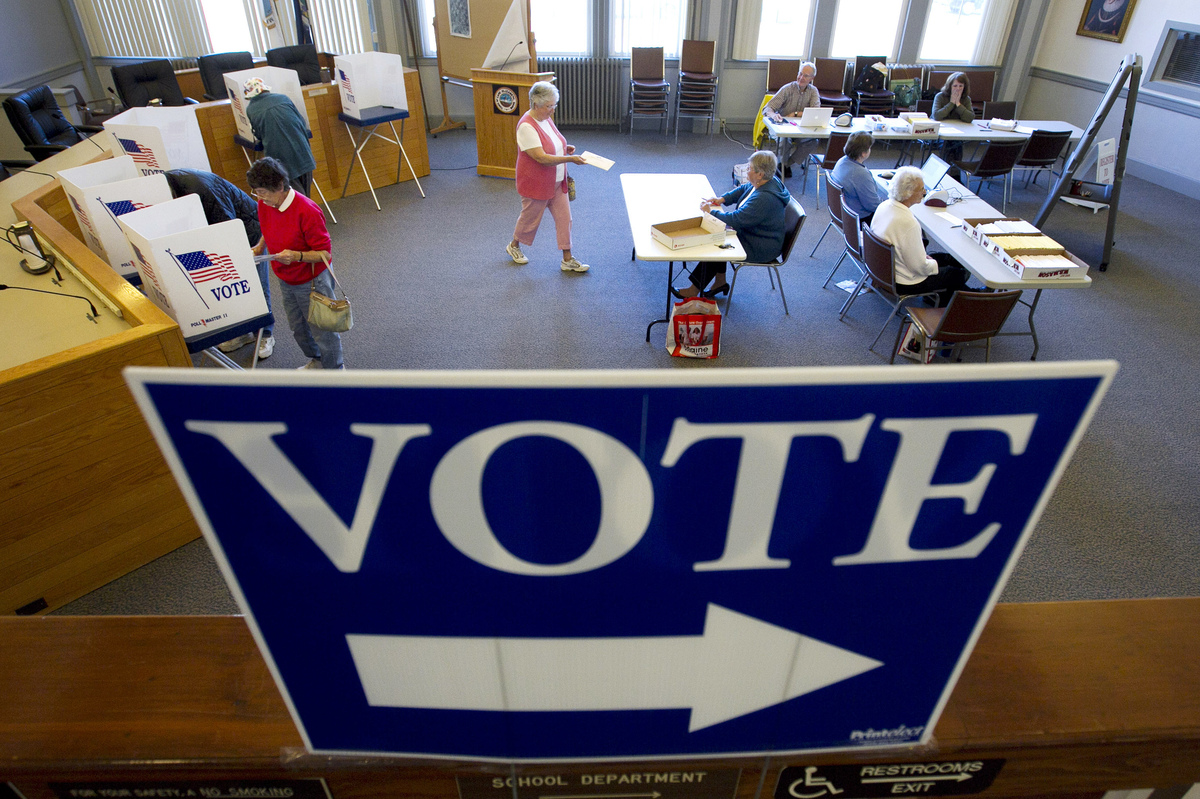 In an Oct. 2012 file photo, voters cast their votes through absentee ballots for the November election in Cape Elizabeth, Maine. Ranked-choice voting will be put to its biggest test when Maine uses the system in a statewide primary election on June 12, the first time a U.S. state has adopted the voting method.

In just a few days, Maine primary voters will participate in a ranked-choice voting experiment so unprecedented that the state's top election official sometimes compares what's about to happen to a dangerous and high-stakes mission in space.

"This is a little bit like Luke Skywalker blowing up the Death Star," Secretary of State Matt Dunlap said of the upcoming June 12 primary. "You get one pass."

In asking voters to rank candidates in order of preference, Maine becomes the first U.S. state to adopt a system also used in Australia, Ireland, several other countries, as well as a smattering of U.S. cities.

Ever since Maine voters ratified its use statewide in 2016, a swarm of logistical, political and legal obstacles have combined to limit its use in this year's elections and threatened to derail its closely watched debut.

Republicans view the system as an attempt to prevent conservatives from winning statewide elections. They've responded with multi-pronged assault that includes multiple court challenges — and blocking funding to help Dunlap's office set up the system and educate voters about how to use it.

Still, on Tuesday, voters will get a chance to rank their choices for governor and U.S. House in primary elections although the years of wrangling could create the conditions for a messy roll-out and future lawsuits. Also on the ballot is a measure that could eventually repeal the election law, a law that some voters approved because of one man, Republican Gov. Paul LePage.

LePage has referred to himself as "Trump before Trump." He is similarly beloved by his supporters and loathed by his critics.

He has upended the state's reputation for cross-party collegiality with the relentless targeting of political foes, whether they're Republican or Democrat.

But the governor has changed more than tenor. He also inspired a radical shift in the method Maine uses to pick its elected officials.

In ranked-choice voting, also known as instant runoff, the candidate must obtain an absolute majority of votes to win (U.S. elections have traditionally relied on what's know as winner takes all voting where the candidate with the greatest number of votes wins, even if that number is less than a majority). It is only used in races with more than two candidates — which is often the case in Maine, a state where independents have been elected governor and to Congress.

Voters rank candidates in order of preference. If one candidate obtains a majority after the first count, she wins. If there's no majority winner, the ranking tabulation begins. The candidate with the fewest first-place rankings is eliminated and each of their voters' second choices are added to the tallies of the remaining candidates. The process continues this way until the ranking tabulation produces a winner or all the ballots are exhausted.

Stephen Farrand, a registered Democrat who lives in Freeport, says he voted for ranked-choice voting in 2016 because LePage's election and re-election were "a real disaster for the state."

"I don't think it would have happened if we had not had prominent independent candidates," he said.

Farrand refers to a split in the center-left electorate that he and others progressives believe helped LePage's ascension to the state's highest office in 2010 and again in 2014.

The hard-charging conservative who had a compelling personal story about his rise from poverty and abuse rode 2010's Tea Party wave to victory in his 2010 primary. 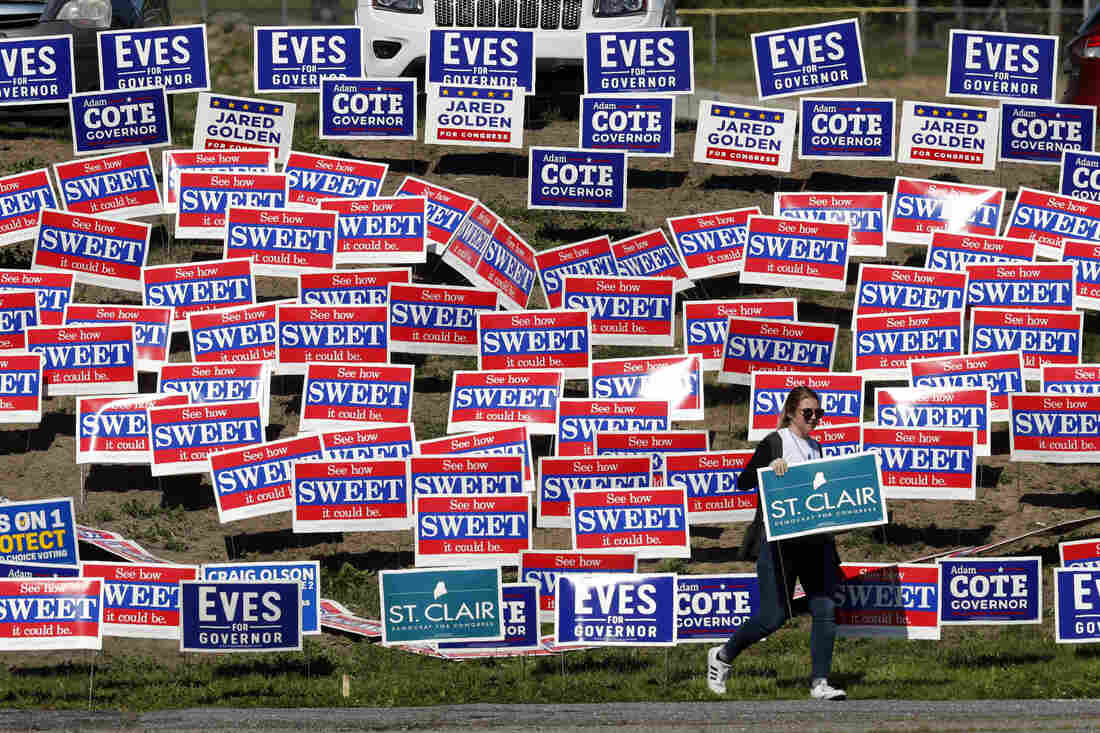 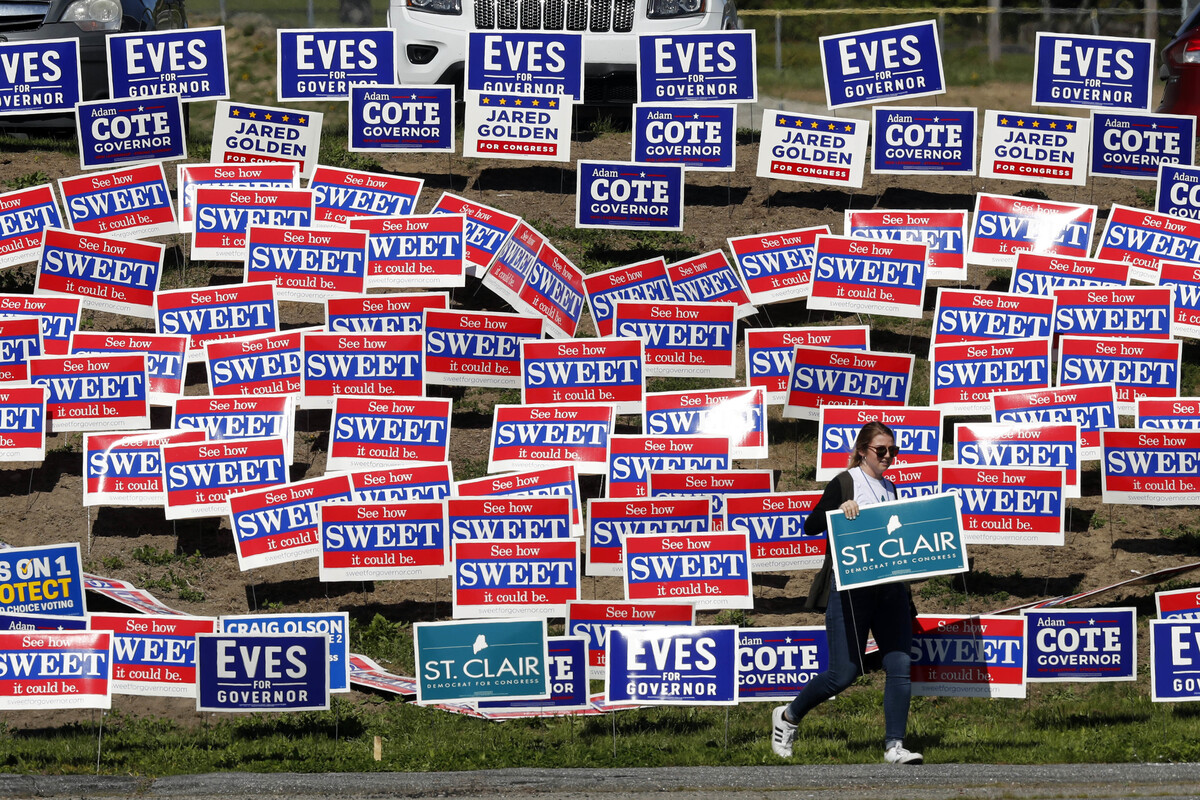 Maine voters will use ranked choice voting in the 2nd Congressional District's Democratic primary. Here, Jacqueline Morris looks for a spot to plant a sign for 2nd District candidate Lucas St. Clair outside of the state's Democratic Convention, Friday, May 18, 2018, in Lewiston, Maine.

LePage went on to win in November, narrowly defeating independent Eliot Cutler, despite a penchant for false and inflammatory remarks on the campaign trail that have come to color his two terms in office.

The split among voters was less pronounced when LePage won reelection in 2014, defeating Democratic Congressman Mike Michaud and Cutler once again.

But many observers believe fears over another potential split changed the dynamic of the contest, creating a virtual primary between Cutler and Michaud as they competed for the center-left electorate.

LePage, meanwhile, largely stayed out of trouble and won more votes than he did in 2010.

Maine Republicans view ranked-choice voting as an existential threat and have filed several court challenges, including one that attempted to block Maine election officials from implementing the system in June.

Republican lawmakers also blocked a bill that would have provided funding to the secretary of state to setup the law and provide voter outreach.

And LePage refused to allow the Maine State Police to collect ballots from the state's 500-plus municipalities in the event a ranked-choice count is required at the capitol.

The move prompted Dunlap to hire a private courier service.

Meanwhile, voter education has been largely left to town clerks and Dunlap's office.

The four Republican candidates running for governor have taken their resistance further, suggesting that they might challenge next week's election result in court if the ranked-choice tabulation method ultimately determines the winner.

"Ranked-choice voting is a scam," said GOP candidate Mary Mayhew. "It's going to undermine the integrity of our election process."

State Sen. Garrett Mason, who is also running for governor, has said repeatedly that the system is designed to prevent true conservatives from ever winning a statewide race.

The rhetoric has spurred speculation that more lawsuits await the results of the primary election.

But its fate could largely be determined by voters who identify as partisans, and less so by the state's biggest voting bloc: independents.

On June 12, every registered Maine voter will have a chance to vote on a people's veto question that asks all Maine voters if they want to overturn a law that will repeal ranked choice if a constitutional amendment to allow it to be used in all statewide races isn't enacted by 2021.

But while all voters will have a say in the people's veto outcome, how many unaffiliated voters will go to the polls in June?

Maine primary elections are essentially taxpayer-funded party elections in which voters who register with a particular political party are the only ones allowed to vote in primary contests involving gubernatorial, congressional or legislative candidates.

It's unclear if the fate of the system will be enough to turn out independent voters, but supporters of ranked choice aren't leaving anything to chance.

They have waged a full campaign to drive turnout and have run ads featuring actress Jennifer Lawrence to help.

So in addition to being the high-stakes debut of ranked choice voting, voters will have to determine whether they want to keep the system in place this November and beyond.