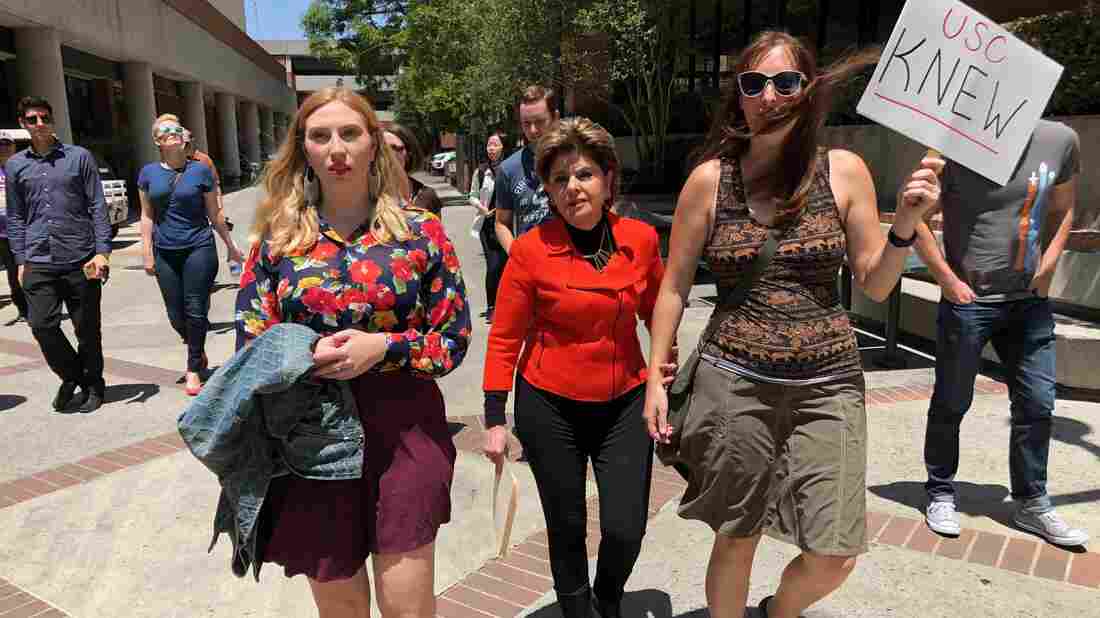 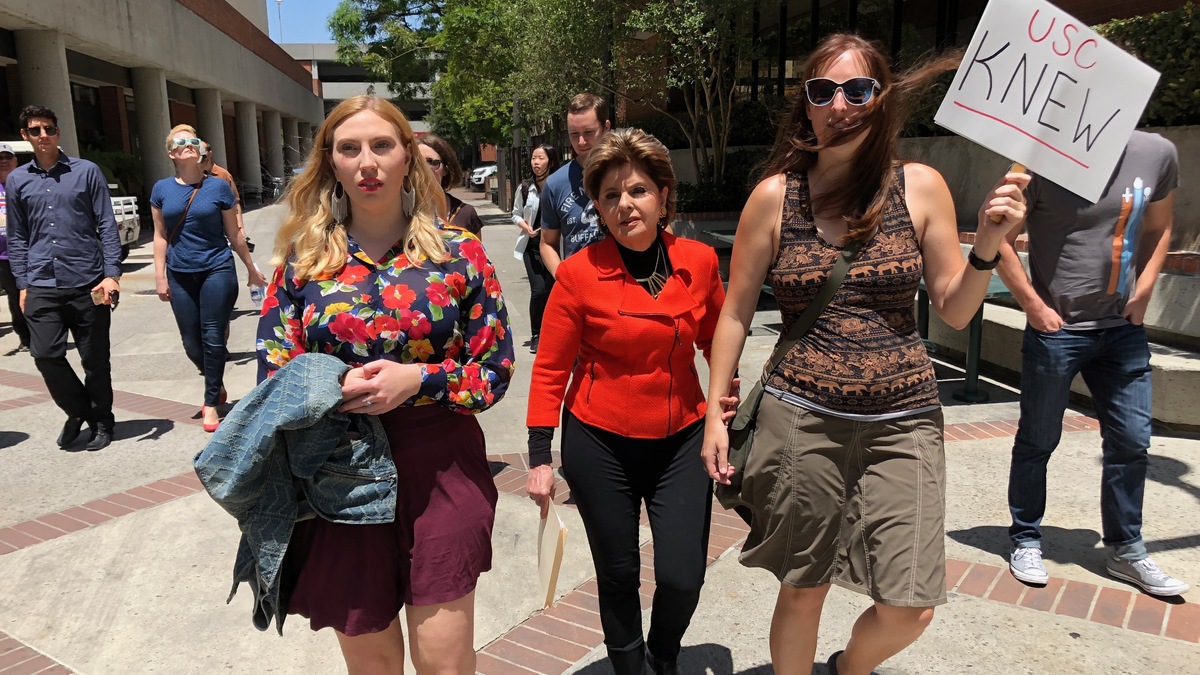 Attorney Gloria Allred, center, marched with students and alumni at USC on Saturday.

Tyndall is the former university gynecologist accused of sexually inappropriate behavior with students during their medical exams. The Los Angeles Police Department is now investigating 52 complaints about Tyndall, which range from unnecessary touching in the course of pelvic exams to inappropriate sexual comments.

USC faculty, alumni, staff, students, and even the Chinese consulate have been increasingly demanding accountability from the university in how it handled the case of Tyndall.

On Saturday, about two dozen University of Southern California students and alumni marched from the school's student health center to the university's main quad chanting "USC transparency." They called for help for Tyndall's alleged victims and a full accounting of USC's possible role in covering up his actions.

"We are at a breaking point," alumna Viva Symanski, who alleges Tyndall sexually abused her, said at a podium. "Things have to change. USC must change."

Last summer, in a confidential deal, Tyndall was allowed to resign from the university with a financial payout. USC didn't report the allegations against Tyndall to state medical authorities, nor did it inform his patients. His alleged sexual misconduct is thought to have gone on for years — he worked at the school for nearly three decades before his suspension in 2016.

"I think the university, as much as I love it, was extremely complicit in this," said Ariel Sobel, a USC graduate who helped organize the march. She's the co-founder of Justice for Trojans, a group trying to help women who say they were abused by Tyndall.

Chinese students at USC are particularly concerned about the allegations against Tyndall.

In recent years, the university has aggressively recruited students from China. About 5,500 are currently enrolled at the school.

"We Chinese students we come from a relatively conservative culture," said Andy Zhang, a sophomore and member of the Chinese Student Association.

Zhang explained students from China who were Tyndall's patients might be reluctant to report sexual misconduct because of language issues and cultural differences.

"It could be more difficult for our students, when they run into uncomfortable situations, it can be difficult for them to speak out," said Zhang, who went on to say Chinese student groups are reaching out to possible victims to offer assistance.

Meanwhile, the Chinese consulate in Los Angeles has demanded a full investigation by USC into Tyndall and possible abuse of Chinese nationals by him.

Pressure on the university is also coming from USC's faculty and staff. After 200 of them signed a letter demanding the resignation of school president Max Nikias, he stepped down last month.

"So it's happened once and I think the issue now is to make sure that it doesn't happen again," said LaVonna Blair Lewis with USC's Sol Price School of Public Policy.

What are we going to do to make sure that we're not having this same story being told with different names?

Echoing others on campus, Blair Lewis says she believes in recent years the university has been too focused on fundraising and boosting its place in academic rankings instead of protecting students. She hopes priorities now change.

"And, again, what are we going to do to make sure that we're not having this same story being told with different names?" said Blair Lewis.

USC didn't respond to a request for an interview. Instead it sent a statement about measures it is taking to protect students. These measures include educating students seeking gynecological services about their rights and how to report complaints.

The school has also established a hotline and started an investigation into Tyndall.

The LAPD has launched its own investigation into dozens of cases involving Tyndall. The university also faces a growing number of lawsuits, including from celebrity attorney Gloria Allred. This week, she said, she'll add more than 20 additional plaintiffs to a suit she's filed against USC.

"It should not have taken decades for these women to finally be protected," said Allred.