Accessibility links
The Strange, Subdued Catharsis Of Kanye And Cudi's 'Kids See Ghosts' Kanye West and Kid Cudi's first joint album is stirringly reminiscent of each man's creative peak, but somehow lacks the luster or beautiful oddity, of what this moment should feel like for rap fans. 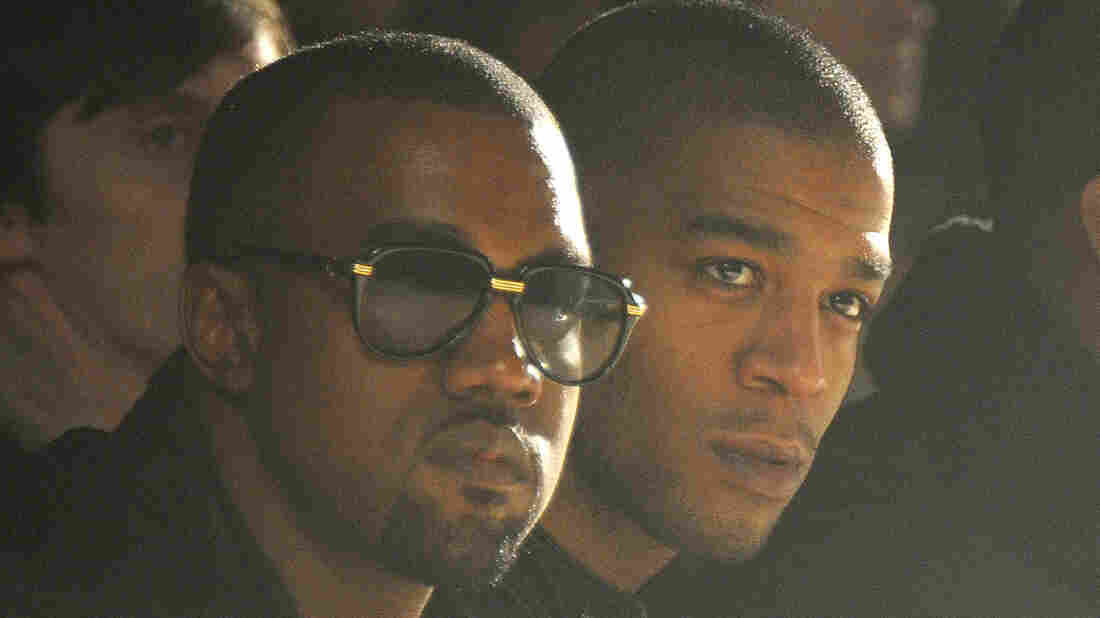 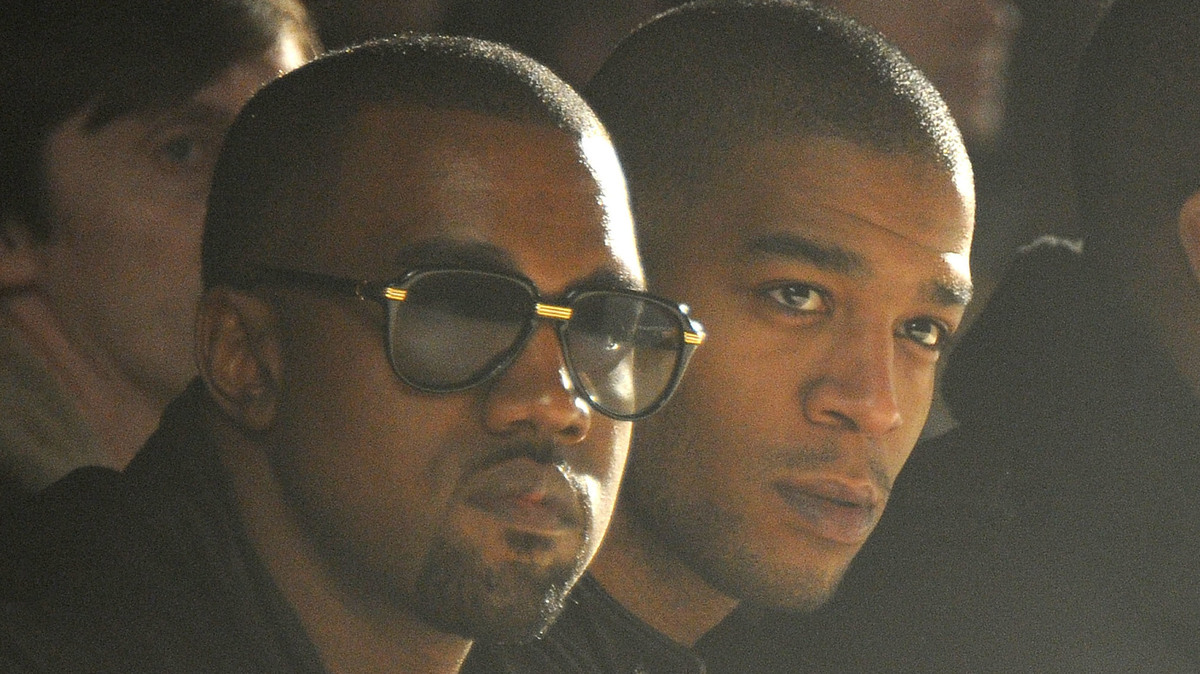 Kanye West and Kid Cudi's debut joint album Kids See Ghosts is perhaps the strongest of the albums West has produced and released in 2018.

In late 2016, Kanye West and Kid Cudi both sought out help. Cudi checked into rehab for "depression and suicidal urges" in the middle of his album rollout for Passion, Pain and Demon Slayin'. Kanye was admitted for psychiatric observation that November, after two rant-dominated concerts that were followed quickly by the cancellation of his Saint Pablo tour. It was apparent to the pair's overlapping fanbases that their internal pain, of which both had been vocal about dealing with on past albums, had begun to drown them. More recently, Cudi has remained reclusive while Kanye has decidedly not, taking up life-coaching via Twitter and further aligning himself with President Trump.

Ye and Cudi's joint album, Kids See Ghosts, released this past Friday, is a cathartic album for the pair, and one that's been anticipated for 10 years. Apparently, catharsis never quite feels how you'd expect it to. The album's seven songs are stirringly reminiscent of each man's creative peak, but somehow lack the luster, or maybe the beautiful oddity, of what this moment should feel like.

2-Sided: Trying To Hear Kanye West's New Album, 'ye,' Through All The Noise

When West announced this past April that he'd be executive producing five albums for consecutive release over as many weeks, Kids See Ghosts was the only one of them that had no precedent. Unfortunately, what transpired between then and now — a reignited rap beef thanks to DAYTONA and a chaotic spectacle in Wyoming for Kanye's equally chaotic spectacle of a solo album — nearly made fans lose sight of the hip-hop sanctity of Kids See Ghosts. For fans who've watched Cudi and Kanye's relationship evolve from 2008 — from mentor and protégé to adversaries to equals — the announcement of the pair's joint effort was supposed to be a dream-team rap fantasy come true. In the aftermath of ye, an album currently atop the Billboard 200 but also a mid-year front runner for most polarizing project of 2018, Kids See Ghosts acts as a bewildered fan's contextual roadmap, providing some clarity for ye and giving an update on Cudi's mental state. 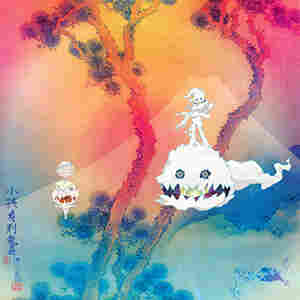 The album's third song, "4th Dimension," samples gospel singer Shirley Ann Lee's "Someday" (also sampled on ye's "Ghost Town"), featuring Lee's producer stating that no song should be over three minutes long ("You only want two and a half minutes, three minutes maximum"), a nod to the 'all killer no filler' seven-song structure Kanye's forcing on the five albums announced in April, of which two remain. On "Ghost Town," Cudi provides supporting vocals as 070 Shake, one of G.O.O.D Music's latest signees, bellows about burning her hand on a stove, connecting her visceral pain to a sense of self-controlled freedom. On Kids See Ghosts' "Freeee (Ghost Town Pt. 2)," Cudi and Kanye's declarations of freedom erupt into an all-out rebel yell: "Nothing hurts me anymore / Guess what, baby? I feel freeeee." The proclamation is set to a soaring electric guitar riff from Mr. Chop circa 2008, but reminiscent of fuzzed-out psychedelic rock of the '70s.

That freedom is central; both Cudi and West discuss their journeys with depression and drug use throughout, and there are moments where Kanye's recently revealed bipolar diagnosis is put into words: "I was off the meds, I was called insane / What an awesome thing, engulfed in shame." And as someone who has always shared his recovery or backslide, Cudi's search for the light as a "lost boy caught up" in darkness is a continuous, relatable arc.

Alongside confessions, another road to both liberation and protection for both — religion — is woven into six of the project's seven tracks (the only exception being "Feel The Love"). Heaven is referenced six times, Kanye describes having a Bible on his nightstand, and 'God' and 'Lord' are mentioned a combined 32 times: "Lord shine your light on me, save me, please." The two men are battling their demons in real time — literally, as West posted yesterday — and finding solace in a higher power. The clear highlight of the album's 23 minutes is "Reborn," a mantric spiritual session about pushing through life's darkest moments. "At times wonder my purpose / easy to feel worthless / But peace is something that starts with me," Cudi muses. Melodic sermons from Ty Dolla $ign, Yasiin Bey and Anthony Hamilton layer on the spiritual presence.

Despite the clear connections between ye and Kids See Ghosts, the latter is the far superior project in terms of sequencing, lyrical content and intent. Where ye felt thrown together (again, in real time) — jumping from fears of his daughter hitting puberty to praying for Russell Simmons because he got "MeToo'd" to reminding listeners of his "slavery is a choice" moment — Cudi's verses ensure Kids See Ghosts maintains a clear vision, documenting his crawling and clawing out of depression's depths.

But while West has helped craft a more cohesive palette for Cudi — able to masterfully spin a jolly Christmas song (Louis Prima's "What Will Santa Claus Say?") into a creepy chorus and lay the perfect bass and synths over an overlooked Kurt Cobain guitar riff, giving shape to Cudi's grunge-rock dreams — his turns behind the mic are more often distracting, or at odds with Cudi's vision. The ghost of old Kanye still lingers in the production, but where Cudi's words, and his signature lower-register humming, possess an air of genuine emotional purge, Ye's corresponding verses come off as phoned-in and at times unnecessary; on "Feel The Love" (elementary gun noises for nearly two minutes straight) or "4th Dimension" (rapping about accidental anal sex) are distractions. Kanye's verse on gun violence and mass incarceration in "Cudi Montage" is probably the most socially aware piece of lyricism, but still manages to come off as didactic.

Kids See Ghosts is many things — most notably, the best album in Kanye's summer 2018 series so far. But what it is not is a recreation of 808s & Heartbreaks or the now-fabled Man On The Moon III that some expected from Cudi. It's catharsis on the strangest of terms, and, amidst the confusion of MAGA-hat Kanye, a consolation prize for putting up with him.