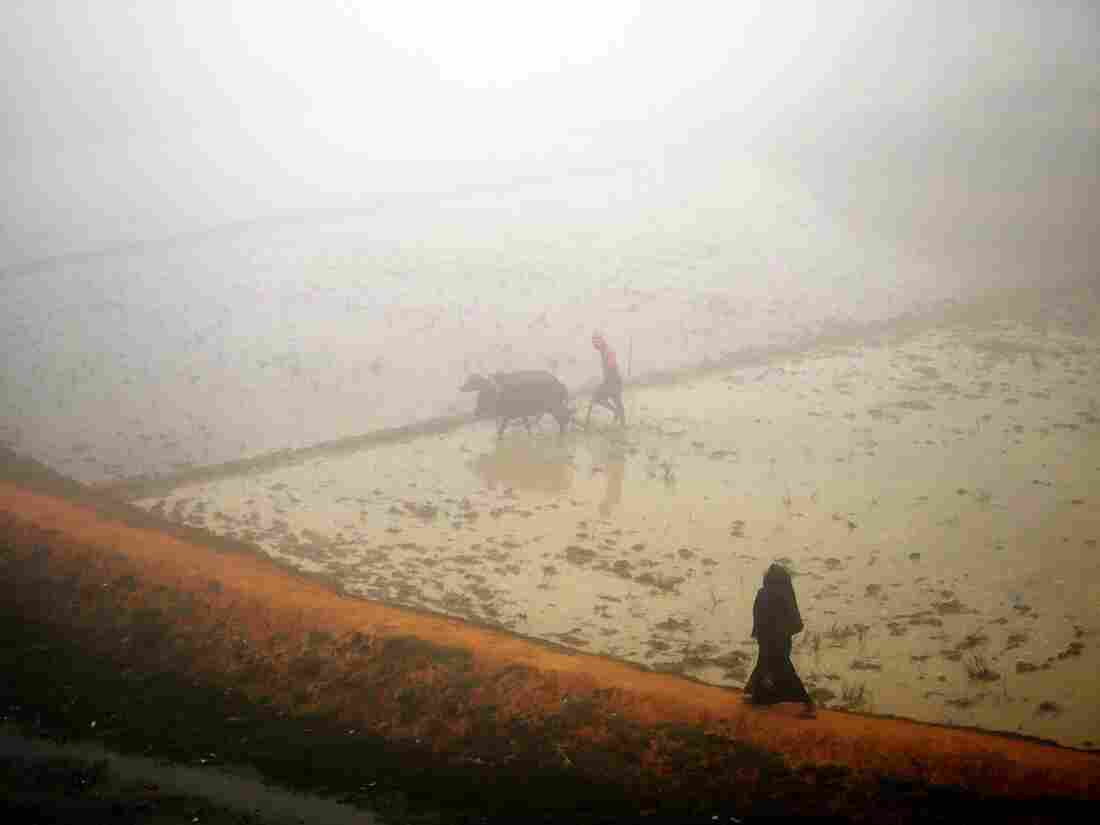 A Rohingya woman walks past a flooded farm near the Kutupalong Refugee Camp in Bangladesh, where the monsoon season started in June and has caused casualties and landslides. Jana Cavojska / SOPA/LightRocket via Getty Images hide caption 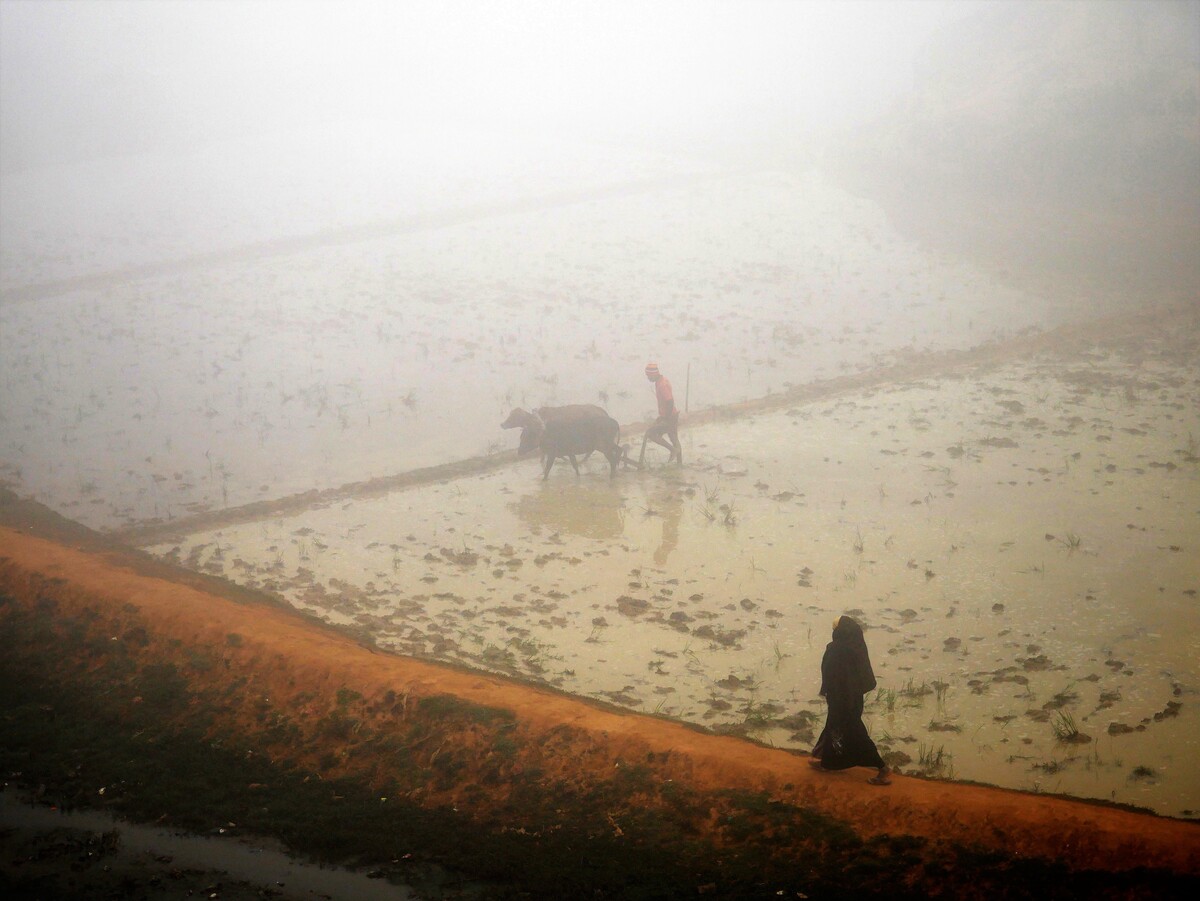 A Rohingya woman walks past a flooded farm near the Kutupalong Refugee Camp in Bangladesh, where the monsoon season started in June and has caused casualties and landslides.

Monsoon rains set in over the weekend in Bangladesh, flooding refugee camps and leading to the death of a Rohingya boy, who died when a mud wall of his shelter fell on top of him, according to media reports. His mother also was injured in the collapse.

Hundreds of thousands of Rohingya — a persecuted Muslim minority — have been living in makeshift shelters of earth, bamboo and plastic. Their homes are huddled on steep hillsides in southeastern Bangladesh that have been cleared of vegetation.

Some 700,000 Rohingya abandoned their homes in neighboring Myanmar after the Buddhist military began a campaign of rape, torture, murder and arson in August 2017. The United Nations has called it "a textbook example of ethnic cleansing." As they fled into neighboring Bangladesh, one of the largest and fastest displacement crises in modern times developed.

The monsoon season started last weekend with about 15 inches of rain and winds of up to 43 miles per hour. According to the United Nations, 37 landslides occurred and more than 1,000 shelters were damaged, in addition to infrastructure — a health facility, a food distribution site, water points and hundreds of latrines. The UN estimates that 11,000 people have been affected so far.

"We all knew the monsoon was coming, but the last three days are the most intense storms I've seen," Daphnee Cook, spokesperson for Save the Children's Rohingya response, told NPR from the Cox's Bazar district. "It's astounding how quickly the clay ground has turned into thick mud."

Cook said she has passed by crying children and people traveling in boats. A key access point into the Kutupalong refugee camp was blocked off, so Save the Children teams had to enter the camp on foot. Some of the organization's learning centers, where children are taught math, Rohingya language and life skills, temporarily have been shut down.

Rick Brennan, director of emergency operations for the World Health Organization, told NPR that preparatory measures have been taken. Containers filled with essential health care supplies and medicine have been scattered throughout the camps, for instance, in case flooding prevents vehicles from replenishing clinics' stocks.

Punishing rains in the Rohingya refugee sites today. @UNHCR_BGD , with partners, working in support of Bangladesh Govt, helped to move more than 20 families at high risk of landslides to safer areas; but thousands more still at risk and need to be relocated. #WithRefugees pic.twitter.com/TOLVVqh97a

In the weeks leading up to monsoon season, engineers were flattening out hills to prevent landslides and limit flooding. Aid organizations helped people fortify their homes, and hundreds of emergency shelters were built in one week alone. Some Rohingya refugees volunteers have been trained to assist disaster responders in storms, according to the UN.

But the rains continue to fall. It is only the start to the monsoon season, which lasts until October.

"The situation in the camps is growing more desperate with every drop of rain that falls," said Manuel Pereira, the emergency coordinator for the International Organization for Migration said in a statement. Because people built their shelters on land that lacks vegetation to hold the ground firm, "people and their makeshift shelters are being washed away in the rains." 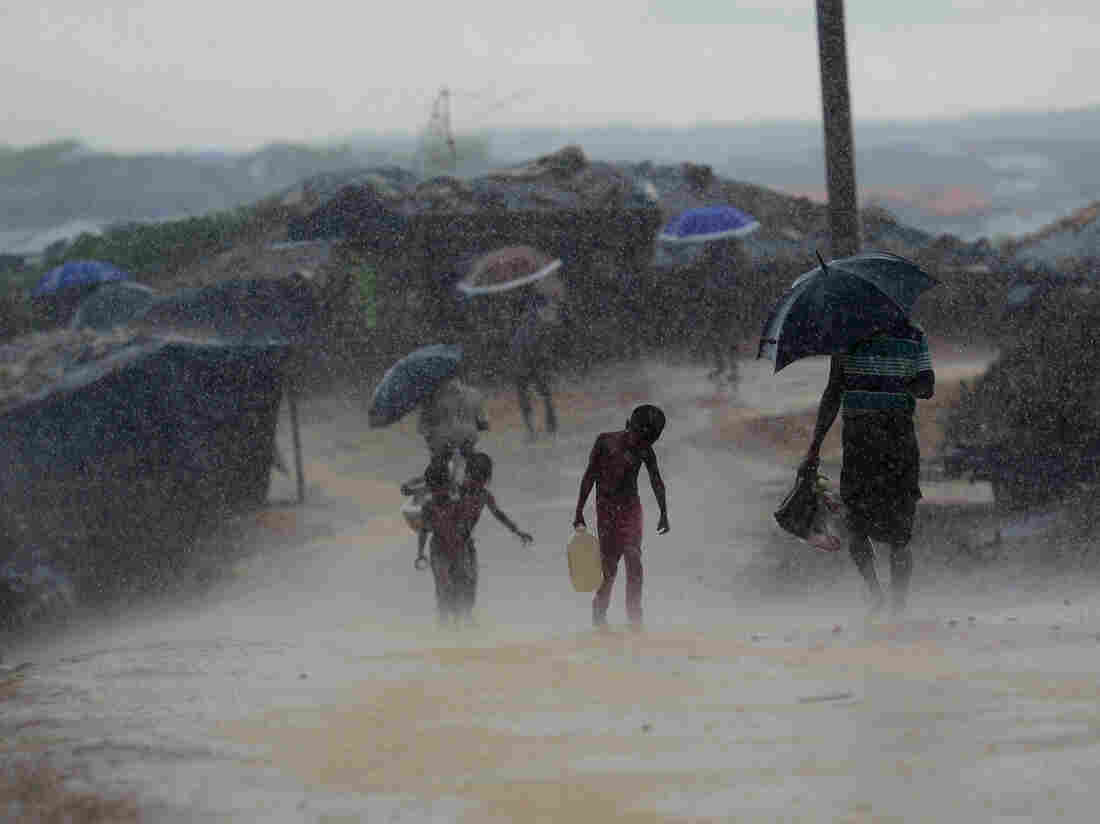 A Rohingya child carries water through a rainstorm at a refugee camp in October 2017. Munir Uz Zaman/AFP/Getty Images hide caption 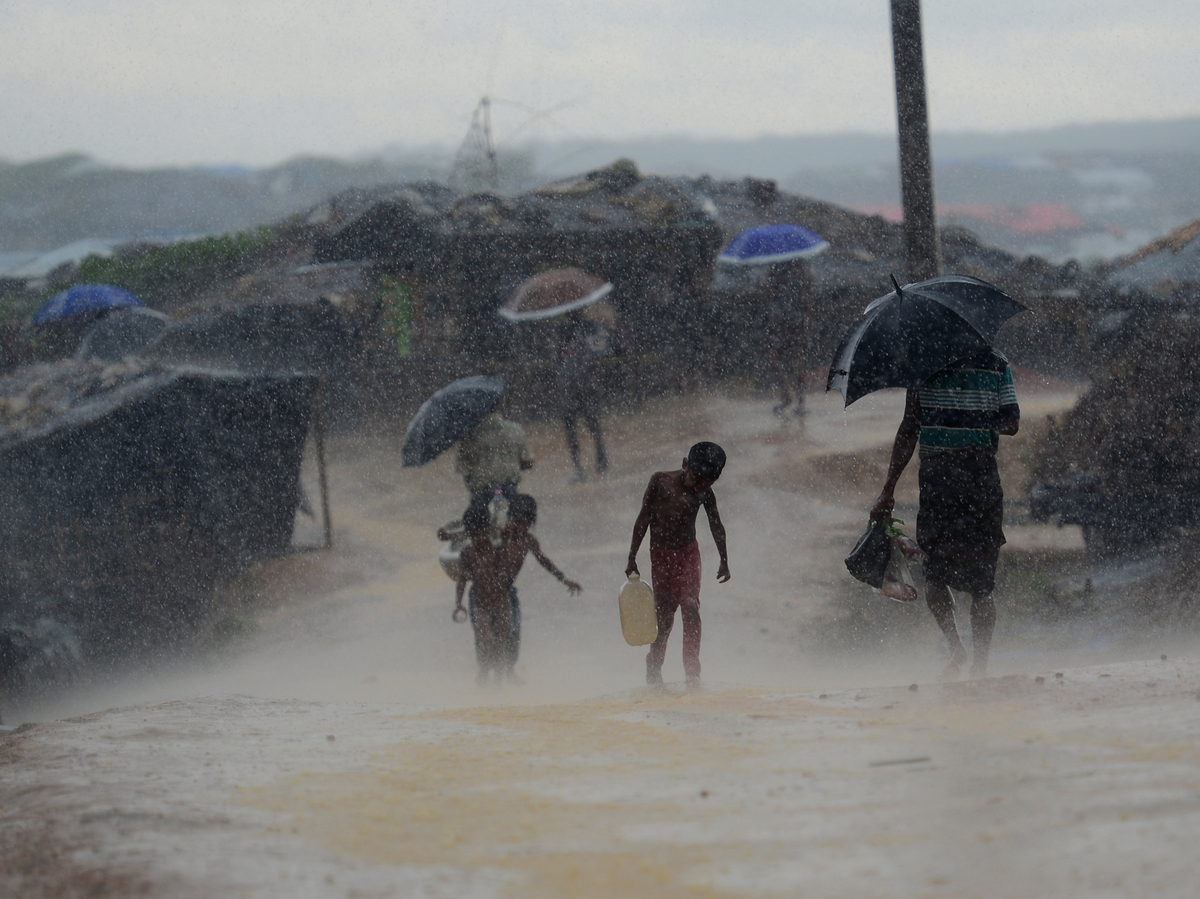 A Rohingya child carries water through a rainstorm at a refugee camp in October 2017.

With flooding comes the risk not just of landslides but infectious diseases, especially ones that cause potentially fatal diarrhea.

Brennan said that some 985,000 people — mostly Rohingya refugees but also some local Bangladeshis — have been vaccinated against cholera. Rotavirus, dysentery, typhoid and E. coli remain a concern.

"The good news is there has been no significant increase in disease, but we're watching it," Brennan said, adding that poor water quality and sanitation — shallow wells, dugout latrines — make refugees more vulnerable to water-born diseases.

In March, the UN's Joint Response Plan for the Rohingya humanitarian crisis requested $951 million to help 1.3 million people (more than 880,000 refugees and 330,000 Bangladeshis). Just 21 percent, about $200 million, has been provided, according to the UN. That has left aid organizations and international agencies with an even more daunting task.

"The international community in my view has really let the Rohingya and the Bangladesh people down," said Brennan. "The Rohingya are among the most vulnerable people on the planet."