Accessibility links
In 'Incredibles 2', Fresh Action, Stale Humor The action of this animated sequel, which picks up where The Incredibles ended 14 years ago, is fresh and inventive; pity the laughs aren't. 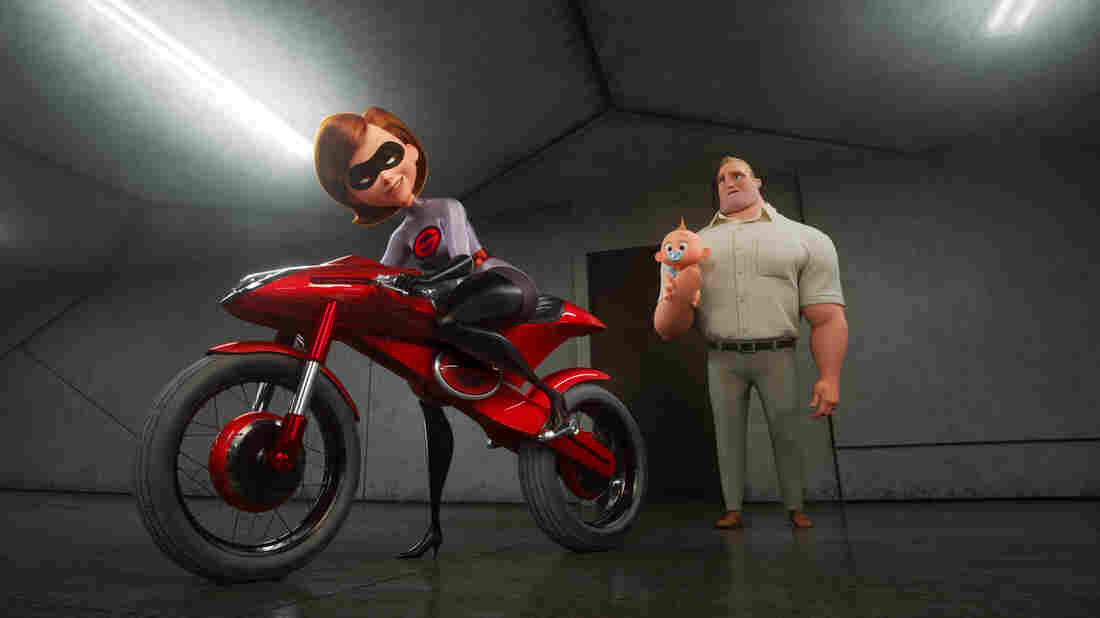 Don't Wait Up: Elastigirl (voiced by Holly Hunter) prepares to do some derring-do, leaving Mr. Incredible (voiced by Craig T. Nelson) to his stay-at-home-superdad duties, in Incredibles 2. Pixar hide caption 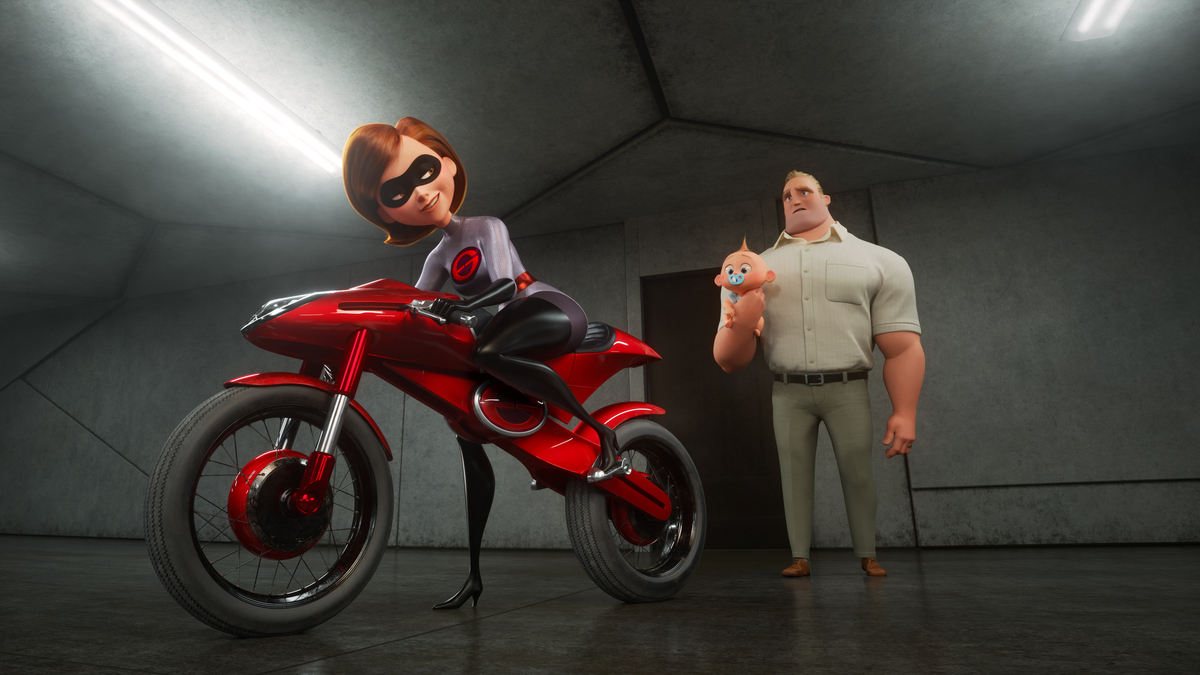 Don't Wait Up: Elastigirl (voiced by Holly Hunter) prepares to do some derring-do, leaving Mr. Incredible (voiced by Craig T. Nelson) to his stay-at-home-superdad duties, in Incredibles 2.

This is a fact — a cold, hard one. The massive, resolute, essential truth of this fact is abiding and irresistible and immovable; it possesses its own magnetic field, its own solar day.

The reasons are many and varied, and a full accounting of them is not possible within the space of a fleeting human life span. But it's useful, in considering its less-successful sequel, to remind ourselves of at least a handful of its chief virtues.

There is the design, of course, for one thing. The film was set in a clean-but-not-sterile retrofuture small-t tomorrowland, one that seemed to emerge fully formed from the drafting table of some particularly whimsical mid-century urban planner. Buildings didn't just dully occupy space, they gracefully swooped and dramatically arced. What's more, that design wasn't simply nice to look at (though it was that), it was doing important narrative work, nudging our perceptions of the film's world, supplying us with a meaningful context for its story.

That story focused on the Parr family, a super-powered clan of do-gooders forbidden from doing good by a society that looked on them with suspicion and fear. Everything about their need to conform and fit unobtrusively into an unexceptional suburban existence was informed by — and lovingly satirized — patriarchal, Eisenhower-era social norms. (Remember this bit, we'll be coming back to it later.)

There's the music, too — Michael Giacchino's score, with its anthemic trumpet-blast and cool percussive beat, stirs the blood even as it lodges, unforgettably, irrevocably, in the brainstem.

The villain of the piece proved a chillingly prophetic choice: a toxic fanboy determined to destroy the thing he once loved. Today, of course, such sullen jerks are thick on the ground, and you can't log on to any social media platform without being forced to tiptoe around furiously bubbling pits of their whiny, tarry vitriol.

But back in 2004, there were fewer of them, and they were more easily contained. Bird's decision to outfit his bad guy with the tech trappings and remote (and stylish!) secret island headquarters of a classic Bond villain was another smart, knowingly efficient gambit.

But the essential reason The Incredibles' status as Lord King of Superhero Cinema Mountain remains secure is its sure-footed awareness of how superheroes work — of what they are for.

Bob (voiced by Craig T. Nelson), a traditional patriarch, wants to protect his family through steadfastness and strength; Mr. Incredible is invulnerable and strong. Helen (voiced by Holly Hunter), a traditional matriarch, wants the same thing Bob wants, but achieves it through her limitless adaptability; Elastigirl is adaptability made flesh. Teenage daughter Violet (voiced by Sarah Vowell) wishes to be left alone; her alter ego causes literal walls to manifest around her, and she can vanish at will. Dash (voiced, in the original film, by Spencer Fox) is a ball of heedless, impulsive energy; his heroic, superfast self is impulsiveness incarnate. And baby Jack-Jack is, well, a baby — a formless blob of raw potential who displays a roster of unpredictable powers.

Think of the moment when Dash, on the run from some henchmen, inadvertently finds himself running out over a body of water — and notices, with a chuckle of delighted surprise, that he has the ability to run across its surface.

That moment, for superhero fans, is heartbreakingly pure — part wish-fulfillment, part joy, part wonder. We're a couple decades into the era of superhero cinema now, but no other film has proved capable of capturing that spry, blissful alchemical blend on a more than intermittent basis. The Incredibles, on the other hand, lives that alchemy, breathes it, speaks its language in every frame.

Incredibles 2, which continues the story of the first film quite literally, does not — and realistically cannot — feel as bracing, as miraculous, as exquisitely wrought as the first film. But all of that film's charming particulars are on hand — the design, the music, the characters (young Dash is voiced, this time out, by Huck Milner).

The villain — a mysterious masked figure known as the Screenslaver, who uses television to control the minds of hapless citizens (and heroes) — arrives with a villainous manifesto, albeit a slightly muddier one than that of the first film's nemesis. And that same conceptual muddiness, a byproduct of the sequel's need to expand on and complicate the world of the first film, seeps slowly into the entire film.

The action, however, is spectacular and fantastically inventive, whether when the heroes attempt to prevent a subterranean bank robbery, stop a runaway train or engage in any of several basic-laws-of-physics-defying high-speed chases. The story finds ways for its characters — including a handful of new ones — to use their powers in innovative ways, which is something many superhero sequels never bother to think about.

And as a work of animation, Incredibles 2 succeeds on the far-less-showy side of things; digital animation has made great leaps since 2004, necessitating some significant tweaks to the character designs. Textures are richer, so the angular, cartoony approach that made the Parrs look as if they had stepped out of a socio-realist mural in the first film is made, here, more nuanced and realistic. As a result, the character "acting" (read: gestures and facial expressions) attains a degree of breathtaking subtlety that reduces the uncanny valley to a shallow trench.

The story gives both Elastigirl and Violet far more screen time, and character development, than they received in the first film: Hunter's Helen/Elastigirl gets tapped to become the public face of "supers" and clocks serious field time (one of the film's singular joys lies in watching her relish her heroic life so thoroughly), while Violet deals with the repercussions of her high-school crush forgetting her entire existence, thanks to a government-sanctioned mindwipe.

The film's laughs, however — of which there are, it must be said, many — feel far less fresh than its action set pieces. The humor is firmly rooted in these characters, as it should be, but it's here that the movie's setting — so clean and and clarifying in the first film — gets in the way.

There's a visual and thematic tidiness to placing a story in a retrofuture setting, especially to the extent it serves to underpin the traditional roles assumed by the members of the Parr family: Dad as breadwinner, Mom as she-who-vacuums, etc.

But it comes at a cost.

Where the first film was content to draft on '50s and '60s visuals as a kind of handy conceptual shorthand, it didn't expect us to believe its events took place during that time or that characters in this fantasy setting were constrained by gender politics of that real-world era. Yes, we often saw Helen flirt with quaintly domestic June Cleaver iconography — feeding the baby, doing laundry — but the script, and Hunter's performance, made it clear that when it came to superheroic chops, her husband was a blunt instrument, while she was an entire precision surgical kit. (Resolved: Mr. Incredible is and has always been Elastigirl's sidekick. Break into response groups to discuss and meet me back here in 15.)

That remains true in Incredibles 2, but only during those scenes when Helen's on her own, kicking butt and taking names. Most of the film's second act is powered, if feebly, by the putative hilarity of watching Bob — the Dad! -- bluffly insisting he can take care of the kids — the Dad! Imagine! — and failing in a variety of spectacular ways. In fairness, he does have a lot to contend with — baby Jack-Jack will easily prove the breakout star of this film. This is thanks in large part to a hilarious backyard fight scene, which is a good deal more an anarchic and violent and risky than the film around it, and wears Bird's affection for Chuck Jones-era Looney Tunes on its sleeve.

The film's eagerness to nudge us in the ribs with stale, TGIF-lineup-sitcom jokes about Bob's haplessness in the face of domestic responsibilities is an outgrowth of its retrofuture setting, of course. But in the previous film, such gags were a wink to the audience that faded into the background iconography, into the whole gestalt of the thing. Here, they're front and center, and they're hopelessly hacky, and just ... puzzling. Really? you think. This? Still?

It's by no means a deal-breaker, though, because once again, the action is fittingly spectacular, the music is great, and the whole thing looks fantastic. Plus! The new heroes we meet are fun, the character voiced by Catherine Keener is wonderfully suited to that actress, and Holly Hunter brings grit and heart and intellect to her portrayal, as is her usual, but no less amazing, wont.

Plus, not for nothing, Edna Mode is back (once again voiced by Bird) and in fine form. In the public imagination, that character's contribution to the success of this film has been reduced to her catchphrase ("No capes!"). But she is one of the best things in two films that are filled with great things, inasmuch as she serves to bring their troubling, much-discussed, pseudo-Randian subtext — namely, that a select few possess a greater inherent value than the teeming masses — into the light ...