Accessibility links
Raccoon Is Rescued Atop Building In Minnesota, After Capturing Fans Worldwide The little creature climbed about two dozen stories of a St. Paul high-rise in pursuit of — well, that's still a little unclear. But the now famous climber is safe after reaching the roof. 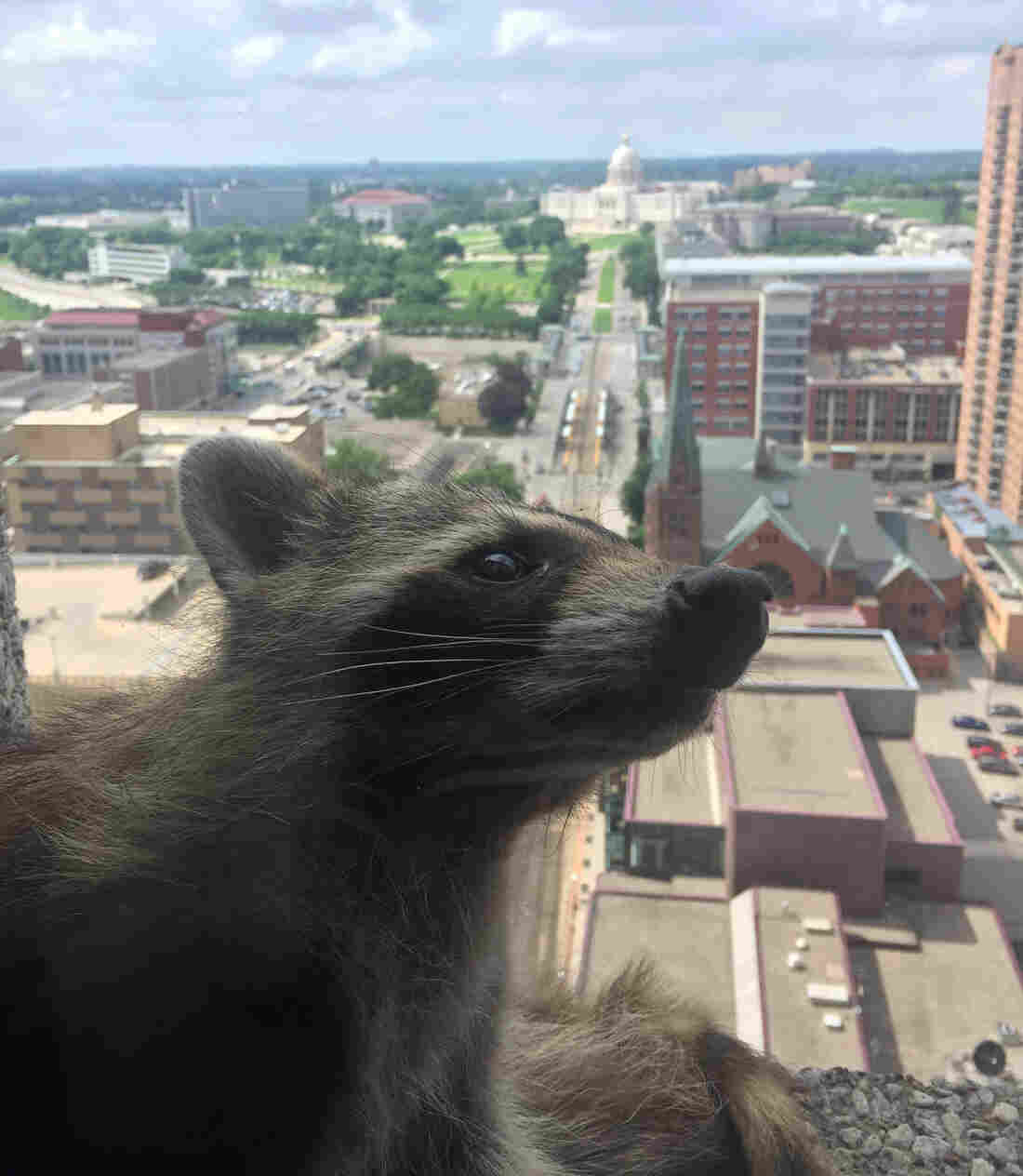 With the Minnesota State Capitol in the background, a wily raccoon scampered on ledges more than 20 stories high this week. Sheila Donnelly-Coyne/Paige Donnelly Law hide caption 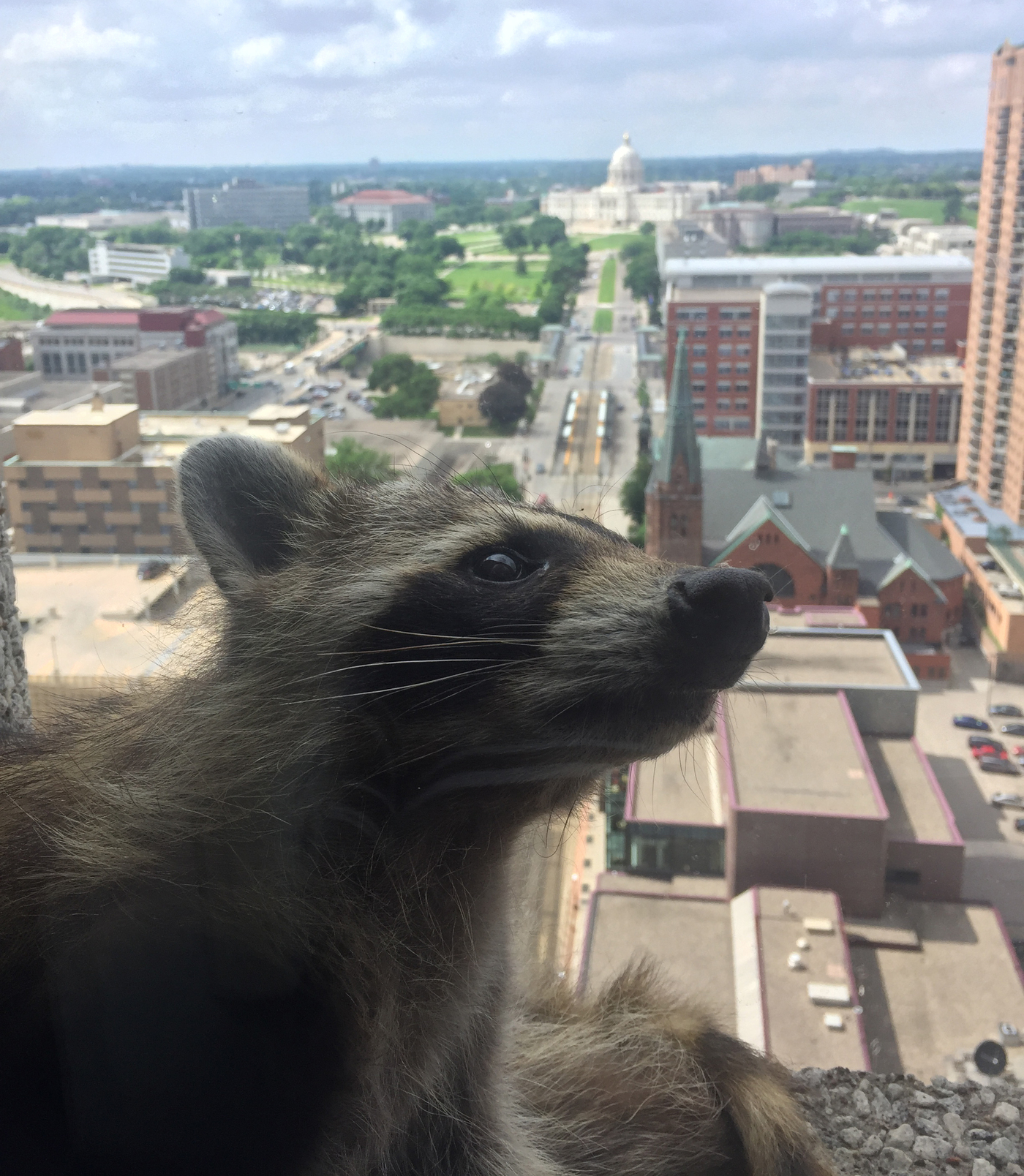 With the Minnesota State Capitol in the background, a wily raccoon scampered on ledges more than 20 stories high this week.

For hours, her life was like a highlight reel of daring stunts and escapes — but now, a raccoon that mesmerized people by climbing a tall building in St. Paul, Minn., has been trapped and is safe.

"In our office we are just glad he is safe. We were all worried about him," said Sheila Donnelly-Coyne, an attorney whose firm, Paige Donnelly, is on the 23rd floor of the UBS building. (It was later determined that the critter is female.)

Raccoon Vs. Skyscraper: The Summer Blockbuster You Never Knew You Needed

The raccoon was spotted more than 20 stories above street level, in a downtown escapade that our colleagues at Minnesota Public Radio tracked closely — she was, after all, just across the street from them, giving them front-row seats as the animal avoided death and capture with equal aplomb. 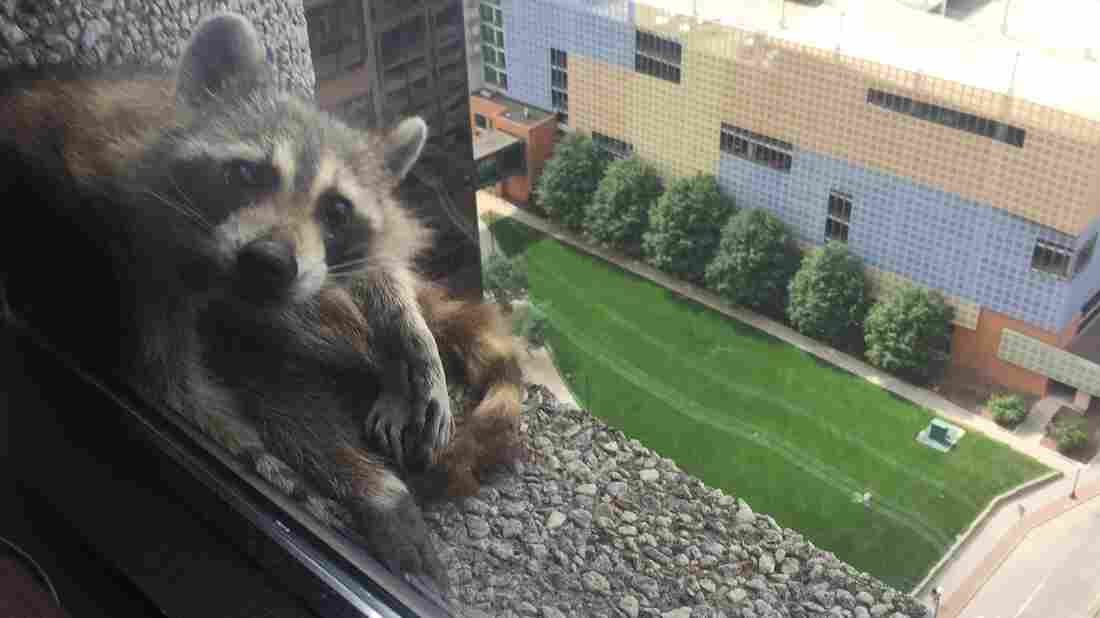 The #mprraccoon peers inside a law firm on the 23rd floor of the UBS Bank building on Tuesday. The animal has been captured. Sheila Donnelly-Coyne/Paige Donnelly Law hide caption 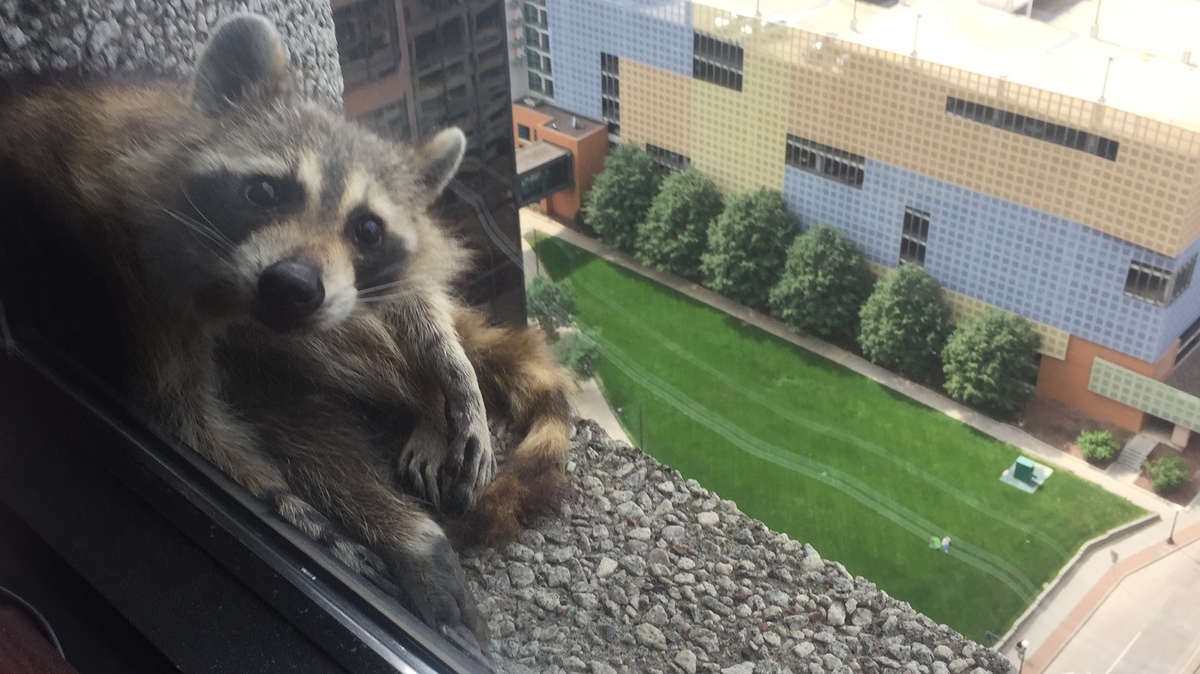 The #mprraccoon peers inside a law firm on the 23rd floor of the UBS Bank building on Tuesday. The animal has been captured.

Dubbed the #mprraccoon on Twitter, the raccoon drew thousands of breathless observers as she scampered, scaled and explored her unlikely high-rise habitat. Her occasional naps were followed closely, analyzed for clues about her mental state, hopes and dreams.

St. Paul Mayor Melvin Carter spun her adventure as a positive for the city's tourism industry — proof that even a raccoon knew Minnesota's capital "is a great place to reach for higher heights."

Meanwhile, tensions were reaching such great heights of their own that a local Good Samaritan roughly two dozen stories below the raccoon even offered — rather ambitiously — to catch the little one.

Here it is, #MPRRaccoon’s valiant climb to the top of the UBS Center in Downtown St. Paul, this morning. @KARE11 @MPRnews pic.twitter.com/ot1DPNeRF5

Happily, no such extreme measures were necessary.

Folks with the UBS Plaza announced Wednesday morning that the raccoon had reached the roof overnight, grabbed a snack of soft cat food and found herself trapped in one of the cages laid out for her there.

The building's management hired the local Wildlife Management Services to trap the raccoon. The group says it then brought the tiny hero's cage to a private residence in the suburbs outside the city — where, after consultation with the Wildlife Rehabilitation Center of Minnesota, the raccoon was released Wednesday afternoon "with permission from the homeowner."

Wildlife Management Services posted video of the release, which shows a rather reluctant raccoon eventually dashing off into the wild green yonder.

But one question remains: What inspired her Alex Honnold-like heroics? Probably something pretty mundane, frankly.

Before she became an online sensation, the #mprraccoon was likely looking for food in a lower skyway, Tim Nelson of MPR News reported. He said the animal had been stranded on the building for at least two days.

At any rate, she's safe now. Celebrate the feat with this little supercut of the raccoon's great upward scamper, courtesy of Alicia Lewis of local NBC affiliate KARE.