Accessibility links
A.M. Homes: Short Stories Are 'Food For The Soul And For The Mind' Her first story collection in 15 years is called Days of Awe, and it covers everything from a chat room for bird lovers, to a summit on genocide, to a superstore where someone's abandoned a baby. 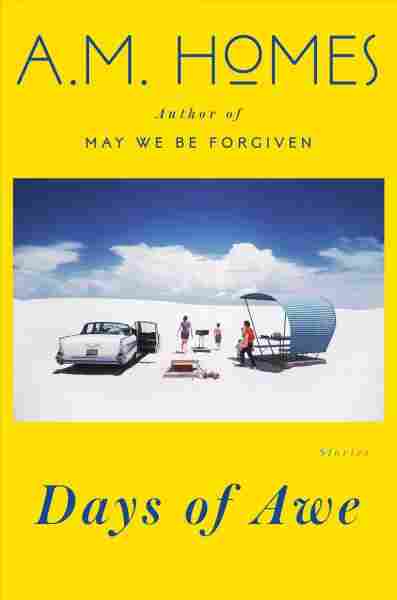 A chat room for bird lovers. A summit on genocide. A superstore where someone's abandoned a baby. These are the settings for just a few of the short stories in A.M.Homes' new collection, Days of Awe — her first in more than 15 years. "I think there's a compression to short stories, and a kind of sense that there's something already happening by the time you get there," she says. "I describe it as, the train has already left the station, and the reader comes in, say, in Chicago. And that's very different from a novel that has a long, sort of unfolding, pastoral approach to storytelling."

I'm definitely, if not obsessed by that, I think there's a big gap between who we are publicly and how we present ourselves, and who we are to ourselves and our families. And most interesting to me over the last ten years is also who we are in our online lives, that we can have these either avatars, or sort of other personas in our exchanges, or even the ways there's different tones to our emails. So I am deeply interested in that split between public and private self.

I think my understanding of dialogue really comes from the theater. I grew up in Washington, D.C., going to plays at Arena Stage all the time. So it was really the work of Edward Albee and Harold Pinter and Arthur Miller that gave me a sense of dialogue. And in this case, the thing was, how do you represent these two main characters, plus what I almost think of as the chorus around them, which is the other people who are witness to their conversations, and in ways that are cryptic and condensed, and almost like a Morse code for communication.

I'm always listening, and I think there's that interesting difference between what you actually hear people say, and how we account for that on the page or on the stage, and those compressions that have to happen. I think Edward Albee was just so truly brilliant at that.

On Albee and writing about the breaks in tense relationships

'May We Be Forgiven' Blames The Online World

I'm interested in those shifts or fractures in things, and it's interesting because he was a mentor to me, and he was somebody I knew throughout my life. And Edward, like me, was also adopted, and we talked a lot about that outsider experience and what that perspective was, but also shifts in emotional states, and that sense of ambivalence about relationships. It's very hard, I think, for someone who's grown up feeling that their existence was some how temporary, or that they could be given back at some point, to attach easily. So there's a lot about attachment in the stories, always.

On writing stories about people and relationships

I think throughout history, there have always been wonderful stories about couples and families — I mean, that is the stuff of life. And the nice thing is, they come in what I call doses. You know, you can read one story, you don't have to read a whole book of stories at a time. So you read one or two, and then they sit with you for a while. I think they're a medication. Literally, we're living in such complicated times that if you can sit down and read a story, or two stories, depending on what you need, it's food for thought but it's also for the soul and for the mind, to see life reflected back to you in a way that is both funny and moving and complex.

This story was edited for radio by Jolie Myers, produced by Justine Kenin, and adapted for the Web by Petra Mayer.