Accessibility links
Wildly Uneven 'Superfly' Strives To Take The Anti- Out Of Its Antihero The revamp of the classic low-budget 1972 flick Super Fly softens that film's main character and careens between tones "like a Cadillac Fleetwood Eldorado that's had its brake lines cut." 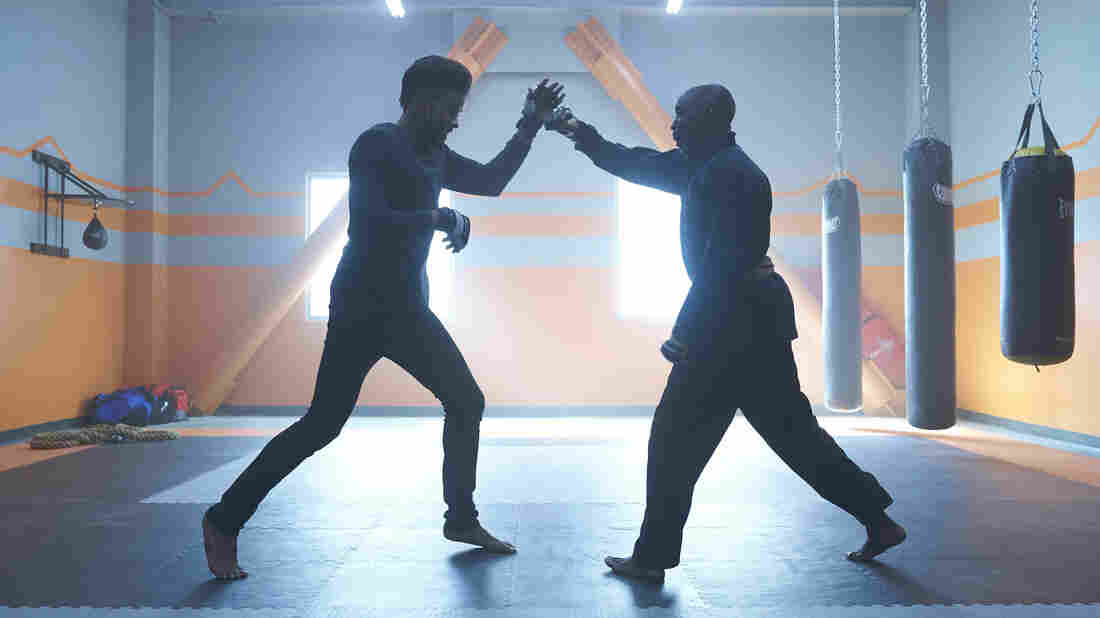 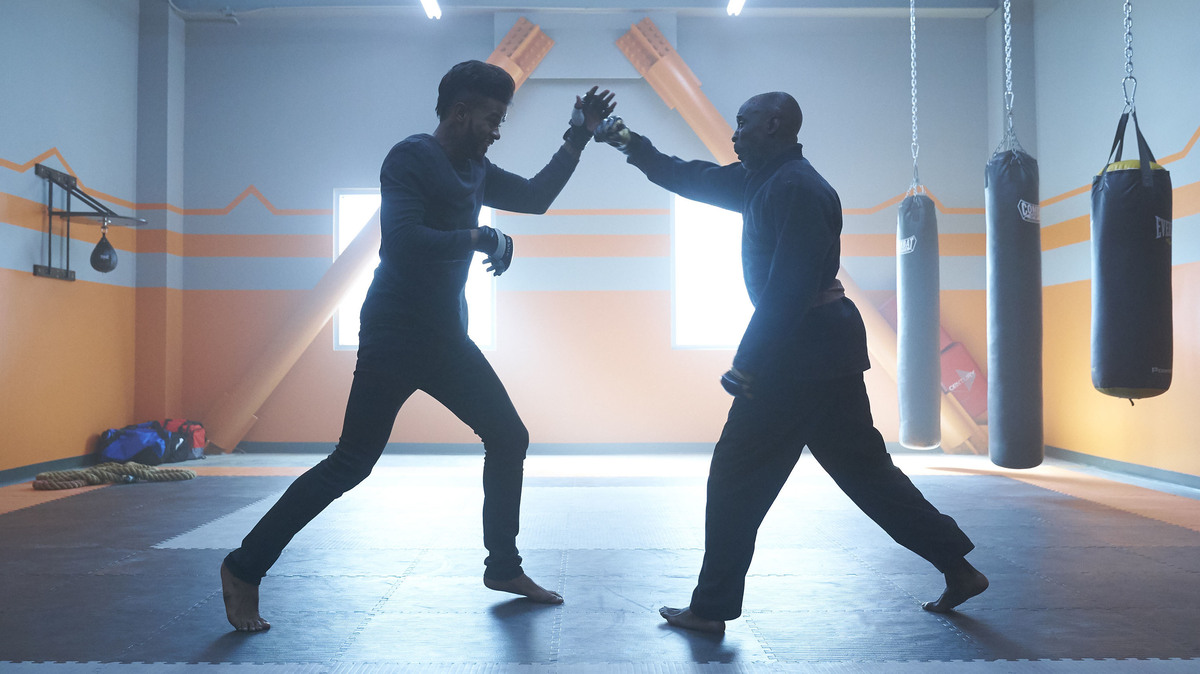 Inflation was brutal in the '70s, so it's no surprise that everything in SuperFly — a glossy update of Gordon Parks, Jr.'s gritty 1972 blaxploitation landmark Super [spacebar] Fly — is exponentially bigger. The original was a cinéma vérité quickie; nothing else in it was as memorable as Curtis Mayfield's funky soundtrack, or the still-photo montage documenting mid-level drug dealer's Youngblood Priest's operation over Mayfield's song "Pusherman." For all its antihero's coke-spoon-on-a-gold-chain swagger, Super Fly was a humble affair. Its big finale is a fistfight that lasts maybe one-third as long as its bathub sex scene.

Back then, the notion of a movie about a criminal — particularly a nonwhite one— who gets away with it still felt new. (Super Fly followed The Godfather into theaters by just a few months.) In the gangster pictures and films noir that predated blaxploitation, outlaws were usually punished for their transgressions, whether it was karma or just the Production Code.

Well. Superfly '18 relocates the action from New York to Atlanta, and reassigns soundtracking duties to Future. Oh, right: Hip-hop has happened in the 46 years since Super Fly Mk. 1. So has New Jack City and The Sopranos and Breaking Bad. Superfly knows its audience is long past being titillated simply by being asked to empathize with the fear and stress of living outside the law. So it takes a more conventional approach to its leading man, turning its antihero into something almost like a hero. It really, really wants us to like the guy.

The most interesting thing about the remake is the lengths to which screenwriter Alex Tse (whose biggest credit is the 2009 adaptation of the landmark 1986 graphic novel Watchmen) and director Julien Christian "Director X" Lutz (a feature first-timer who's made videos for Drake, Rhianna, and Kendrick Lamar, among many others) go to soften the character — a hustler who has tired of looking over his shoulder and wants to make a score big enough to fund his retirement from The Game.

They've added a judicious yet still unhelpful voiceover. ("All the power in the world never stopped a bullet," ruminates Priest. "And no car can outrun fate." Not with that attitude, guy.) And they've cast Trevor Jackson, a gifted actor who's too pretty for the part — his big break was being cast as Young Simba in a touring production of The Lion King, and certainly no animator could give him eyes any dewier than the ones he's got — and at 21, he's at least a decade too young for it. Ron O'Neal was a hard-living 35 years old when he played the O.G. Priest, which matters less than the fact that Allen Maldonado, who plays the young turk gunning for Priest's crown in the remake, is also thirty-five. So Superfly '18 features not one scene but several wherein a 35-year-old taunts a 21-year-old for being over the hill.

The Jackson-model Priest does not, so far as we see, get high on his own supply, nor does he threaten to force the wives of subordinates who have displeased him into prostitution. That sort of behavior is simply no longer tolerated among purveyors of illicit narcotics. He does not mislead his own romantic partners: Priest and his two girlfriends (Lex Scott Davis and Andrea Londo) are openly a throuple, a development that's revealed in a shower three-way that, in a nod to the original, goes on longer than any other scene in the film.

Tse and Lutz have dialed up the violence even more than the sex; this Superfly has more bloody slo-mo shootouts than any film needs. It also has a lot of janky-looking slow-mo fisticuffs, because Priest is a jiu-jitsu master now. (Work hard, play hard, I guess.)

The Wire's Michael Kenneth Williams was replaced by Paul Bettany in Solo when he could not return for the extensive reshoots that film required, so it's good to see him here as Scatter, Priest's mentor and drug connect who is also his sensei. Williams is the rare actor who can chew his way through paragraphs of exposition without any of it sticking to him. Sample line: "You're rubbing elbows with Atlanta's upper echelons!"

Dialogue is not Tse's gift, but many of his ideas really are upgrades. The A-to-B-causes-C thriller plotting is more urgent and satisfying in this version, and Priest's various enemies are more varied and amusing. There's the Mexican cartel represented by Esai Morales, whom we meet when Priest and his partner Eddie (Jason Mitchell) make a fateful decision to cut Scatter out of the supply chain. There's the drug crew led by real ATL rapper Big Bank Black, who call themselves Snow Patrol. They dress all in white, drive white cars, carry white firearms—custom jobs, presumably—and remind one another of their affiliation ("We Snow Patrol, Baby!") at least once per scene. It's adorable. We meet them in a strip club where there are making it rain with what we the viewers are meant to believe is genuine U.S. legal tender, but very clearly, visibly is not.

More menacing are the bent cops Tse has placed in Priest's path: Jennifer Morrison sheds her TV-princess pedigree to play a narcotics detective who looks like she hasn't slept or showered in days. A scene in which Brian Durkin's redneck patrolman sings "Ridin'" by Chamillionaire while searching a black motorist's car for contraband is at once funny and frightening as hell. And Lutz is smart enough to play a traffic stop by a white officer like it's a set piece from a horror movie.

A more seasoned director of narrative features might've figured of how to sustain these high points. But Lutz careens among tones like a chromed-out Cadillac Fleetwood Eldorado that's had its brake lines cut. (Priest's ride is a sensible Lexus now, but you get my point.) Before the movie goes full, politically charged camp — which it eventually does — some of its most risible moments are unintended. For one thing, Priest is forever lecturing Eddie about the importance of keeping a low profile. He chews the guy out for buying an expensive wristwatch while he spends the movie strutting around around the ATL in an full-length fur coat. And if Jackson were any more elaborately manscaped, his face would be chiseled into Mount Rushmore.

He is dreamy, though. Young Simba's all grown up.