Accessibility links
Why Lawmakers Are Trying To Block Delivery Of Fighter Jets To Turkey Turkey is scheduled to get its first F-35 jet fighters next week, but it is also considering buying Russia's most advanced anti-aircraft system. Congress is moving to block delivery of the warplane. 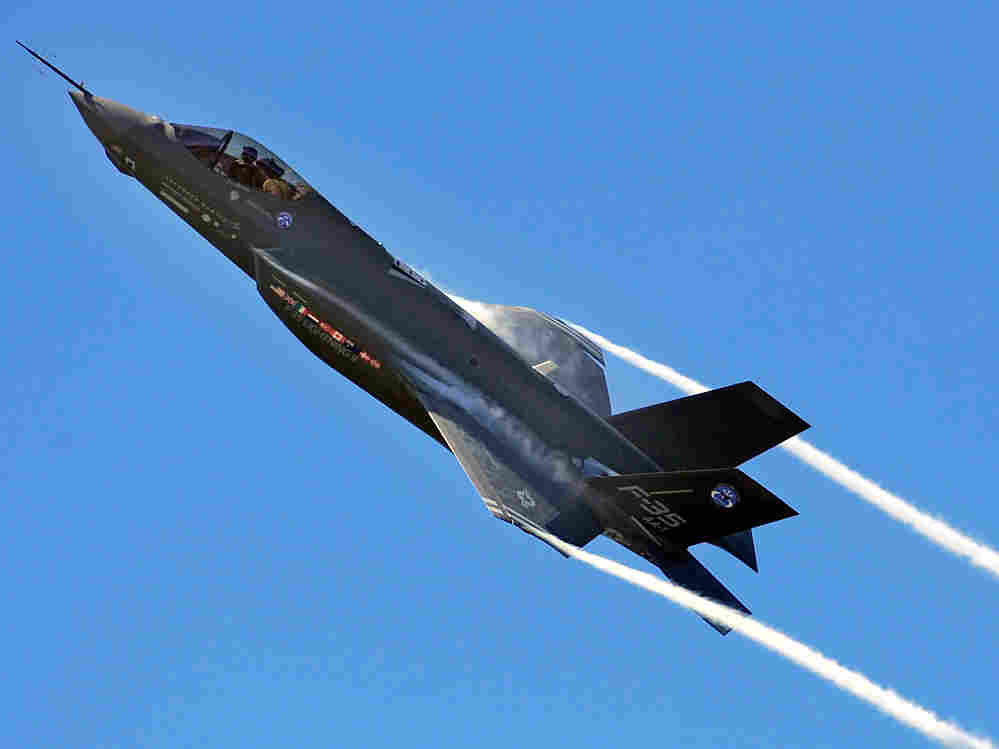 An F-35 Lightning II in flight. Congress is moving to block delivery of the warplane to Turkey, a NATO ally and member of the nine-nation consortium manufacturing the warplane. U.S. Air Force photo/Senior Airman Julianne Showalter hide caption 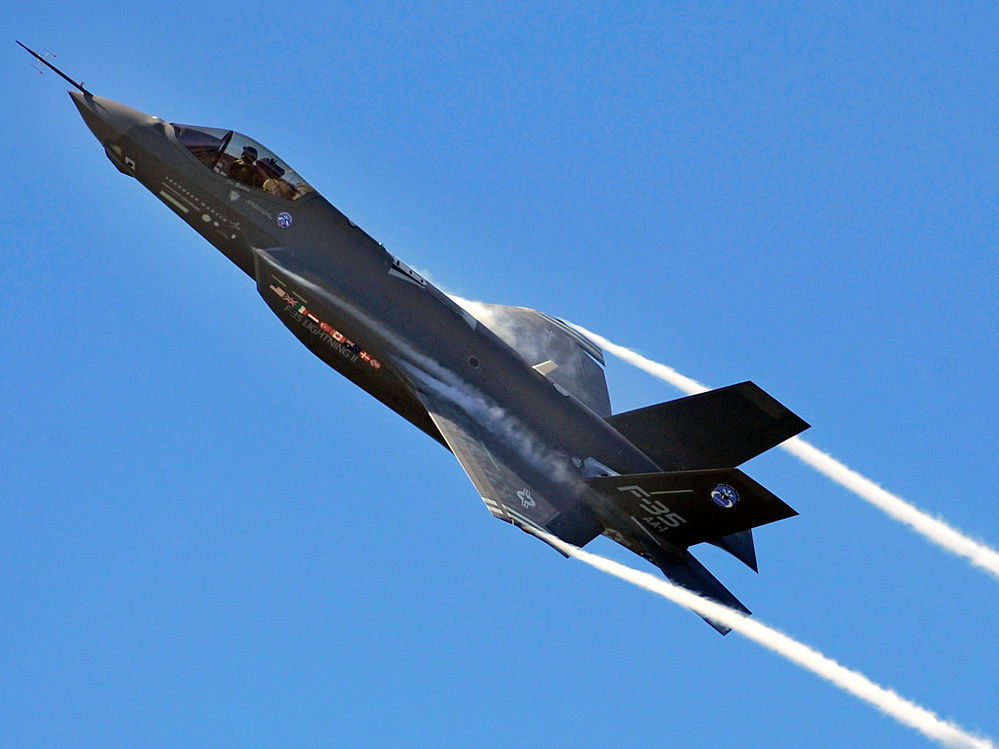 An F-35 Lightning II in flight. Congress is moving to block delivery of the warplane to Turkey, a NATO ally and member of the nine-nation consortium manufacturing the warplane.

If all goes as planned, a long-anticipated ceremony will be held in Fort Worth, Texas on the first official day of summer. It's to mark the nation of Turkey taking possession of its first F-35 jet fighter.

The F-35 is widely considered the world's most advanced and versatile warplane. Not only has Turkey ordered more than 100 of them - it's also part of a nine-nation consortium manufacturing the 300,000 parts that make up Lockheed Martin's 5th-generation stealth fighter.

But there may be a problem. Congress is moving to block delivery of the F-35 to this nation that's been part of the NATO alliance since 1952. And it could be many months before Turkey's first F-35A would be ready to cross the Atlantic, because Turkish pilots have yet to begin their training at Luke Air Force Base in Arizona to fly it.

The Senate has led opposition to the deal.

"On its surface, because they're a NATO ally, I don't object to it," North Carolina Republican Thom Tillis declared this week on the Senate floor. "But today, I strongly object to it."

Tillis accuses Turkey of holding a Presbyterian minister from North Carolina hostage for the past year and a half. He says Pastor Andrew Brunson, whom he visited in jail two months ago, is being held on "bogus" charges to pressure the U.S. to extradite Fetullah Gulen.

There are national security concerns as well about turning over F-35s to Turkey.

"The Turkish government claims to have purchased a Russian air defense system designed to shoot these very planes down," New Hampshire Democrat Jeanne Shaheen declared as she joined Tillis in the Senate chamber. "NATO partners need these F-35s to counter Russian activity. We would be handing this technology over to the Kremlin if we granted Turkey these planes, and Congress will not stand for it."

NATO ally looks to Russia for an anti-aircraft system

Late last year, Turkish Defense Minister Nurettin Canikli announced that Turkey had ordered the Russian-made Triumf S-400 air defense system, whose eight launchers and 32 missiles can target both stealth warplanes and missiles within a radius of 372 miles. The missile system is not inter-operable with NATO's air defenses.

More worrisome, Russia and Turkey could together use it to run tests to reveal vulnerabilities in the F-35.

"If the Russians want by electronic means or even through their technicians to get access to all this F-35 stuff that's highly classified, that's a problem," says James Jeffrey, a former U.S. ambassador to Turkey.

Senators Shaheen and Tillis have co-authored, along with Oklahoma Republican James Lankford, legislation that orders the Pentagon to come up with a plan that would keep the F-35 out of Turkey's hands. It's part of the much larger National Defense Authorization Act that the Senate is set to vote on just days before the Fort Worth handover ceremony.

The Trump administration has also signaled its concern.

"It is still very much a live issue, the Turks' capacity to have access to the F-35," Secretary of State Mike Pompeo told Congress late last month.

That was followed by a more specific warning last week from Wess Mitchell, who's the State Department's assistant secretary for European and Eurasian affairs and its point man on Turkey.

"They should expect that if they move forward with a sophisticated Russian weapons platform, they can expect to see it have a ripple effect for their participation in U.S. military industrial projects," Mitchell said at the Heritage Foundation, "and I think that includes the F-35."

The same day that the senators spoke out against the Turkish warplane deal, which includes that nation hosting a maintenance center for F-35s worldwide, a senior Pentagon official struck a more conciliatory tone in an appearance at the Atlantic Council, a NATO-focused Washington think tank.

"Our preference is that they do not acquire the S-400," said Assistant Secretary of Defense for Europe and NATO Thomas Goffus. "Given that, they are a sovereign nation and they are trying to take care of their defense needs."

According to Washington-based Nilsu Goren, who studies Turkey's military, Turkey turned to Russia after concluding that the U.S., and the U.S. Congress in particular, would not provide the Patriot air defense system made by Raytheon that Ankara wants to defend its southern border.

"From their perspective, the U.S. has denied them the technology and access to its security assets at the times that Turkey needed them the most," Goren tells NPR. "Turkey sees no contradiction in purchasing a Russian air and missile defense system while continuing to work with its NATO partners."

Oklahoma's Lankford disagrees. "If Turkey is not going to end up cooperating with NATO," he tells NPR, "there's no reason to have a NATO base there."

But former U.S. ambassador Jeffrey says losing Turkey as part of NATO would be a huge blow to the alliance.

"You can do nothing in the Levant, nothing against Iran or very little, nothing in the Caucuses, nothing in the Black Sea without Turkey's geographic space, its bases and its military force, which is the second largest in NATO," says Jeffrey, who's now at the Washington Institute for Near East Policy. "I mean, it's extremely important."

Jeffrey says it is unlikely Erdogan will make any concessions to the U.S. until after Turkey's June 24 national elections, given what he says is the longstanding unpopularity of the U.S. among Turks. "It's a little bit tricky for the Turks to respond to this," he adds.

It's bound to be a conundrum for the U.S. as well.