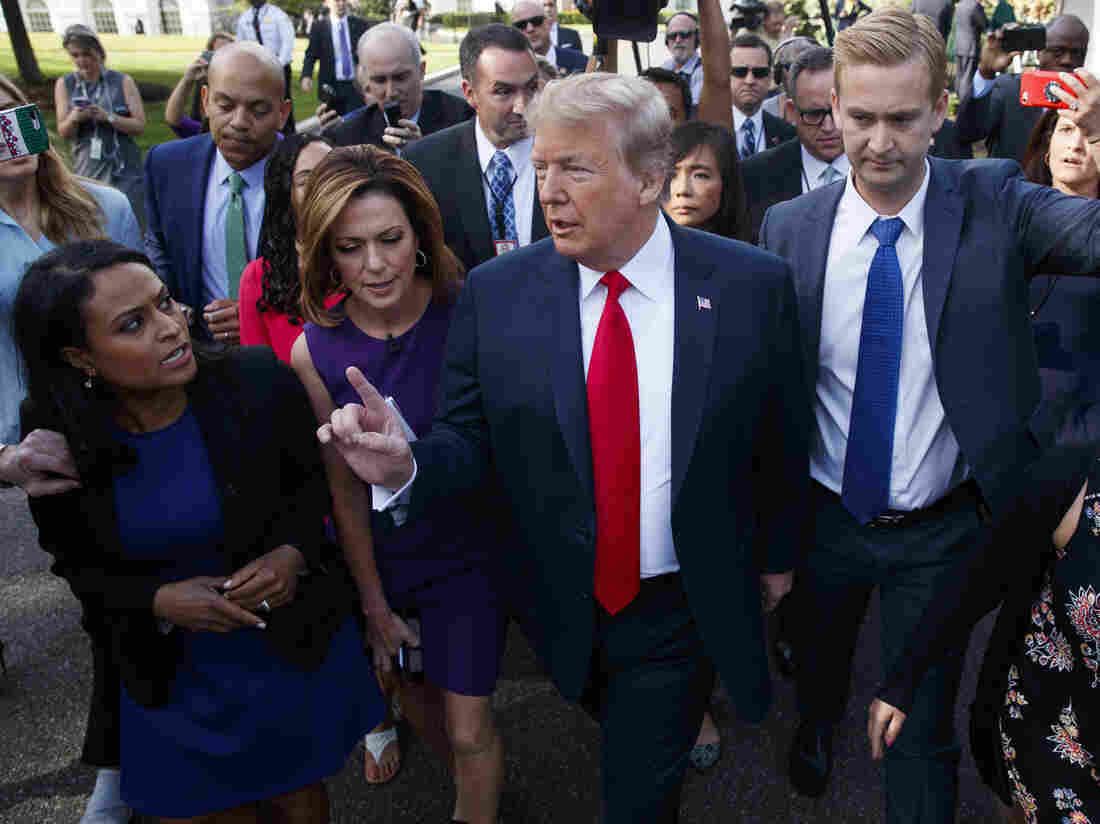 In separate remarks to reporters at the White House on Friday, President Trump insisted he wanted to see Congress pass legislation that would end his administration's policy of separating migrant families at the border. Evan Vucci/AP hide caption 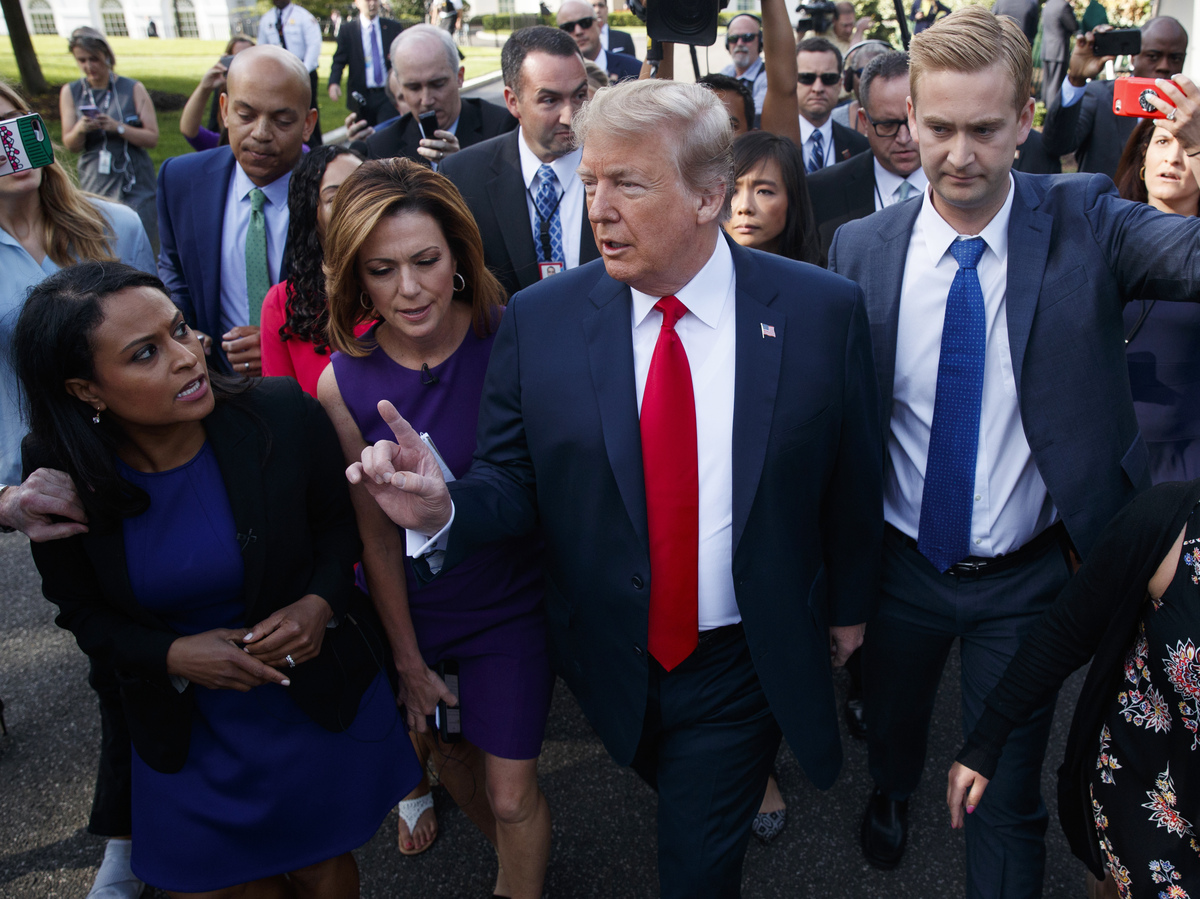 In separate remarks to reporters at the White House on Friday, President Trump insisted he wanted to see Congress pass legislation that would end his administration's policy of separating migrant families at the border.

President Trump took Capitol Hill by surprise on Friday morning when he said that he would not sign a House GOP immigration bill — only to reverse course later in the day.

"I'm looking at both of them. I certainly wouldn't sign the more moderate one," Trump told Fox News in a previously unannounced interview on the White House lawn.

The comment created a frenzy on Capitol Hill, where House GOP leaders have been working for weeks on legislation aimed at meeting the so-called four pillars of Trump's policy demands on any bill to provide a path to legal status to people brought to the U.S. as children. House Republicans had been working with top White House aides including Marc Short and Stephen Miller to ensure the president's support in the event it reached his desk.

By late afternoon, the White House indicated to House Republicans that the president "just misunderstood" the question and supports the compromise, according to a House GOP source.

Leaders were negotiating two versions: a conservative proposal crafted by House Judiciary Committee Chairman Bob Goodlatte, R-Va., and backed by members on the right of the GOP conference, and a bill negotiated by top House Republicans that attempts to bridge the divide between conservatives and centrists.

Several members involved in those talks say they plan to continue negotiations with a goal of voting on both legislative proposals next week.

House Freedom Caucus Chairman Mark Meadows, R-N.C., told reporters Friday that he believes Trump has an accurate understanding of what is in the draft compromise and is simply pushing for the most conservative bill and not for ending the talks.

"I know there's been ongoing conversations with the administration as early as this morning on the bill," Meadows said. "Listen, you're taking one comment that the president said that he preferred a more conservative bill. That's a consistent theme. At the same time, if a conservative bill can't pass, then everything gets renegotiated."

Members are particularly confused by Trump's statement because Miller had offered conservatives private assurances of Trump's support during a closed-door meeting on Wednesday.

Afterward, he told reporters: "The president has been extremely supportive of what [GOP Reps.] Raul Labrador and Bob Goodlatte and Steve Scalise are doing to unify the Republican Conference. I think both the bills are being finalized right now, but we strongly support what they're doing."

Moderates, in particular, were frustrated by the seeming change of heart. Florida Republican Rep. Mario Diaz-Balart told reporters that they would have "serious problems" if Trump's statement stands. He said the legislation is likely the only chance Republicans will have to pass a bill to fund the border wall and protect immigrants who are in the country illegally after being brought here as children, known as DREAMers.

Adding to the chaos was Trump's insistence on Fox News that any bill would need to include provisions like money for a border wall and tougher border enforcement. The legislation includes both.

In separate remarks to reporters at the White House, Trump also insisted he wanted to see Congress pass legislation that would end his administration's policy of separating migrant families at the border.

"I hate the children being taken away," he said. "The Democrats have to change their law. That's their law."

The president once again put the blame on the Democrats in a tweet on Friday afternoon, which listed the items he wants included in an immigration bill.

The Democrats are forcing the breakup of families at the Border with their horrible and cruel legislative agenda. Any Immigration Bill MUST HAVE full funding for the Wall, end Catch & Release, Visa Lottery and Chain, and go to Merit Based Immigration. Go for it! WIN!

There is no federal law that requires family separation. As part of a Justice Department crackdown on immigration, the Trump administration has imposed tougher border enforcement that now includes separating parents and their children into different detention facilities.

The president reiterated his election-year message that more Republicans will be needed in Congress to enact his immigration policies, which he believes most Americans support.

"We need more Republicans, frankly, and that's why I think we're going to do so well in the midterms," he said.