Accessibility links
Struggling For Words, A Boy And His Grandfather Are 'Drawn Together' At Last Author Minh Lê had a loving relationship with his grandparents, but he also remembers a lot of "awkward silence." His new book explores barriers of language and culture between generations. 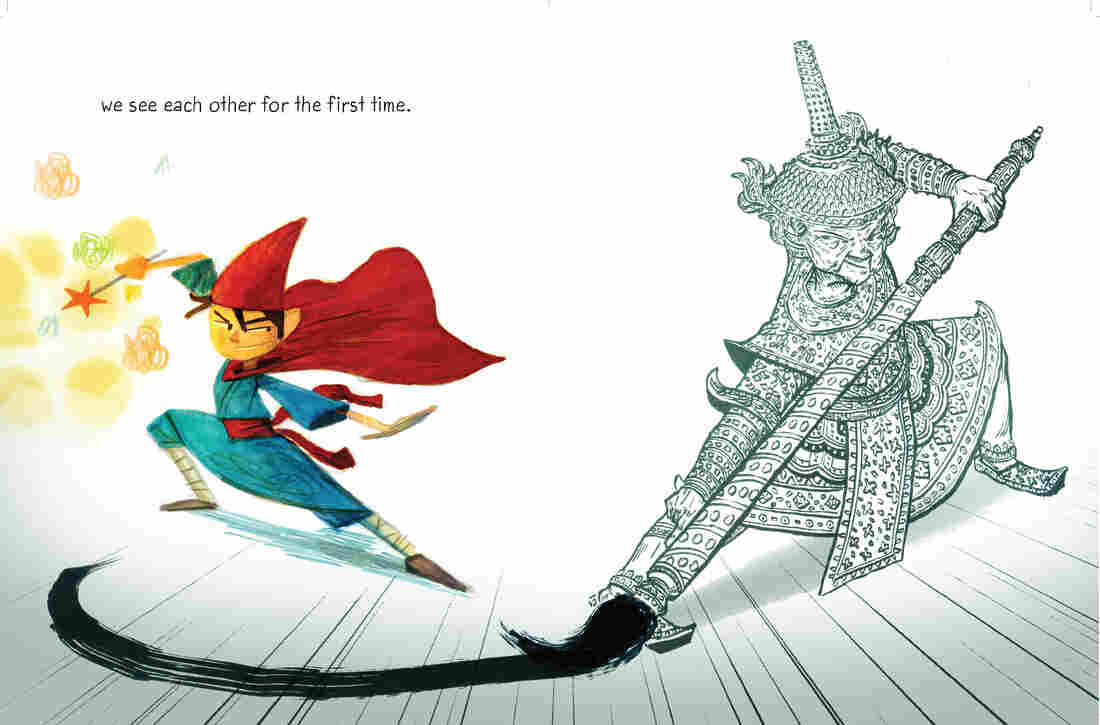 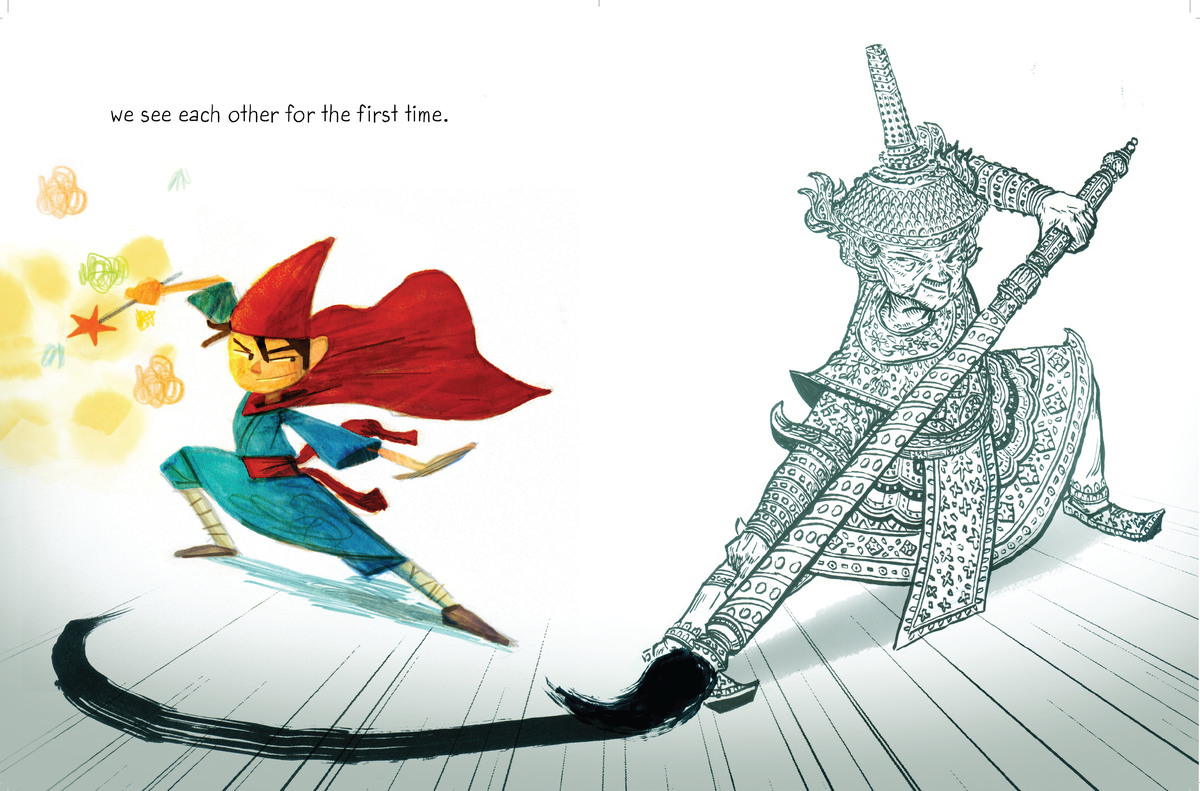 In Drawn Together a boy and his grandfather paint themselves as heroes. "I wanted to have a book that was both emotionally resonant but also exciting for kids," says author Minh LÃª. (A "very ferocious" dragon appears a few pages later.)

As a child, author Minh Lê had a deep and loving relationship with his grandparents, but he also remembers a lot of "awkward silence."

"There were those moments where we just didn't know what to say to each other," he says.

Lê was born in the U.S. and grew up in Connecticut. His grandparents were from Vietnam. His new picture book — a collaboration with Caldecott Medalist Dan Santat — explores how a young boy and his Thai grandfather learn to bridge barriers of language, culture and age.

"I wrote it based on my relationship with my grandfather," Lê explains. Santat, whose family came from Thailand, "had a personal connection with his grandmother that was a very similar."

Drawn Together uses relatively few words to tell a story about struggling to find them. After an evening of uncomfortable silence, the boy and his grandfather finally figure out how to communicate: "It's only when they discover a mutual love of art that they're able to connect ..." Lê says. "And then their relationship kind of takes off from there."

On his relationship with his own grandparents

My parents came over right before the war got really bad in Vietnam and my grandparents came shortly thereafter. ... My grandfather is also naturally a man of few words. I keep telling people — there's no question in my mind that he and I knew how much we meant to each other, but we weren't quite able — I wasn't quite able — to convey that to him through words. ... Our relationship was defined by what we couldn't say. 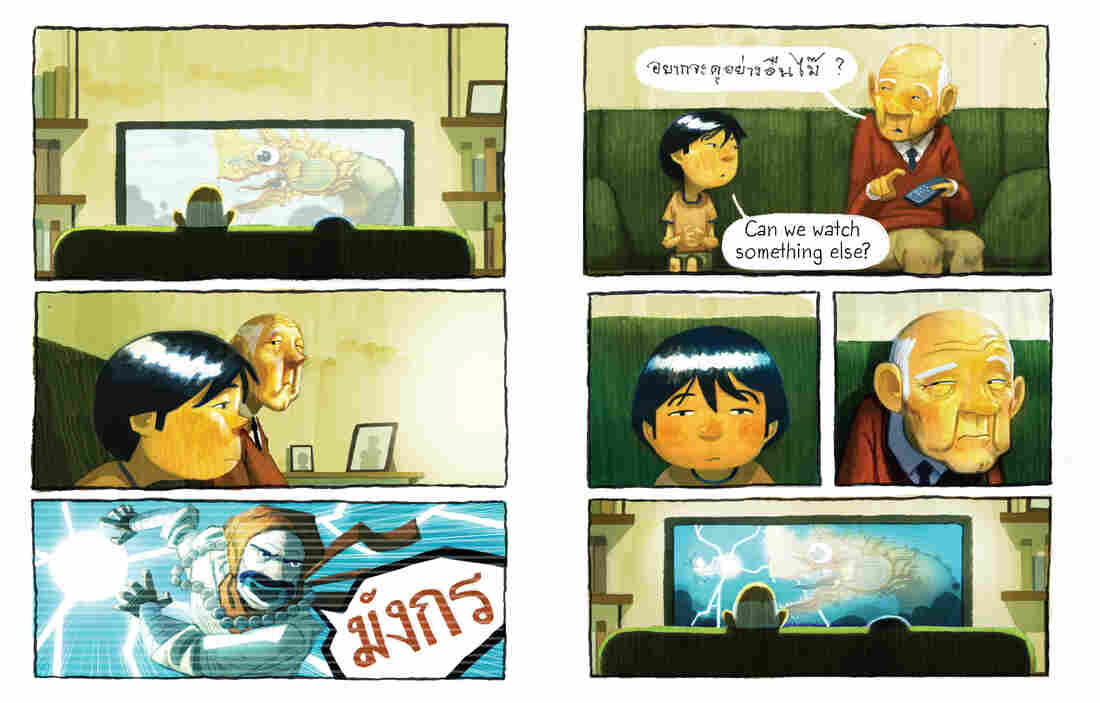 In this page from Drawn Together, the boy and his grandfather are actually asking each other the same question in English and Thai — Do you want to watch something else? — but they cannot understand one another. Dan Santat/Disney-Hyperion hide caption

The boy draws a picture of himself as a wizard — like one of the heroes of his imagination — and the grandfather sees that and has this epiphany and runs to his room and grabs his own art supplies and draws a picture of himself as one of the heroes from his childhood. ... It's almost like peeling back the layers of their identities and they see each other for the first time.

You start to question the depth of your relationship if you can't speak in the most basic ways.

On a moment that helped him feel connected to his grandfather

While we didn't have that kind of like epiphany moment that comes in the book, I remember going to my grandfather's house for a New Year's celebration and seeing these beautiful signs on the wall in calligraphy. And I asked my parents, "So who made them? Where did they get those?" And they said, "Oh your grandfather painted those." And from there [I] discovered that he, as a young man, wanted to be an artist.

On different kinds of distance between generations

I have grandparents in Vietnam as well. Sometimes it's a literal, physical distance — like you are halfway across the globe. Sometimes it's a more metaphorical distance — just not being able to connect. You start to question the depth of your relationship if you can't speak in the most basic ways. ... Especially as a kid, it's tricky to deal with or to wrap your mind around. 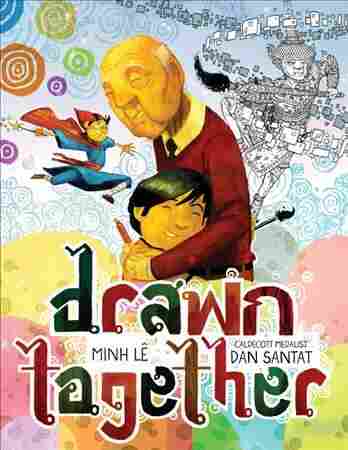 by Minh Lê and Dan Santat

On whether he shared the book with his grandfather

I actually didn't talk to him about the book ... it was so personal, I didn't know how to talk to him about this. So the hope was to be able to hand this book to him and kind of share that moment. ... Unfortunately he passed away this past year before the book came out. ... When he was admitted to hospital, I had just gotten sketches of the book for the first time and so ... I made this dummy copy of the book. I rushed it up to him, but unfortunately he never recovered in time for me to be able to truly share the experience of the book with him. But at the same time, it's been really gratifying, because for this past year, even though he's no longer here, working on this book has made him feel very much present in our daily lives.

On how the book is resonating with people of all backgrounds

People have been coming up, telling me about [how] they've had very similar upbringings, they also come from immigrant families, and it resonates with them. But then other people say, "I spoke English with my grandparents but we just couldn't connect for the longest time until we figured out some other way to bridge that gap." So I feel like it's been very gratifying to have a story that's very personal and very specific resonate ... across cultural experience.

On his takeaway from the book

It's not always easy to connect with people — even the people that are most important in your lives. So if there's any takeaway for me from making this book, and from sharing this book, it's that — while it takes effort, that effort is hopefully worth it — and you better get on it before it's too late.

Justine Kenin and Melissa Gray produced and edited this interview for broadcast. Beth Novey adapted it for the Web.