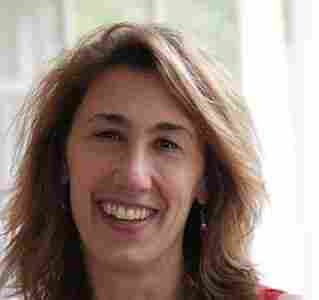 Deborah Epstein resigned from a NFLPA-funded commission created to tackle domestic violence in the NFL, after a "pattern emerged" in her conversations with the association. Courtesy of Deborah Epstein hide caption

Deborah Epstein has spent her professional life fighting for victims of domestic violence. But protecting such victims is also what Epstein says led her to step down from a commission meant to tackle the issue of domestic violence in the National Football League.

The NFL's Players Association Commission on Violence Prevention was formed after several NFL players were accused of violence against their domestic partners, including Ray Rice of the Baltimore Ravens, who knocked his fiancée unconscious in an elevator.

In 2014, Epstein, director of the Georgetown University Law Center's Domestic Violence Clinic, was asked to serve on the commission. She and research psychologist Lisa Goodman were authorized to conduct a national study of players' wives, collecting the women's suggestions for handling domestic violence and supporting its victims.

As she tells NPR, her decision to resign came after troubling "pattern emerged" in her communications with the NFLPA.

"I brought a number of ideas to the commission about ways in which they could deal with the domestic violence problem in the NFL," she says. The report compiled short-term and long-term recommendations.

The NFLPA heard her out, she says, but since filing the report in June 2016, "it has sat on the shelf."

"The Player's Association contacts that I have would welcome those ideas, tell me they were eminently doable, but that they had to get kicked down the road because 'It was the Super Bowl, it was the draft, it was the season,' " she says. "And I would come back and reiterate my suggestions, and eventually I found that communication would just die on the vine."

"I realized very little, if anything, was going to happen."

NFLPA said it respects Epstein's decision to resign, but has disagreed with her reasoning. NFLPA Deputy Managing Director Teri Smith says the association never had plans to publicly release the study. "We did circulate that report to our player leadership, and we have implemented a number of recommendations made by [Epstein], both in that report and over the life of the commission being in existence," Smith says.

Citing an NFLPA spokesperson, ABC News says, "Those recommendations include the hiring of a director of wellness who is a trained clinician, in depth crisis training for staff who work with players, greater emphasis on marriage counseling and enrichment events focused on couples."

Esptein, who signed a confidentiality agreement with the NFLPA, says she can't divulge what recommendations she provided in the report. Ostensibly, the confidentiality protects the anonymity of spouses and partners of NFL players from retribution, allowing them to speak freely.

But she will say why she thinks the actions the NFLPA says it's taken do not align with the commission's recommendations — and beyond that, she says, are "woefully inadequate."

First, she says, the hire of a director of wellness "is responsible for all wellness-related issues for more than 1,500 NFL players scattered across the country, and she has no particular training or experience in the field of domestic violence."

While Epstein says the crisis management training the NFLPA has introduced for player-interfacing staff is "terrific," crisis management as it relates to alcohol, drugs or mental health is "very different than managing a crisis of domestic violence for someone who's actually at risk of physical harm."

The NFLPA's third action, a focus on marriage counseling and couples enrichment, concerns Epstein the most.

"If you speak to anyone who works in the domestic violence field, they will tell you we have known for more than a quarter-century: that marriage-based/couples-based counseling is absolutely not the way to deal with domestic violence," she says.

"When a power dynamic in a relationship is so deeply unequal, it's not the way to go. So they are not only taking inadequate actions, they are taking actions that are not recommended by the advocacy community."

In a Washington Post op-ed earlier this month, Epstein says, "I simply cannot continue to be part of a body that exists in name only," and what, she believes is "a fig leaf."

NFLPA's Teri Smith says she's "disappointed" in Epstein's response. "It's certainly not in name only. And we've had a number of substantial changes on that landscape since the commission's inception. And we've also had fewer incidents of domestic violence reported since then as well within the NFL."

NFLPA union members (the NFL players) approved the national study. Epstein says she doesn't see "any reason why the players would object to hearing about and vetting the suggestions that the women of the NFL have said would make NFL families safer from violence. I would think they would embrace that."

But Epstein does have one recommendation she can vocalize.

"The NFL Players Association, which is not under any confidentiality agreement, take out its study, make its findings public, and go to the players and start implementing them."

NPR's Sarah Handel and Viet Le produced and edited this story for broadcast.