Accessibility links
Faith Leaders Oppose Trump's Immigration Policy Of Separating Children From Parents They condemn a border practice of tearing children away from their parents. It is an attempt to "weaponize children," Archbishop of Miami Thomas Wenski tells NPR's Weekend Edition. 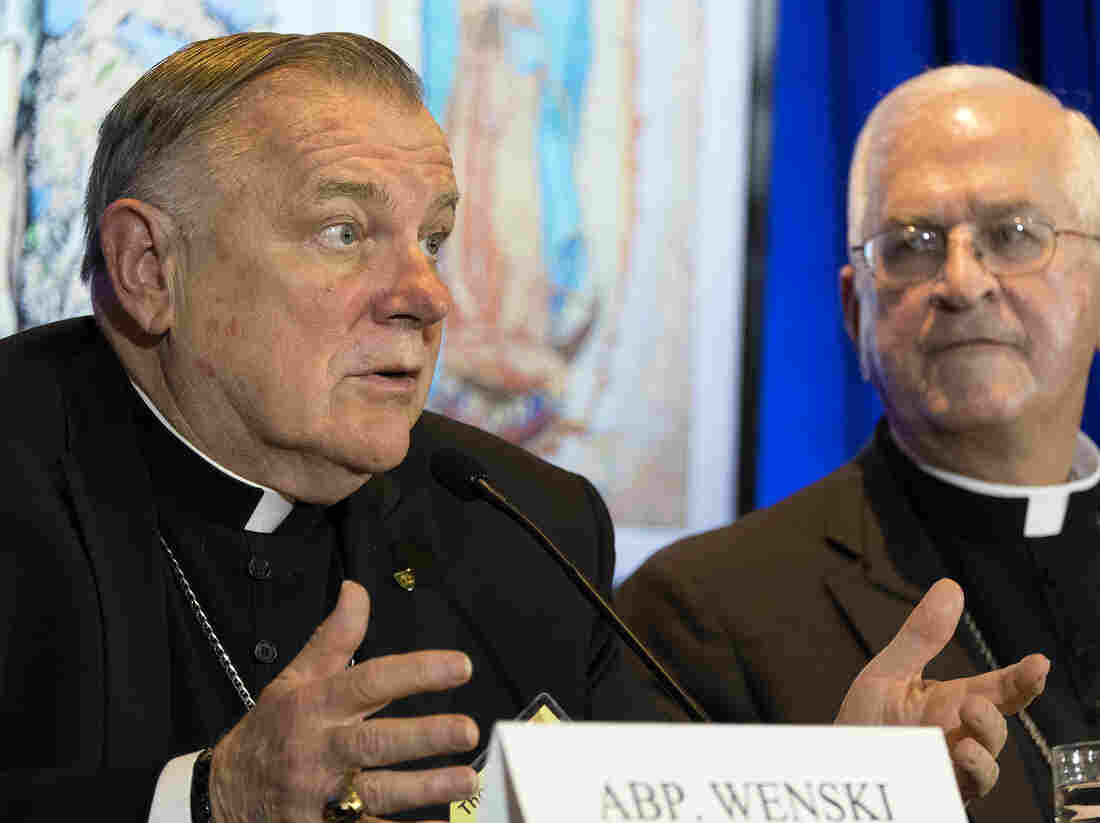 Archbishop Thomas Wenski of Miami, photographed at a news conference in 2015, said the Trump administration's policy of separating immigrant children from their families "goes against the values of our nation." Sid Hastings/AP hide caption 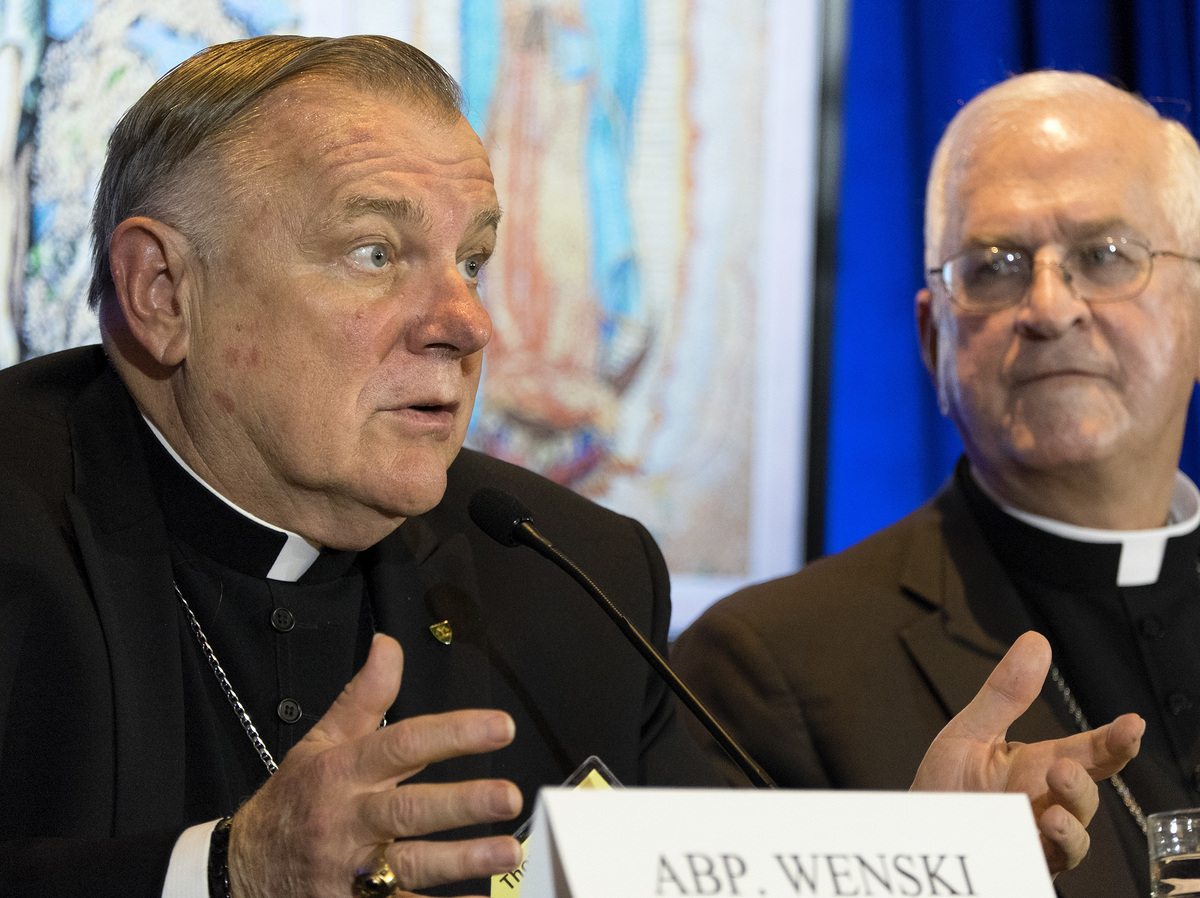 Archbishop Thomas Wenski of Miami, photographed at a news conference in 2015, said the Trump administration's policy of separating immigrant children from their families "goes against the values of our nation."

A Trump administration policy of separating children from their parents on the U.S. border has prompted a crescendo of criticism among religious leaders.

They span different faiths, denominations and ages. Some of them have also helped the president gain support for his base.

About 11,000 children are in shelters, according to the Office of Refugee Resettlement. Nearly 2,000 children were removed from the care of their parents and taken into federal custody between April 19 and May 31, an immigration official said Friday.

That practice effectively "weaponizes" children, Archbishop of Miami Thomas Wenski told NPR's Weekend Edition on Saturday. "Basically the administration has, in deciding to separate children from their parents, [tried] to weaponize children, using them as a leverage against the parents applying for their asylum applications."

He said that border agents and administration should "use their conscience," while policymakers should do some "soul searching."

Evangelical leader Franklin Graham, son of "America's pastor" Billy Graham and a prominent Trump supporter, told the Christian Broadcasting Network on Tuesday, "It's disgraceful, and it's terrible to see families ripped apart and I don't support that one bit."

His words follow an April survey by the Public Religion Research Institute, which found that 75 percent of white evangelicals held favorable views of Trump.

Tony Suarez, a Latino pastor who has informally advised Trump, tweeted, "God have mercy on those who seem so nonchalant to the plight of children being separated from their parents."

Cardinal Daniel DiNardo, president of the U.S. Conference of Catholic Bishops and archbishop of Galveston-Houston in Texas, said in a statement, "Separating babies from their mothers is not the answer and is immoral."

Rabbi Jonah Dov Pesner, director of the Religious Action Center of Reform Judaism, called it "unconscionable," saying, "Those at the highest levels of the Trump administration are responsible and must provide the public a clear explanation of how this happened and how these families will be reunited."

Embers of disapproval were stoked when Attorney General Jeff Sessions cited scripture on Thursday in defense of the administration's tough immigration policies.

"I would cite you to the apostle Paul and his clear and wise command in Romans 13 to obey the laws of the government because God has ordained the government for his purposes," he said.

Historians and faith leaders were quick to point out that such passages were also used to justify slavery. "The founders of this nation used the same tactics to enslave our African forebears by lifting from the writings of the Apostle Paul passages to condone slavery and to break their spirit," the African Methodist Episcopal Church stated. It called Sessions'remarks "sad and sinful."

Jentezen Franklin, a member of Trump's evangelical council, told CNN, "It's a very dangerous route to go when you begin to take selections of scriptures and say, 'The Bible was written to justify political standings. The Bible was never written as a political road map.' "

Cardinal Timothy Dolan, who in March said that the "big tent of the Democratic Party now seems a pup tent," called the breaking up of families "un-American and unbiblical."

In an interview on Friday with CNN, he said, "If they want to take a baby from the arms of his mother and separate the two, that's wrong. I don't care where you're at, what time and what condition ... That goes against human decency."

Earlier in the week, the Southern Baptist Convention passed a resolution affirming that immigrants be treated "with the same respect and dignity as those native born." It emphasized border security but also "a pathway to legal status with appropriate restitutionary measures, maintaining the priority of family unity."

Beyond politicians, pediatricians have also denounced the practice of tearing children away from their parents, saying it can disrupt brain development and harm long-term health.

The president attempted to cast the blame away from his administration Friday morning, tweeting, "The Democrats are forcing the breakup of families at the Border with their horrible and cruel legislative agenda."

No federal law requires family separation. The policy is part of the Justice Department's clampdown on immigration.

House Republicans plan to vote next week on a pair of immigration bills, including one that would end the controversial practice of separating children from their mothers and fathers.