Accessibility links
'Where The Nightmares Go' Maps The Territory Of Fear C. Robert Cargill's new story collection covers the globe and genres of horror from classic to modern, with ghost stories, thrillers, gore and puzzles that would be right at home on premium cable. 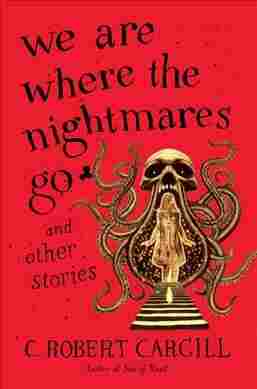 We Are Where the Nightmares Go and Other Stories

Title
We Are Where the Nightmares Go and Other Stories
Author
C. Robert Cargill

A radio spitting on an open channel. Phones that ring with no one on the other end. Doors that open onto plain white rooms and worlds made of nightmares. The chance meeting at the bar that's too good to be true — right up until it isn't.

These are the props of C. Robert Cargill's world. The hooks (sharpened, mean and gleaming) that move his plots forward across gravel, broken glass and blood-slick floors. In We Are Where The Nightmares Go, he has assembled 10 short horror stories that cover the territory of fear from Virginia to Iraq to Australia, that whipsaw back and forth between the classic and the very modern. He has ghost stories and supernatural thrillers, a gore-porn short-short with a surprising, gentle twist, lots of "trapped-in-a-BLANK" chase-y puzzlers, and one (the headliner, though not the title story) that really belongs on TV, on one of those high-number cable channels that allows fantastic violence and bad language.

"The Town That Wasn't Anymore" is what Cargill calls it. Not the best title, but apt. Kind of. It's modern horror, slow to unfold, absolutely supernatural but anchored enough in the details that it feels ... I don't know. Possible? Like a story you hear from a local when your car breaks down in a small town that doesn't show up on any maps.

It's a quiet story. Soft, at least as it revs up. It's about the unquiet spirits of 200-some miners who died in a mine accident, trapped beneath the town of Pine Hall Bluff, Va. They died, then the mine died, then the town died — an economic chain reaction. But a few dozen people are still living there, and Wilton, the town sheriff, has stayed around to protect them. From each other, a little. But mostly from the ghosts of those who died in the mine – and who, some nights, come howling out of a tear between worlds to possess the living and infect them with all their pain and rage.

'Tender' Stories Are A Feast Of Ideas

We All Live In The Dark, But Some Of Us Live In 'The Dark Dark'

It's got a Stranger Things vibe, albeit one that's stripped down to campfire basics — no government scientists, no conspiracy, no Ghostbusters costumes. Just something out there in the trees and fog that's pissed off and coming for you.

Cargill's other tales orbit around that opener in a constellation of styles. The titular "We Are Where The Nightmares Go" is a dark fairy tale about a very smart, very calculating girl who finds a secret door underneath her bed and a clown of her very own. "Jake And Willy At The End Of The World" is a bloody confection, a short and sweet the-monsters-are-right-outside-the-door kind of thing that deals with heaven, Obama, friendship and Stephen Hawking, all in the space of just a couple pages. "Hell Creek" is the one that'll sell most horror fans on this book because, yes, it really is about a triceratops and an ankylosaur teaming up to fight zombie T-rexes at the end of the world.

"I Am The Night You Never Speak Of" is a cautionary tale about ancient, hungry monsters with the power to be or become anything you want them to be. There's a slick, black leather darkness at the heart of it, a cloying sense of closeness, and Cargill pulls no punches. It's the kind of thing that'll put you off Singles Night at the bar forever. And "Hell They Call Him, The Screamers" is just plain nasty, vicious and gross — but worth it (arguably, I suppose) for the weary sigh of a frame shift that Cargill pulls right at the end. I could make an argument that it is actually the most effective of the stories in this collection, but pretty much everyone would disagree with me. Plus, I really did like "The Town" a lot more.

... really, every ghost story is just a story of regret. And Cargill gets that.

"As They Continue To Fall" is an oddity — something Cargill wrote twenty years ago and includes here for his fans. And there are others that don't quite rise to the level of the first couple tales he has to tell. But even those tend to have in them an idea, an image, even just a feeling that will stick to you after you put the book aside. The angel of death's pinstripe suit and hat in "The Last Job Is Always The Hardest." The sound of trapped souls rattling in their chairs in "A Clean White Room."

And Cargill gets that. He understands that a bad decision is what happens before the story starts and peace is what comes when it's done. In the middle is the change, the comeuppance, the duty, the sacrifice. In between is where the soul comes clean. All the blood and monsters are just window dressing.

Except when you're talking about zombie dinosaurs, of course. Zombie dinosaurs regret nothing. They're just awesome all on their own.