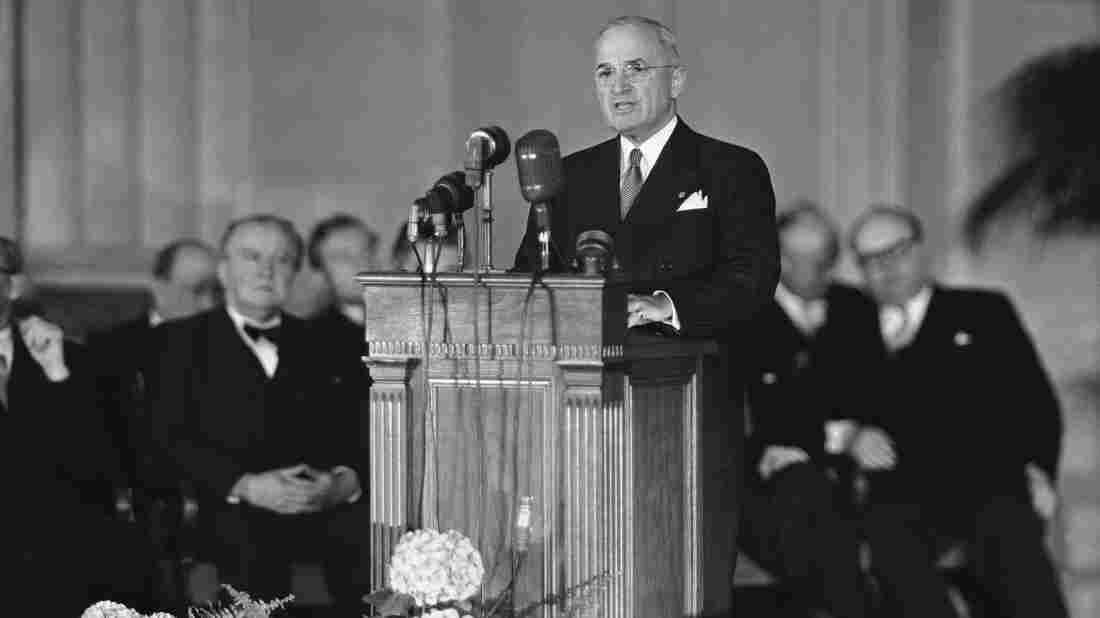 President Harry Truman calls NATO a "shield against aggression" at the ceremony that established the 12-nation alliance in Washington in 1949. Truman played a central role in creating many of the international organizations set up in the wake of World War II. President Trump has often questioned their relevance and cost under his "America First" policy. AP hide caption 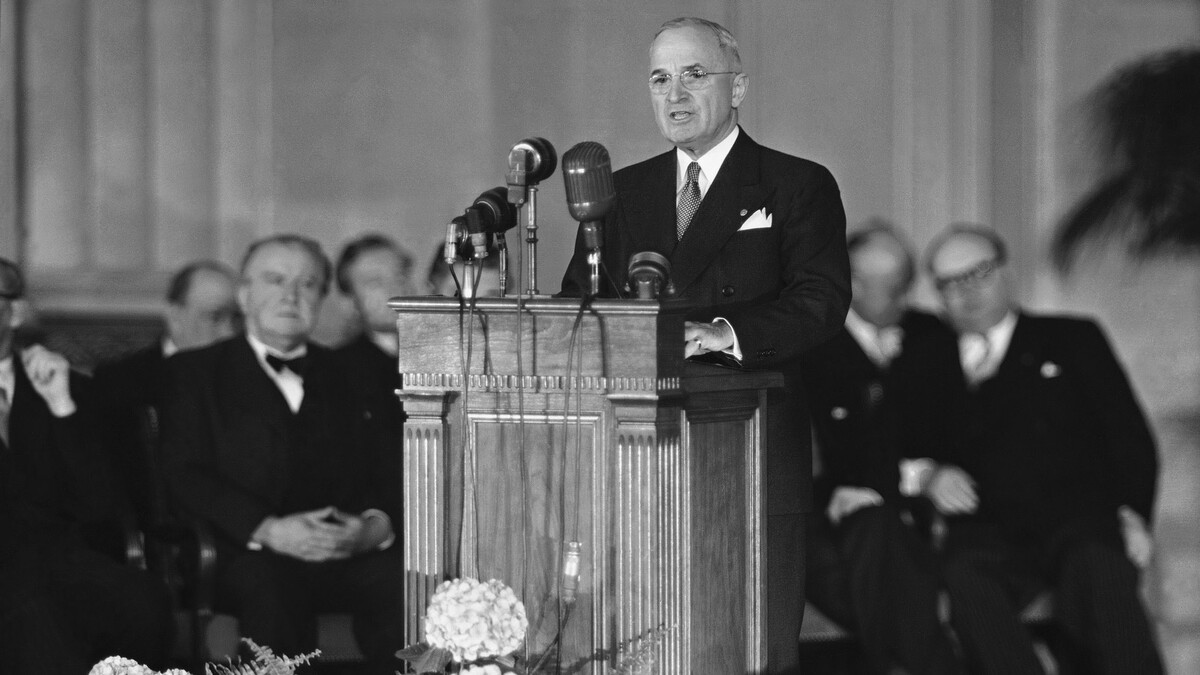 President Harry Truman calls NATO a "shield against aggression" at the ceremony that established the 12-nation alliance in Washington in 1949. Truman played a central role in creating many of the international organizations set up in the wake of World War II. President Trump has often questioned their relevance and cost under his "America First" policy.

When World War II ended in August 1945, President Harry Truman was a man in a hurry.

In the final few months of that year, he pushed hard to help establish the United Nations to handle international political disputes, and the World Bank and the International Monetary Fund to deal with the shattered global economy.

Truman turned to security in a landmark speech to Congress in 1947, which spelled out his Truman Doctrine and warned of the threat of communism:

"It must be the policy of the United States to support free peoples who are resisting attempted subjugation," Truman told Congress at a moment when Greece and Turkey were seen as vulnerable to a communist takeover.

"If we falter in our leadership, we may endanger the peace of the world, and we shall surely endanger the welfare of this nation," he added.

A few months later, his administration launched the Marshall Plan, which provided economic assistance to aid Europe's rise from the ruins. In 1949, NATO was established as a 12-nation military alliance.

All this in less than five years.

"It was a remarkably creative period of American diplomacy. We hadn't done anything quite like that before," said Stephen Walt, a professor of international relations at Harvard. "All of those institutions have remained intact ever since and have been a principal vehicle for American influence around the world." 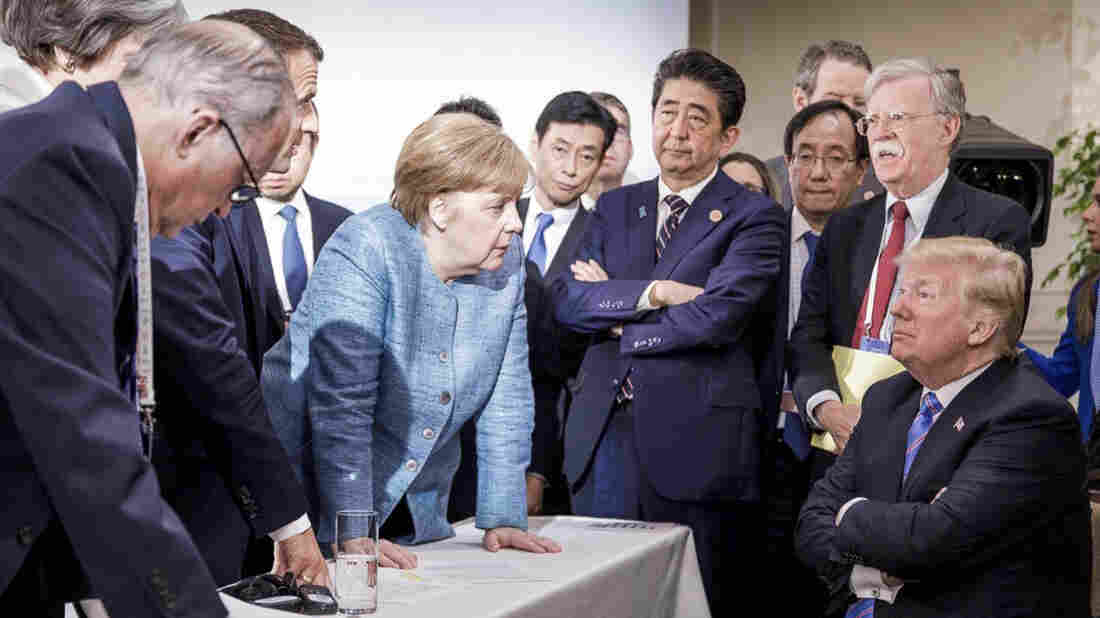 President Trump speaks with other leaders, including German Chancellor Angela Merkel, center, during the G7 Summit in Quebec, Canada on June 9. Trump has frequently criticized some of America's closet allies on matters such as trade tariffs. Jesco Denzel/AP hide caption 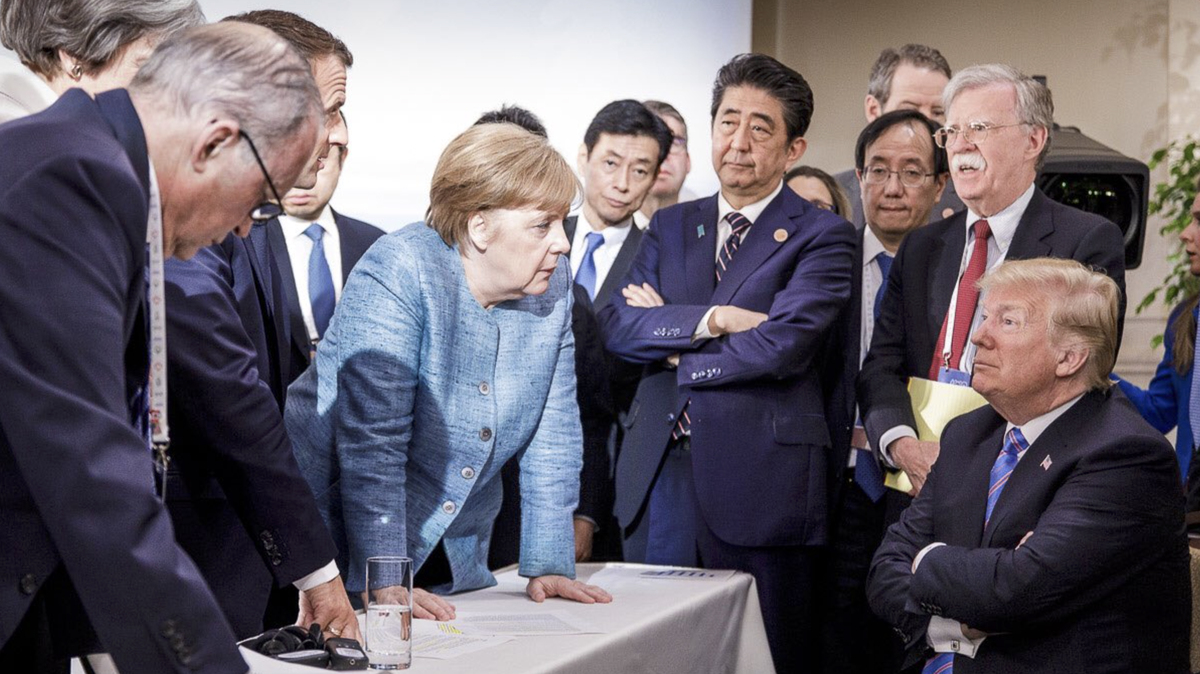 President Trump speaks with other leaders, including German Chancellor Angela Merkel, center, during the G7 Summit in Quebec, Canada on June 9. Trump has frequently criticized some of America's closet allies on matters such as trade tariffs.

With his policy of "America First," President Trump has a very different take on this complex web of treaties and alliances set up and shaped by the U.S. over the past seven decades. Trump's business background guides his world view, and he often sees them as financial burdens rather than assets.

He's battling Canada over tariffs on dairy products. He says NATO members aren't paying their share of defense costs. And he caught South Korea by surprise in announcing a halt to joint military exercises.

"I call them war games and they are tremendously expensive. The amount of money that we spend on that is incredible," Trump said in a press conference after his June 12 summit in Singapore with North Korean leader Kim Jong Un.

The U.S. does shell out billions to keep troops all around the world. But Truman believed that made the U.S. — and the world — more secure and prosperous.

Truman's desire for this network of political, economic and military institutions flowed directly from his World War I experience as a young artillery captain. He survived the Meuse-Argonne Offensive, the deadliest U.S. battle of that war, which claimed more than 26,000 American lives in France in the final weeks of the war in 1918.

"One of his men later described it as fighting for two days in a cemetery of unburied dead," said Mike Breen, president of the Truman Center in Washington.

Truman "was a man who clearly understood the price that is paid when international relations, international politics is approached as a war of all against all, as a zero-sum game," Breen added. "He clearly understood the idea of collective good. That it's a strategic victory when you can get a large number of countries to each put something into a system that benefits them all."

Truman then, and Trump today, share at least one common problem: North Korea.

In 1950, Truman plunged the U.S. into war after North Korea invaded South Korea. He fought as he preached. U.S. forces led a coalition of 16 nations under the umbrella of the United Nations.

But the war turned into a grinding stalemate and became unpopular in the U.S.

"Truman, of course, was pilloried at home," said Elizabeth Spalding. "Truman leaves office more unpopular than any other modern president, if you set aside Richard Nixon."

In the decades since, historians have rated Truman much higher than public opinion did at the time. He's widely recognized today for his role in creating the post-war world order, with the U.S. in the leading role.

Still, Trump is in effect dealing with Truman's unfinished business when he calls for a formal peace agreement between the Koreas and the withdrawal of the nearly 30,000 U.S. troops still in the South. And in Trump's attempt to shut down North Korea's nuclear program, he practices one-on-one summitry with Kim Jong Un.

Stephen Walt supports Trump's choice to pursue diplomacy with North Korea. But he's skeptical about where it will lead, and says it's critical that Trump not weaken U.S. bonds to key Asian allies such as South Korea and Japan.

"Unless one wants to cede most of Asia as a sphere of Chinese influence, maintaining those relationships is going to be more important in the future than it has been in the recent past," Walt said.

"What Trump advertised as a doctrine of 'America First' over time could turn into 'America Alone,'" he added.