Accessibility links
This Fashion Brand Grew On Instagram With Help Of Celebs, Relatable Models Fashion Nova was among the top-trending fashion brands online in 2017. How did a retailer with only five stores get so popular? Associating its brand with Cardi B and Kylie Jenner didn't hurt. 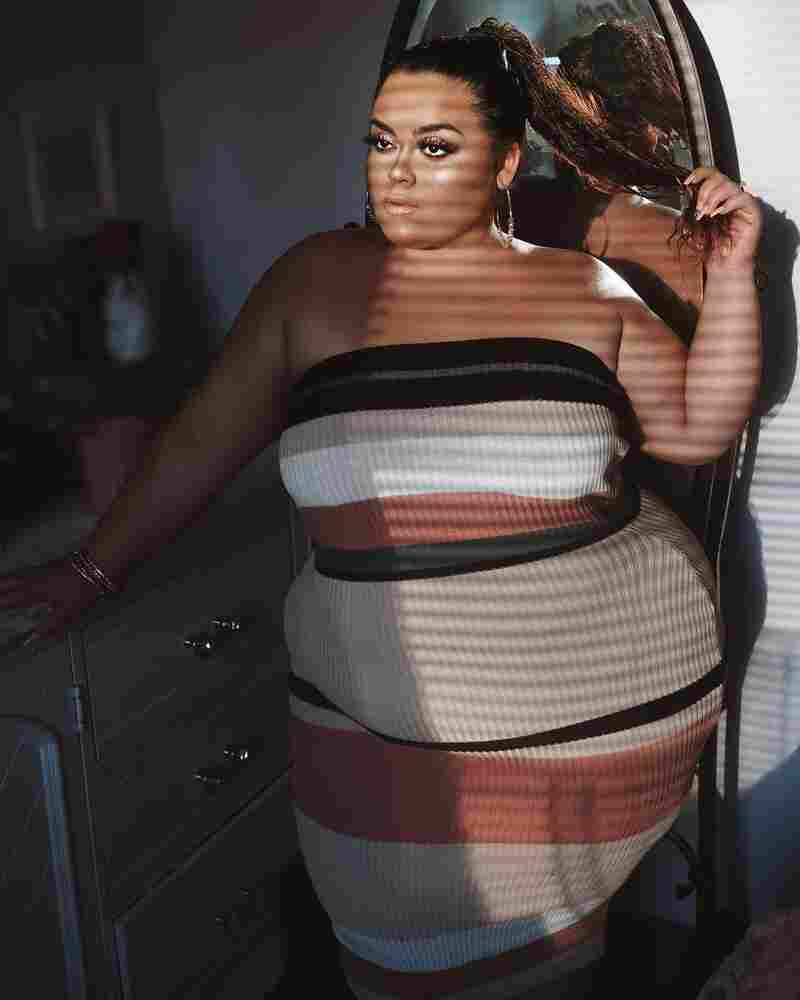 Growing up, Gabriella Lascano says she was told she should model. But all she could think was, "I'm fat. Like, models aren't fat." Now, she's an Instagram model for Fashion Nova. Antonio Foster/Instagram hide caption 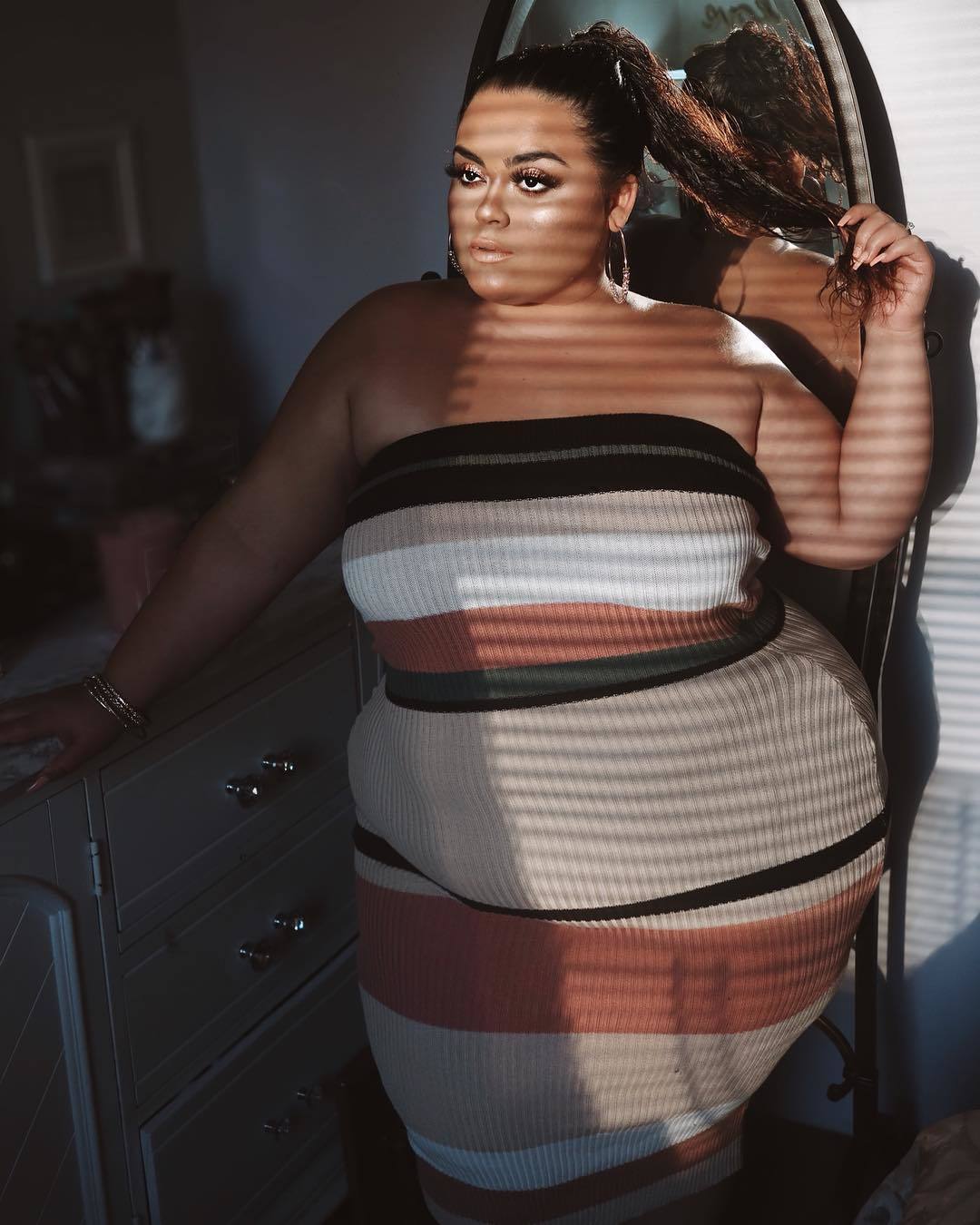 Growing up, Gabriella Lascano says she was told she should model. But all she could think was, "I'm fat. Like, models aren't fat." Now, she's an Instagram model for Fashion Nova.

If you've heard any of rapper Cardi B's recent string of hits, you know the woman has expensive taste. The Bronx-born star loves Balenciaga, Prada and Gucci. But true fans know that for years she's been one of the most visible spokespeople for a brand that's far more affordable: Fashion Nova, a popular retailer known for being sexy, cheap, and worn by celebrities.

The company came seemingly out of nowhere and is everywhere, online at least. Fashion Nova was among the 10 top-trending fashion brands last year in online searches, according to Google. A Fashion Nova spokesperson didn't reveal sales figures but says the company has seen triple-digit growth every year since it was founded in 2006.

The Business Of Being Cardi B

Fashion Nova's success comes at a time when brand loyalty is a difficult thing to achieve. A new NPR/Marist poll finds online shoppers are roughly divided when it comes to shopping for brand loyalty versus a good deal. Fashion Nova has achieved both, and the company has done it through a smart social media strategy.

The retailer invests little in stores (it only has five, all in California), and doesn't roll out massive advertising campaigns. It simply gets celebrities to wear its outfits and post the pictures on Instagram.

"Basically, they're doing nothing to promote their brand, aside from getting it into the hands of the hottest celebrities out there, like the Kardashians, Cardi B," says Gabriella Santaniello, a fashion industry analyst.

Of course, these days every brand wants you to follow them on social media. Fashion Nova was just an early adopter of social media, and has been incredibly successful at tapping into millennial neurosis: the obsession with seeing and being seen. The company understood that one selfie posted by Kylie Jenner wearing your dress translates into a legion of customers.

"Getting your product in the hands of an influencer is incredibly important," Santaniello says. "They have followers, and they're able to influence their buying decisions."

It helps that the price is right. Most of Fashion Nova's outfits cost less than $40. But it would be unfair to say Fashion Nova's success is predicated entirely on its prices and getting celebrity endorsements on Instagram. The company has also been savvy at filling a void left by high-fashion magazines and haute couture: It caters to curvy women and women of color.

Women like Gabriella Lascano. Growing up, she says she was told she should model, but all she could think was, "I'm fat. Like, models aren't fat."

These days, Lascano is a 27-year-old plus-sized Instagram model for Fashion Nova's Curve line. She has 220,000 followers. She's gorgeous, but also relatable, living a normal life in the Bronx.

She first gained some popularity on Instagram for her makeup tutorials. Then in 2016, Fashion Nova started sending her clothing. At her apartment in the Bronx, she pulls out a crate and shows some of the pieces to me: a black corset; an olive camouflage jumpsuit. Lascano says before she found Fashion Nova, it was very difficult to find plus-sized clothing that was pretty, or sexy. So she jumped at the opportunity to model for the company.

At first, she just got to keep the outfits she wore in the pictures. As her following on Instagram grew, Fashion Nova started paying. She won't say how much, but this is clearly her full-time job. She plans the locations and themes of the shoot. Her fiancé takes the photographs. She does her own hair and makeup, as well as the lighting and editing.

And while the end result is Lascano looking carefree and glamorous, her Instagram page is meticulously well planned out. She watches her audience numbers intensely — she knows their age, that most of them are women living on the East Coast. She and her fiancé are like a marketing team rolled into one. She even times her posts, to get maximum visibility.

Lascano has a face that is reminiscent of the supermodels of yore — long lashes and voluptuous hair a la Cindy Crawford or Linda Evangelista. But unlike those supermodels, who exuded an air of inaccessibility, she talks to her Fashion Nova followers constantly and responds to their adoring comments. This is not Twitter. There's no nasty trolling on her page. Instagram has a filter which allows users to block words from the comments. (Users can also mute words on Twitter.) Lascano's list of blocked words and phrases is long. She reads them to me, in a defiant tone. "Early death. Elephant. Everyone's lying to her. Fat. Fiona — you know from Shrek? People love that one."

Instagram And Shopify: How Businesses Are Targeting Your Feed

Even though she can't see those comments anymore, Lascano says being an Instagram model — and her own editor — can trigger a lot of insecurities. It's that millennial neurosis again: You aren't just watching; you are being watched. In high def.

But as Lascano scrolls through the comments section on her most recent post, her face lights up. "Beautiful girl. Que hermosa eres, which is 'you're beautiful' in Spanish. Slay. You look amazing. Where did you buy that bathing suit?" She laughs.