Accessibility links
First Ladies Unite Against Separating Children At Border All of the living former first ladies, and Melania Trump, have come out against the practice of placing children away from their parents at the border in an effort to curb illegal crossings.

Hillary Clinton (from left), Michelle Obama, Melania Trump, Rosalynn Carter and Laura Bush all have expressed their concern about migrant children being torn from parents at the Mexico border. AP hide caption

Hillary Clinton (from left), Michelle Obama, Melania Trump, Rosalynn Carter and Laura Bush all have expressed their concern about migrant children being torn from parents at the Mexico border.

First ladies have a long history of advocating for issues important to them, often issues related to children. But what's unusual is to have all the living former presidents' wives speaking out in one voice.

America's current and former first ladies are pushing back against the Trump administration's practice of separating children from their parents at the border in an effort to curb illegal crossings.

And they've largely been out in front of their husbands in doing so.

The opposition comes from both Republicans and Democrats — even including expressions of concern from President Trump's own wife, first lady Melania Trump.

In a statement, her spokeswoman Stephanie Grisham said the first lady "hates to see children separated from their families" and called on the country to govern "with heart." The statement also expressed hope for bipartisan immigration reform. Melania Trump has made the well-being of children the major focus of her "Be Best" policy initiative.

The responses from former first ladies, including Republican Laura Bush, have been more pointed. In an op-ed in Sunday's Washington Post and on Twitter, Bush called the separation of children from their parents "cruel" and "immoral."

I live in a border state. I appreciate the need to enforce and protect our international boundaries, but this zero-tolerance policy is cruel. It is immoral. And it breaks my heart.https://t.co/he1uw1E96A

The wives of former Democratic presidents have spoken out against the Trump administration's policy more quickly, and often more forcefully, than their husbands.

Her husband later retweeted her.

Former first lady and 2016 Democratic presidential nominee Hillary Clinton has repeatedly opposed the policy in multiple tweets in over the past few weeks. She has also encouraged her supporters to donate to immigrant-rights organizations.

Her husband, former President Bill Clinton, followed suit on Sunday with a Father's Day tweet, saying, "These children should not be a negotiating tool" in the immigration debate.

Rosalynn Carter, wife of former President Jimmy Carter, has also weighed in, issuing a statement on Monday calling the policy "disgraceful and a shame to our country."

The common message from the first ladies is rare, said Peter Slevin, a journalism professor and author of a biography of Michelle Obama. 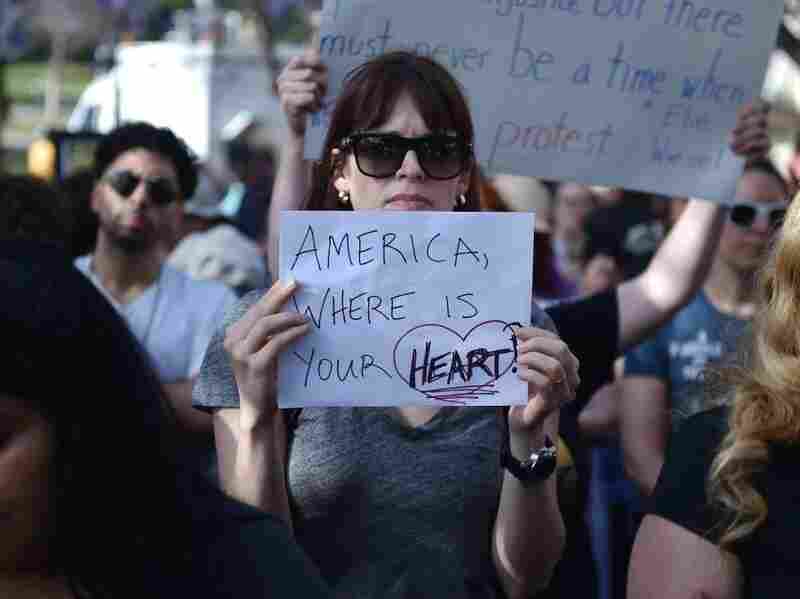 Critics of U.S. government policy that separates children from their parents when they cross the border illegally from Mexico protest in downtown LA on June 14. Robyn Beck/AFP/Getty Images hide caption 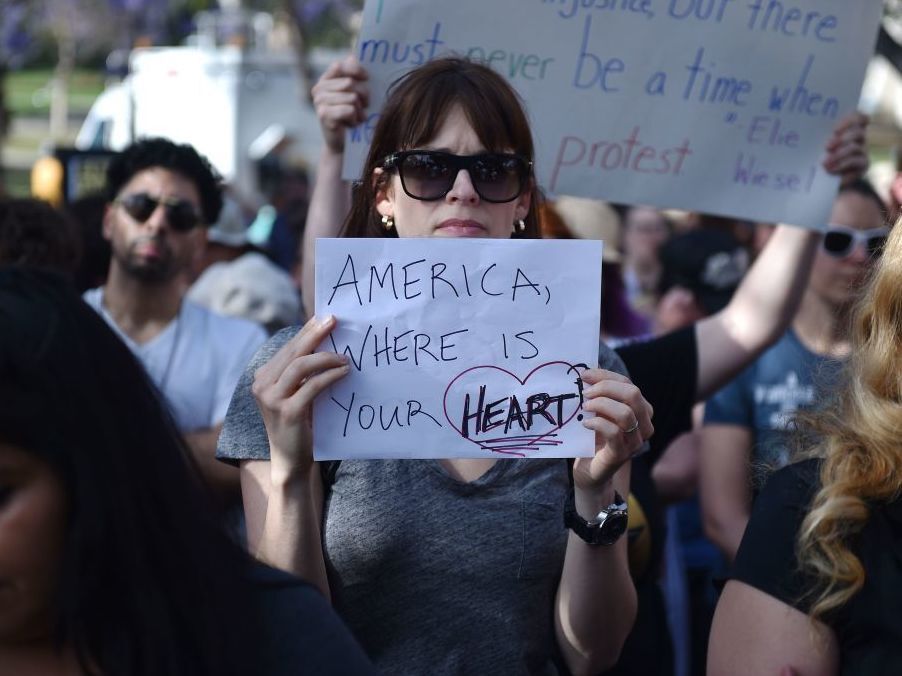 Critics of U.S. government policy that separates children from their parents when they cross the border illegally from Mexico protest in downtown LA on June 14.

"When was the last time Laura Bush, Rosalynn Carter, Michelle Obama and Hillary Clinton spoke out, in one voice, on anything?" Slevin said in an email to NPR. "Each of these former first ladies uses her megaphone in a different way, when using it at all. It's extraordinary that they're united in attacking a highly politicized policy of a sitting president."

Slevin added, "When Melania Trump calls on the country's leaders to govern 'with heart,' it certainly suggests greater solidarity with her predecessors than with her husband."

The big question is whether these bipartisan expressions of concern from former first ladies, and Melania Trump herself, will have an impact on policy. Dr. Jeanne Abrams, an author and historian of first ladies at the University of Denver, noted that first ladies often have been "sounding boards for their husbands' thinking and often were ahead of the curve before their husbands on social issues."

For example, she said, Abigail Adams wrote a letter to her husband, President John Adams, advocating for women's rights; Eleanor Roosevelt was known for her advocacy for civil rights before her husband embraced the issue.

"With intimate access to the ear of the president, first ladies have often slowly but determinedly pushed their husbands to moderate their positions. Melania Trump is not unusual in this, but President Trump appears to be more implacable than many of our former presidents," Abrams said.

The current and former first ladies' opposition to separating families is in line with that of American voters; polls show that a majority of Americans oppose the policy, with Democrats overwhelmingly against it and opinions among Republican more mixed.