Accessibility links
Trump Visits Hill Republicans, But Passage Of GOP Immigration Bills Uncertain Trump's meeting on Capitol Hill with House Republicans was seen by many members as a critical opportunity for Trump to convince conservatives in particular to back the compromise bill. 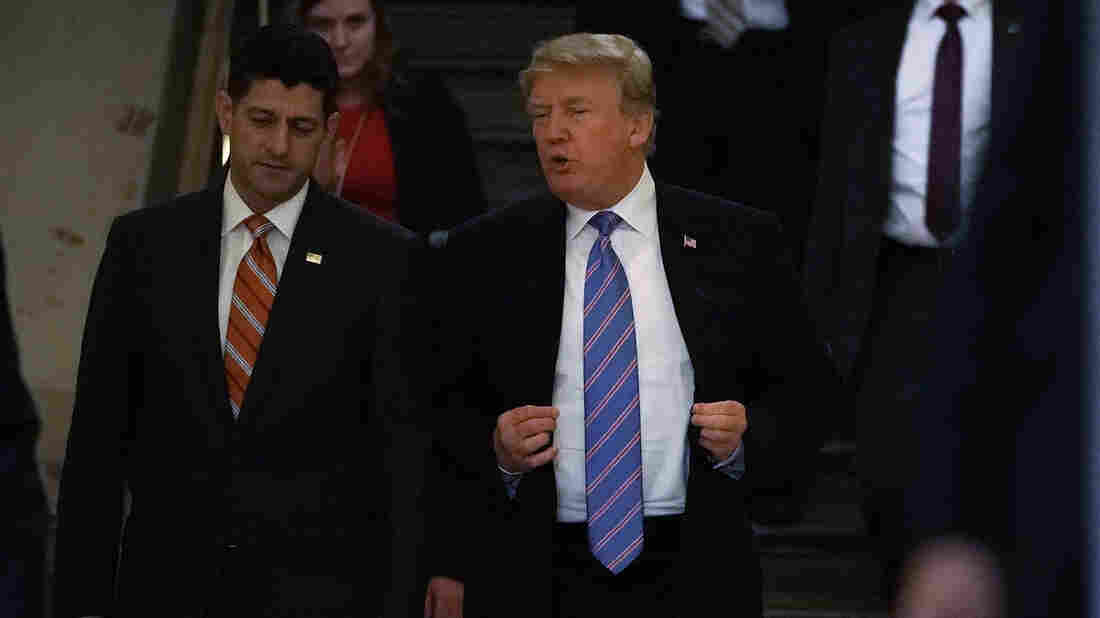 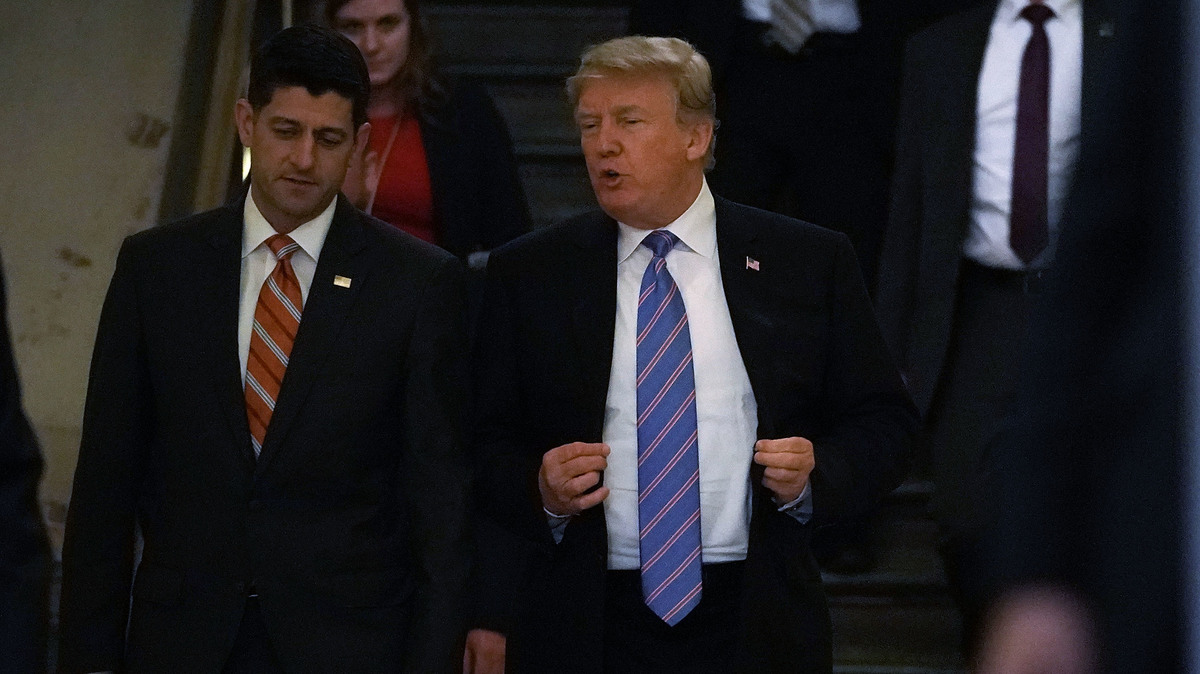 President Trump told House Republicans that he will support them "1,000 percent" in their efforts to pass immigration legislation later this week. Republicans left the wide-ranging talk in the Capitol in good spirits but still unsure if they have the votes to pass a bill.

Members emerged from the evening meeting with a range of opinions about what Trump would support. Some said they were confident Trump specifically endorsed a compromise between moderates and conservatives to address both legal and illegal immigration. Others thought Trump signaled he would vote for anything Congress can pass. House Republican Conference Chairwoman Cathy McMorris Rodgers, R-Wash., said Trump supported them more broadly.

"The president laid out his vision for immigration reform, the importance of taking action — the kids and separation at the border that's ongoing," McMorris Rodgers said. "He's behind us."

McMorris Rodgers said Republicans are focused on passing a bill this week. The goal has taken on greater urgency amid national outrage and concern over a White House policy of separating migrant children from their parents at the U.S.-Mexico border amid widespread condemnation of the practice.

House Republican leaders are working to add new language to their legislation to require that minor children be allowed to stay with their parents throughout immigration proceedings at the border. That bill has not been finalized but leaders hope to vote on it later this week, along with another more conservative option.

House GOP leaders planned to canvas members to see where support is for the version they crafted in hopes of holding votes on Thursday.

Louisiana Republican Rep. Steve Scalise, the leader tasked with rounding up votes, told reporters: "I want to see us pass this bill and let the Senate have the opportunity to take it up as well and solve the problem. We want to secure the border. We want to reunite kids. Our bill does just that."

Most Republicans said they were pleased with Trump's message, including some of the moderates who launched the House immigration talks last month in order to give legal protections to immigrants who are in the country illegally after being brought to the country as children, known as DREAMers. Florida Rep. Carlos Curbelo, one of the leaders of the group, said Trump's speech was positive but wasn't sure if it was enough to close the deal with his colleagues.

"I think he was explicit in that he was going to support House Republicans who take a risk and vote for meaningful immigration reform," Curbelo said. "So, we'll see."

White House spokesman Raj Shah, in a statement after the session, attempted to clear up any confusion, and stressed that Trump endorsed both proposals.

"The President spoke to the House Republican conference on a range of issues," Shah said. "In his remarks, he endorsed both House immigration bills that build the wall, close legal loopholes, cancel the visa lottery, curb chain migration, and solve the border crisis and family separation issue by allowing for family detention and removal."

Members said the range of issues Trump covered included trade, taxes and other victories for the administration. Several people who were in the room said Trump told them that his daughter Ivanka spoke to him about needing to address the family separation issue.

"He mentioned that his daughter Ivanka had encouraged him to end this and he said he does recognize that it needs to end, that the images are painful," Curbelo said. "He discussed the optics and the policy itself and I think he's not comfortable with either."

The meeting was seen by many members as a critical opportunity for Trump to convince conservatives in particular to back the compromise bill. Many still support a hard-line conservative proposal written by House Judiciary Committee Chairman Bob Goodlatte, R-Va., that is expected to fail.

Despite the meeting with the president, some members remained wary of supporting any immigration bill following a chaotic week during which Trump appeared to switch his position on immigration several times.

Some members fear that Trump has a mercurial history of supporting legislation, like the omnibus spending bill earlier this year and health care bills in 2017. In both cases, the president declared he backed certain policies, only to turn around later and blast the same idea — and those who voted for them — on Twitter.

That lack of confidence and fear of retribution could make it significantly harder for Republicans to pass any politically risky immigration proposals ahead of the midterm elections in November.

The meeting capped a day of disarray and confusion among congressional Republicans over how to handle the growing outcry over the White House "zero tolerance" family separation policy.

In addition to the House GOP immigration bills, Senate Majority Leader Mitch McConnell, R-Ky., told reporters that he wants to pass narrow legislation to address just family separation — and not a broad immigration plan as is being discussed in the House.

"In order to fix this problem you can't fix all the problems," he told reporters. "We've wrestled with this issue for a decade."

McConnell didn't provide any specifics of any potential bill. Senate leaders are working through various proposals to find consensus as more and more Republicans are speaking out in sharp opposition to Trump. It is one of the rare instances where Republican leaders in Congress have been willing to publicly rebuke the president on policy and actively consider legislation to oppose him.

Earlier in the day, Trump further complicated the process when he seemed to say he would still make changes to the House legislation during a speech at the National Federation for Independent Businesses.

"We have one chance to get it right; we might as well get it right or let's just keep it going, but let's do it right," Trump said. "We have a chance."

"What I'm asking Congress to do is to give us a third option which we have been requesting last year," Trump said. "The legal authority to detain and properly remove families together as a unit."

NEWS: Senator Hatch plans to send a letter to the Justice Department later today calling for a pause on family separations until Congress has time to pass a legislative solution to this issue.

Many in Congress, including many Trump supporters, say he is wrong. A growing number of Republicans have pushed back, including Sen. Orrin Hatch, R-Utah, who sent a letter to Attorney General Jeff Sessions urging him to suspend the policy immediately to give Congress time to address the issue.

"Although enforcing our immigration laws is an essential responsibility of the federal government, it must be done in a way that is consistent with our values and ordinary human decency," the letter stated.

Twelve other Senate Republicans signed on to Hatch's letter, including Cory Gardner of Colorado, Dean Heller of Nevada and John McCain of Arizona.

The letter takes direct aim at Trump's argument that Congress is to blame for the separations. "The immediate cause of the crisis is your Department's recent institution of a 'zero tolerance' policy under which all adults who enter the United States illegally are referred for prosecution," it read.

The clash between Trump and congressional Republicans makes it increasingly likely that Republicans will need to work with Democrats if they want to pass a bill that could overcome a presidential veto. But Senate Minority Leader Chuck Schumer, D-N.Y., said Tuesday that Trump should resolve the policy on his own.

"Mr. President, you started it, you can stop it, plain and simple," Schumer told reporters.

A previous photo caption incorrectly referred to a meeting between President Trump and members of Congress as having taken place on Tuesday. The meeting in the photo actually occurred in January.