Accessibility links
Rainn Wilson On 'Permanent' And Life Post-'Office' : It's Been a Minute with Sam Sanders It's Tuesday: Wilson's latest film, 'Permanent,' is about embracing the weirdness of your own family. He also opens up about religion, struggling as a young actor in New York and — of course — 'The Office.' Email samsanders@npr.org and tweet @NPRItsBeenAMin with feels. 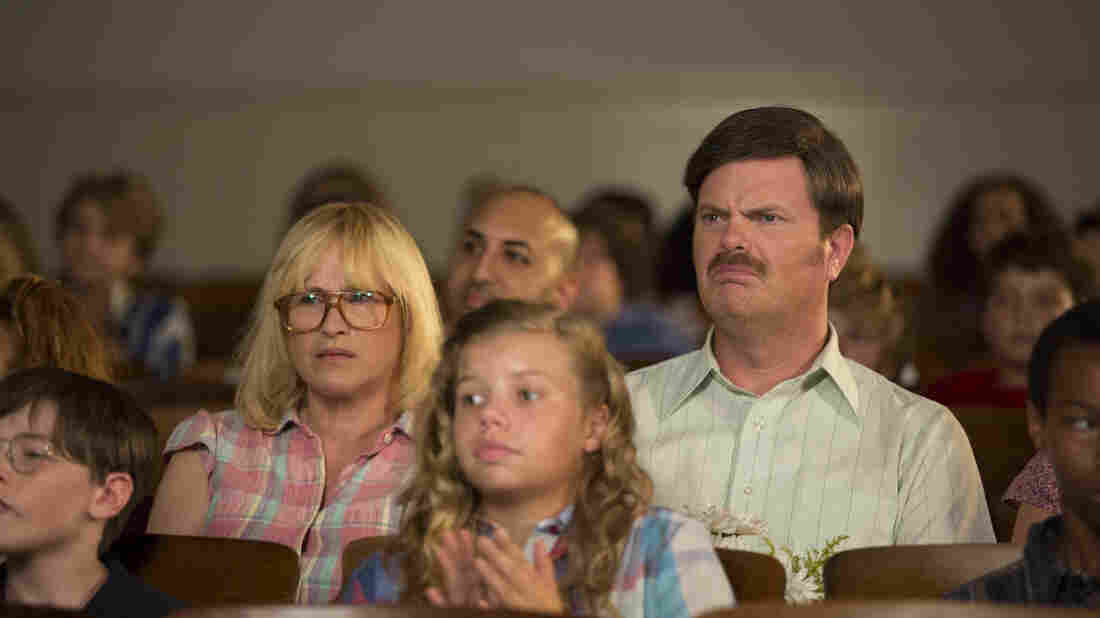 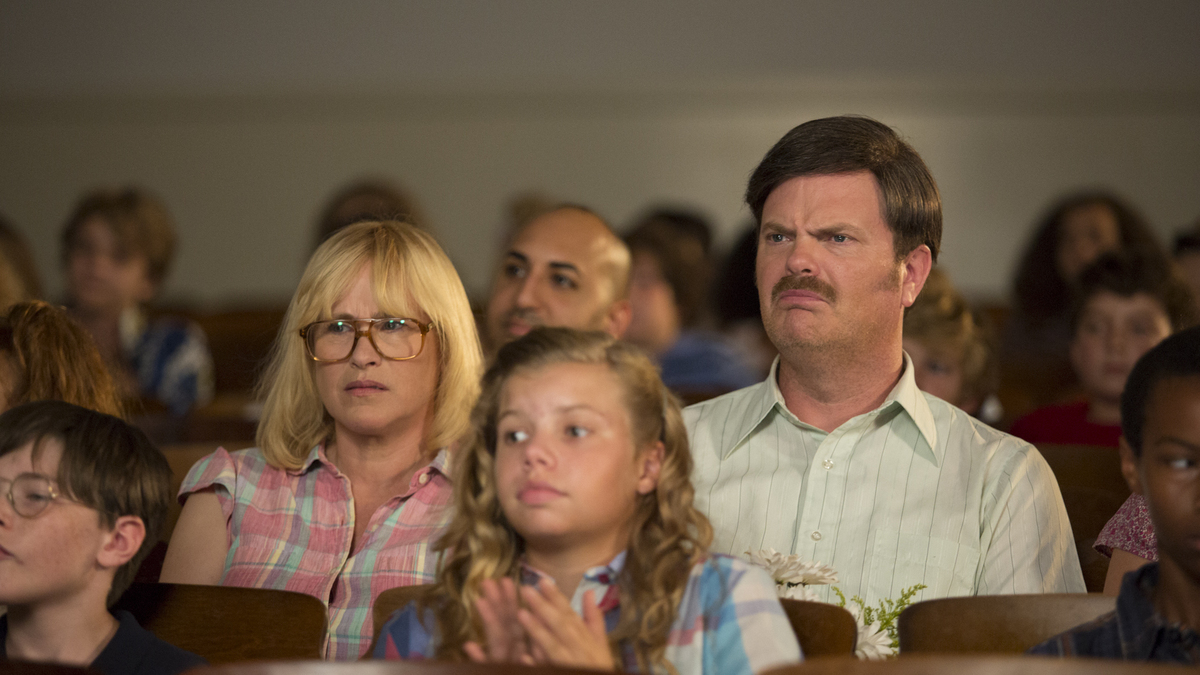 Rainn Wilson is no stranger to strange families.

Raised in suburban Seattle, his father was an abstract painter who worked at a sewer construction company. Rainn played the bassoon. And he was raised in the Bahá'í faith, whose followers believe there is only one God, and that all religions basically worship a version of that God.

"Definitely people thought, 'what is [Bahá'í], that's crazy, that sounds weird'," he told Sam. "But no one treated me bad for it. I was fortunate in that way."

It was possible, then, for Rainn to be aware he was different but to feel at home in that difference. That's the struggle we see play out in his latest film, Permanent, a comedy co-starring Patricia Arquette about an outcast family trying to come together.

"I love it so much," Rainn said, "because it captures my reality, in the 80s, of having a really quirky, dysfunctional family with its own set of strange rules about how things work."

Rainn talked to Sam about those rules, how his faith informs his work on-screen and off, and about life after leaving perhaps the most famous dysfunctional family Rainn will ever know: the Dunder Mifflin Paper Company of Scranton, Pennsylvania.

On Permanent, out now on video/on-demand, and the film's themes

It's about finding family, and it's about no matter how outcast you are, there are other outcasts to bond with. I think some of the best comedy and drama comes from that search for the unlikely family coming together.

And that was my story. I had a very strange family. We were members of the Bahá'í faith and my dad worked at a sewer construction company, but he was an abstract painter, so he couldn't wait to get home and paint giant canvasses. He also wrote science-fiction books.

And my step-mom, who helped raise me, she was more of a housewife but very odd in her own way. It was just the three of us — pretty broke — and we drove an old Ford Pinto and lived in a little concrete rental house. And a lot of my suburban Seattle friends — their parents had nicer cars and bigger houses and went skiing on the weekend.

But that story of embracing the inner-weird of the family, I think, is universal.

On his Bahá'í faith

Bahá'ís believe that there's only one God, and that all of these religious faiths on the planet are worshiping the same God. They might call him Allah, or the Great Spirit, or Jehovah, or whatever — but there is only one creator. And this creator educates humanity by sending specially-appointed divine teachers down every five-hundred or thousand years or so. But they're all coming from the same source and essentially delivering the same message.

So Krishna, and the Buddha, and Abraham, and Moses, and Jesus, and Muhammad — you can certainly look at some things that are quite different about their faiths. [But] most of [those differences] arose in the hundreds of years after the creation of the faith. If you look at the essential message of those divine teachers — it's very much love, unity, work together, don't get attached to material things, grow your soul, essentially.

The Bahá'í faith is quite simply that we're world citizens and that it is our spiritual responsibility and journey to try and make the world a better place. Bahá'u'lláh, the founder of the Bahá'í faith, says "Be anxiously concerned of the needs of the age ye live in."

On how Soulpancake grew out of his faith

It's very Bahá'í inspired in that the most important principal in the Bahá'í faith is unity. And what unifies us are our common elements of being a human being. What we see right now are greater and greater factions, and disunity, and silos. And I think this will continue to get worse. So we're simply trying to say, 'We are all human beings on this planet. We sure could use some uplifting messages that could bring us together.'

One thing that's great about [Soulpancake YouTube channel] is we go to red states and blue states and people of faith and people of non-faith and city people and country people. We really have a diverse crowd on our channel.

On how The Office would be received today, and missing the show

I think The Office would get hit by the right and the left if it were made today, in the same way that All In The Family couldn't be made today. Like 'diversity day.' It couldn't fly today.

I do sometimes [miss The Office]. I really miss collaborating with an awesome group of people — the writers were fantastic — and taking a scene and trying to bring it to comedic life. We always made sure that the scene kind of tickled us in some way. It's digging into the dough and kneading the dough and being in the kitchen and cooking that stuff up. I don't know that I'll ever have that experience again the way that we had it on The Office.

I remember early on, when we shot the pilot, we had lunch, and Steve Carell did a little toast. He said, 'You know, guys, this is probably going to be the job that we're known for for the rest of our lives.' And this was 2004.

And all of a sudden, in season two, we started to take off.

It's a struggle. I'll be honest with you, it's a struggle being known as Dwight — playing an iconic character.

I did theater for ten years before I even came out to LA. In New York, and the regions, and tours, and Broadway, and off-Broadway. I was doing experimental theater and Eugene O'Neill and Shakespeare and all kinds of different things. And then I stumbled into doing comic characters. But because Dwight was kind of broad and a little off-center, I think a lot of people in show biz think that's all I do and that's all I'm capable of doing.

So it has been a bit of a struggle to try to educate people on some different facets of me as an actor. But fortunately I made some money doing [The Office], so I get to kind of pick and choose a little bit more, and I get to do movies like Permanent. It's both a challenge and a great opportunity.

On living in New York as struggling actor

Eighty-six through ninety-nine. I lived in an abandoned beer brewery. This was in the far reaches of Williamsburg, almost to Brownsville. We have no heat, no running water, there were rats, we had no shower, but I had free rent.

The landlord was the crazy Dutch guy, who had this thick Dutch accent: 'I'm going to turn this beer brewery into artists' lofts! But you move in, you be artists here, live for free, and then when I fixing up, I show people, look, we got artists living there!' So we were guinea pigs.

I remember once being on the phone, and I had my parka on because it was so cold, and I was talking to my mom, and I remember spitting on the floor and watching my spit freeze.

On reacting to pushy Office fans in public

I've certainly, in a bad mood, been rude sometimes. What's interesting if you've been on a TV show, is people think they get to touch you. They just come up and touch me. They'll grab my hand or my arm or they'll put their arms around me. It's like one of those Disney characters — it's like when you see Minnie Mouse at Disneyland. And kids run just run up and just hug.

My favorite thing is whenever they're like, 'You know that show, The Office?'

And they're very perturbed.