Accessibility links
'The Boyfriend Bracket' Isn't What You Expect — But It's A Winner Kate Evangelista's new book is called The Boyfriend Bracket, but it's done with the titular bracket in just a few chapters, becoming a sweet story about a high-school senior and her childhood crush.

'The Boyfriend Bracket' Isn't What You Expect — But It's A Winner

'The Boyfriend Bracket' Isn't What You Expect — But It's A Winner 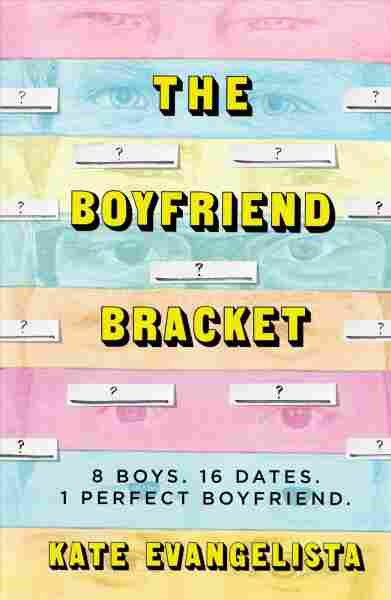 The short version: I loved this book! I was also very confused by this book.

The longer version: I was intrigued by the title of Kate Evangelista's new book The Boyfriend Bracket. The tagline on the cover read like a movie poster, "8 Boys, 16 Dates, 1 Perfect Boyfriend."

In a bracket-smashing year like 2018, even the most sportsball illiterate of us [points at self] became familiar with March Madness after 16th-seeded UMBC's upset over number one ranked University of Virginia. I imagined that this book would feature one quirky girl named Stella, at least eight (thank goodness it wasn't 16!) guys of diverse backgrounds and interests, and 16 dates filled with awkwardness, mishaps, a little fun, and maybe even a little magic. Who would Stella take to Homecoming in the end? I was ready to be surprised! (While also hoping there wouldn't be so much sports jargon that I would get lost.)

That was not this book. My surprise, it turns out, was that the whole Boyfriend Bracket idea was suggested, executed, and over and done with in about 60 pages.

Here's what this book is actually about: Extremely confident fashion designer Stella Patterson is about to start her senior year. She teams up with her BFF Franklin Park (also a budding fashion prodigy) on a ridiculous plan to find herself a boyfriend for this last year of high school. Because not only is she getting rid of her braces and cutting her hair and coming out of her shell, she's also vowed to get over the lifelong crush she's had on her brother's best friend, Will Montgomery.

Before 'Love, Simon': Coming Out And Coming-Of-Age At The Movies

Will is starting his first year at UCLA. He's also secretly written a very popular web comic that's getting noticed by major agents and publishers. The main character in this comic is Morla, the Witch Hunter. Based on Stella, of course, because he's had a crush on her for quite a while now too. The one thing standing in their way? Stella's brother, Cam. Since their father died, Cam has become overprotective if his little sister. No one man will ever be good enough for her — including Will.

So the book that had me worried I was going to need to Wikipedia a crash course in basketball turned out to be a fabulous first love drama between a young fashion designer and her comic-book-creating childhood crush. Have I mentioned I'm a geek who's been attending SF conventions for over twenty years? Costumes and comic books are my wheelhouse, baby!

I read it all in one sitting — the book went by so fast that I was finished by lunchtime. I wanted to see every dress that Stella made to wear to every school gathering. I wanted to flip through the portfolio she sent to Parsons as her college application. I even Googled the famous Carrie Bradshaw Versace ball gown. By the end of the book, I was so wrapped up in the fashion competition that I wanted to pop popcorn and watch After the Ball and The Dressmaker all over again.

I read the last page with a satisfied sigh — and a brow wrinkle of confusion. I wanted to hear more about Stella's relationship with her family, beyond the fabulous Filipino dishes her mother makes at every featured meal. I wanted to hear more about Will's comic book (and why, even after selling it to a major publisher, he was still inking his own panels). I wanted to know a lot more about Franklin, whose character sparkled on the page. I got why there was a Pygmalion moment in the story, but I wasn't sure what purpose the high school bullies served. Nor did I understand the point of the Boyfriend Bracket. Which wouldn't have been a big deal, if it hadn't been the title of the book.